Two days in Hoi An

Everything Brussels Reizen Asia Vietnam Two days in Hoi An

Two days in Hoi An

Listed as a UNESCO World Heritage site, Hoi An is an adorable village by the riverside featuring beautiful French-style buildings, Japanese temples and pagodas, lots of lanterns and great food. It is also famous for its many tailors that can create any fashion items exactly the way you want them. 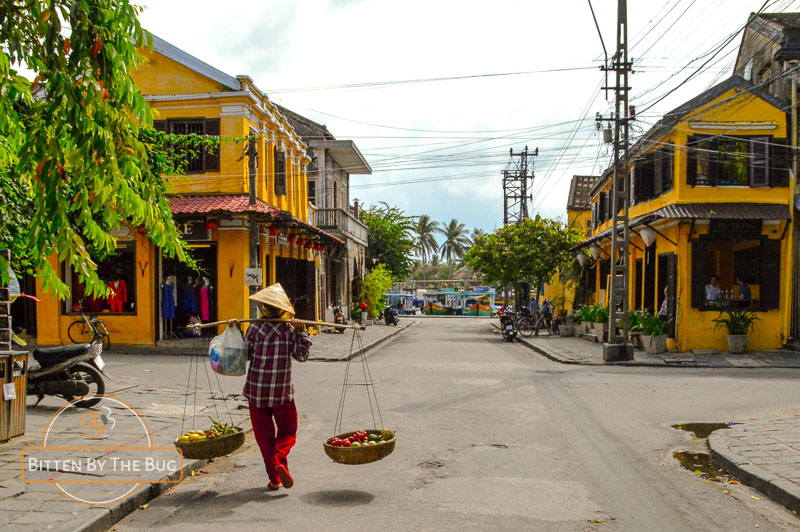 Our tailor experience in Hoi An

As a former major trading port, Hoi An is still famous for its silk supply and numerous tailors. Given that we were traveling through the entire country in just a few weeks and only had two days for Hoi An, we were afraid we wouldn’t have enough time for tailor-made clothes. Almost upon arrival, we headed to some tailors we’d read good reviews about, compared their rates and finally decided to place an order with Mr Xe. We gave them a photo of the dress and skirt we had in mind, upon which they started measuring us up. Then we still had to pick a fabric, and that was it. They would start working on it right away, and we were invited to come back in the evening for a first fitting. My dress was a bit too long at the knees and needed a larger décolleté, but looked great already. I was less satisfied about the skirt: the folding was weird and it was much longer than the example I’d given them. The day after, we went back for a second fitting: the dress was alright, but the skirt still wasn’t. After a third fitting finally, everything fit nicely and we took our new clothes home.

With all those tailors lining the streets, it’s hard not to be window-shopping all the time. Having seen so many pretty sandals, I couldn’t resist any more and walked in with another shoe maker. They already had the model that I wanted, so they only had to measure up my feet and asked me which material I wanted. A few hours later, my new leather sandals were ready. 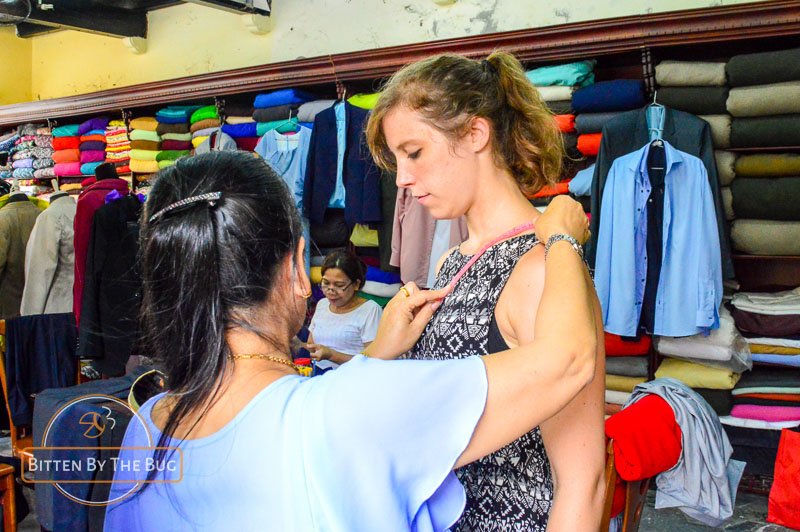 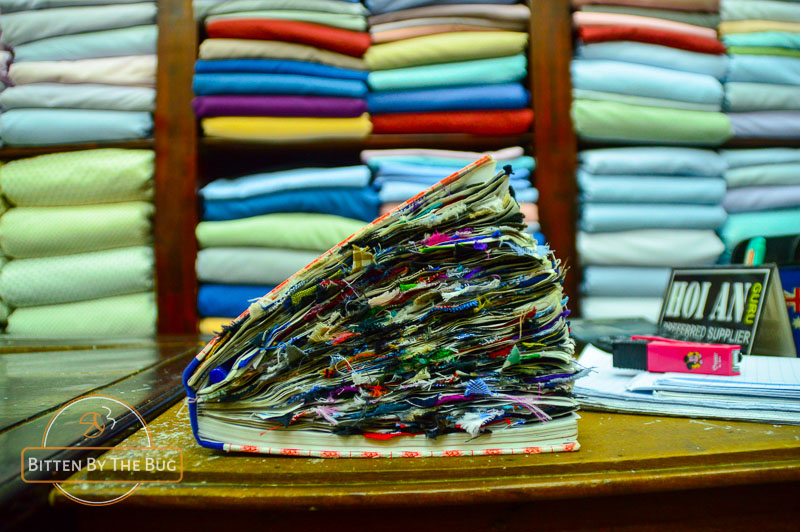 Exploring the ancient town of Hoi An

The center of Hoi An is dotted with temples, pagodas and shrines. One of the most spectacular temples is the Quan Cong temple built in the early 17th century in honor of the Chin dynasty. There are also many old houses that belonged to wealthy merchants from the colonial period, the most famous of which are Tan Ky and Duc An. 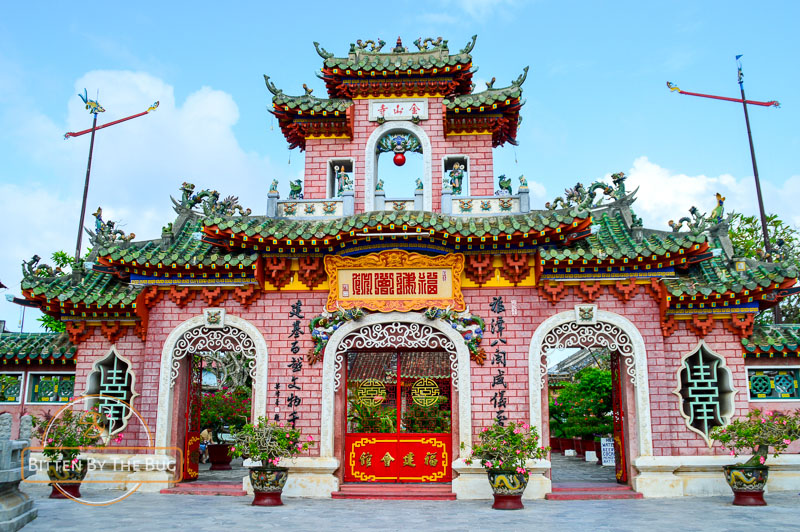 Another famous landmark in Hoi An is the Japanese Covered Bridge built by the Japanese community. It's especially pretty at night, when it’s lit up by lanterns. 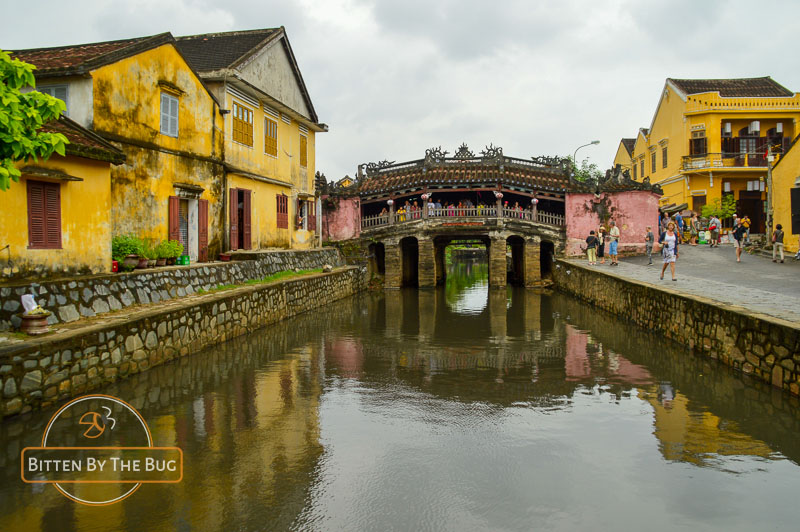 The streets are lined with stringing lanterns, which are lit up after nightfall. At night there's also a lantern market with hundred of brightly colored lanterns, which create a magical setting. Along the river, some ladies were selling little paper boats in which they put a candle before sending it down the river. My friend has promised me a cake with candle for my birthday and decided to enjoy the opportunity to already give me candle now. So, while making a wish, we both sent down our little candle boat down the river.

It turned out we had arrived during the Full Moon Festival, held on the 14th day of the lunar cycle every month. Is this why there were so many lanterns everywhere? 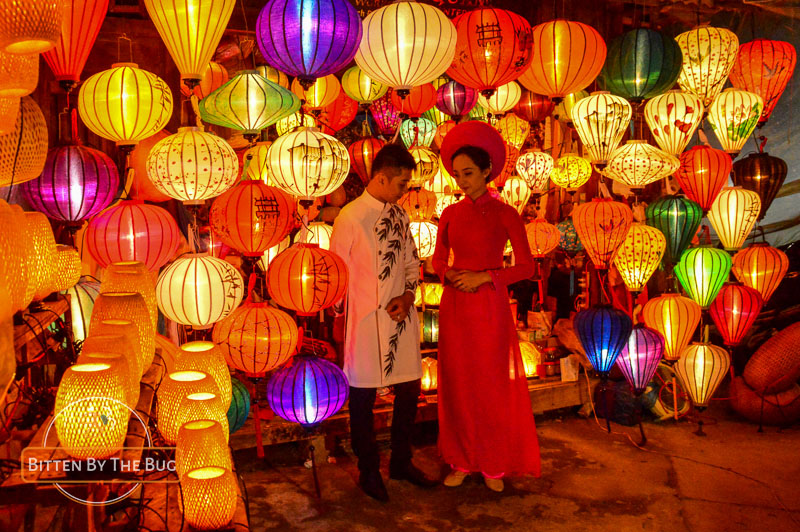 Feeling extremely hungry, we quickly settled for a tourist restaurant close to our hostel. Unfortunately, the food was average and the portions were small... Lesson learned. The day after, we went to the central market on the riverside, where locals gathered around small food stalls. This is usually a good sign and that was also confirmed by the great food. After dinner, we shopped around for fruit, spices, souvenirs…

Almost on every street corner in Hoi An, street vendors are selling local specialties. We tried some mango cakes and fried pastry with green and red beans, which were pretty good. Hoi An is also famous for its banh mi: a baguette with meat or chicken, cheese, vegetables and a spicy sauce. The recipe is pretty simple, but there’s something about the sauce that makes it so delicious. The most famous banh mi place in Hoi An is called Banh Mi Phuong and we would’ve returned for breakfast, lunch ánd dinner if there weren’t so many local dishes we had to try.

Here’s a little food checklist of items you’d have to taste when in Vietnam: 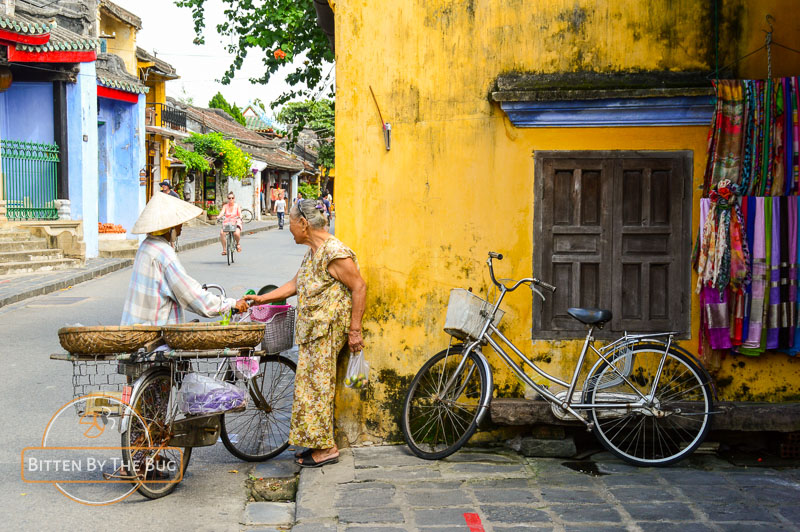 We signed up for a free bike tour offered by a group of students from Hoi An. In the morning, we put our bikes on the ferry which took us to a countryside village on the other side of the river. Our first stop was a boat factory where we learned about the boat making process. Apparently, for Vietnamese it’s cheaper to buy a boat than a car. Our second stop was at a house where mother and daughter were weaving a reed mattress. They told us that Vietnamese don’t like sleeping in a soft bed and rather prefer this kind of reed mattresses. When we reached a local temple, our guides instructed on the difference between temples and pagodas. From the outside they can may alike, but when it worships the ancestors, it’s a pagoda. When it’s dedicated to Buddha, you call it a temple and you should cover up your shoulders when entering. We hopped by a local house where we watched how they make noodles: they use some kind of rice water to make pancakes, which they then shred into fine strings. Finally, we ended the tour in a shop with wooden figurines.

Although we like the initiative taken by the students to do tours and practice their English in the process, we thought the tour was a bit cliché and felt less authentic than we had hoped for. 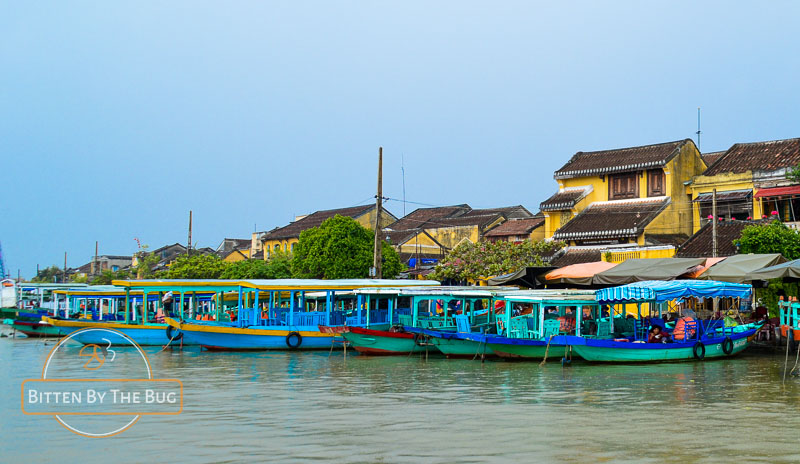