We had already seen The White Stupa the day before, but we hadn't seen it at sunrise, so we went back a second time... at 4h30 in the morning! In a miraculous way, all members of our group had managed to get out of bed on this ungodly hour, so six sleepyheads jumped into the car and drove back. The light conditions were so much better today, turning the White Stupa into an even more beautiful place. Suddenly, it wasn't that hard anymore to keep our eyes open. 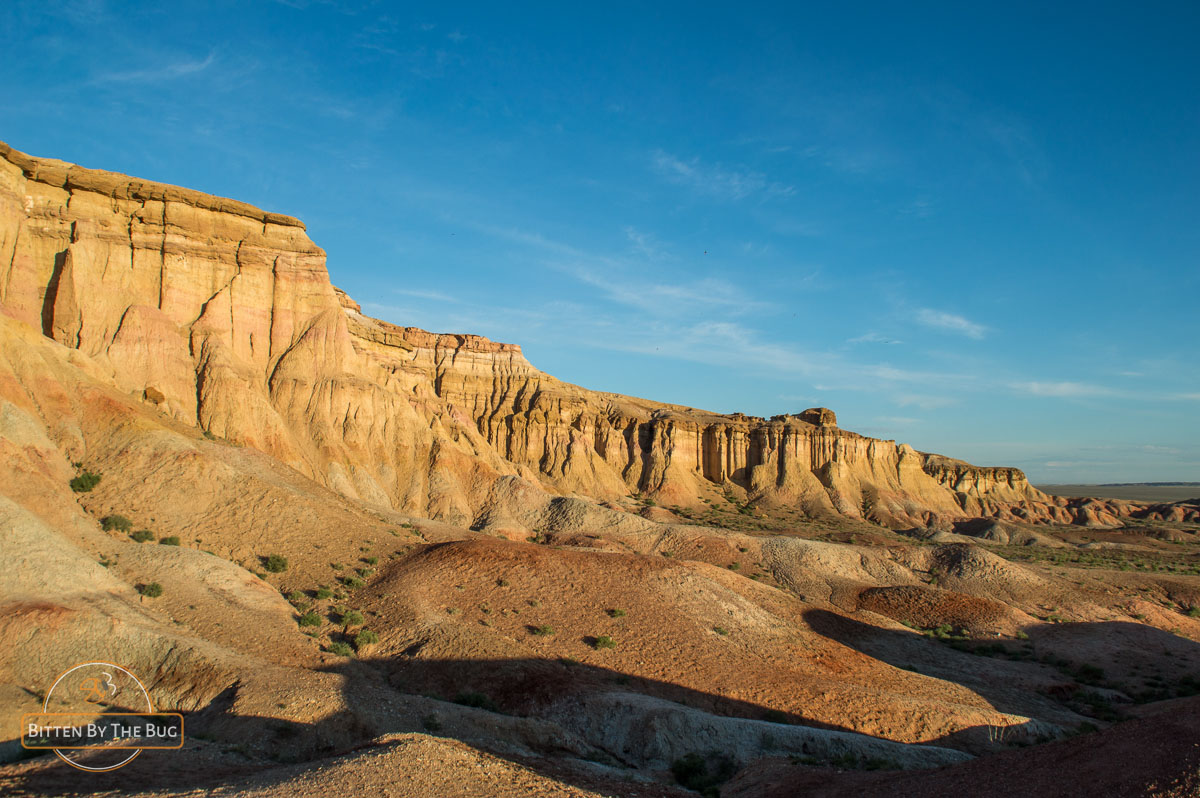 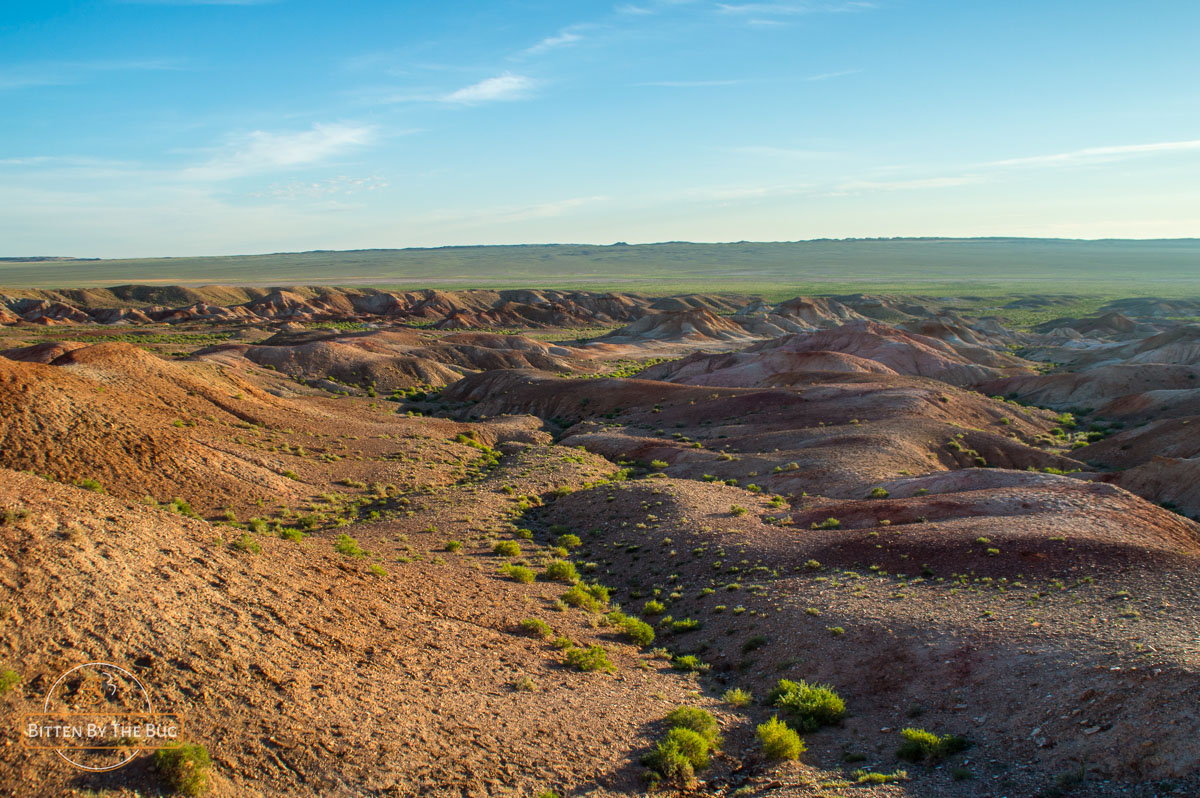 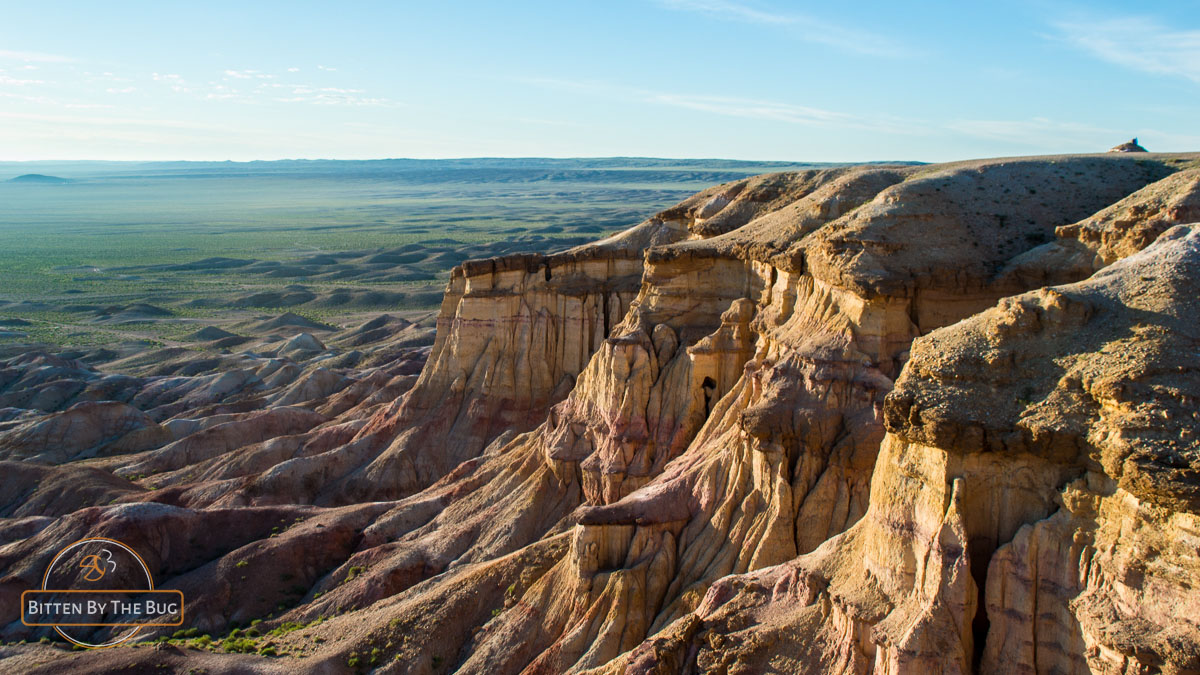 As soon as we got back at the ger, everyone returned to bed, until our guide Jessica woke us up. Breakfast was a feast today; we received slices of bread with fried egg, chocolate paste and jam. I know that the menu doesn't sound very extravagant, but I was already missing food from home and this came close.

Then it was time to get back on the road. Having completed the introduction rounds on day 1, we turned to silly car games on day 2. Each in turn, we alphabetically named countries, cities and brands until we ran out of things to name.

We briefly stopped for a picture of a herd of goats that was crossing the road. Groups of animals crossing -or even blocking- the street would become a daily view on this tour. Apparently, goats, horses, camels, sheep, cows... are free to roam half of the year and during the other half of the year, they can be consumed by nomads.

We also saw nomads herding their animals... on a motorbike. I have my doubts on the effectiveness of this method; the guy on the motorbike seemed to be scaring the animals away instead of keeping them together.

In the village of Dalanzadgad, we stopped for grocery shopping. The day after was one of group members' birthday, so we secretly stocked up on booze and cake, then drove on to our new ger camp for the night. Which had showers! They used solar panels to heat the water and the sun was going down already, so we all hurried to shower before running out of hot water.

Feeling clean again, we had dinner (vegetable soup with beef) in our guide's ger. Funny about this ger was the huge stone that hung from the ceiling in the middle of the ger. We learnt that this is done for stability, to prevent the ger from being blown away.

In our own ger, I was a fan of the furniture. The bed frames were all painted with colorful motives. The cheerful design and drawers made them look like cabinets instead of beds.

Just before sunset, we headed out to the Flaming Cliffs, locally known as Bayanzag. This site has become famous thanks to explorer and paleontologist Roy Chapman who made a very important discovery here and named the site 'the Flaming cliffs' after its vivid orange colours. 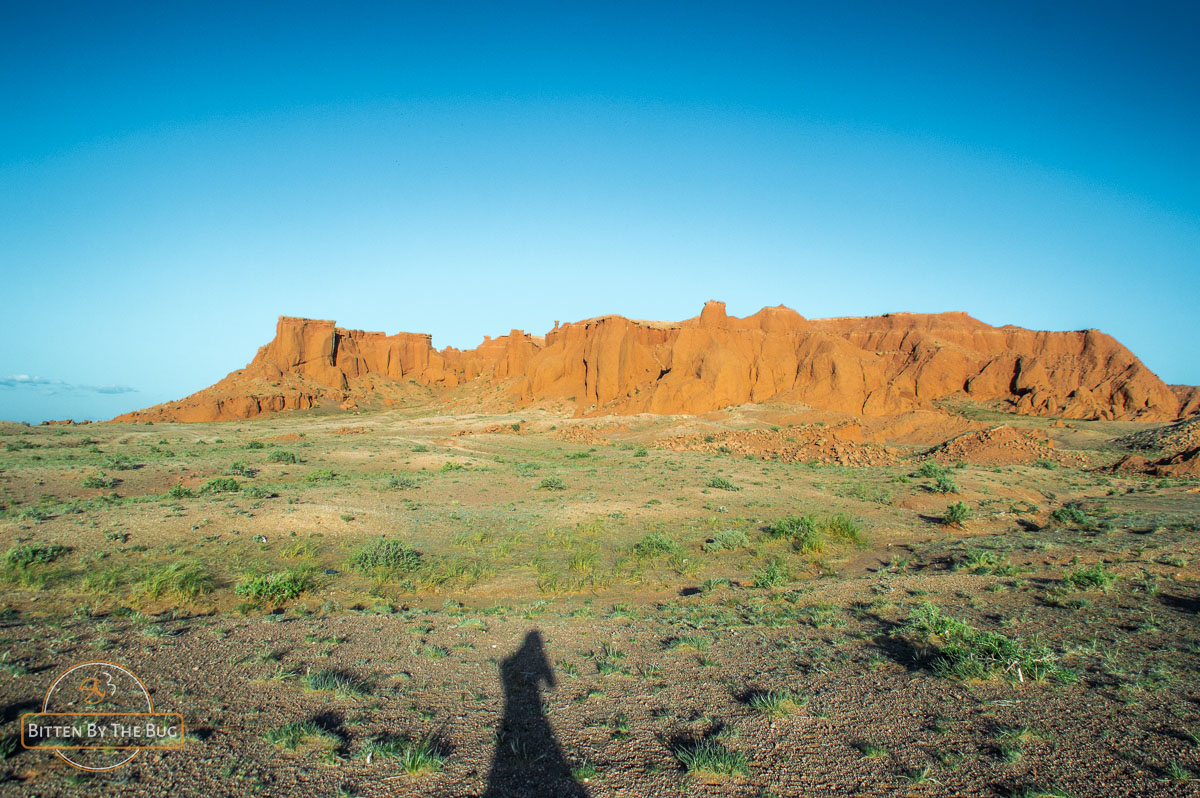 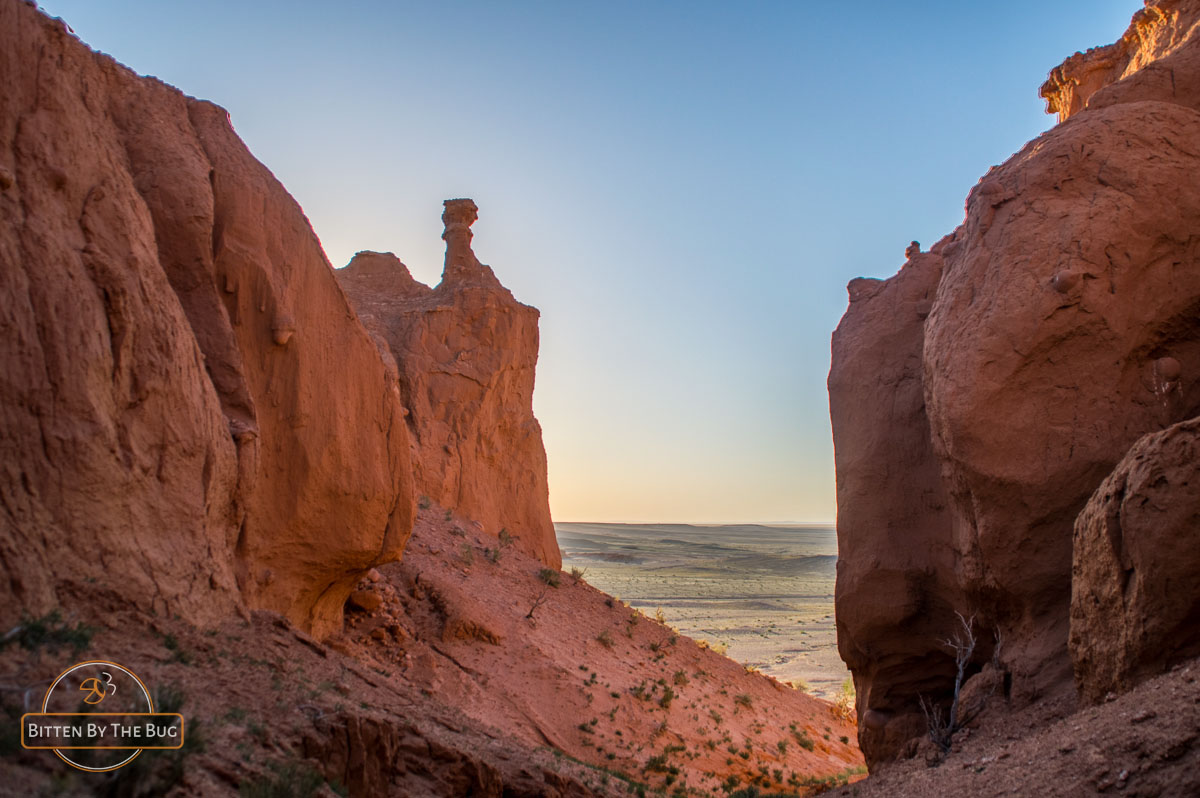 So why is Bayanzag so important? It is here that the first dinosaur eggs were discovered, along with fossils from the velociraptor and other dinosaur species during Roy Chapman's 1922 expedition. It immediately turned the site into one of the world's most significant sites for dinosaur fossils. Chapman himself lived an adventurous life across much of this part of the world. Did you know that the movie character Indiana Jones is based on his life? 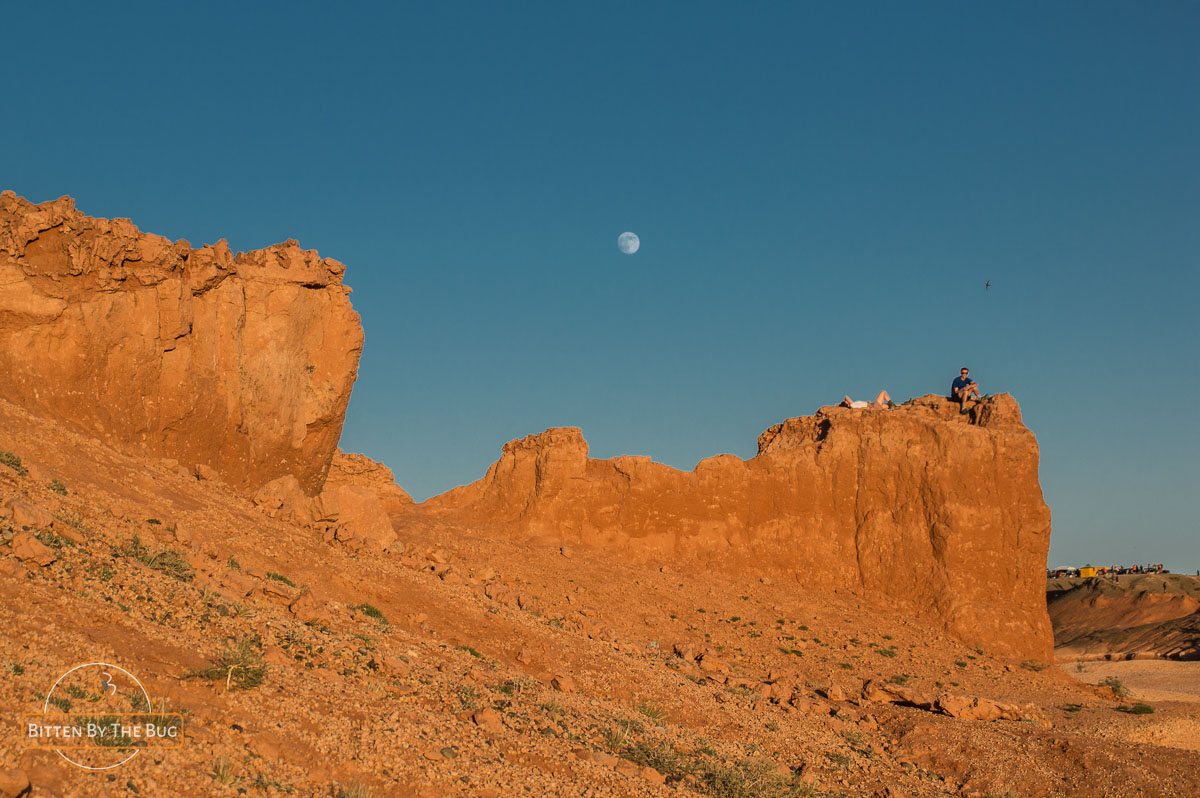 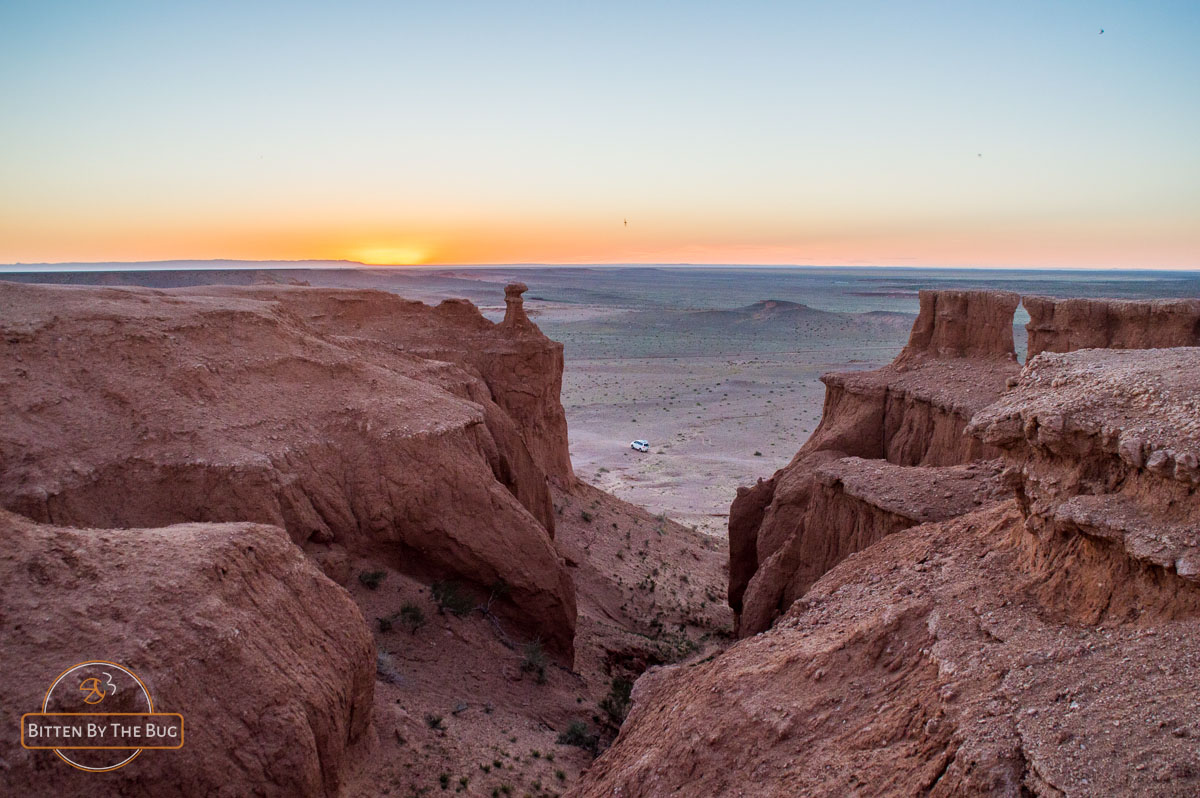 I wasn't able to spot any dinosaurs, but instead I found a comfortable rock and sat there for a while by myself, watching how the sun set on one side and the moon rose on the other. Amids that beautiful scenery, surrounded by 80 million years of history, I witnessed a truly splendid sunset. As the sun dropped below the horizon, its rays painted the cliffs into a vivid shade of red. I could've stayed there for hours. Too bad sunsets don't last that long. 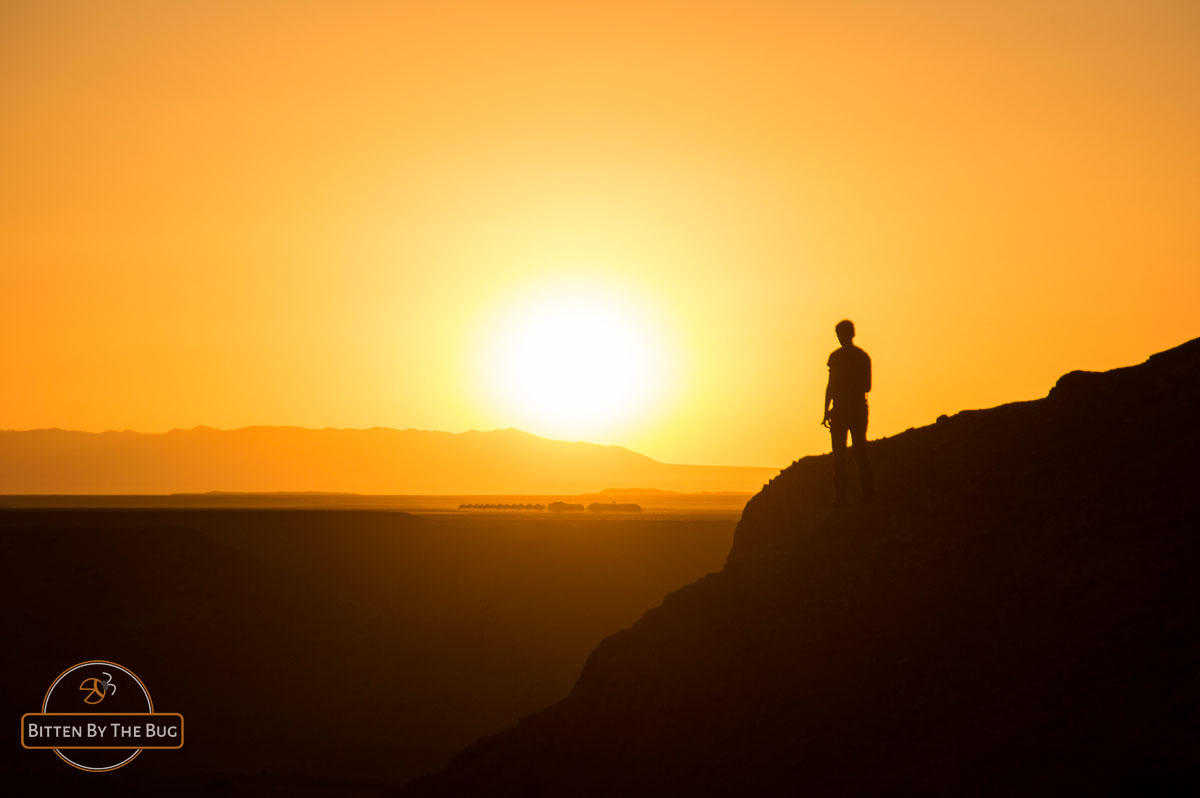 Back at the ger camp, Aurelien and I went of for a late night walk. We enjoyed taking distance from the camp and the people to take in the magical emptiness and silence of the Gobi desert. Then, we joined our group that was sitting outside and observed the clear sky filled with stars. Victoria taught me some cool tricks about night photography, so we played around drawing and writing in the sky with flashlights. Here are some results of that photoshoot. 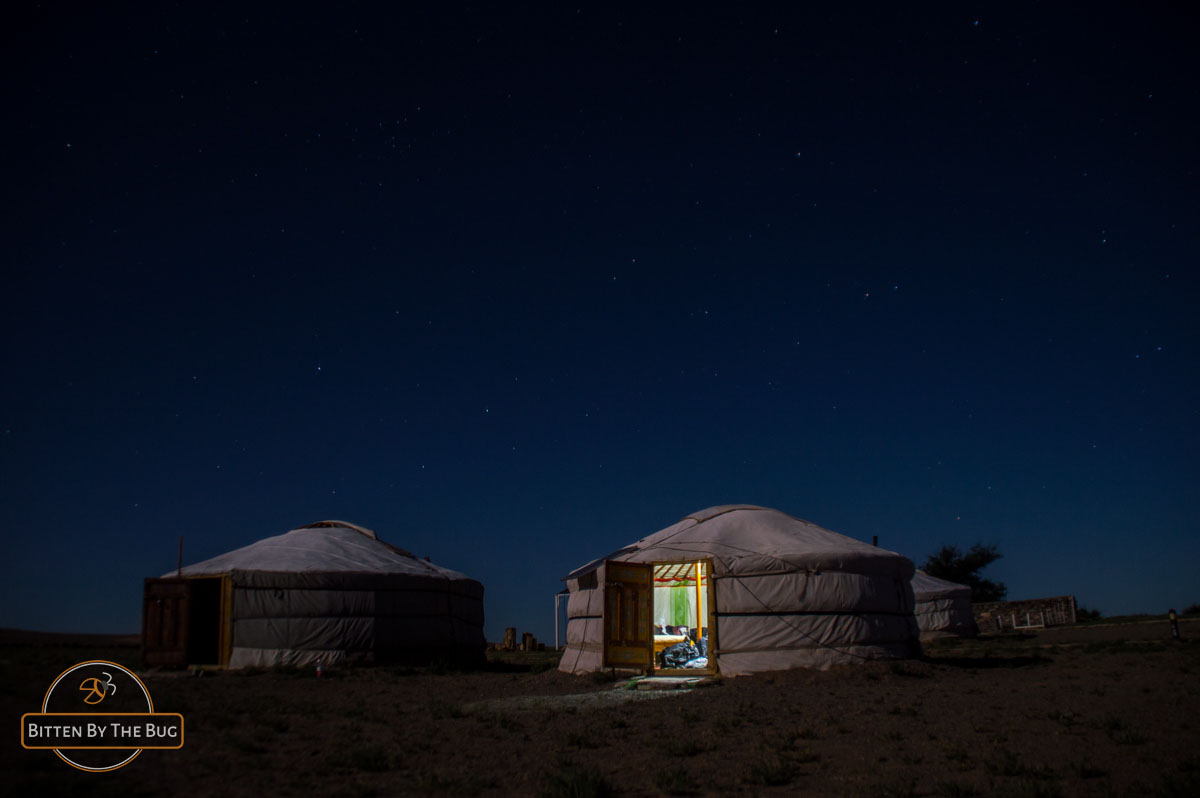 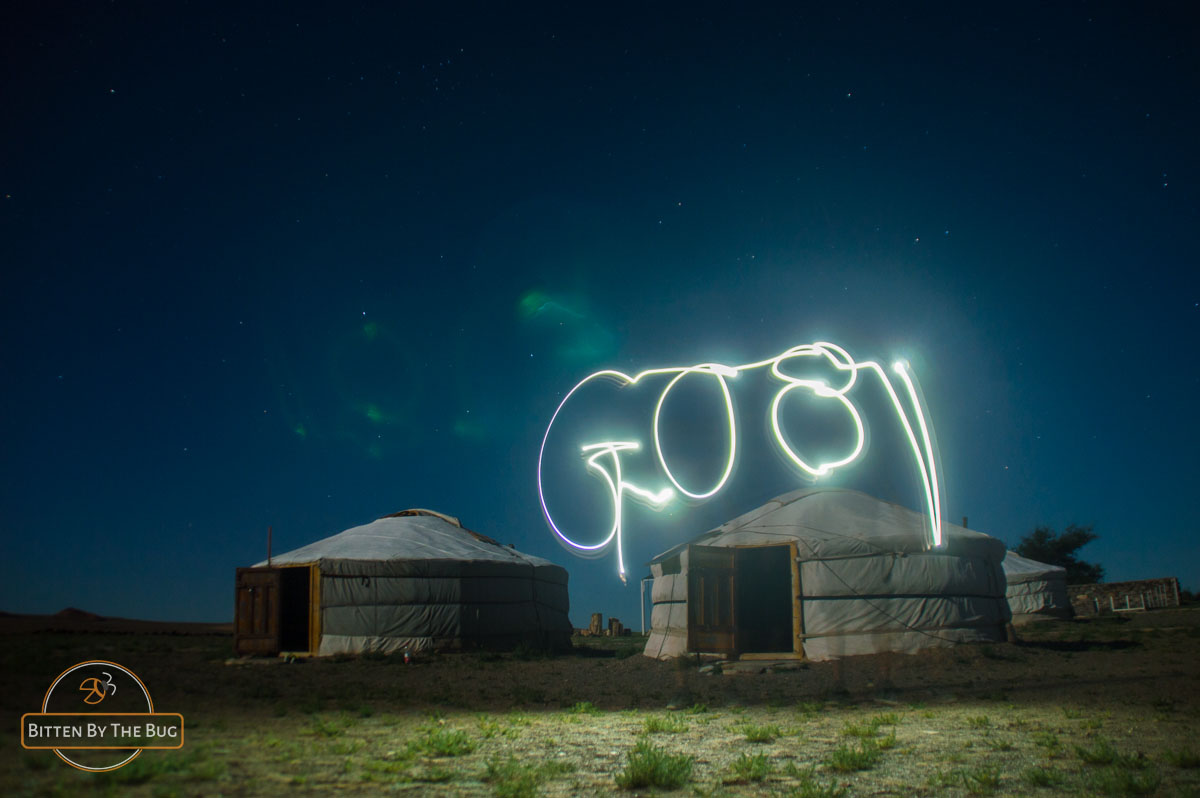 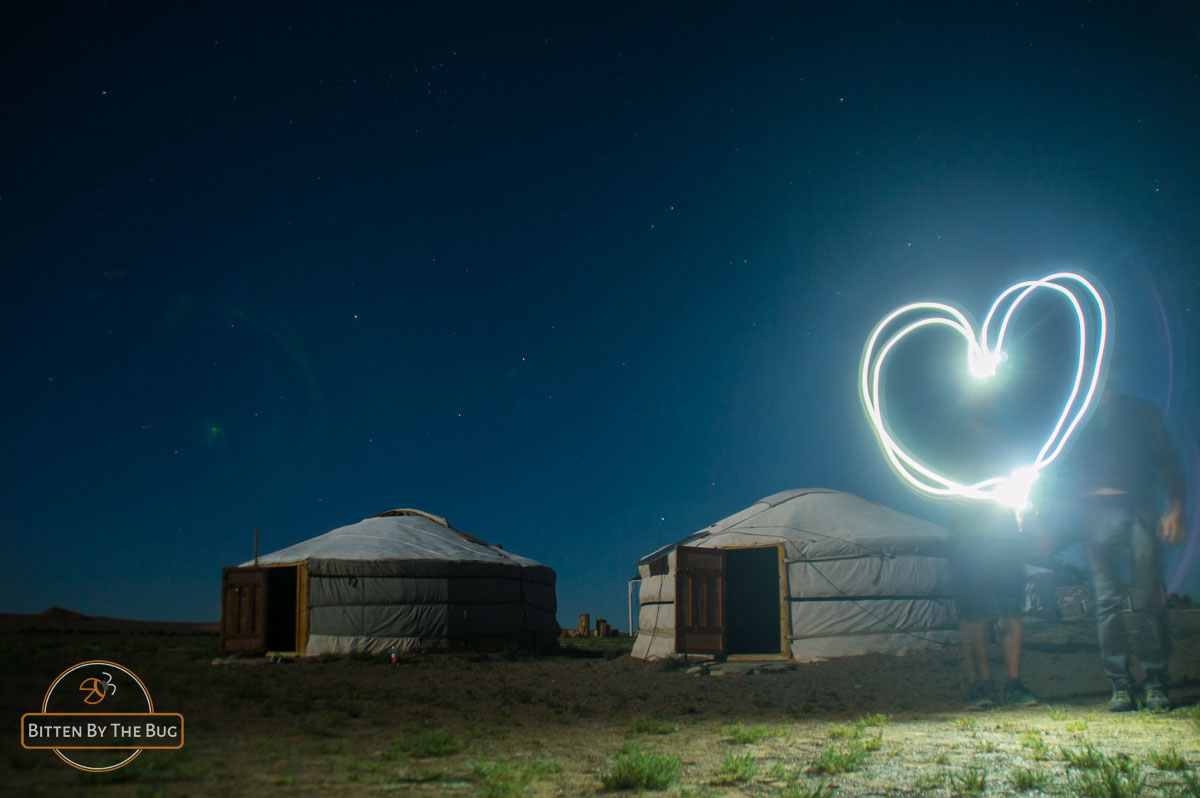 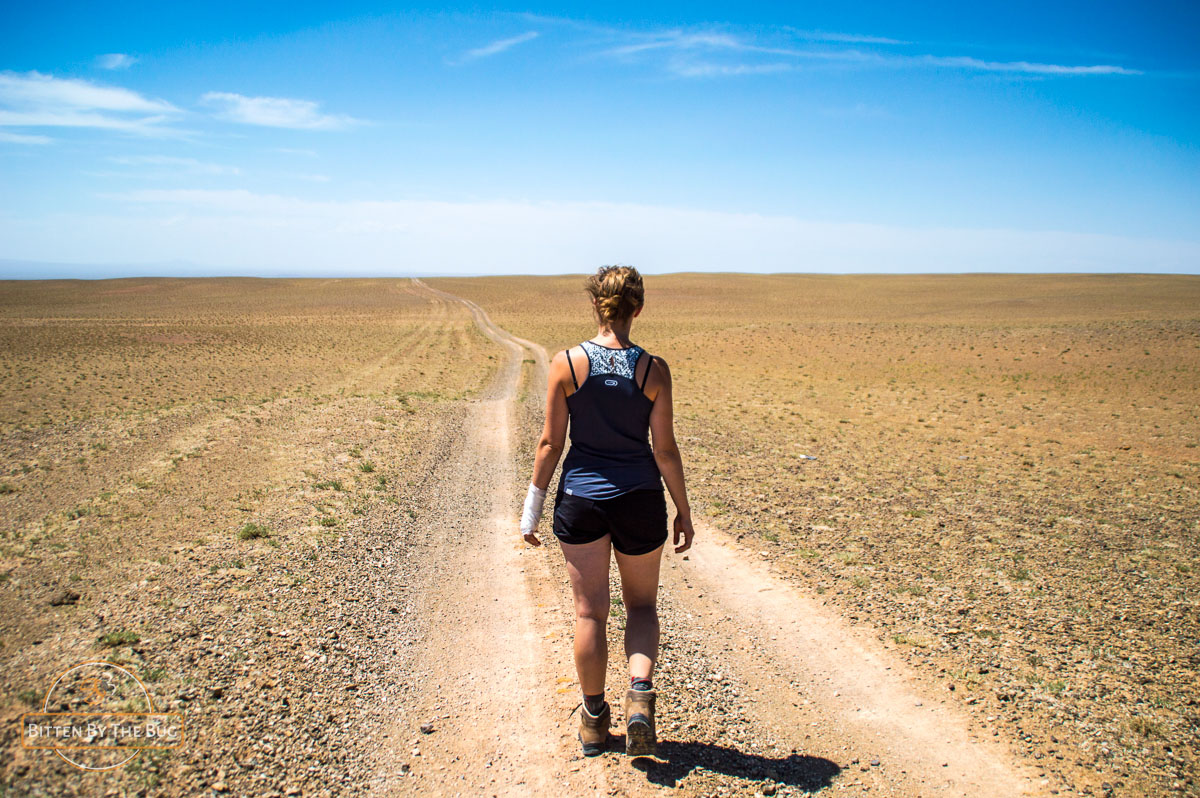 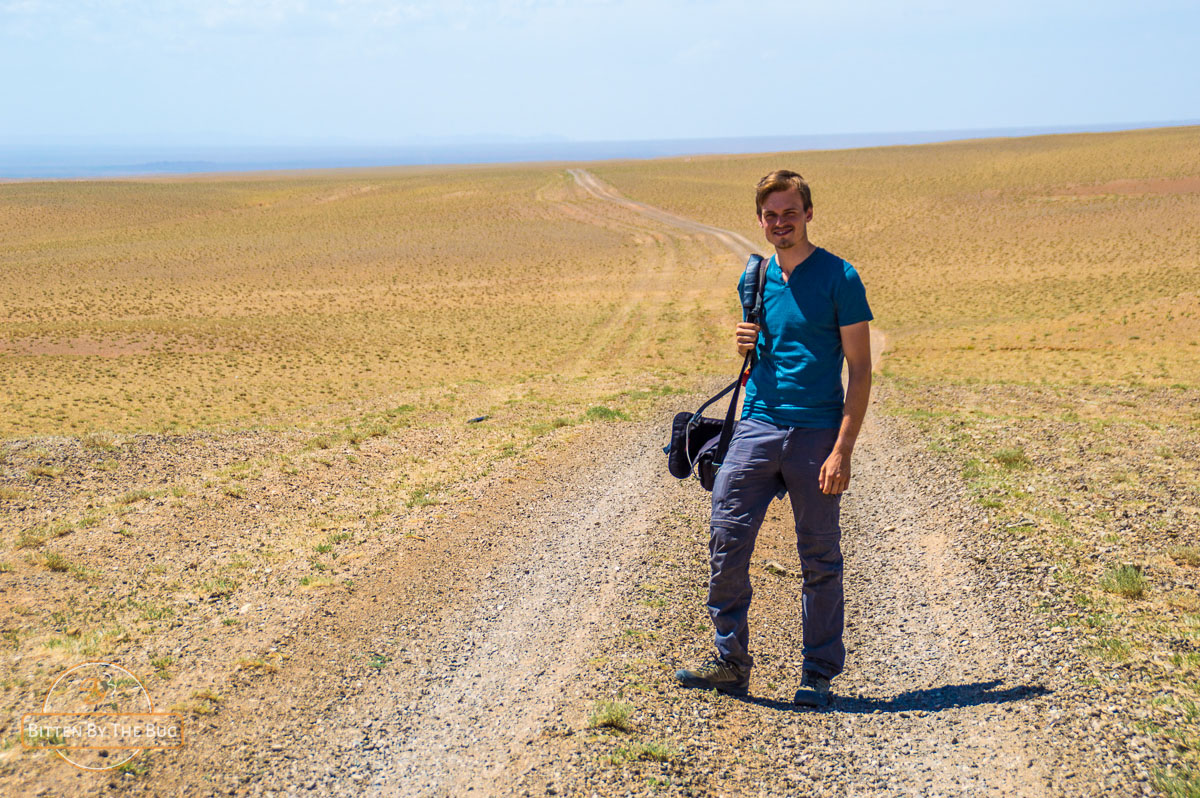 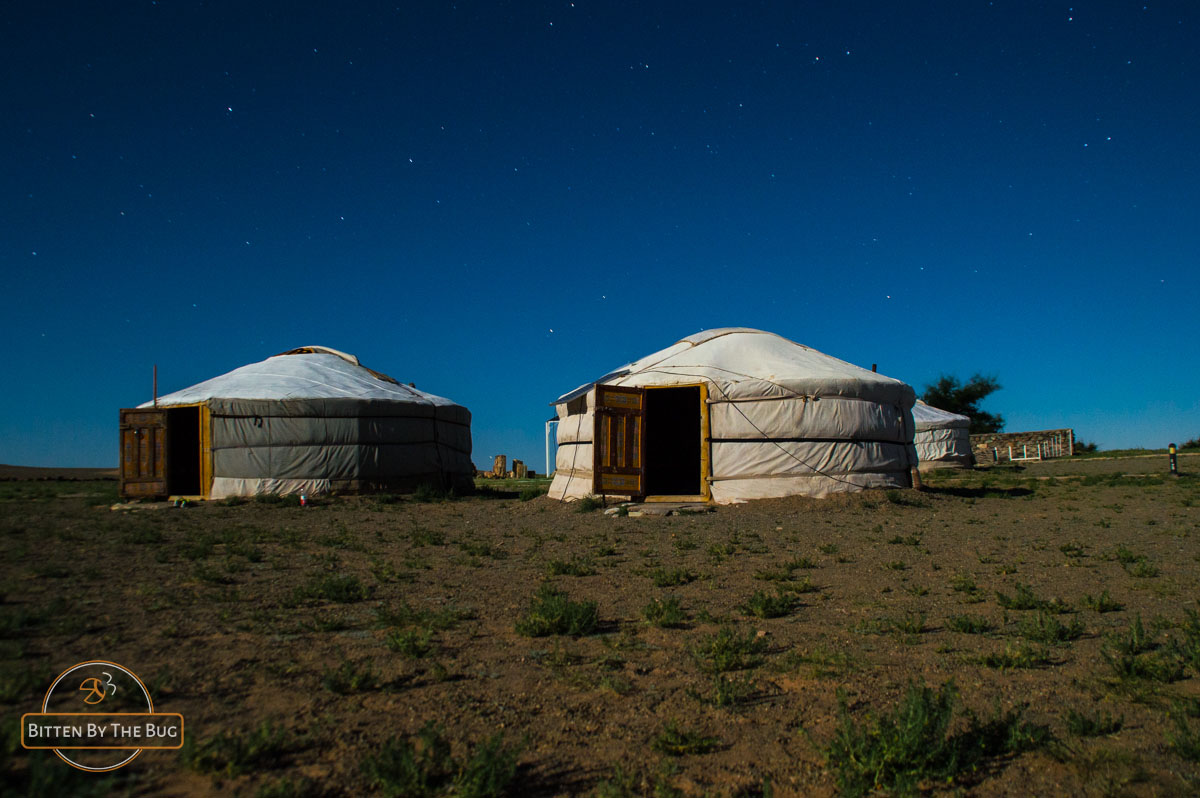