The Forbidden City, the name only has such a mysterious ring to it that it creates high expectations for the site itself. But despite its story being fascinating and the site being listed as a UNESCO World Heritage Site, our visit to the Forbidden City -or the Palace Museum as it is called in China- turned out to be rather disappointing. We enjoyed our time much better in the two parks that we visited afterwards, Jinshan Park and Beihai Park.

We didn't have to queue for too long before entering, so we walked on believing The Forbidden City wouldn't be too crowded today. We couldn't be more mistaken.

Upon entering the Forbidden City's inner area, we were greeted with a sea of humanity gathering in front of the Hall of Supreme Harmony, the largest and most important hall. This is where Ming emperors held morning court sessions with their officials and where leaders would look out over their people gathered for special ceremonies. We pushed to get through the massses and find out what was inside the hall. It turns out... there is nothing much.

In every temple there are some artefacts on display though, some of which are actually valuable works. They're part of the permanent and temporary exhibitions of the Palace museum. At the back of your entrance ticket you'll find a map showing their loacation. These imperial treasures bear witness of Chinese culture and history, Chinese art, the silk road...

During the Ming and Qing dynasty, the Forbidden City used to be a place of grand luxury. It functioned as the home of emperors and their households and as the ceremonial and political centre of Chinese government. Unfortunately, after this period, it went through a series of turbulent events. Because of the Japanese invasion and civil wars, the national treasures had to be evacuated. Some of them have been returned, but the majority remains in Taiwan. With the creation of the People's Republic of China more damage occured. The result is that today, whereas the grand temples still remain, inside there is not much left to see, turning the Forbidden City into a series of empty buildings separated by vast courtyards.

Behind the Hall of Supreme Harmony lies a series of grand halls. We walked from south to north, passing by many other similar-looking temples. It seemed as people would just not give up hope that there might actually be something spectacular inside the temple, as masses kept on assembling in front of empty temples, making it hard for us to walk without getting stuck in the crowds.

We took one of the smaller alleys away from the temples. The sights and temples were not as grand or historically important as those around the center axis, but this part was much more pleasant to explore. Here, it was even possible to imagine what the Forbidden City would've looked like in ancient times, without tourists taking away all the magic. 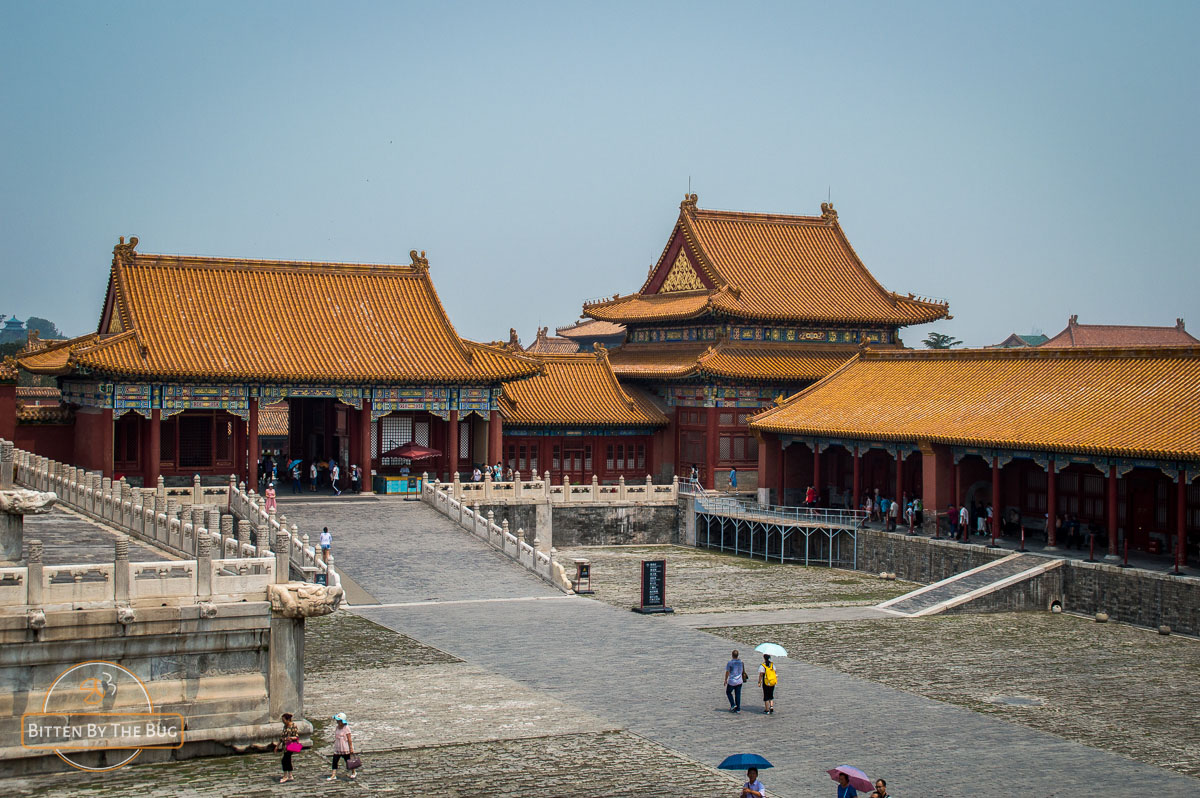 In ancient times, it was not uncommon for an emperor to keep up to 3 000 concubines inside the city walls, all of whom were 'married' to the emperor and not allowed to leave the premises without his permission. No one could actually leave or enter without the emperor's blessing, hence the name 'Forbidden City'. Besides the emperor, all other men inside the city had to undergo castration and live as eunuchs.

Fun fact: The Forbidden City is filled with references to the magical number nine, which represent the ultimate masculinity and thus the emperor. That's why the Forbidden City has 9 999 rooms, only one room less than the mythical 10 000 rooms of the palace in heaven.

Close to the exit is another crowded but beautiful section of the Forbidden City. The Imperial garden is a shady area with colorful pavilions, sculptures, rock features and 400-year old trees. 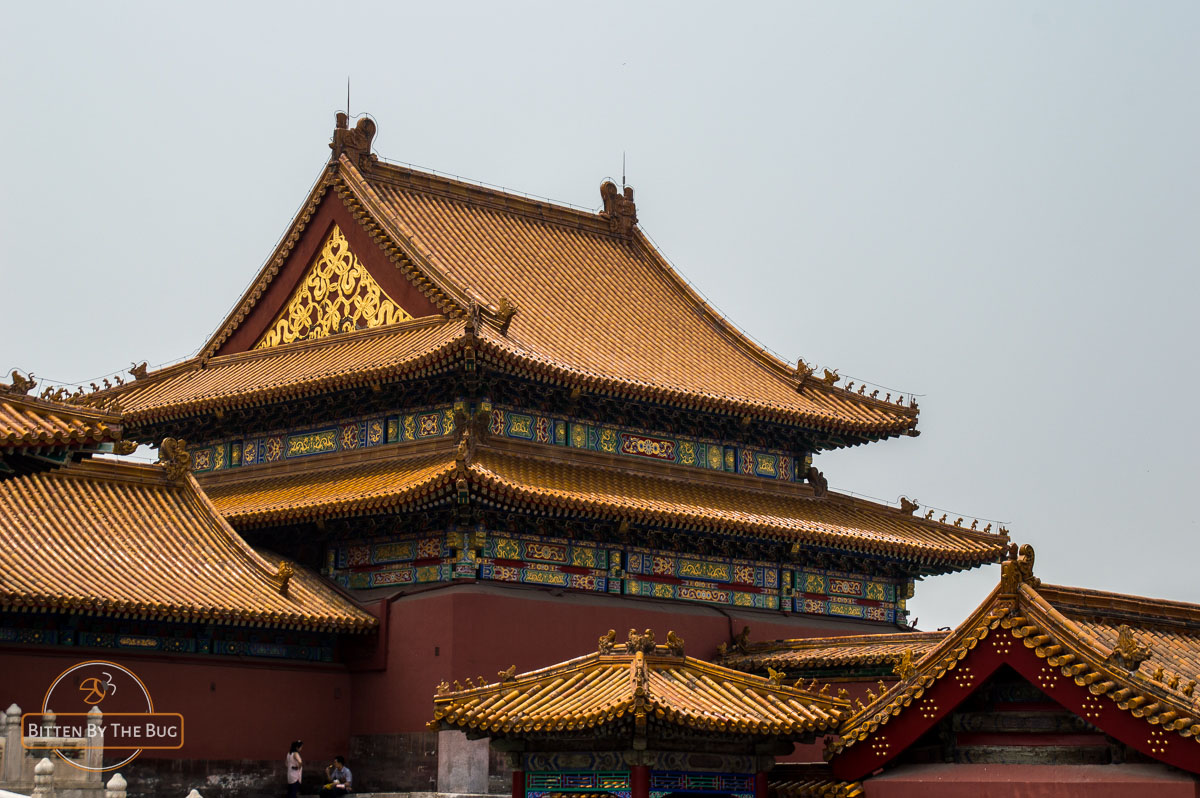 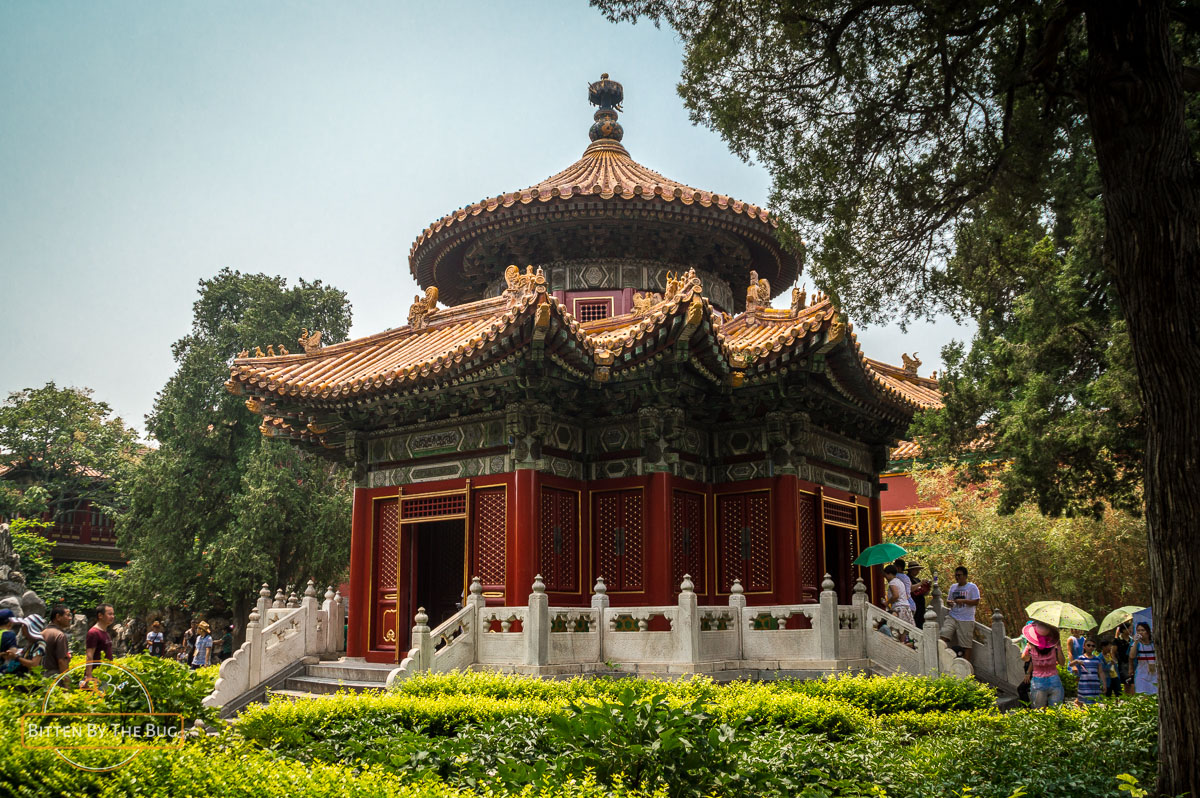 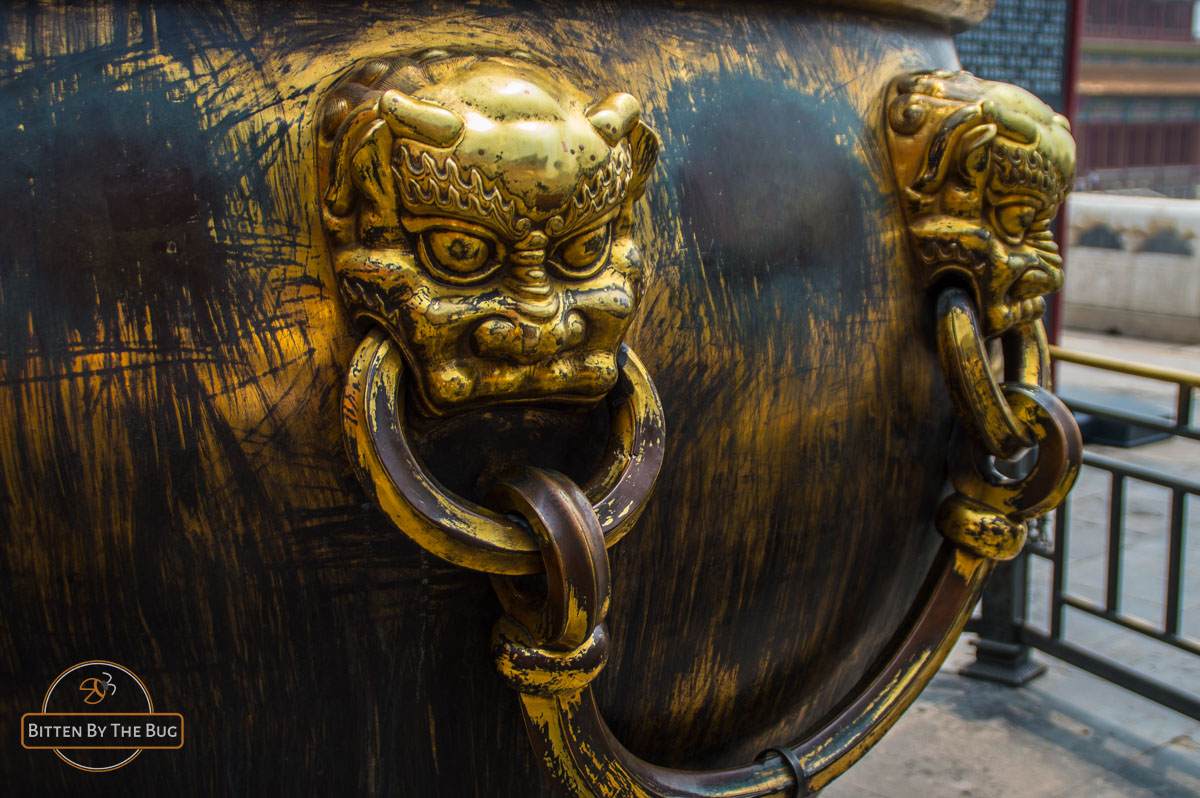 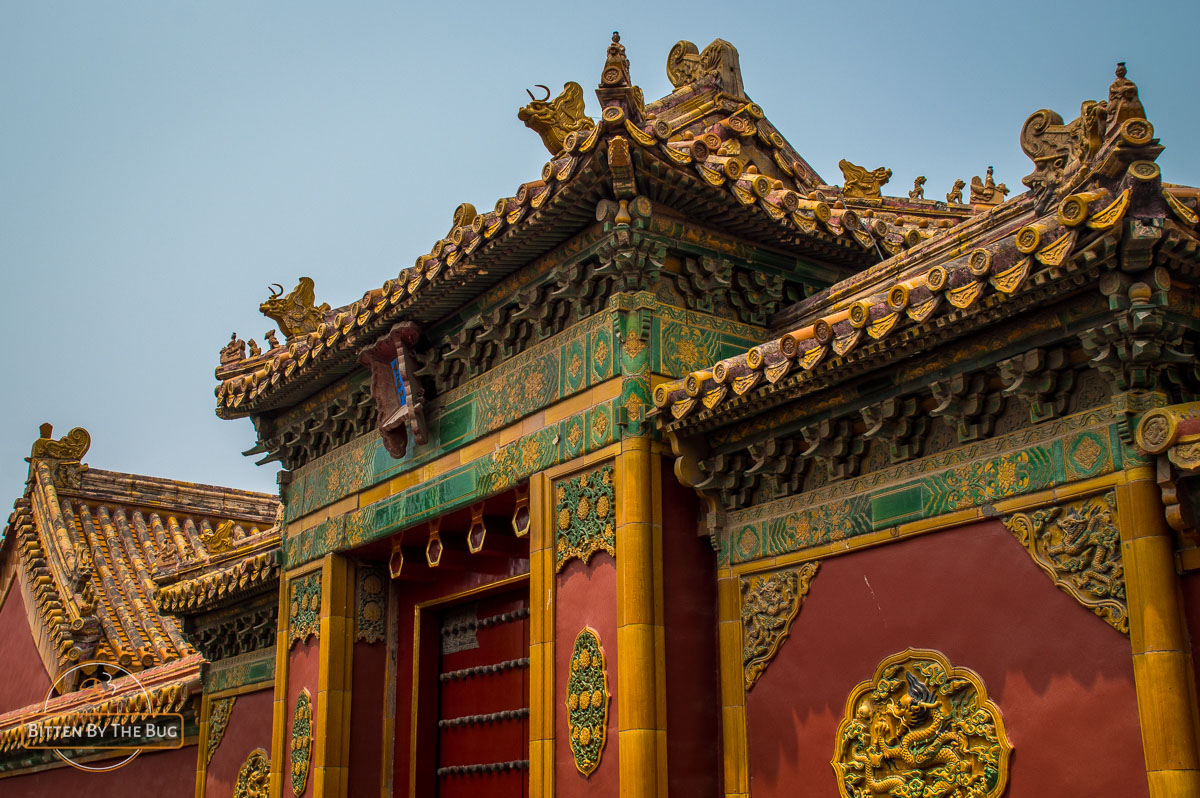 Exit the Forbidden City and Jingshan Park will rise up in front of you. Climb up the hill for a panoramic over the entire Forbidden City and its surroundings, among which Beihai park and its lake, which is where we went next. Did you know that the hill in Jingshan Park is man-made from the soil excavated in forming the moats of the Imperial Palace? It is especially impressive considering that all this dirt was moved only by manual labor and animal power.

While we sat on top of the hill, a Chinese man came to talk to us. After hearing I was from Belgium, he announced he could speak Dutch too. And he proved it. He gave us some interesting details about the Forbidden City... in Dutch! Unbelievable, we have so much trouble communicating with the Chinese in English, and here we are with a Chinese man fluent in Dutch. I would've gladly given him a multiple-day practice of Dutch, if only he accompanied us during the rest of our stay. 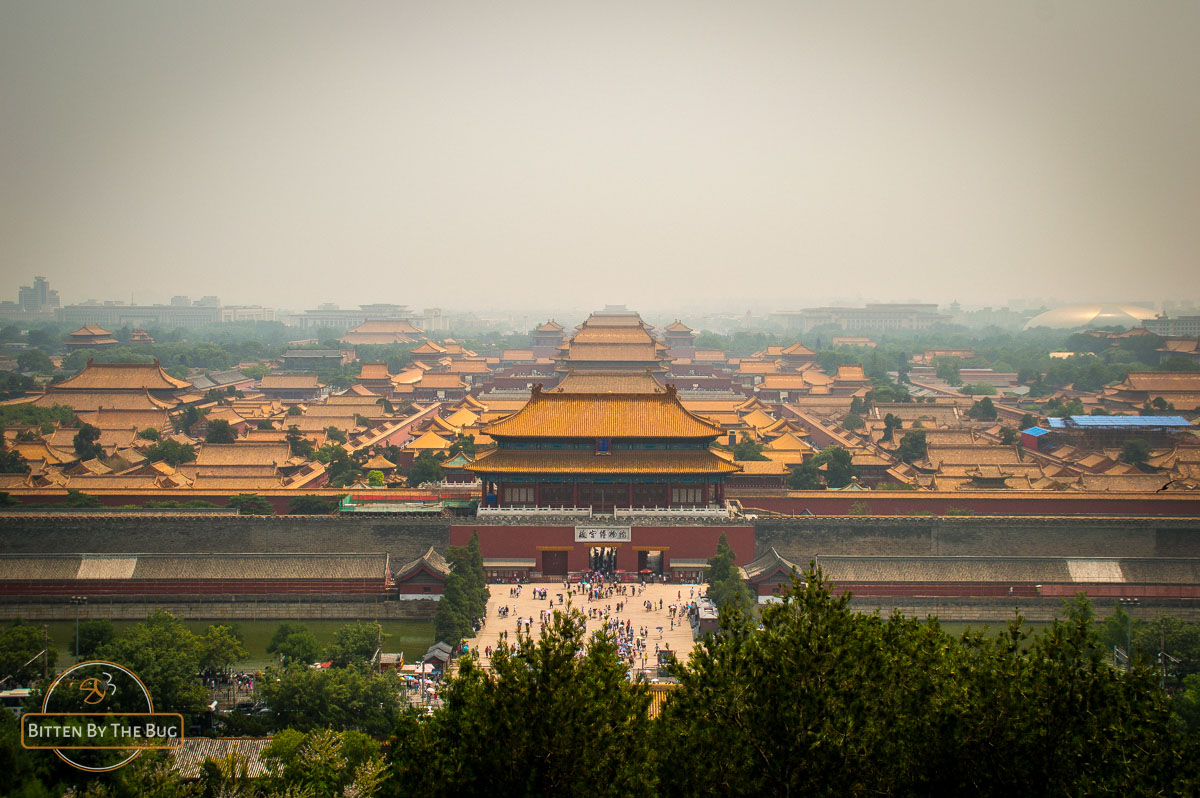 Having spent too much time among the crowds, I needed some personal space and Beihai Park was the perfect spot for relaxing. Nortwest of the Forbidden City, Beihai park is one of the largest imperial gardens in China and a prime example of traditional Chinese garden art.

We bought a bottle of ice-cold beer and installed ourselves on a bench along the lake. While watching little boats sail by, we felt our energy levels rise again. After this much-needed break, we continued our stroll around the lake and crossed the bridge to the little island with the White Dagoba in the middle of the lake. 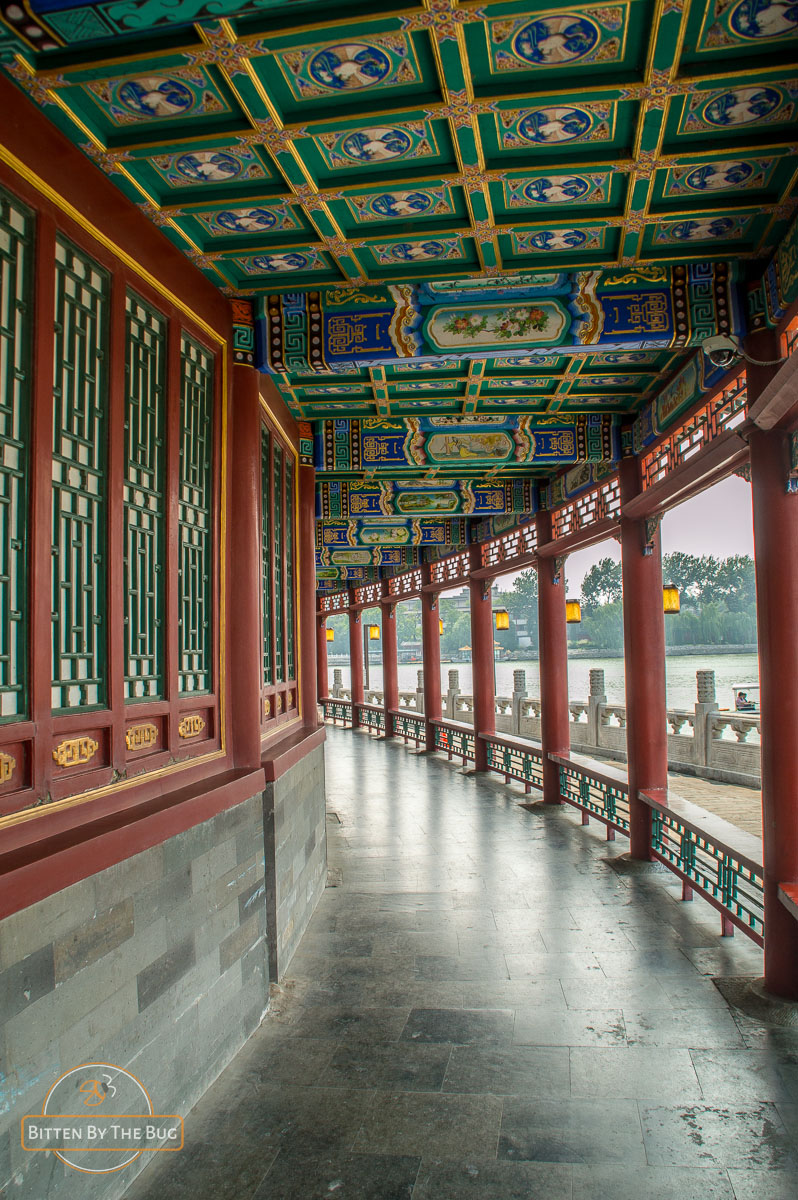 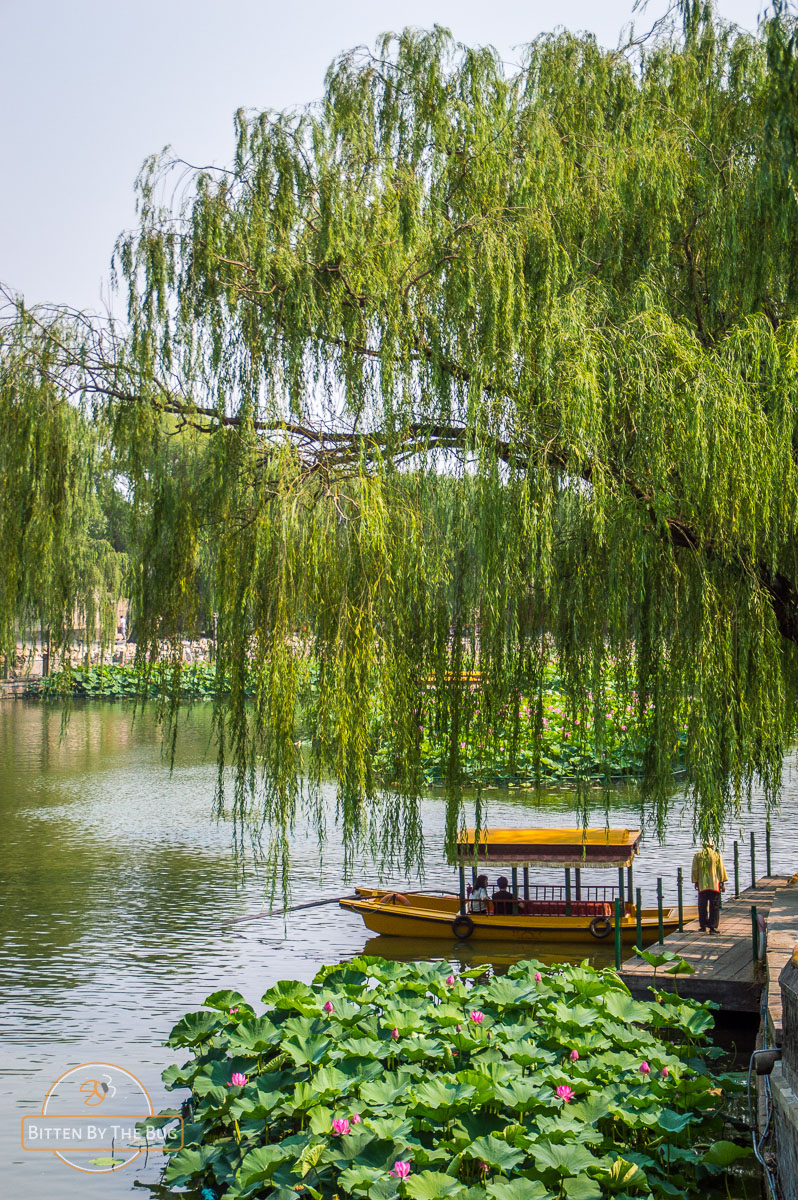 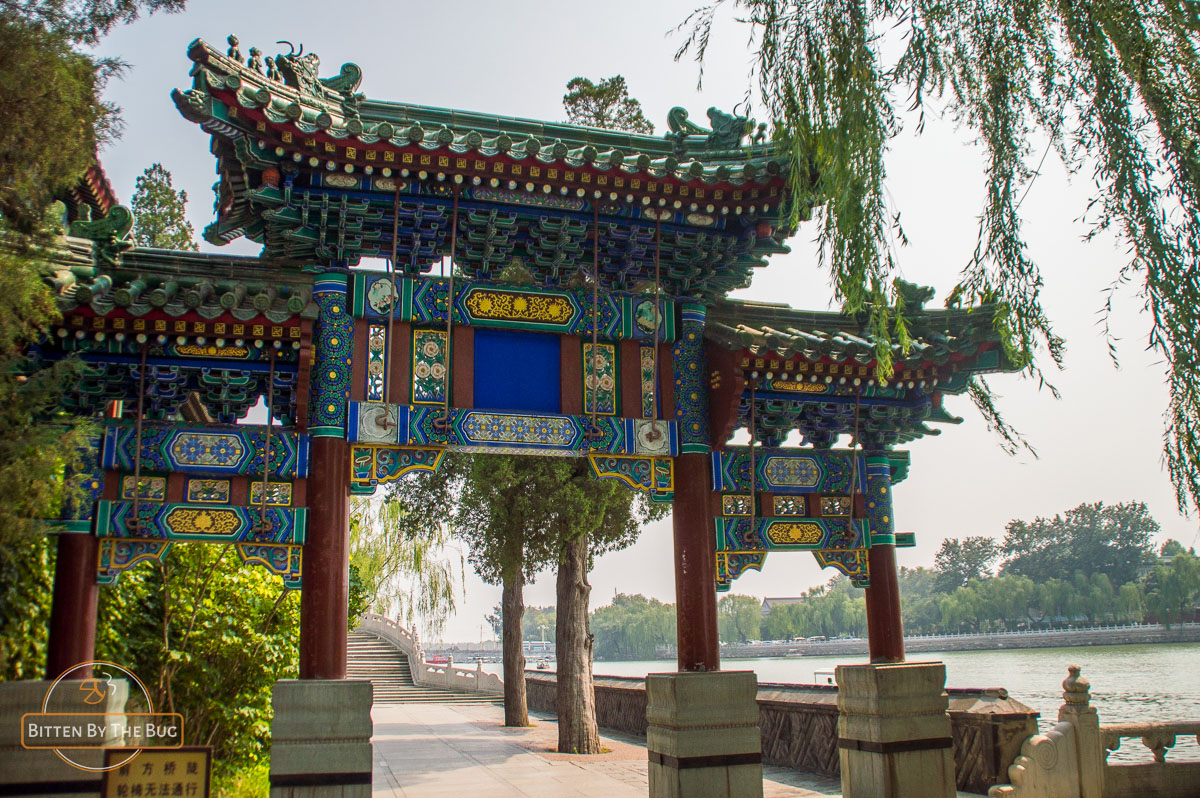 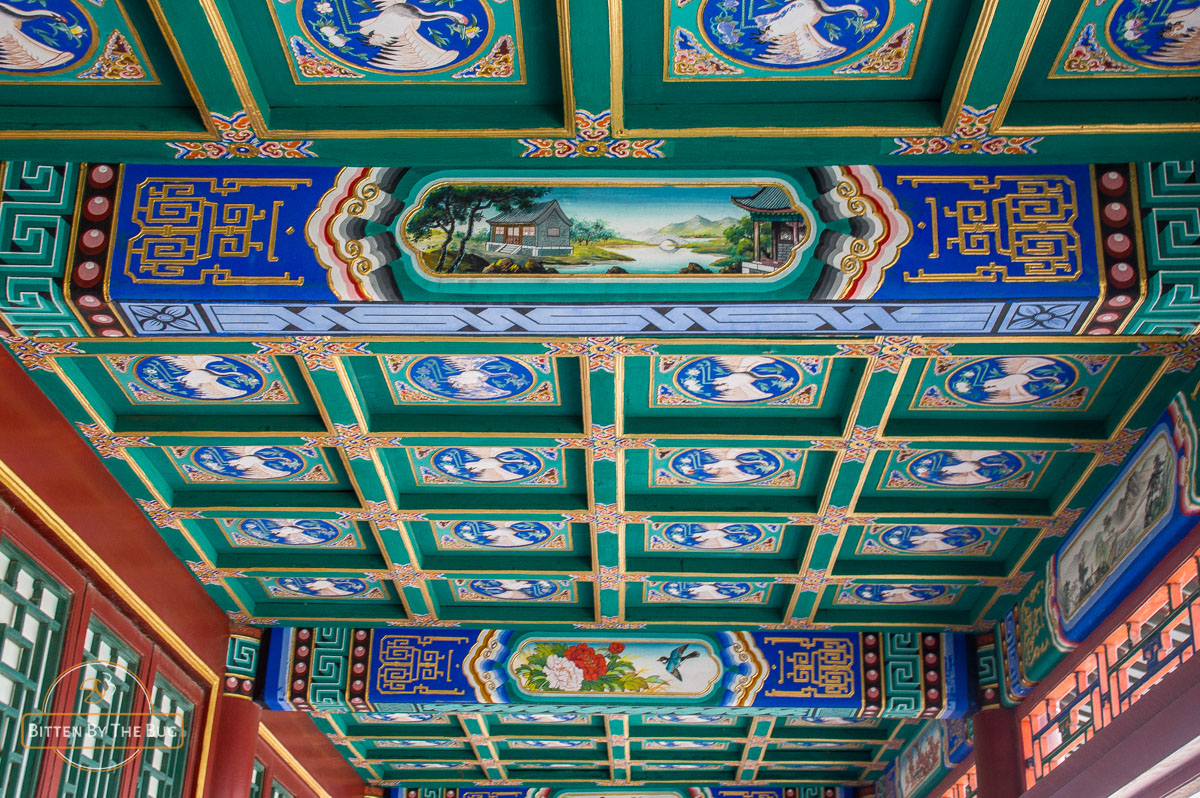 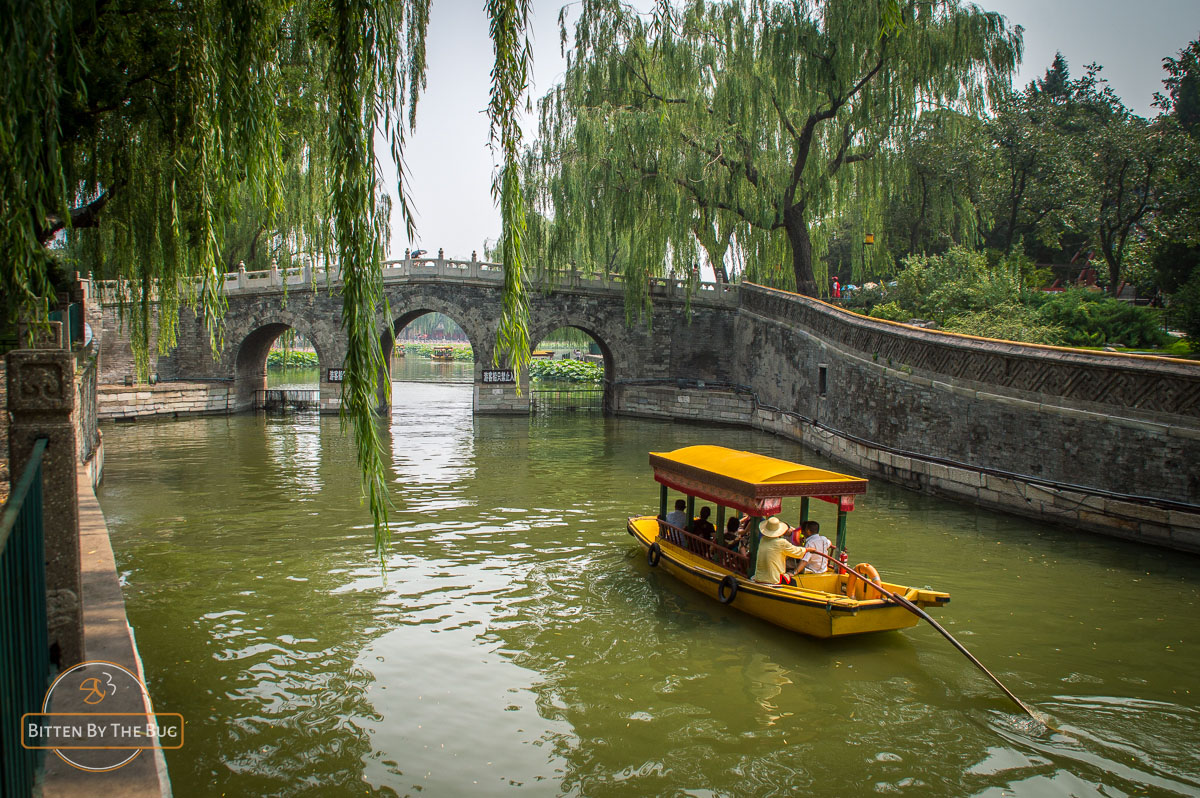 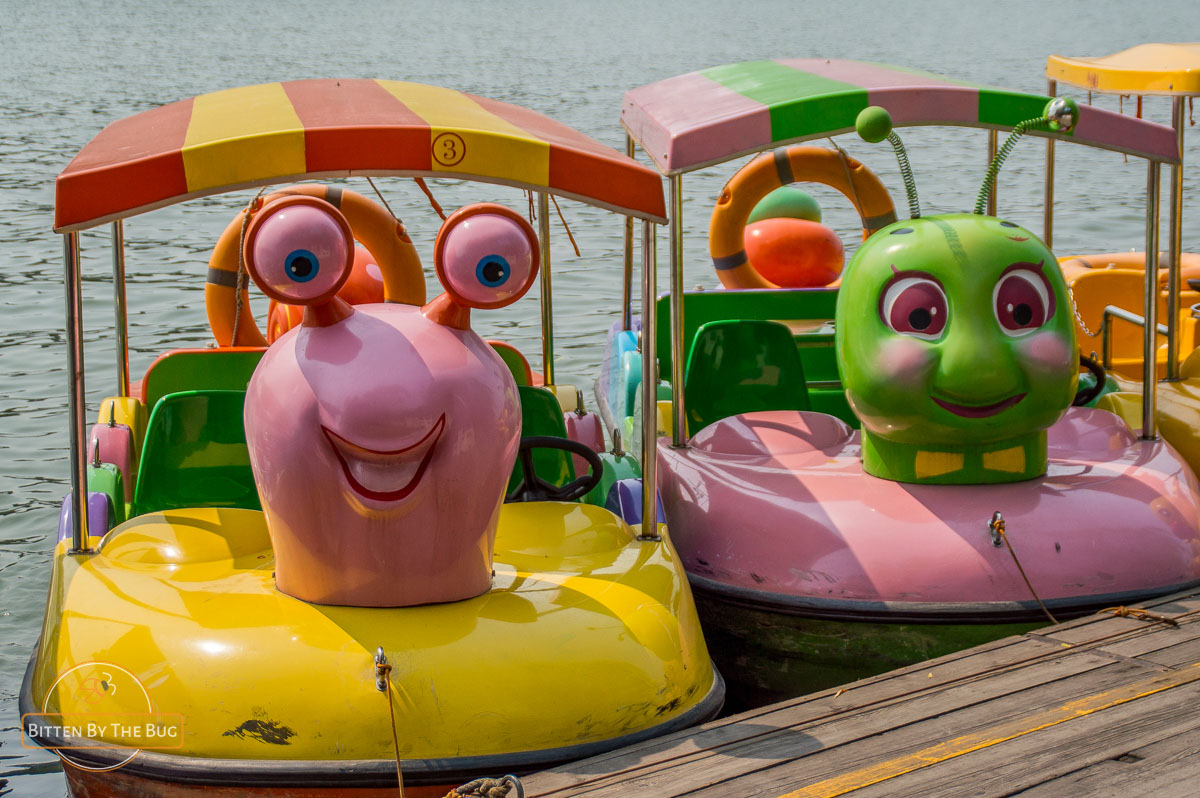 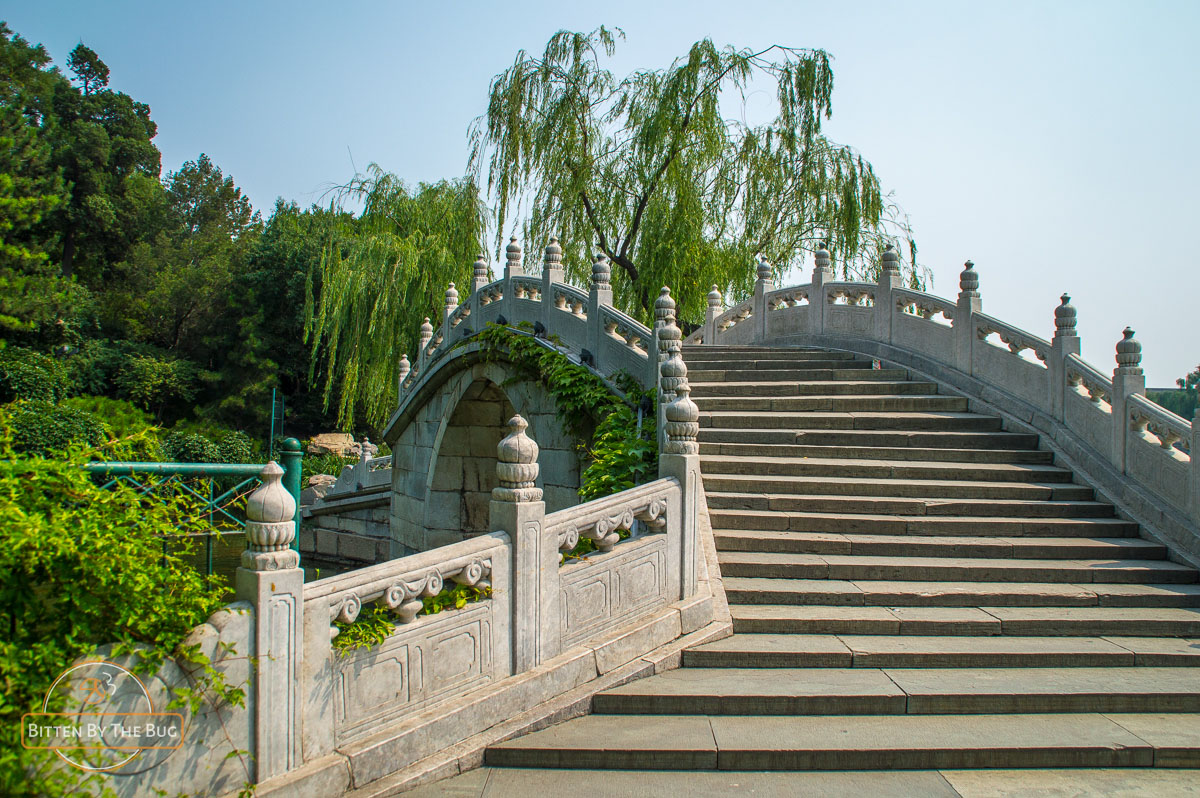