A less touristy face of Beijing

A less touristy face of Beijing

Our visit to the most touristic place in Beijing had left us wondering about Chinese history and culture. Realising our knowledge was too limited, we were looking forward to the Free City Tour we'd attend in the afternoon. After that, we had planned on visiting a rather uncommon place and try out one of Beijing's beer bars.

Why is Beijing the capital of China?

A little before 5pm, we hurried to the meeting point for the free city tour, organised by Beijing Walking Tours. We joined a group of tourists gathering at the exit of the metro station, so we joined them, hoping they were there for the tour too. Not much later a young, Chinese college student introduced himself as our tour guide. After a quick round of introducions, we moved away from the busy street we were on, and walked towards the Hutong area.

Situated far north, far from any major rivers or sea and close to their enemy Mongolia, Beijing has been chosen as capital of China. Taking into account these big disadvantages, this decision makes no sense at all. So why is Beijing the capital of China? Starting off with this intriguing question, our tour guide had captured everybody's attention.

Our guide didn't go on to explain. Instead, he left us wondering and pointed out the little river going through the Hutong district. All water sources here are artificial... and built by the Mongolians. 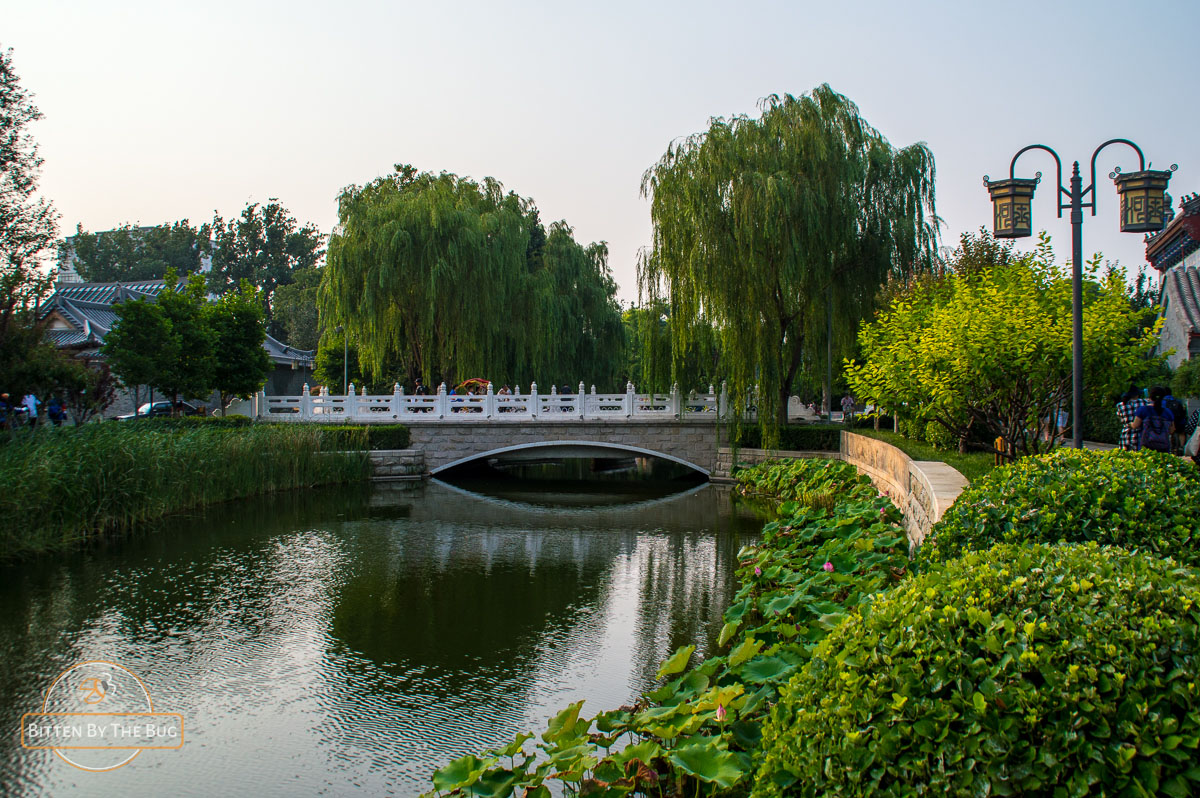 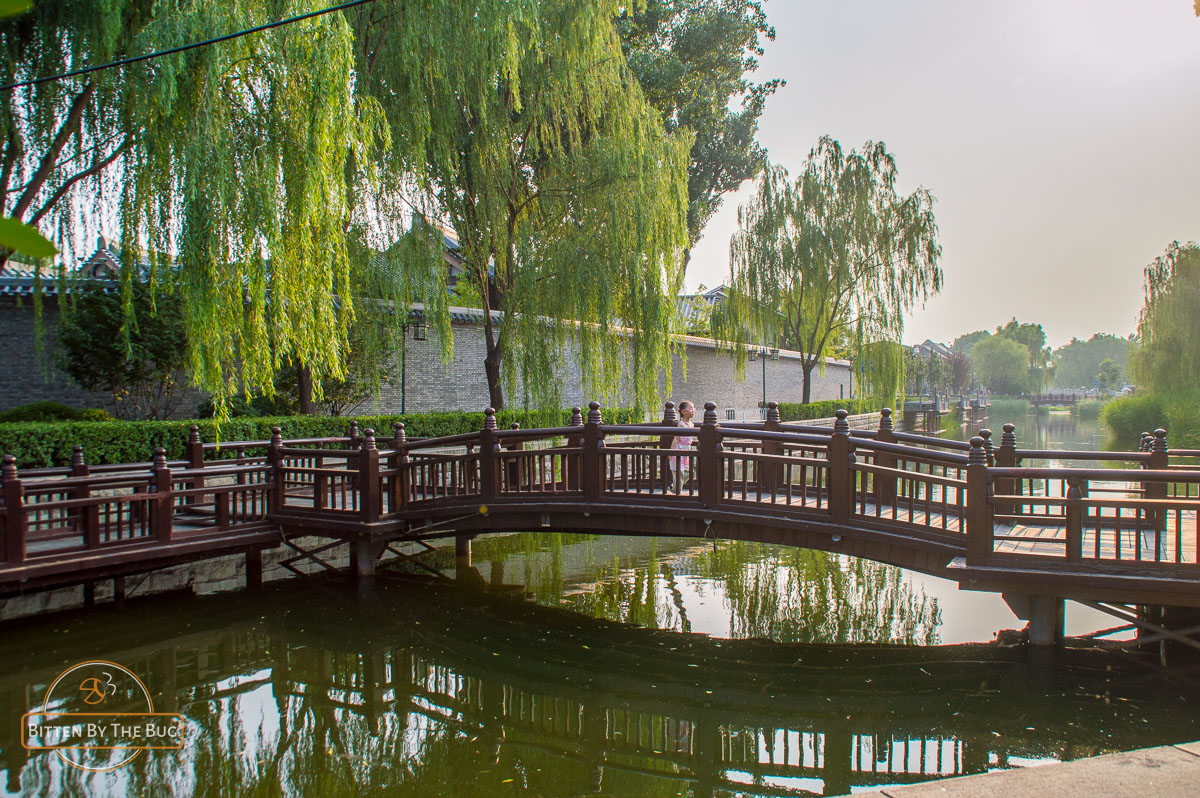 Now that the group was all ears, the guide explained. Beijing has not always been China's capital. Back in ancient times, when emperors felt safer living further in the south, Beijing was a place where prisoners were sent to build the Great Wall against the Mongolians.

After Genghis Khan's grandson Kublai Khan had conquered a gigantic empire, Mongolia was not a good place as a political centre, but Beijing was. So the Mongolians built streets and houses in the Hutong district. The only problem was that there were no water sources, so they dug water wells. The translation for 'well' in Mongolian is 'hottog', hence the name 'Hutong'.

The next war was won by the Chinese. The Ming dynasty chose another capital in the middle of China, Nanjing. The emperor, Hongwu, had four sons, among which one worked in Beijing. When the emperor died, he specified his grandson Zhu Yunwen as his successor. The most powerful of Hongwu's sons, Zhu Di, disagreed and killed his nephew with his army. He then moved the capital to Beijing. Having lived and worked there for years, he was not scared of that place. Instead, he was afraid of Taiwan in the south, which made Beijing a logical decision.

Fun facts about the Hutong District

The water wells are no longer in use today, so the meaning of 'Hutong' changed to 'small alleys'. Today, this is one of the reasons why young people don't like living in this district, as they cannot park their cars here. The houses are small and old. There are not even toilets inside. Instead, people use the public toilets which, being cleaned 10 times a day, are very hygienic. For a small fee, it is also possible to take a shower there. The inhabitants of the Hutong district aren't too well-off, so they limit their shower use to once a month in Winter and twice a week in Summer. 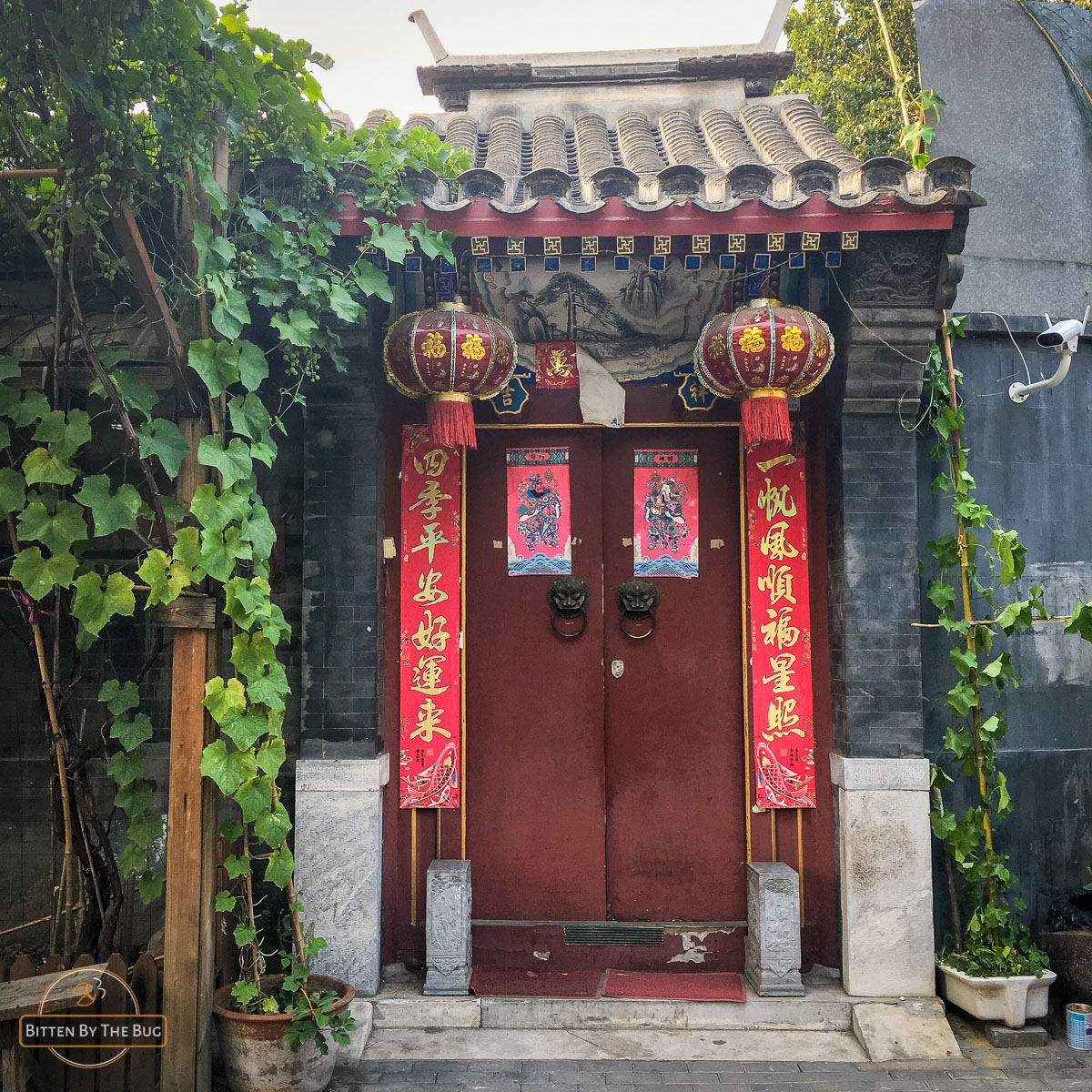 You can tell a lot about a residence by its facade. One residence is usually shared by many families. If you want to know by how many exactly, all you should do, is count the number of electricity meters attached to its facade. It suffices to say they also have no internet in this district.

In front of every residence is a little treshold that protects the inhabitants against evil spirits. It is believed the evil ghosts are small and have no feet or knees, so they cannot get over the treshold. 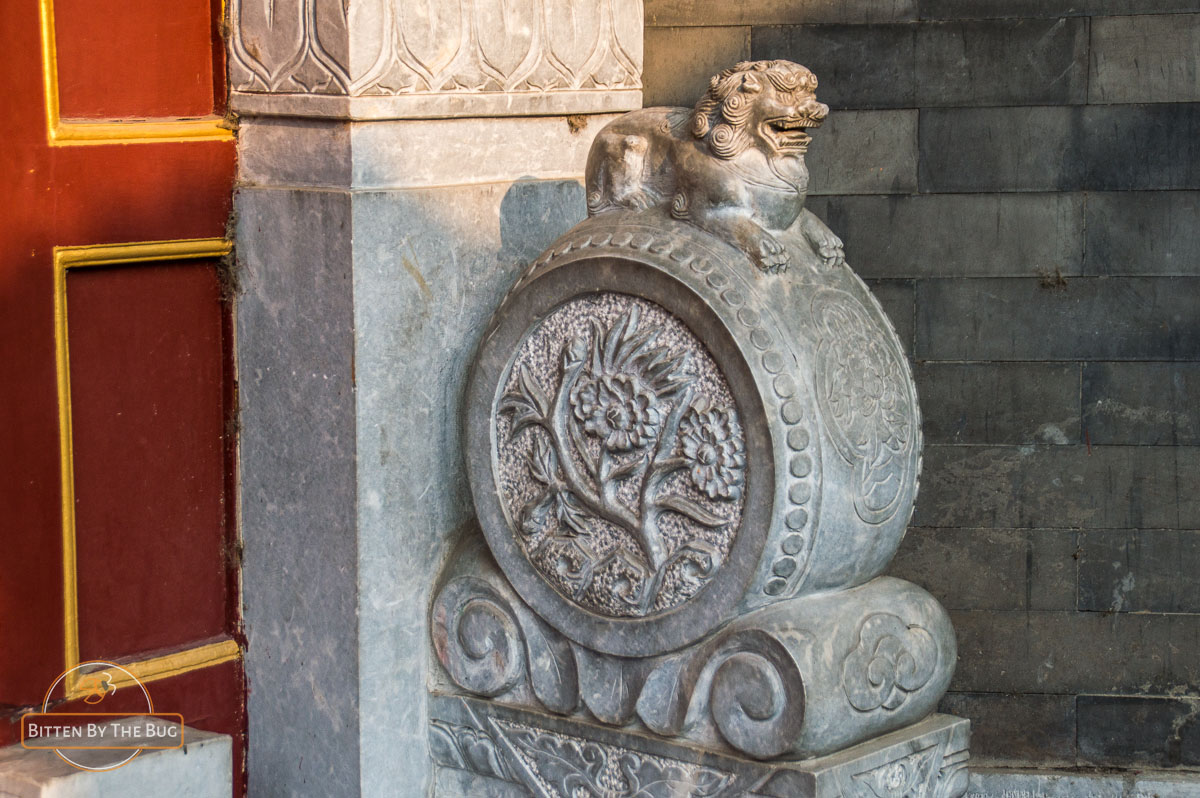 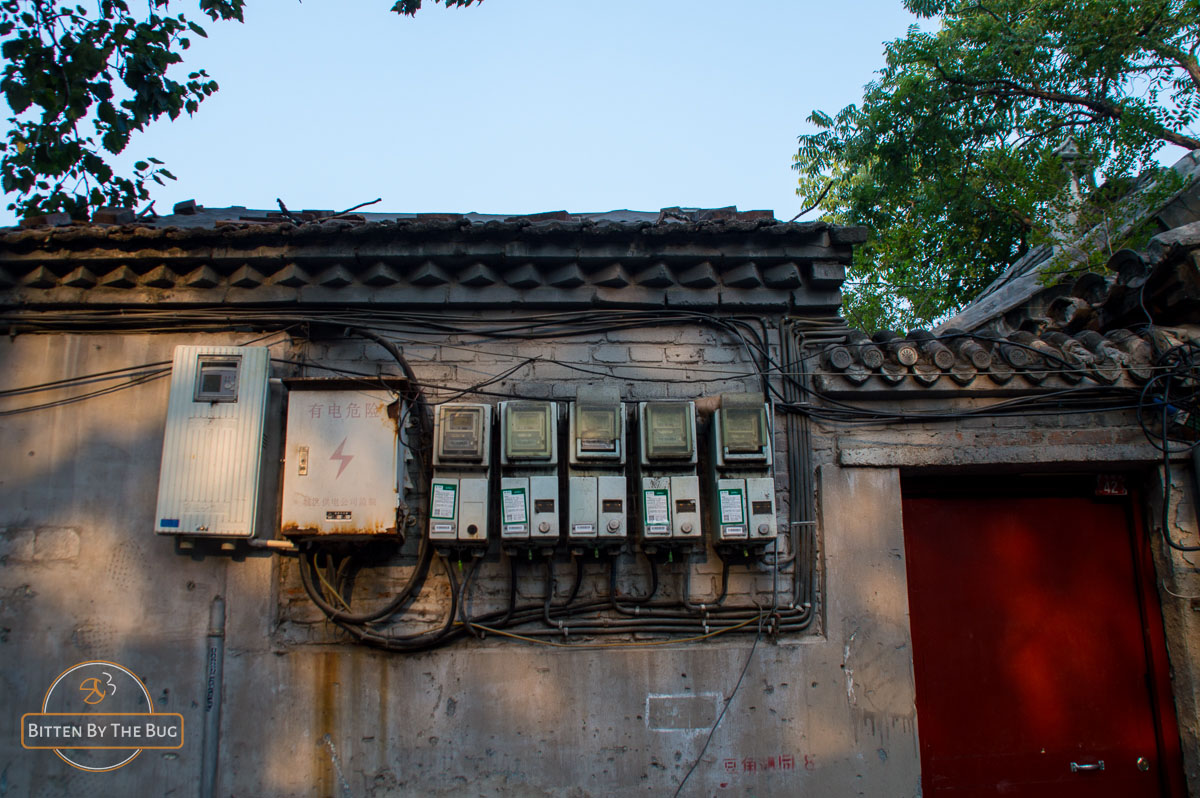 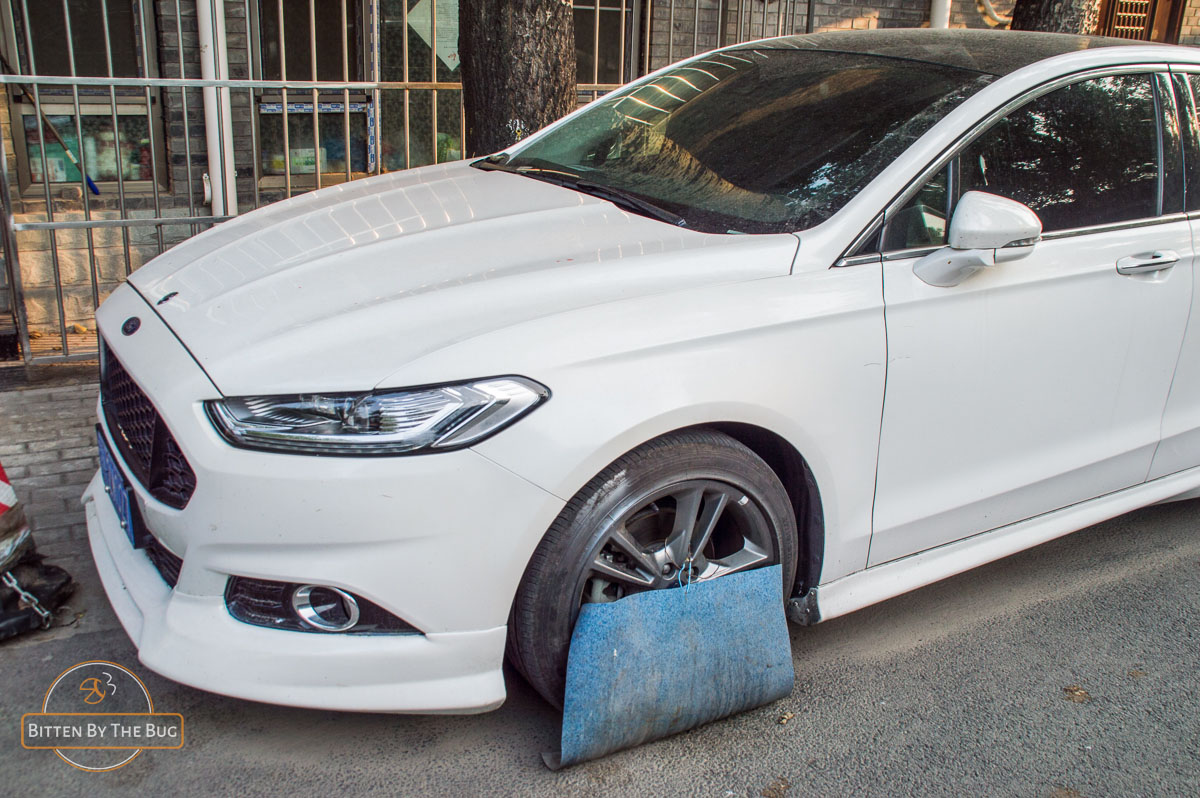 Picture: People love dogs in this neighboorhood. But the dogs pie against their cars, so they protect the wheels using carboard or carpets.

We entered one of those residences where an old, famous man lives. We walked through the courtyard and were greeted with a 'nihao'. Turns out this welcome was uttered by the host's Mandarin speaking parrot, surprisingly enough the least interesting of our host's many pets. 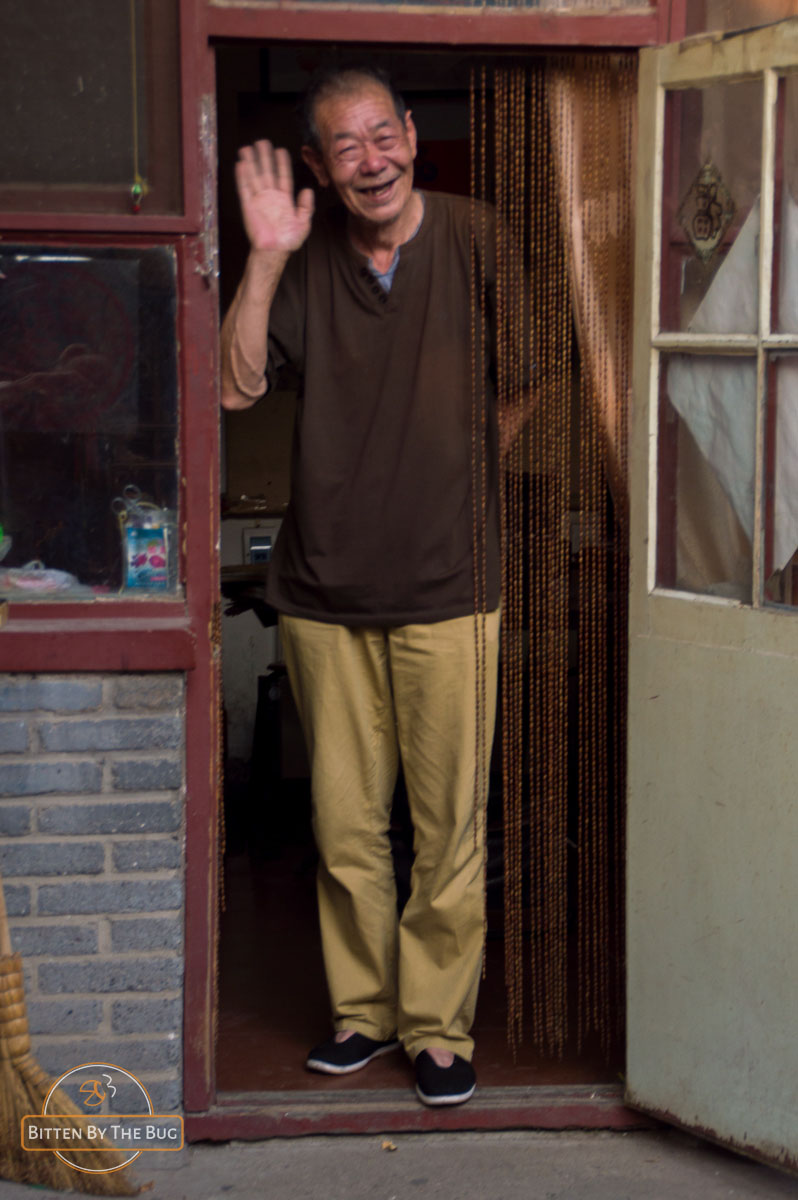 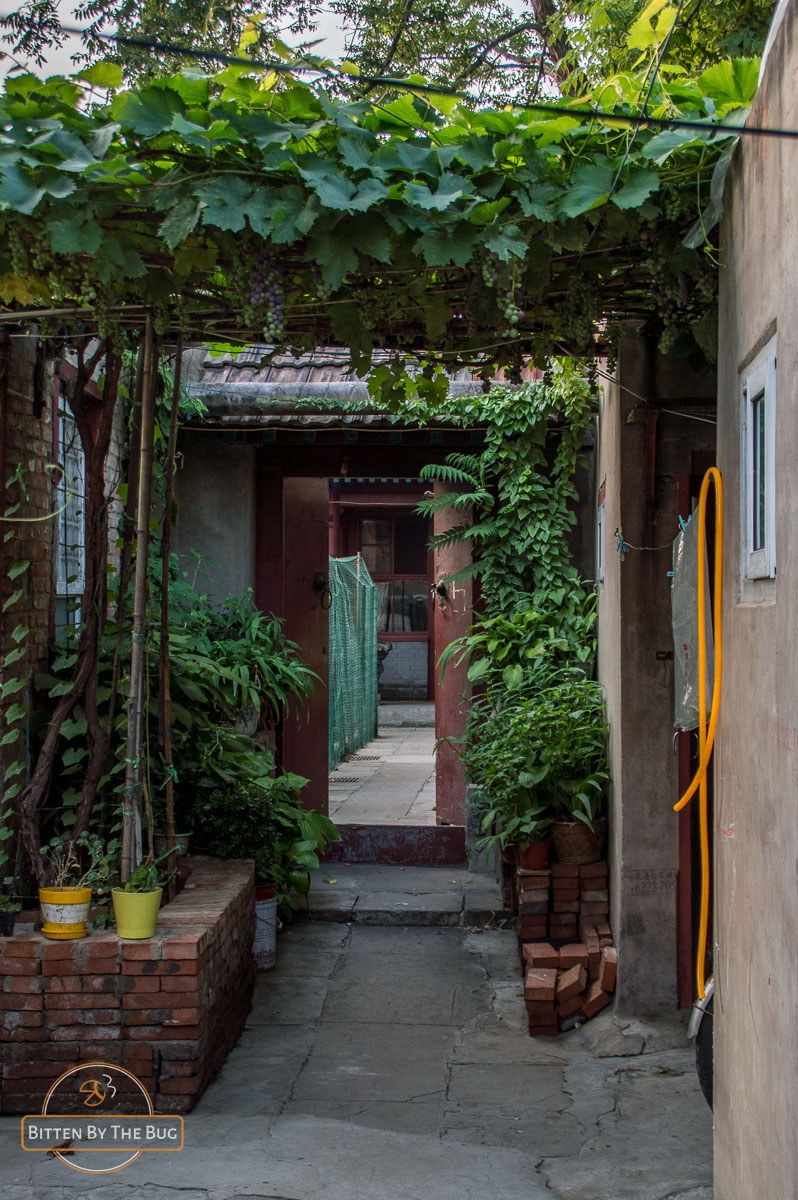 An old man welcomed us all in. This was Mr liu, a famous cricket fighter and local celebrity. In China, cricket fighting has been practiced for 1500 years. The ancient emperors used to organise cricket fights in the Forbidden City.

It is a sport in which a lot of money is involved. The best crickets come from the Shandong Province. They have pedrigrees and are carefully bred by knowledgeable keepers. A good cricket can cost up to 10 000 usd. But cricket fighters are willing to pay the price, because with a winning cricket they can make enough to buy a new house or a fancy car. Or even women, we have been told... Although it is illegal, people gamble on cricket fights and win (or lose) insane amounts of money with it.

Only male crickets are used for the fights. You can tell if a cricket is male of female by its two or three tails respectively. When he wants his crickets to reproduce, an owner will present five females to his male cricket, hoping at least one of them will please Mister Cricket.

Mr liu showed us the clay pot in which he keeps his cricket lives. Inside is a little bowl for food and another for ginseng water (which is very expensive). A cricket's diet includes ground shrimp, red beans, goat liver and maggots. It is no wonder that the crickets don't try to escape when they live in so much luxury. 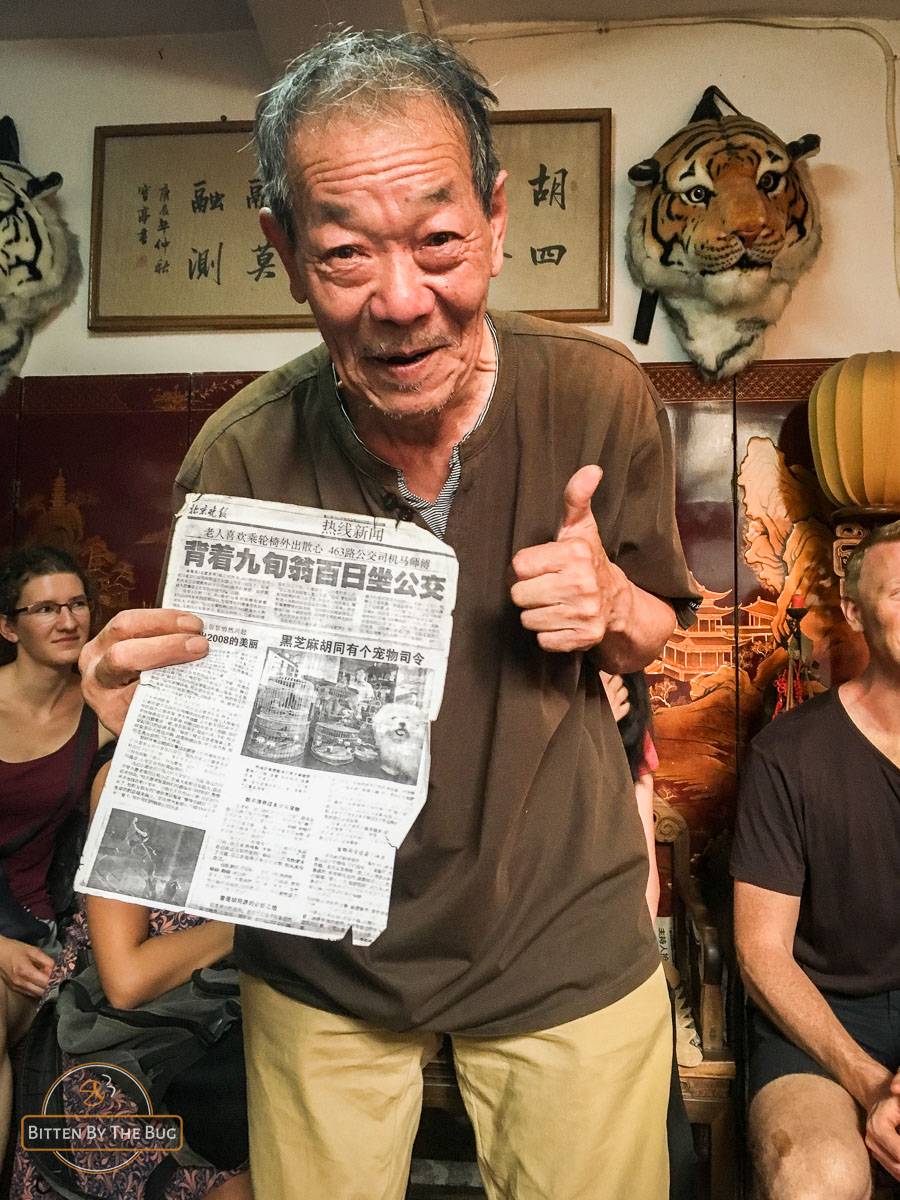 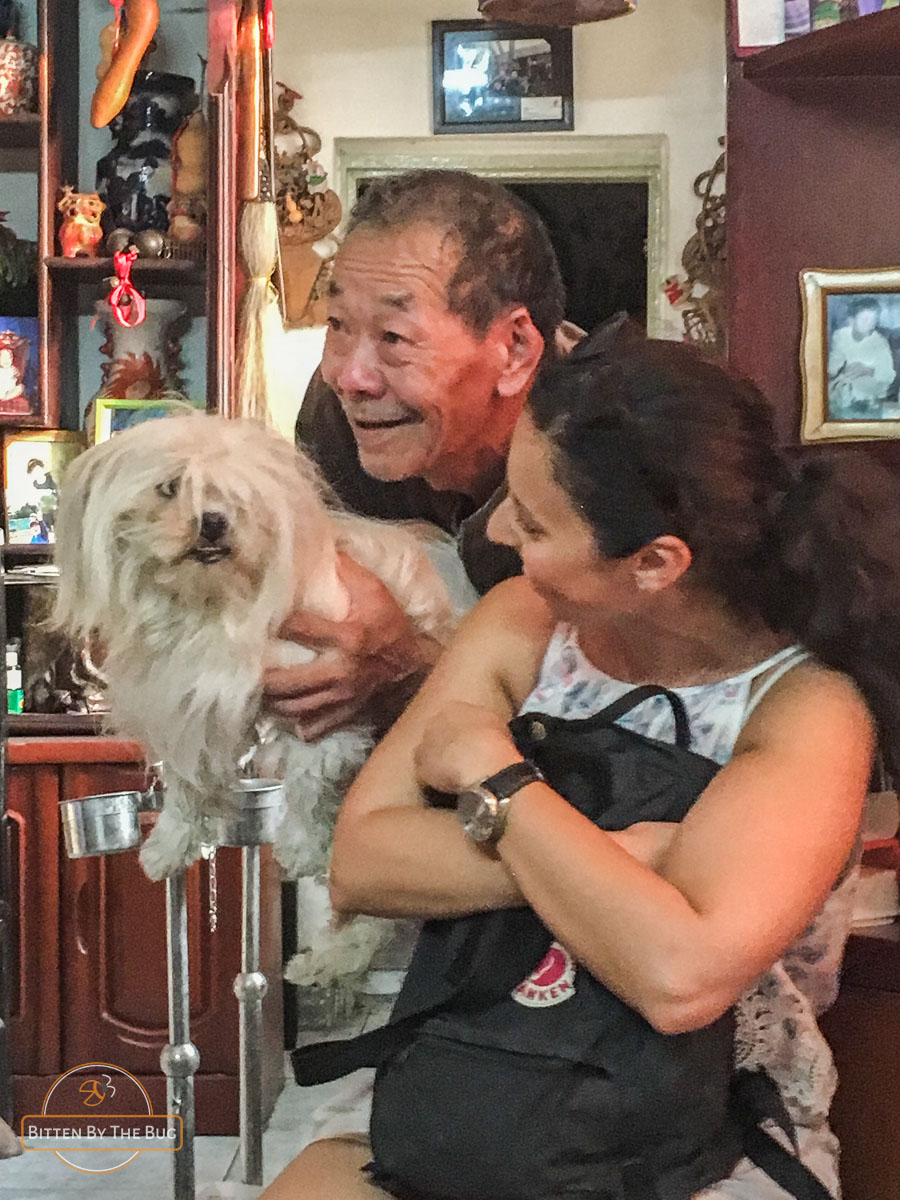 A cricket fight ends when a cricket is injured. If not killed in battle, a cricket can live up to 100 days. After that, a good cricket is burried in a tiny coffin and a funeral service is held for him. 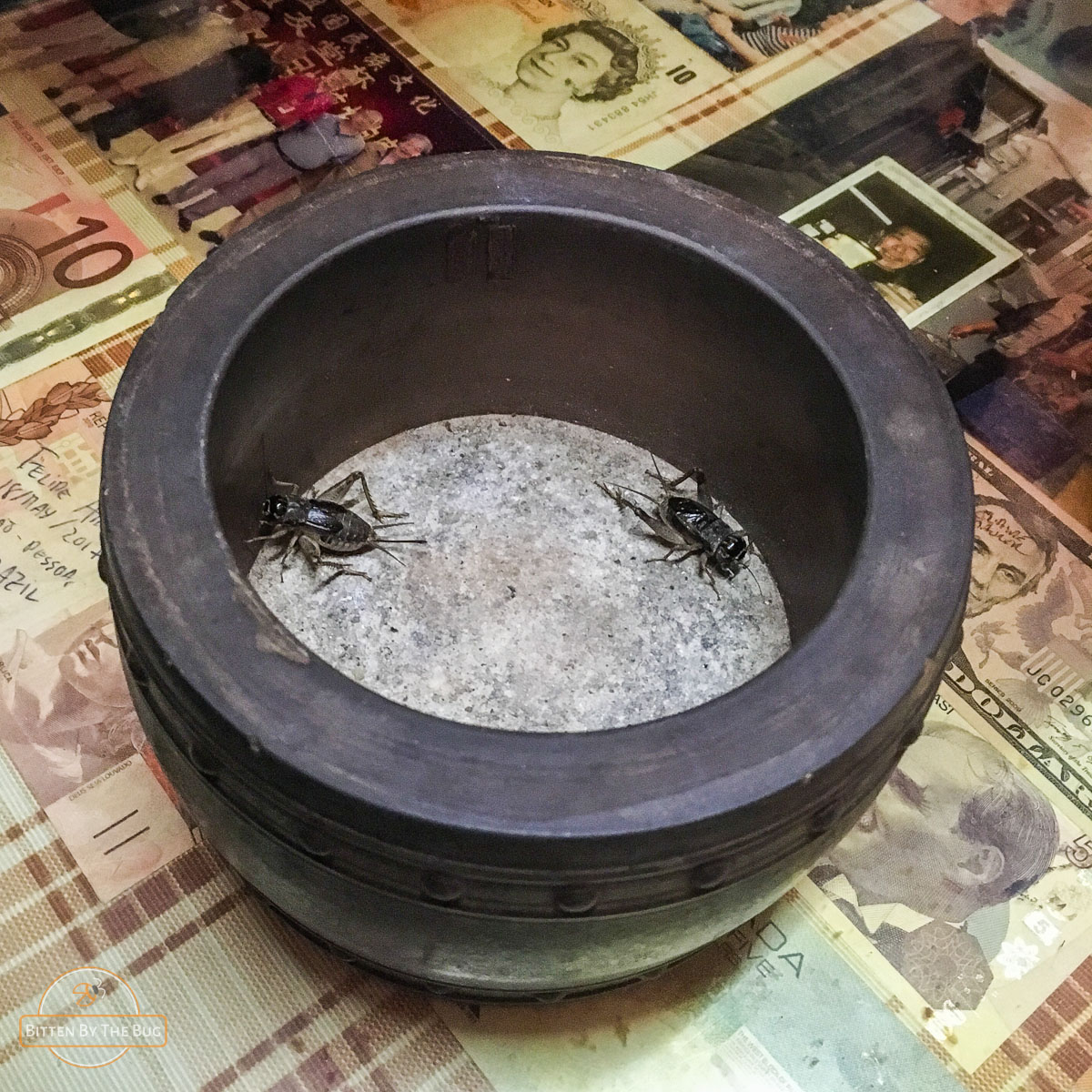 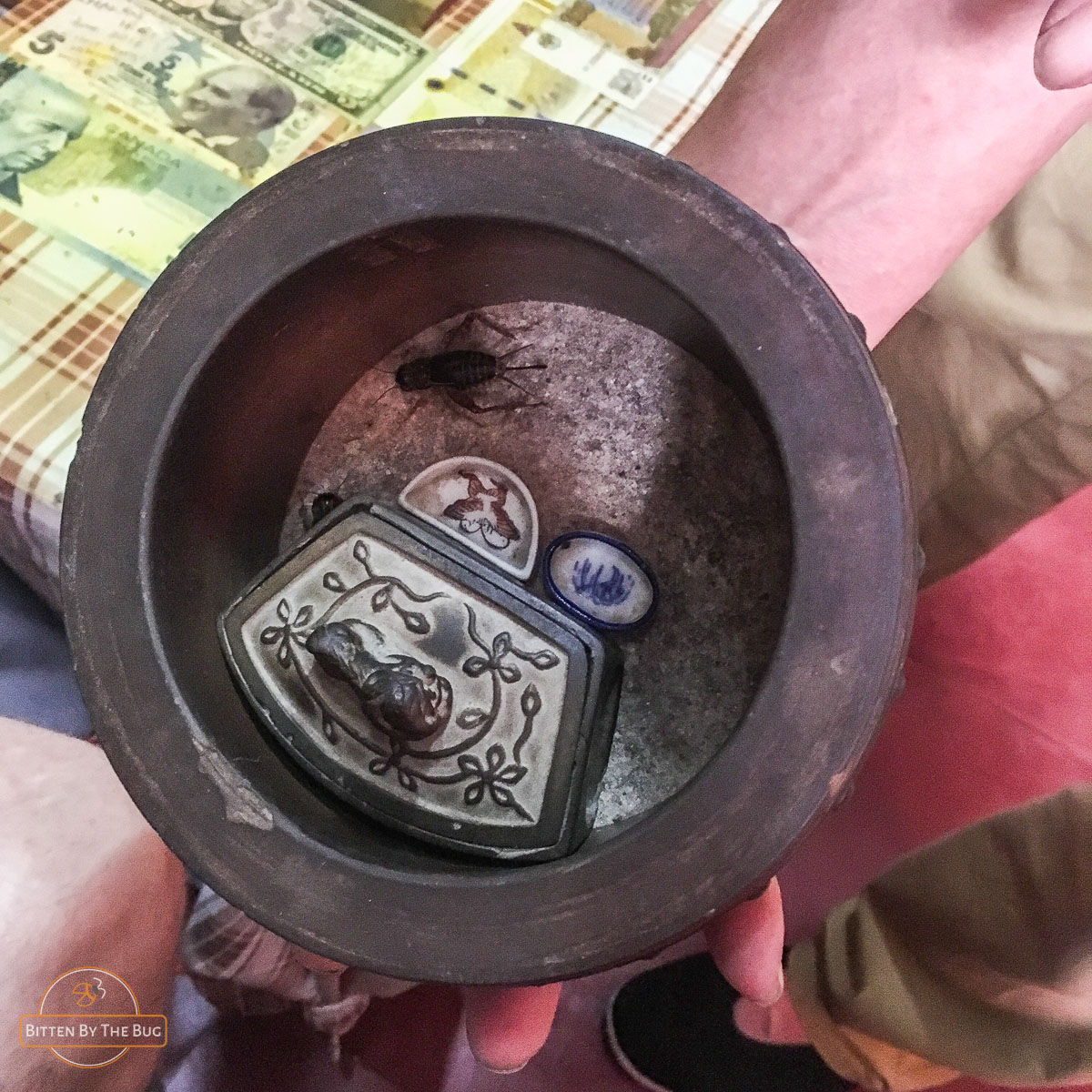 There is also a budget version of the cricket fights. Sometimes, a grasshopper is used instead. They can live up to 200 days and are much cheaper to buy and to maintain.

Finally, we were introduced to the last of Mr liu's pets, his fluffy dog and his beautiful lizard from Africa, which we were allowed to hold for a while. 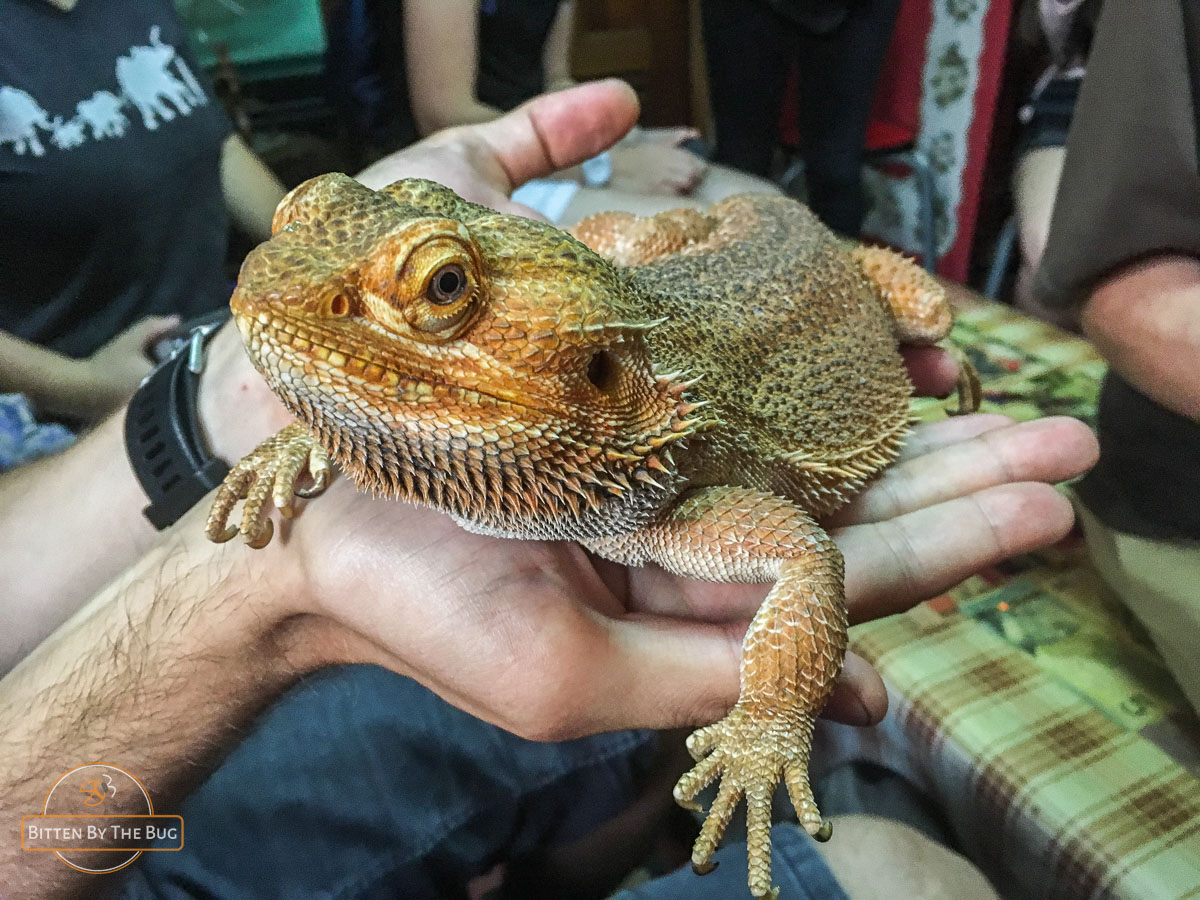 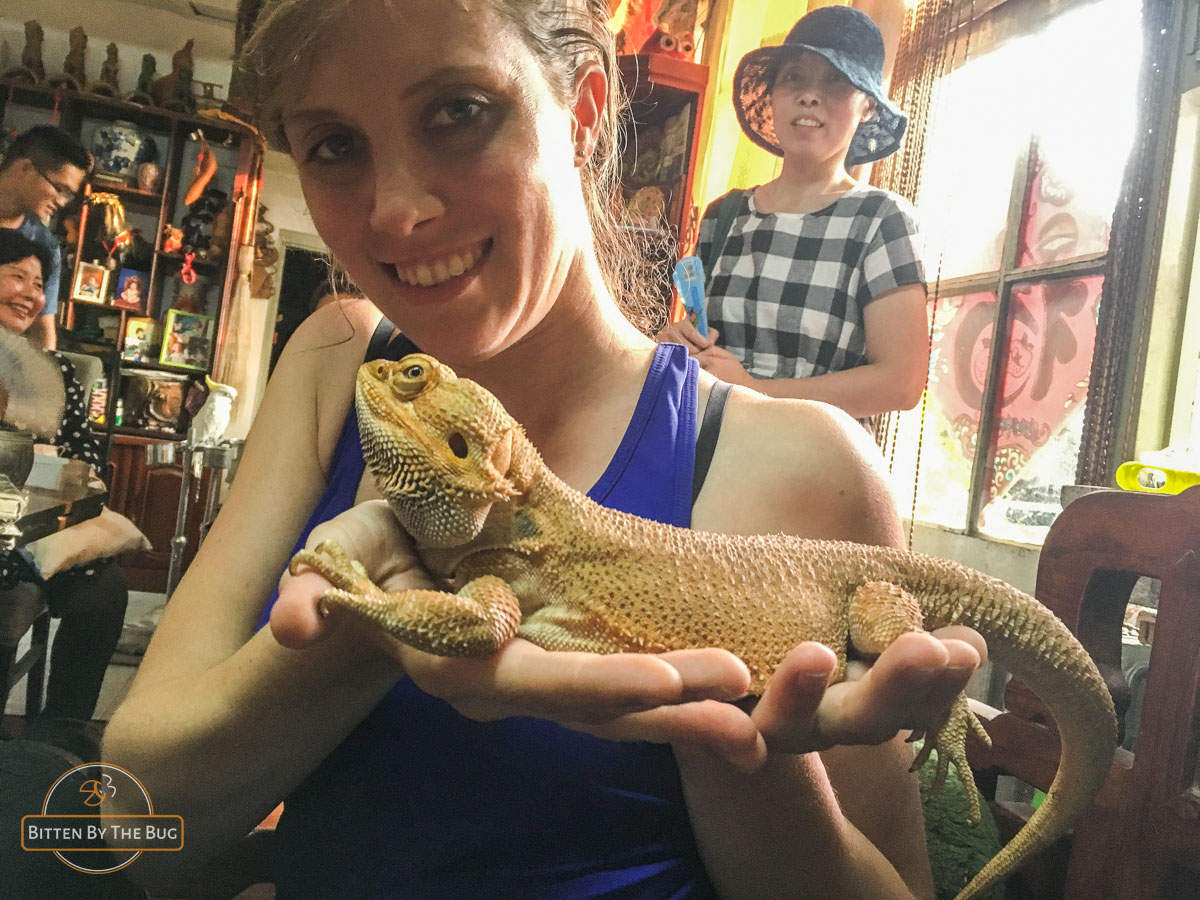 Back in the streets

We said goodbye to Mr liu and his pets and continued our tour. We walked past two brick and wood structures, the bell tower and the drum tower. Originally, these were used as musical instruments. Since the Han Dynasty, they're used for telling time. The bell tower means that people can enter the imperial palace, the drum tower means that soldiers will close the gate. 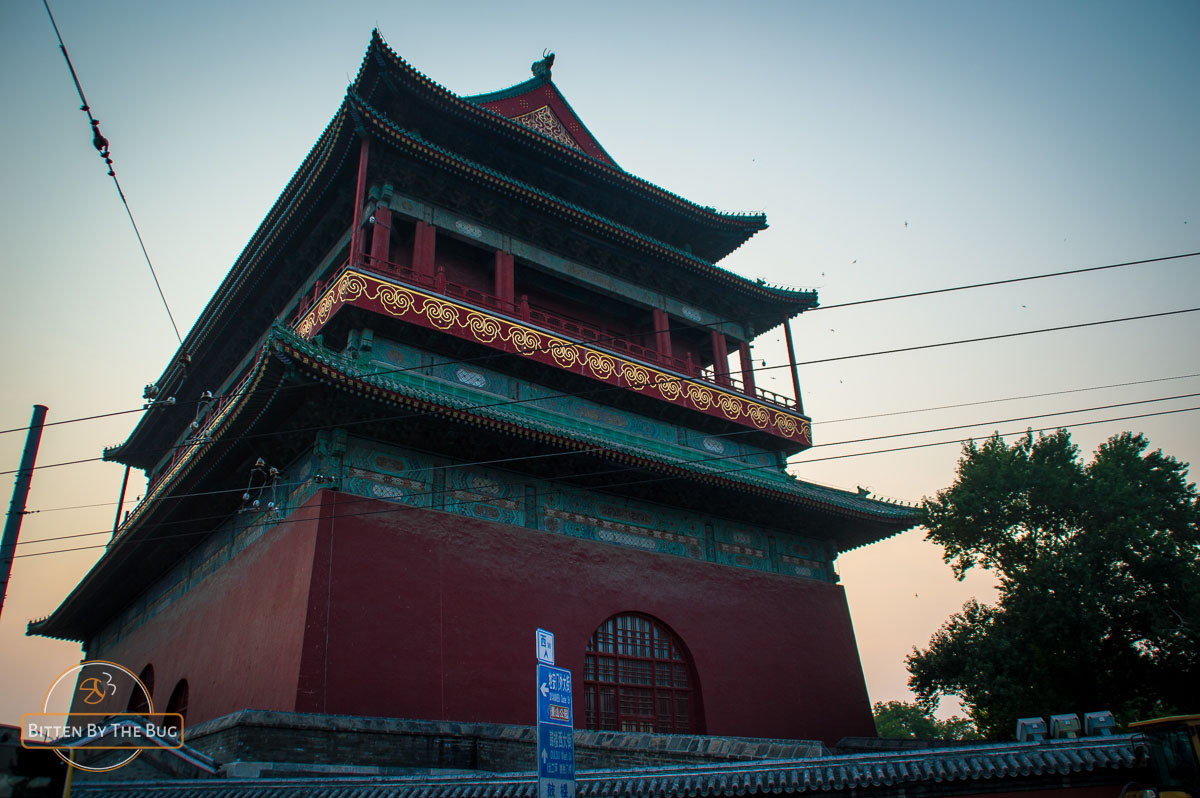 We continued through Yandaixiejie Street (Opium street) with its many shops and bars and arrived at the Back Lake, also built by the Mongolians. In Summer, people swim in the lake; in Winter, they ice-skate on it. 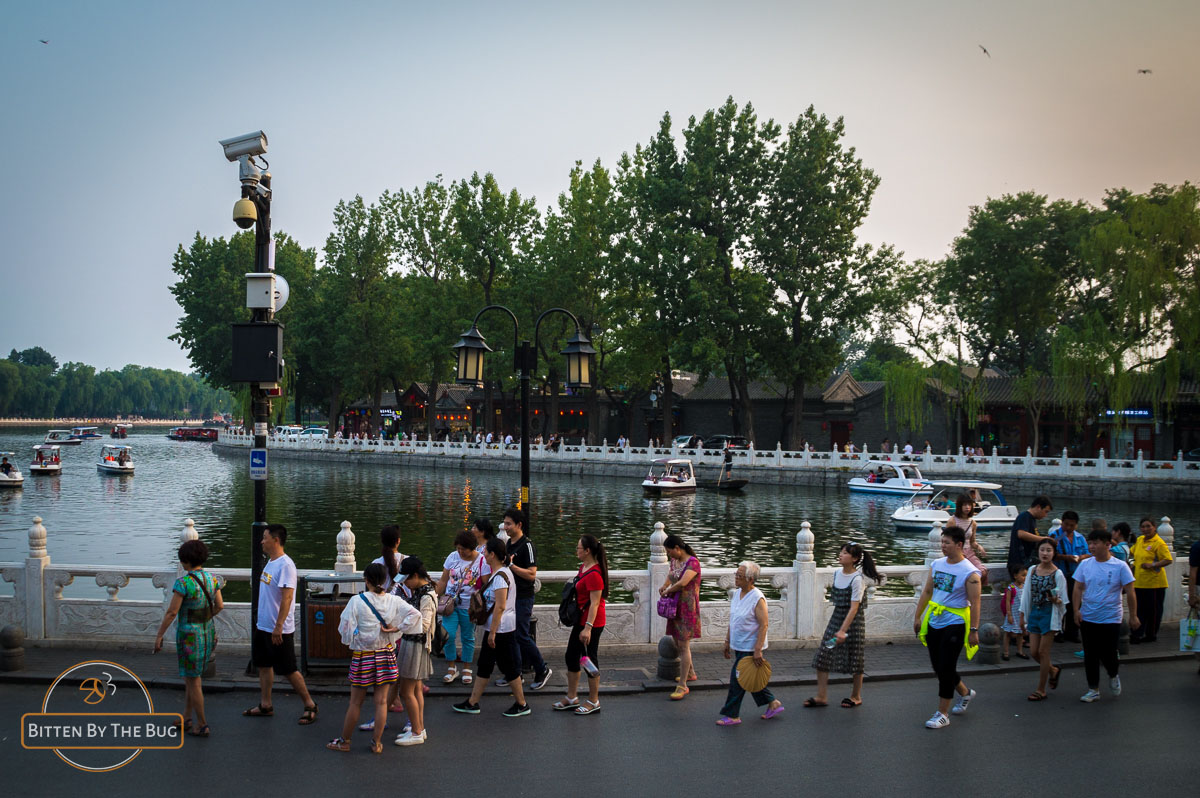 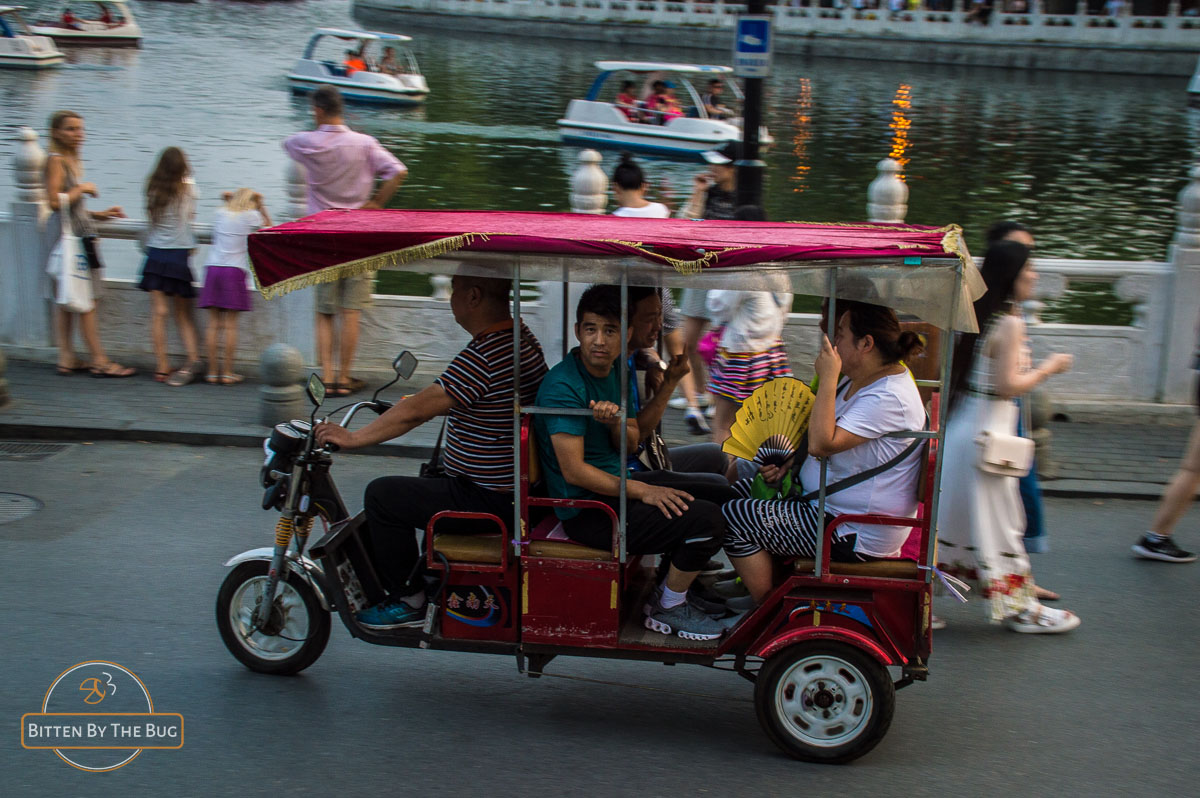 Our group was about to visit Beihai Park next, but as we had already been there and still wanted to see one other place today, we said goodbye and hurried to the metro station.

At a height of 405 meters, the CCTV Tower is the tallest structure in Beijing. This 44-story skyscraper serves as headquarters for China Central Televison (CCTV). I had seen a spectacular picture of the tower, which had made me want to go and see it for myself. Upon arrival, I understood the other picture had been taken from the sky or another high building, to which I had no acces. So I remained on level zero and settled on the inferior viewpoint I had. Even seen from below, the building remains quite impressive. 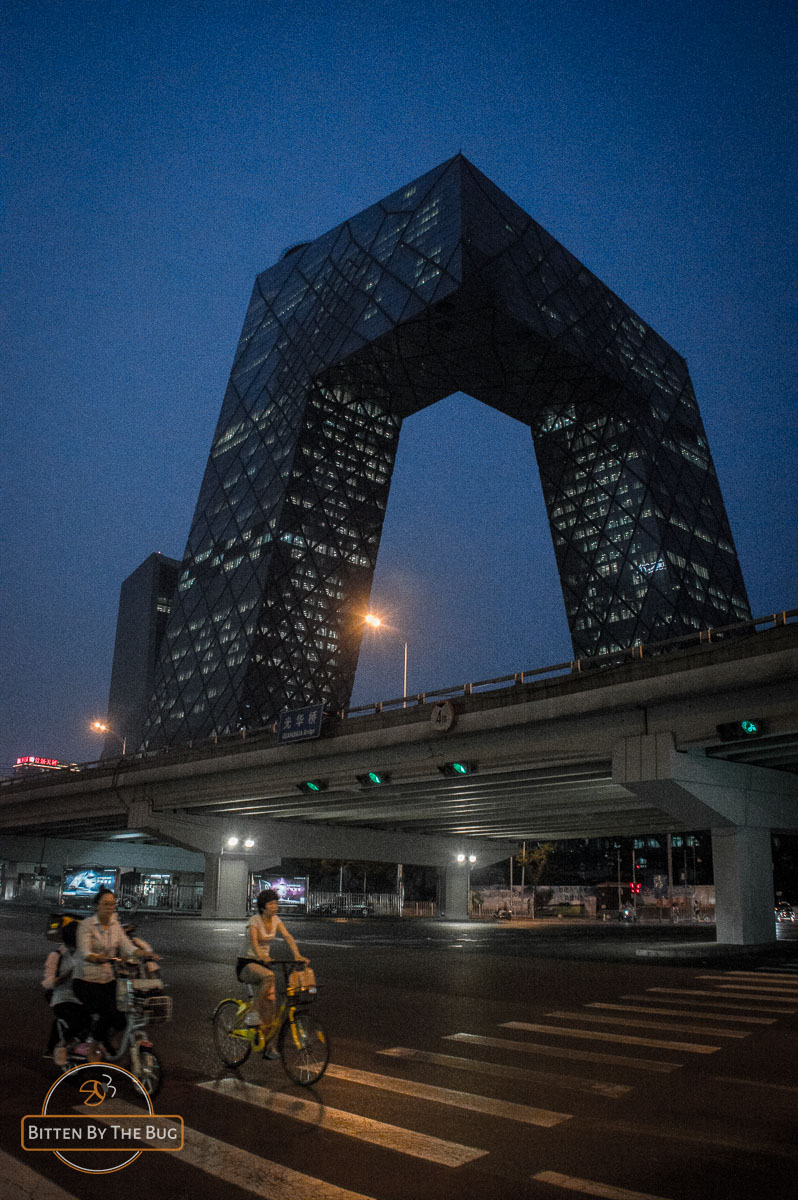 We couldn't dawdle too much around the CCTV Tower, as we had a rendezvous for a beer with a friend of ours and his Chinese girlfriend. We went to the Great Leap Brewing #6 tucked away in the Gulou Hutong.

Great Leap Brewing operates three brewpubs in Beijing, two in the Doncheng District and one in the Sanlitun neighborhood of the Chaoyang District. Particular is that the microbrewery produces beer incorporating traditional Chinese ingredients.

We installed in the beer garden of a converted courtyard house and ordered several of their craft beers. Coming from Belgium, my standards for beers are rather high, but I must say their beers are decent.

In Great Leap Brewing #6, they don't serve food, but they were totally okay with us ordering food and eating it there. 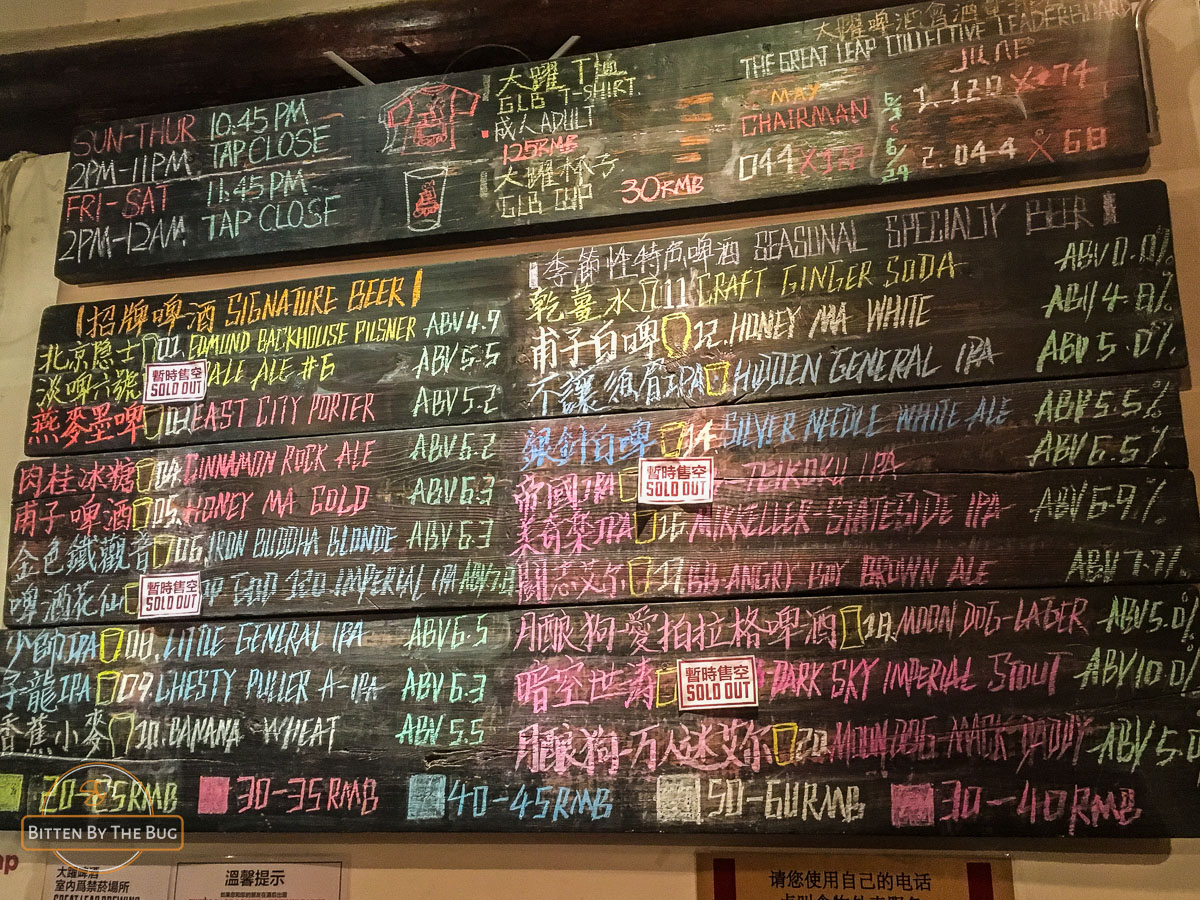 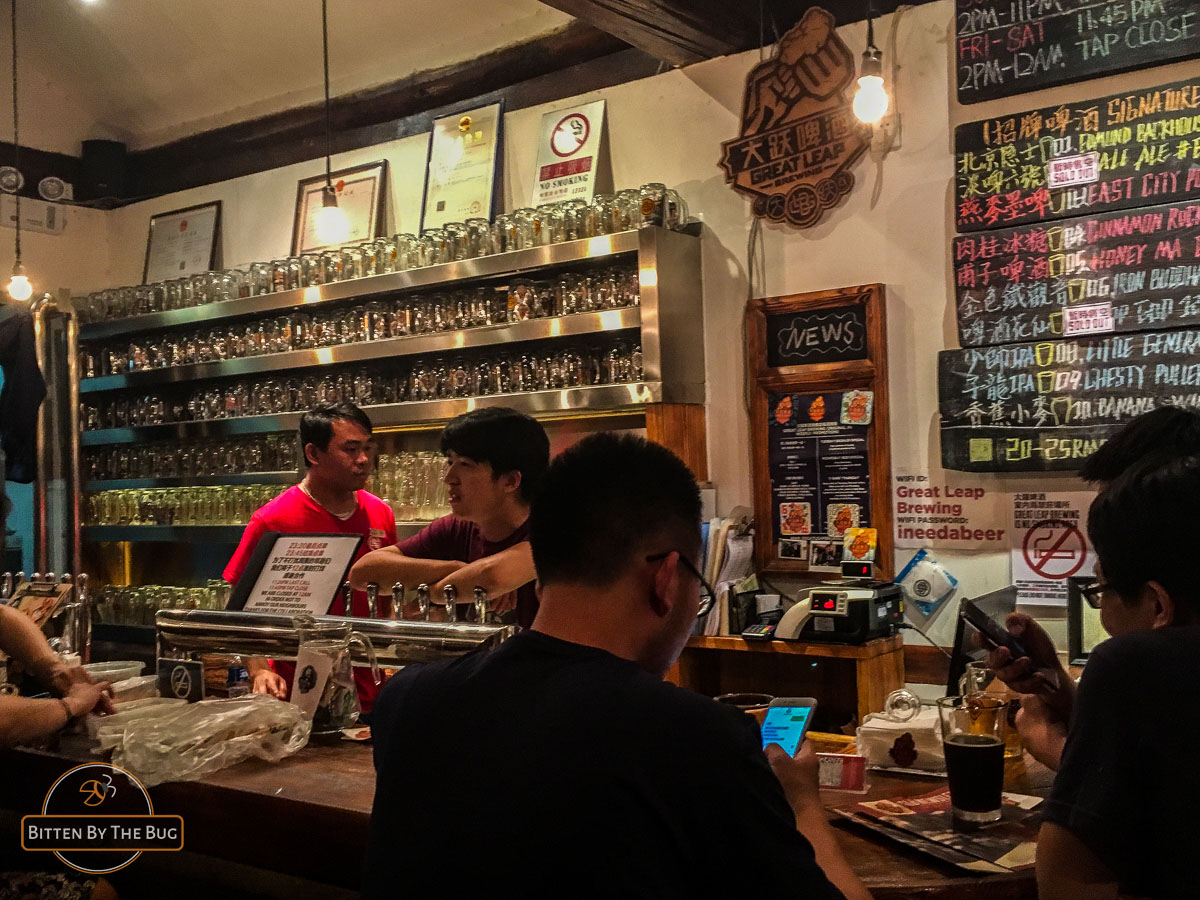 Around 23h, we guessed it was time to leave if we still wanted to catch a metro. Unfortunately we didn't know the metro closes extremely early in Beijing. The last one goes around 22h30, which is already very late for most Chinese. Their rythym is very different from ours: they go to bed early and wake up as early as 5 am. Going out after work means having dinner together and maybe do karaoke, but they never stay up late.

In the end, using a Chinese app similar to Uber, we managed to find a cab that brought us all home.