El Fontán offers authentic, flavorful food without pretense. This tapas bar in the Marolles district is simple, but genuine. Add some background Spanish chatter and you've got the perfect setting for a casual dinner with friends. 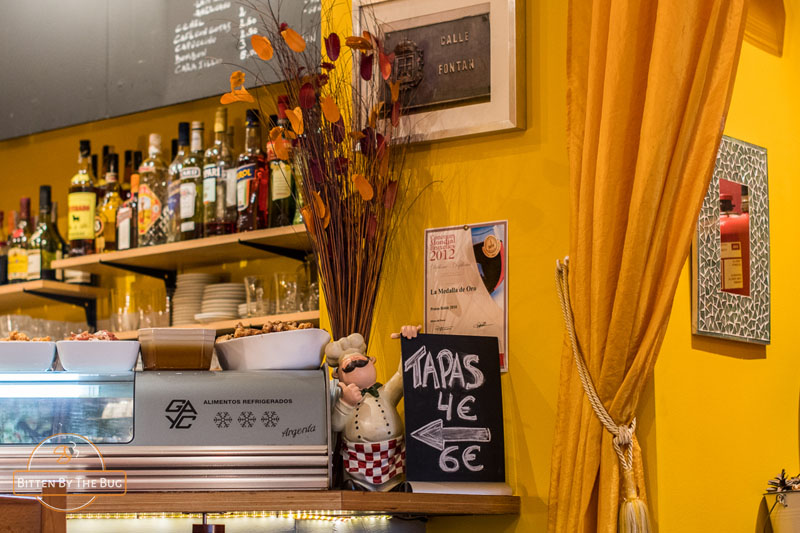 Of course, you're free to take your date out for tapas, but it's more interesting if you invite more people, because... the larger your company, the more tapas you get to try ;-) In the end, that's what tapas is all about: share food with the people you care about. If you're unfamiliar with the concept, chef Henrique and his staff won't mind explaining how it works.

I was surprised to learn how varied the selection of tapas is. The upcoming vegetarian movement hasn't gone unnoticed by the chef, who now caters more original vegetarian tapas, such as grilled eggplant, mushroom with garlic, zucchini fritters, salmorejo, patatas bravas... 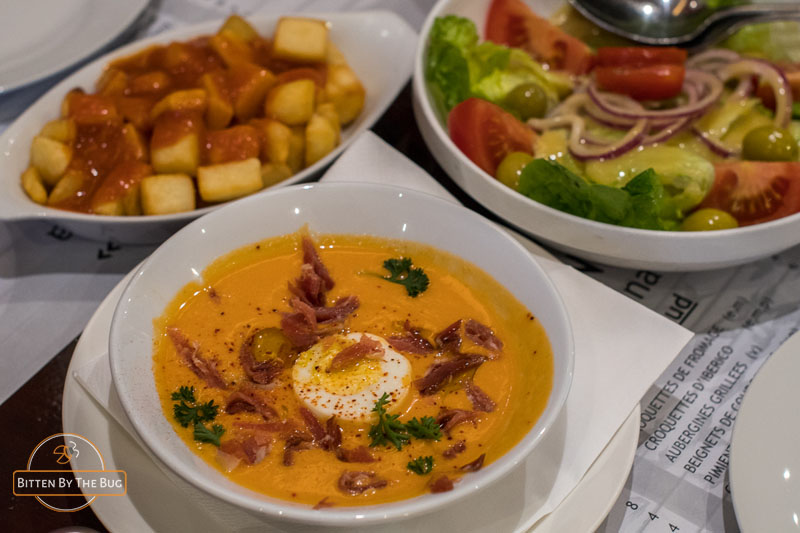 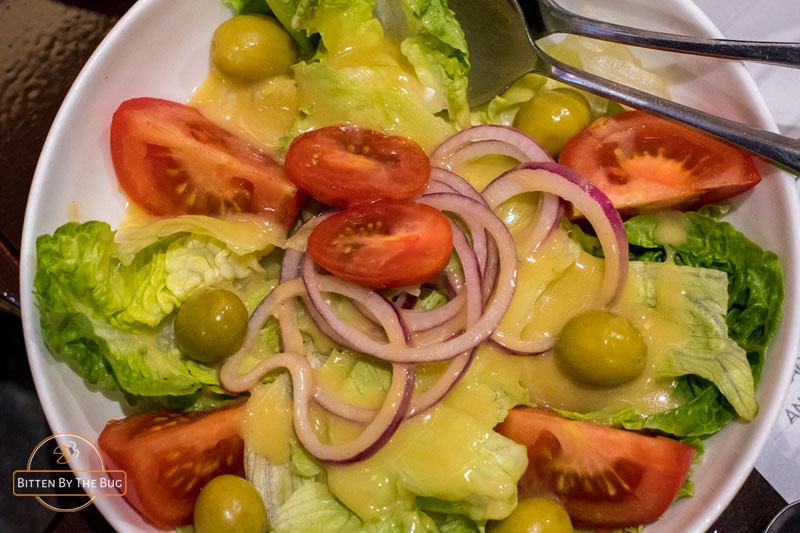 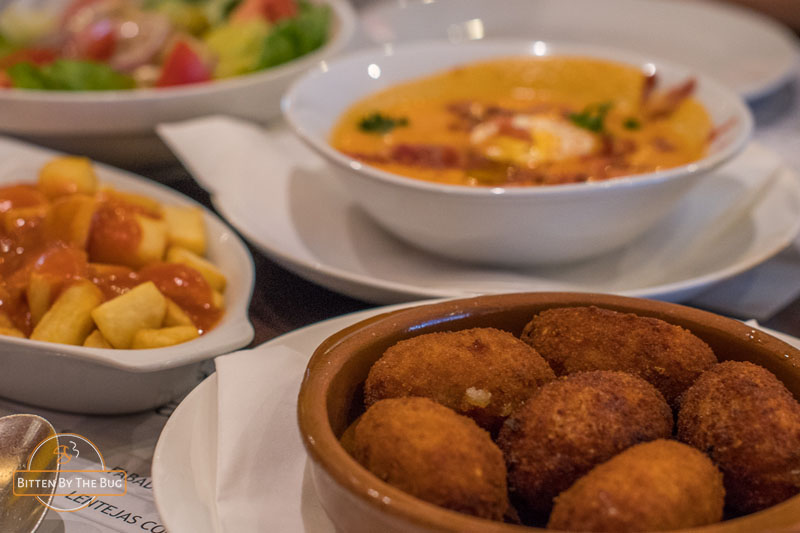 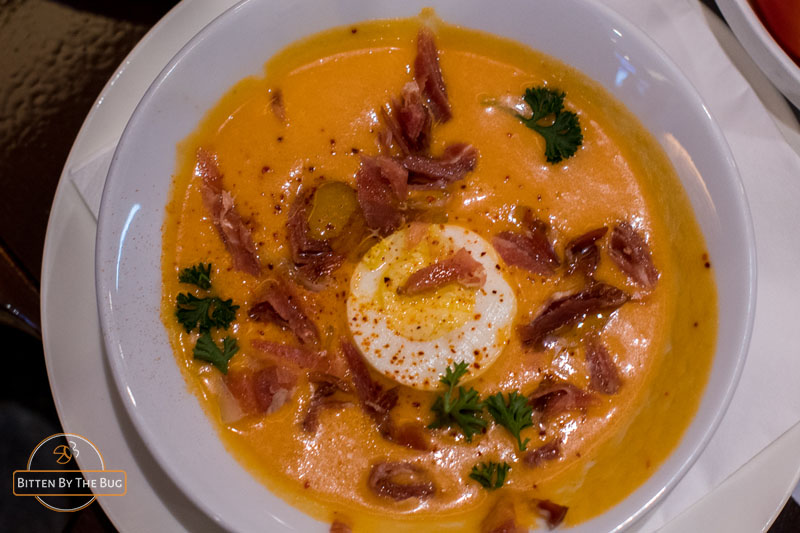 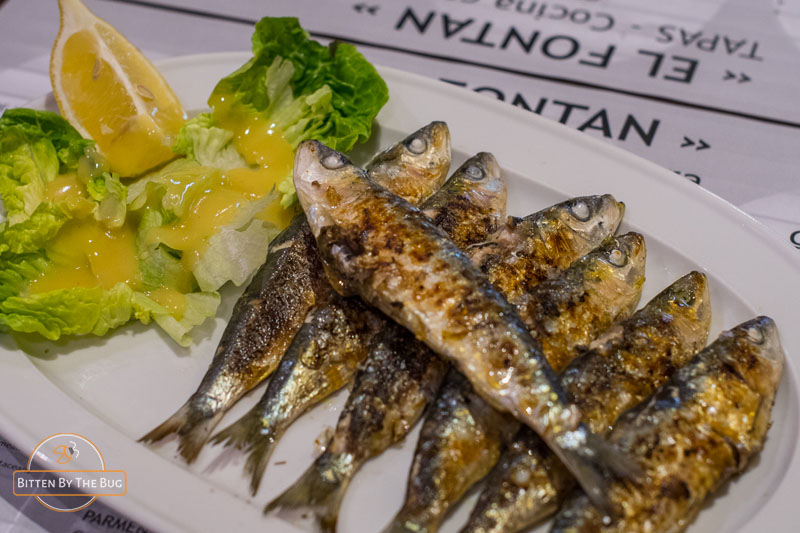 But meat lovers, do not despair. The specialities of the house are Pulpo a la Gallega (Galician-style octopus) and fabada, a traditional dish from Asturias. Fabada is a hot and heavy dish and for that reason, it is most commonly eaten during Winter. It is made with large dried, white beans, shoulder of pork or bacon, black pudding, chorizo, and often saffron. 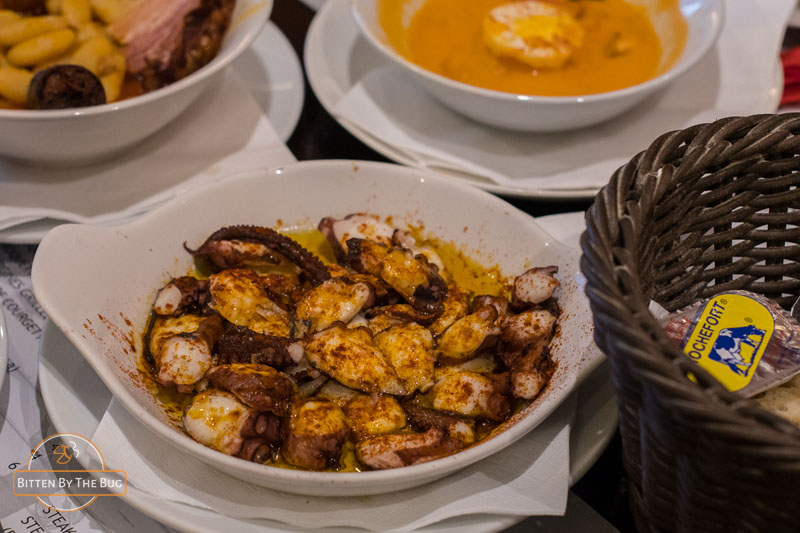 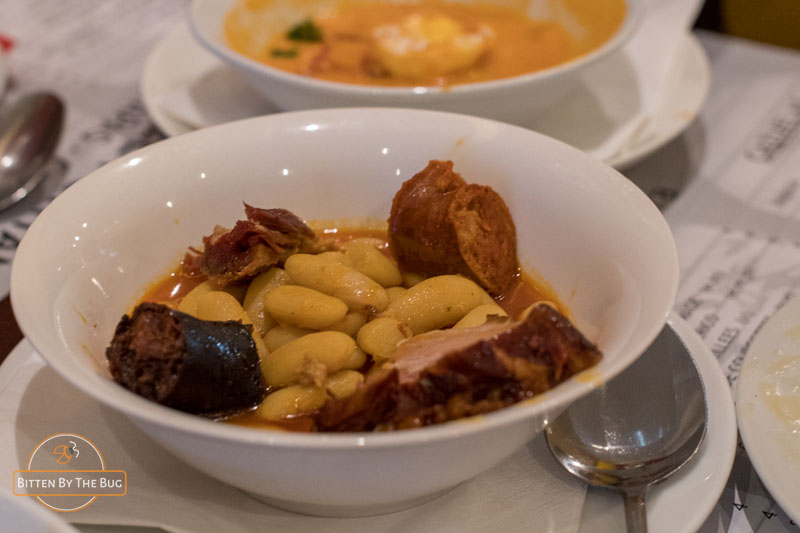 Chef Henrique's Fabada was also appreciated by the jury of an international Fabada competition in which he participated. Out of 300 participants, Henrique was one of the 22 finalists who were invited to Spain to present their fabada there. He came back with a nice certificate that now adorns the wall of his restaurant.

The fabada illustrates just how much El Fontán focuses on 'Cocina Casera': simple, traditional and home-made dishes. Nothing too extravagant, just authentic tapas. There is a wholehearted and heartfelt touch of homeliness in the cooking which I found to be very endearing. 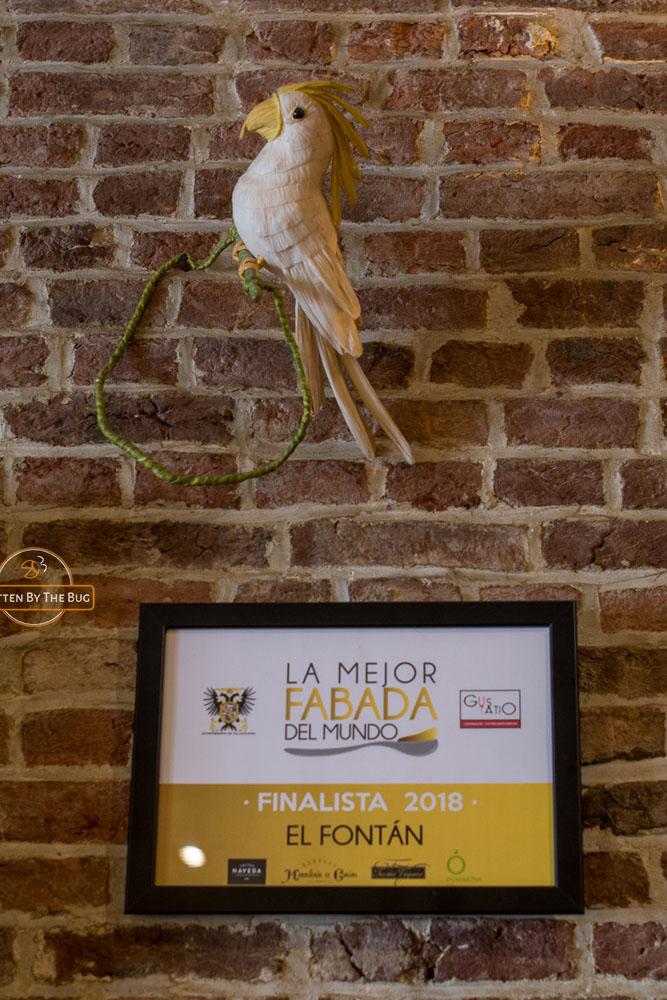 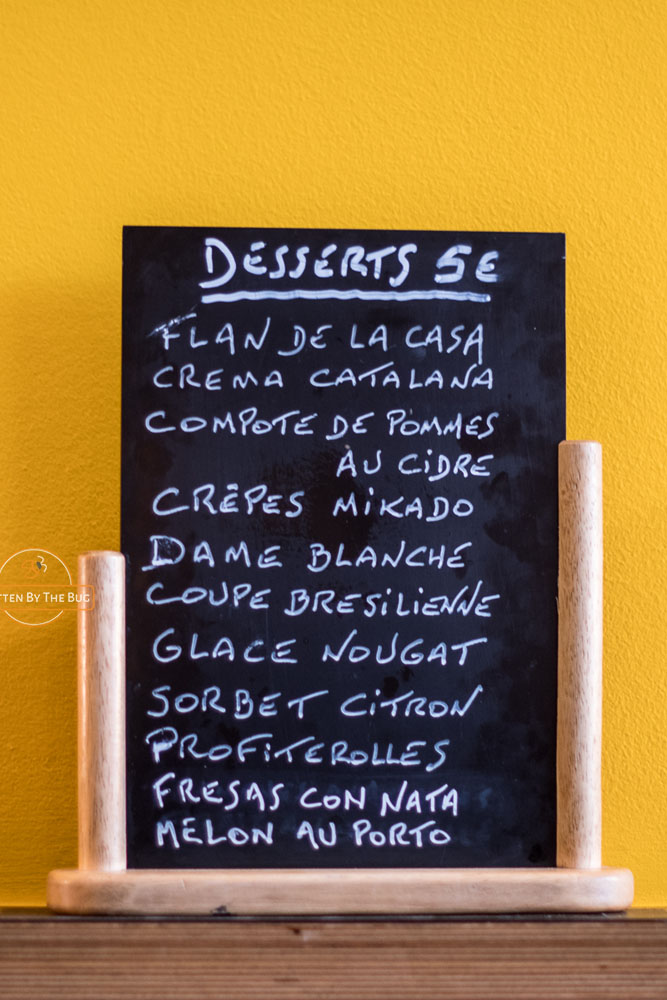 In the back of this small restaurant with yellow walls, several tapas are on display on the wooden-style counter. It is possible to sit there, but personally, I think it is a dangerous place. Facing the food, I would just order them all. 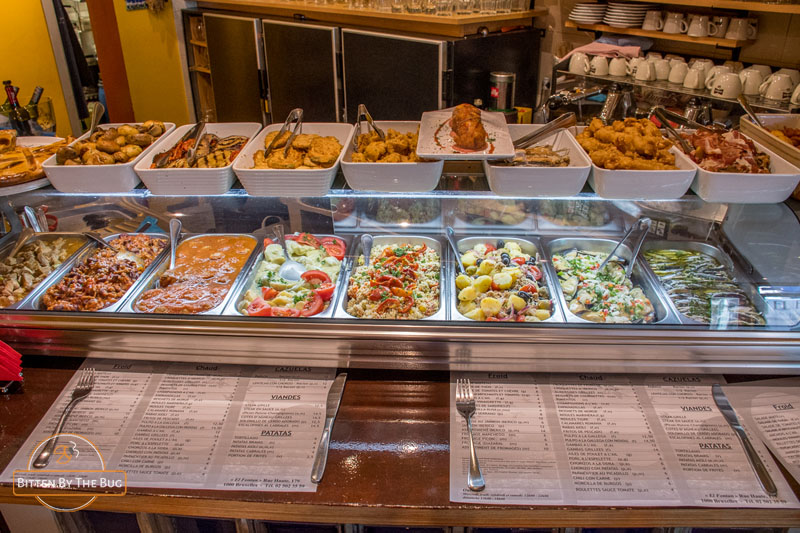 If you want to protect yourself from gluttony, you can pick any other table and you'll be able to overlook the menu at any time to have more tapas. The large chalkboard displays the different options along with the suggestions of the chef. Otherwise, the functional place-mats display the menu too. 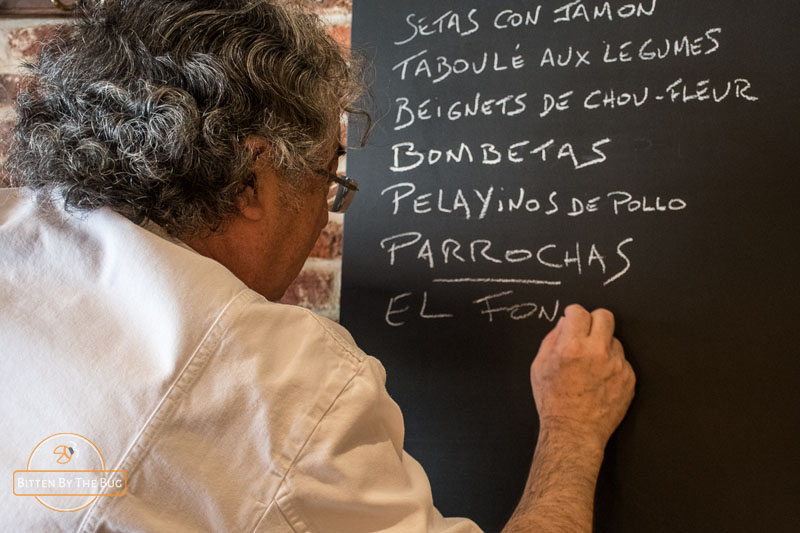 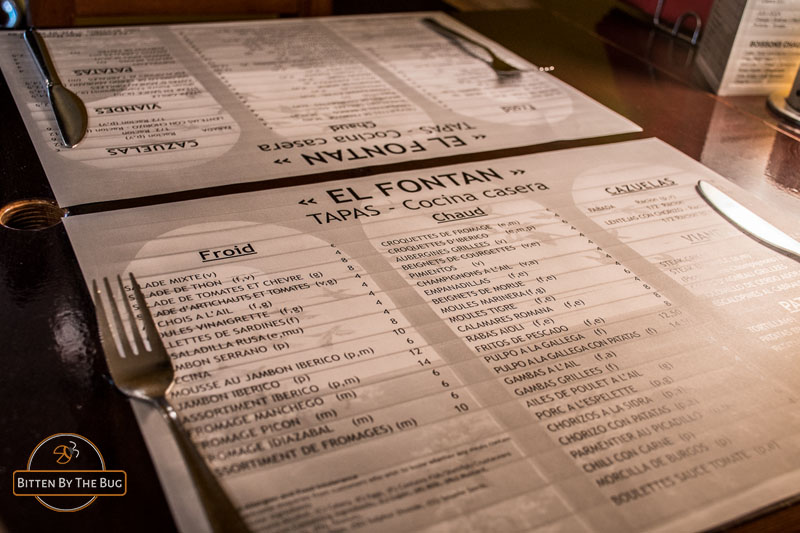 Most tapas range between 4 and 8 euros, so the final bill will remain very reasonable. If you're two persons, 5 or 6 tapas should be sufficient. If you want more, you can order more at any time.

You cannot have Spanish tapas without Spanish drinks. How about some sangría, Spanish wine or tinto de verano? Beer lovers can try some of the most popular Spanish lager beers. Although they're not that different (my apologies to the connoisseurs), several brands are available, such as San Miguel, Mahou, Estrella de Galicia and Alhambra. 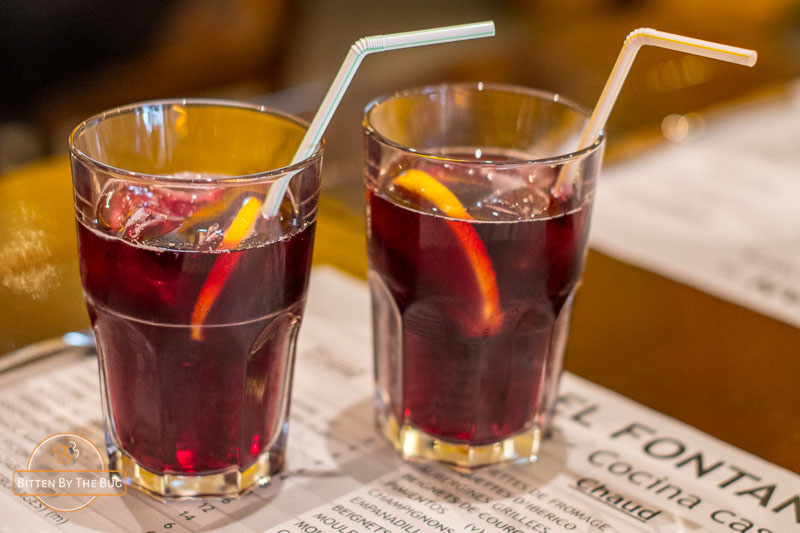 Everything about this places exudes a Spanish vibe. Chef Henrique is originally from Oviedo, and his staff is Spanish as well. It is thus little surprising that many Spaniards feel at home in El Fontán. Many of them have become regulars, which can only be a good sign.

As a favour to the Spanish customers, the tapas bar opens a bit later on Sundays to make sure the churchgoers coming back from the Spanish mass on Place Jeu de Balle still have a place to sit.

It doesn't mean the bar exclusively targets Spaniards (far from it). As is customary to Spanish culture, everyone is welcome here and will be received with a warm smile. 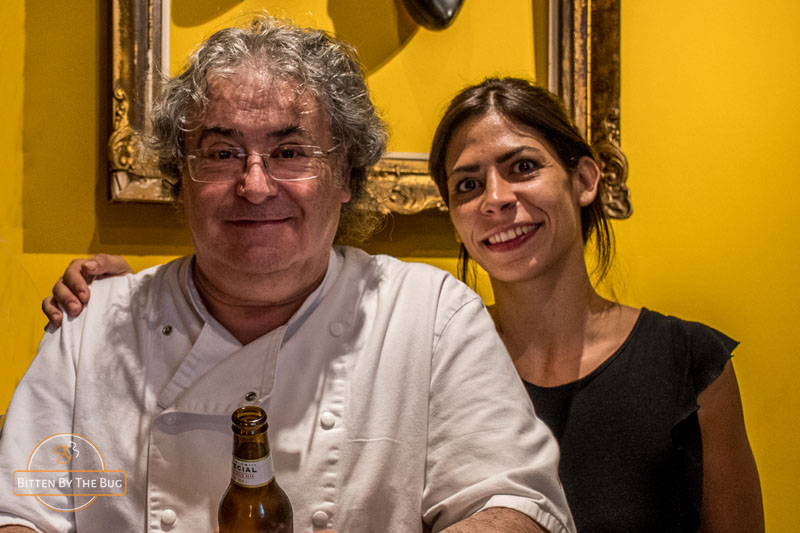 The interior design, which is quite sober, pays tribute to chef Henrique's hometown Oviedo. And so does the name. Actually, 'El Fontán' refers to the central plaza of Oviedo, where in earlier times the cattle came to drink. Today, this is where the mercado of Oviedo takes place. The frames decorating the walls show what this Plaza used to look like, and what it has become today. 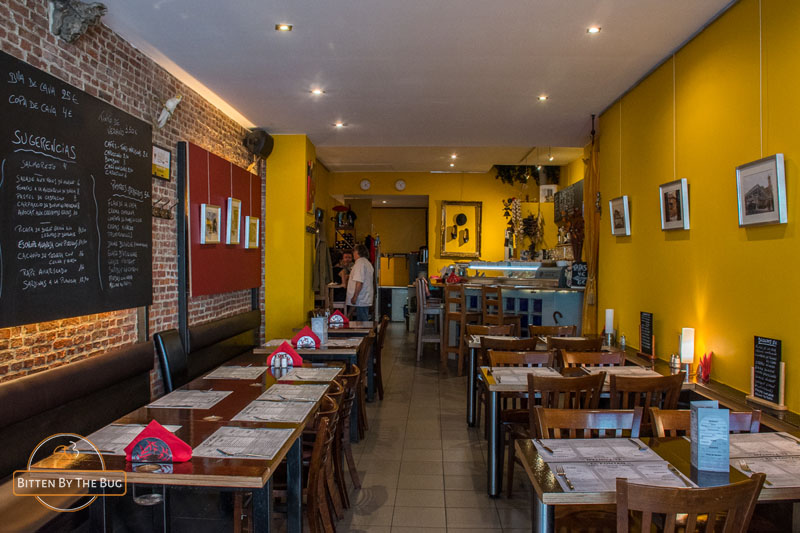 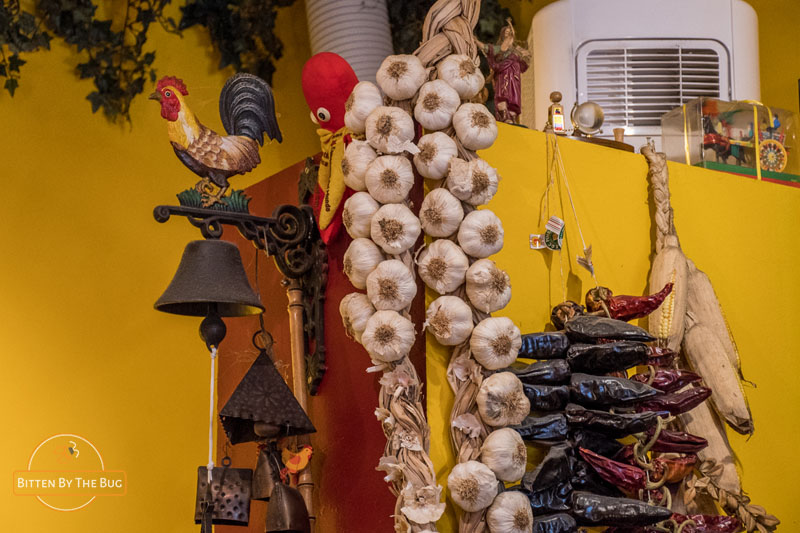 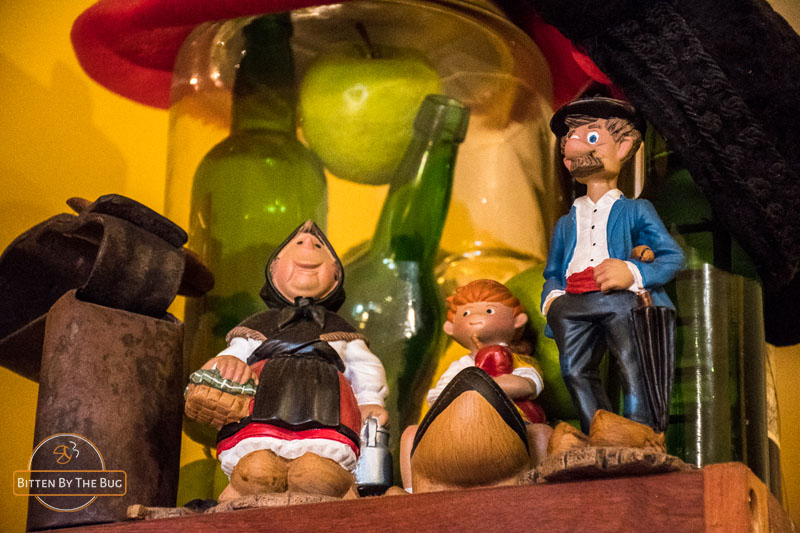 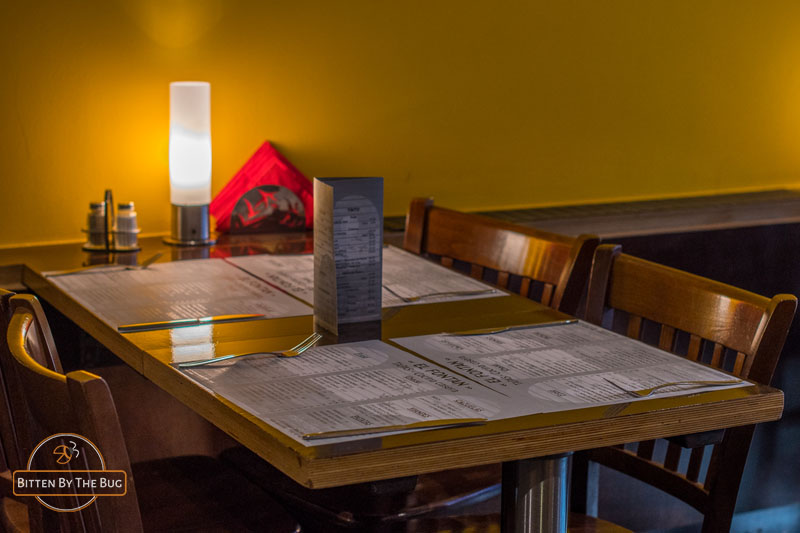 Having relocated a few times and finally moved here in 2006, chef Henrique decided the Marolles district was the right place for him. It's easy to understand why. The atmosphere is nice and its location is convenient between Louise, Porte de Hal and Chapelle.

In the afternoon, when every other restaurant is closed, you can still go to El Fontán for a bite. It is open every day from 12:00 to 22:00. Closing time is definitely too early for a Spanish bar, but that's the only bad point I can think off ;) 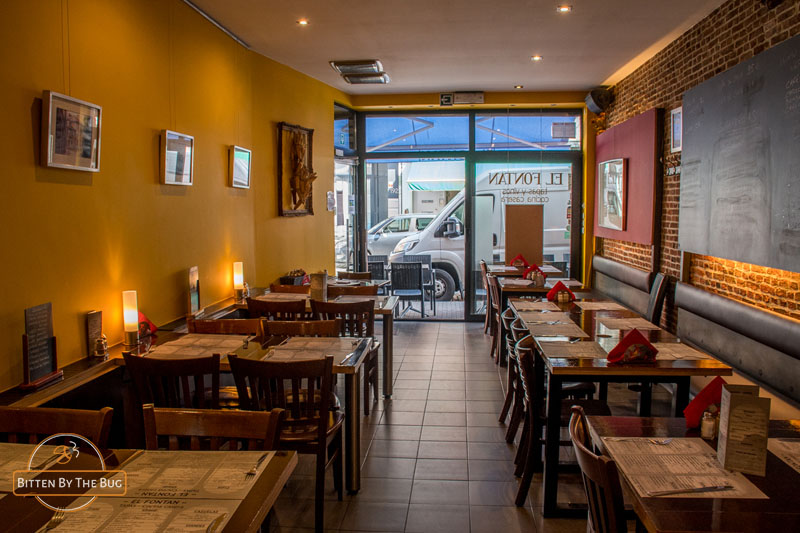 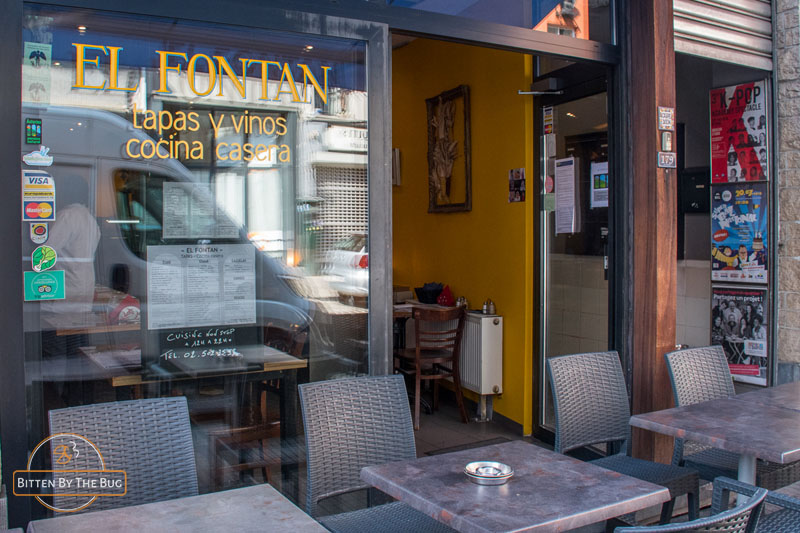 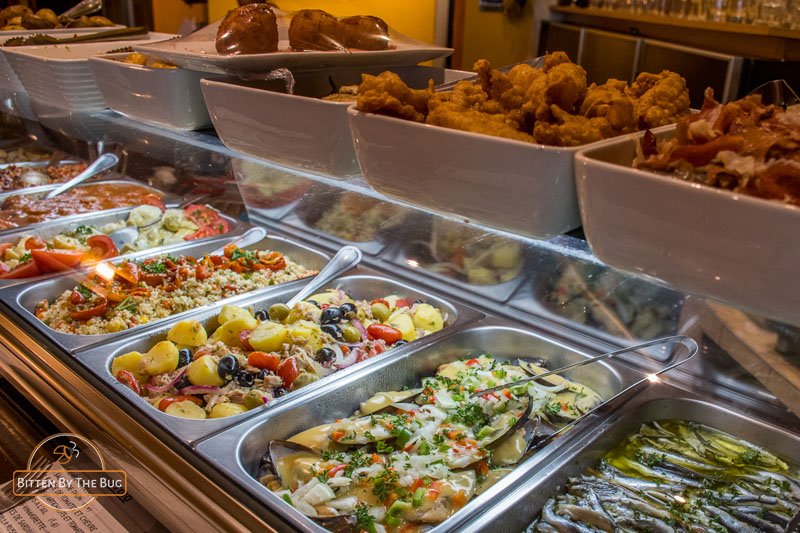 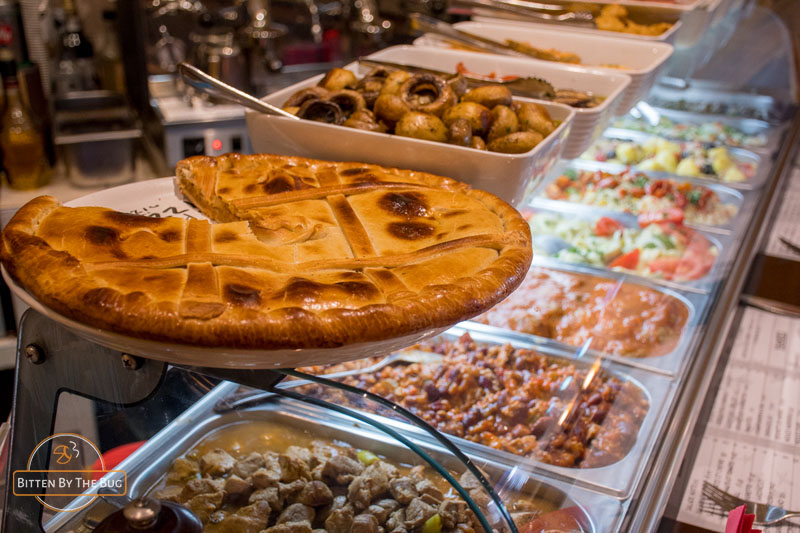 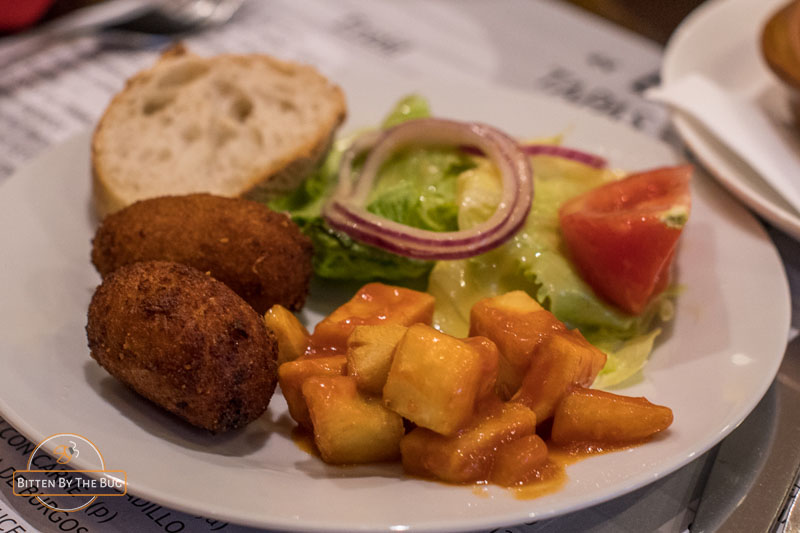 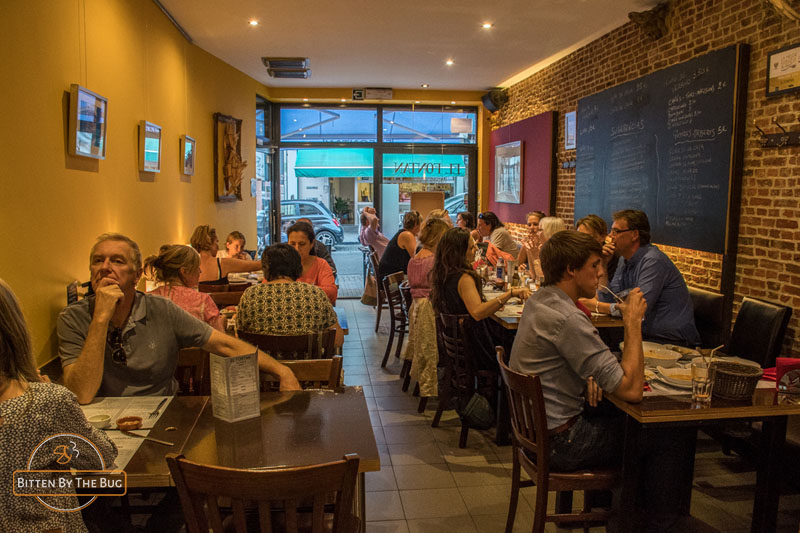