Playa Manglito and the Yumuri Canyon

Playa Manglito and the Yumuri Canyon

Our stay in Baracoa had sadly come to an end. In order to make the most out of our last day, we woke up very early (again). In Belgium, the early alarm would instantly put me in a bad mood, but in Villa Paradiso the pain is soothed by the beautiful sunrise you get to see straight from bed.

Roberto arranged a taxi to take us to the area east of Baracoa. Our driver was Octavio, a proud owner of a beautiful old American car.

Along the way, Octavio made a few quick stops to let us enjoy the surroundings and take some photos. Below is a shot of the most famous boobs of Baracoa: 'las tetas de Santa Teresa'. 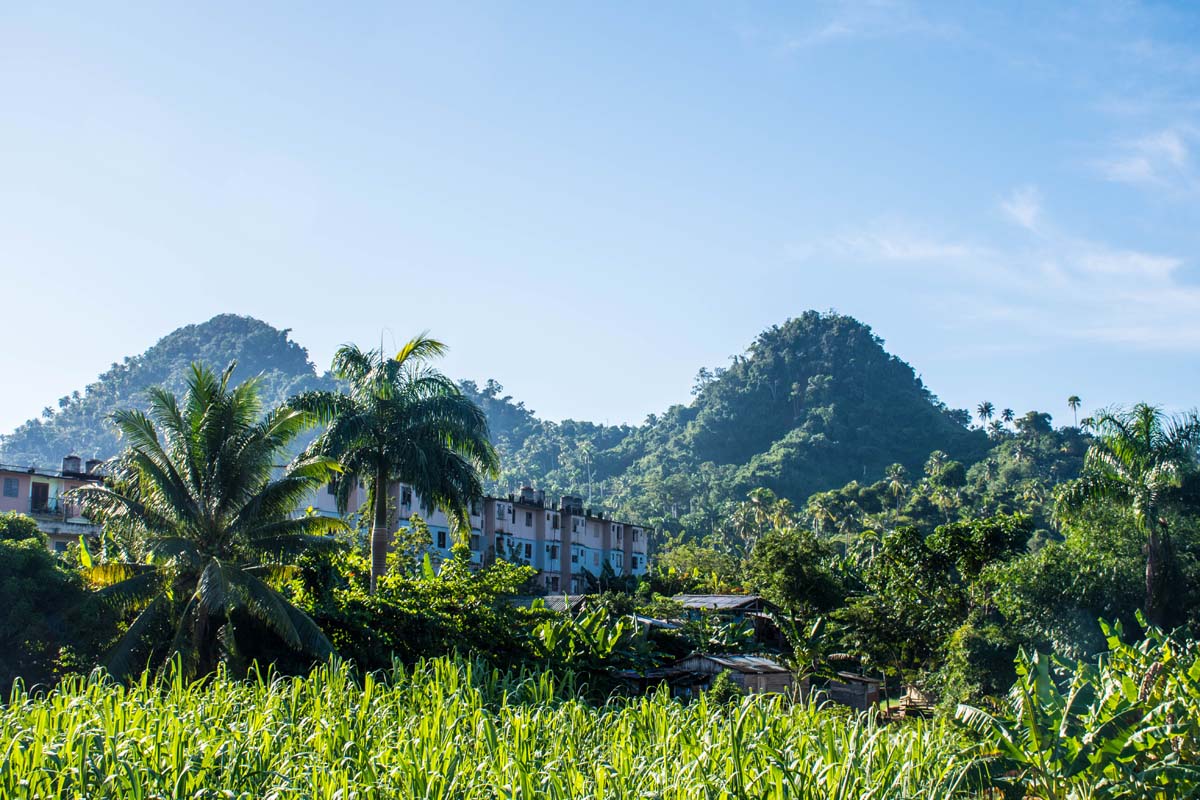 Our first real stop was a family-run cacao farm. Roberto had instructed us to ask for the daughter, because the mother talked too much and we didn’t have that much time today. And indeed, the daughter was quite straightforward in her explanations. She showed us the cacao fruit and clearly explained the different steps in the process of producing chocolate.

The cacao pod is filled with seeds enveloped by a white substance that tastes like lychee. These seeds are left in the sun to dry in a basket made of palm tree leaves. At this point, the seeds are very bitter, and taste a bit like coffee. Then, the women grind and roast the seeds. From the powder they make big balls of raw cacao. It’s still very bitter and not really tasty, but when some sugar is added it starts to resemble the chocolate we’re used to. 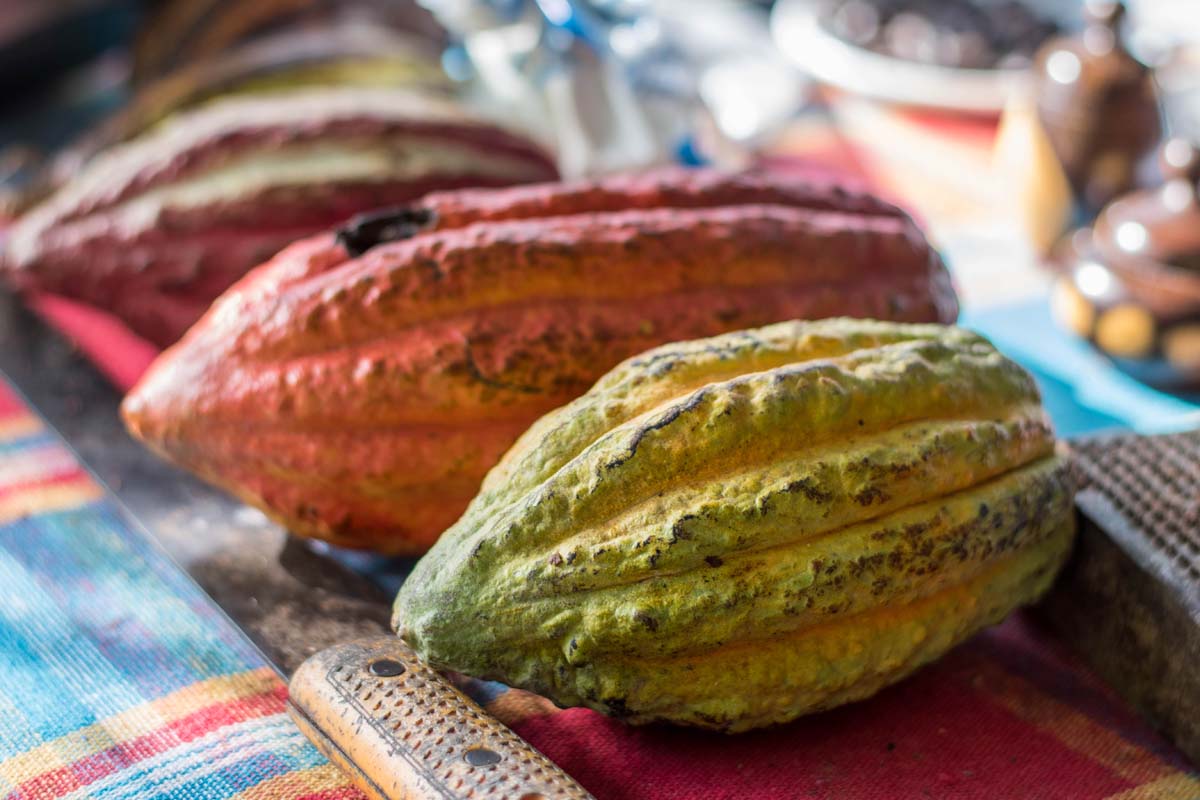 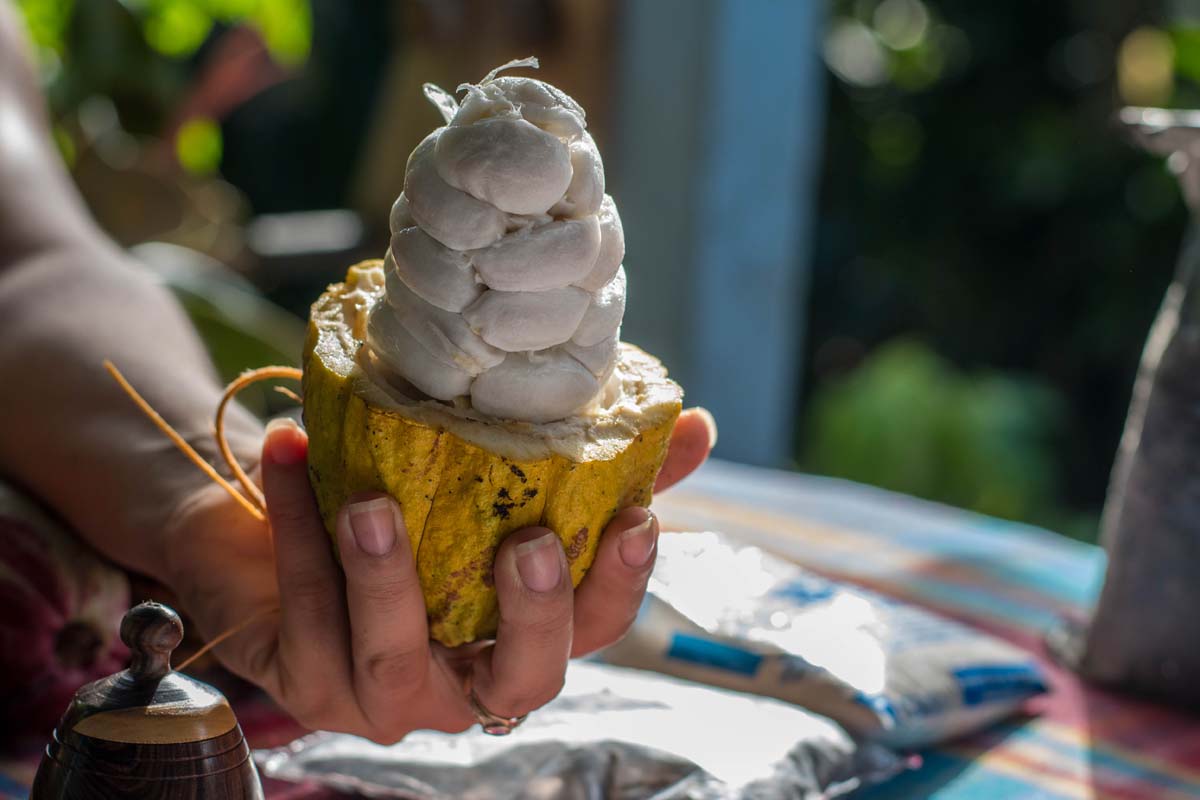 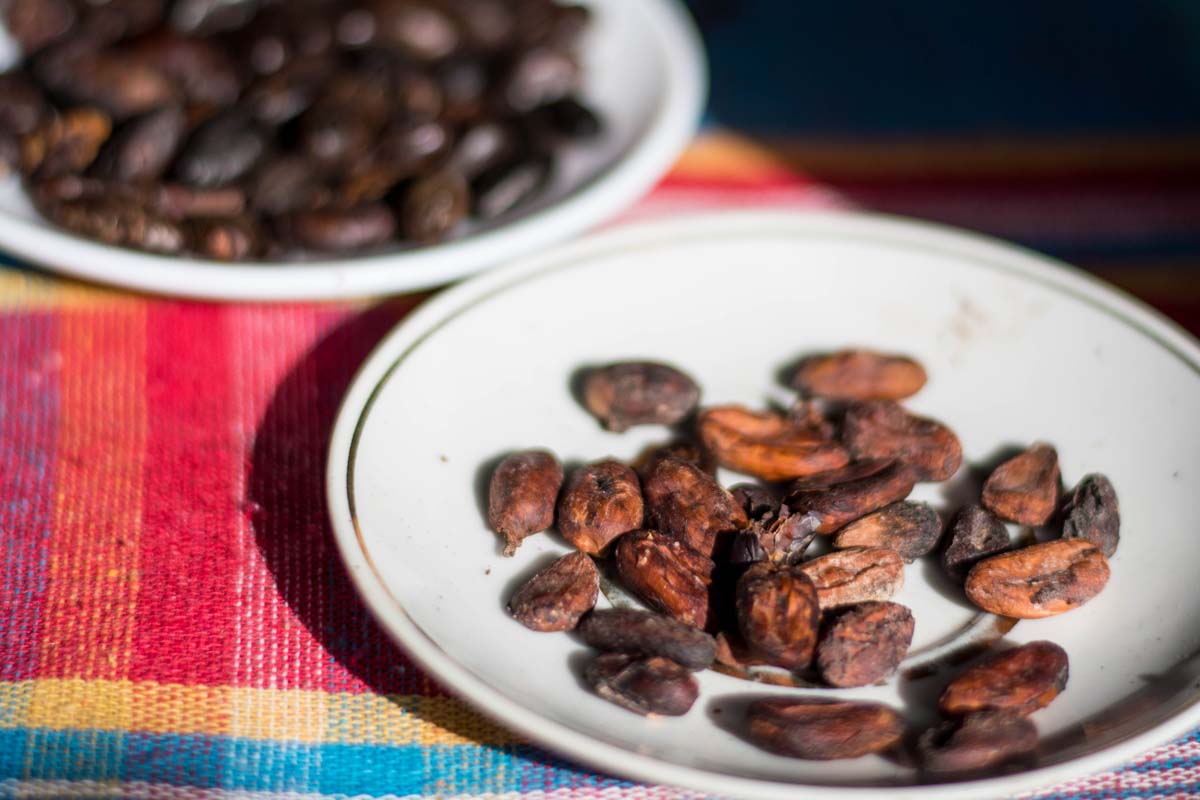 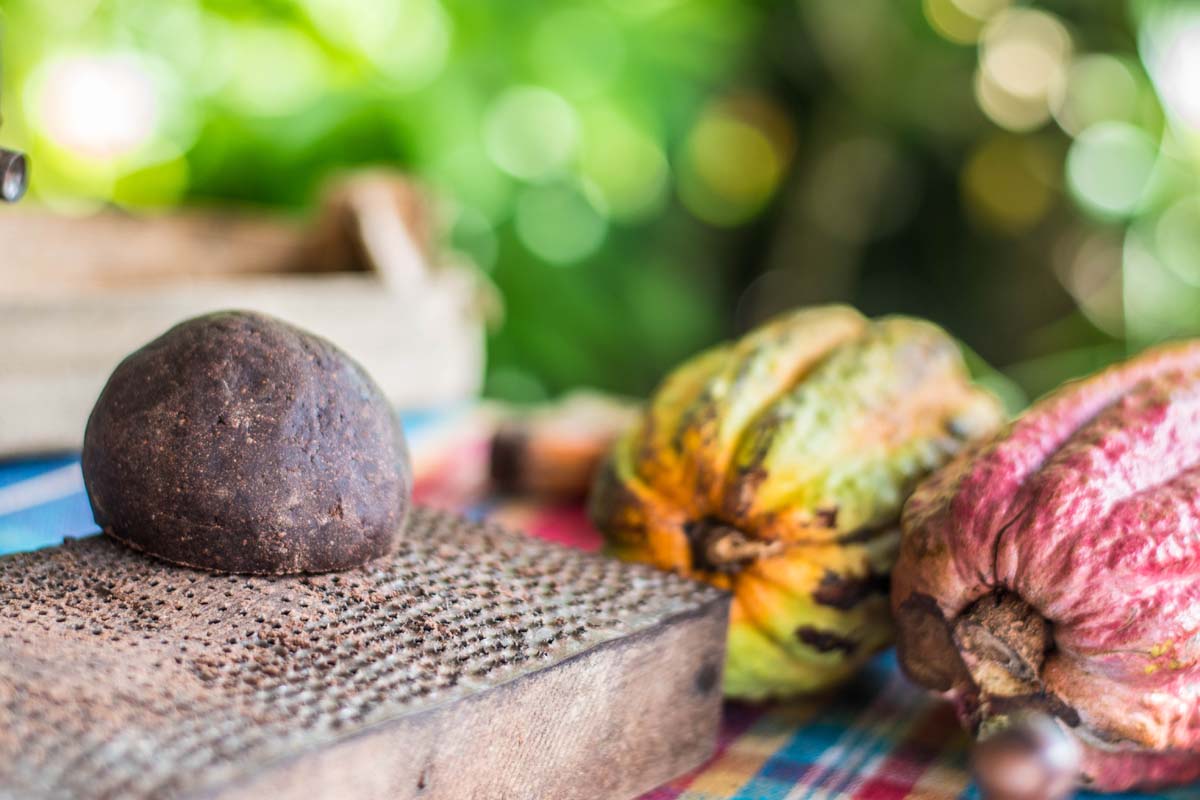 Of course the women sell all the products they produce, such as raw cacao balls, sweet chocolate bars and cute wooden containers with cacao butter. At prices between 1 and 3 CUC, these items weren’t too expensive, so we bought a few of them as souvenirs. We were happy to have bought them there right away, because afterwards we didn’t encounter them in any other part of Cuba. 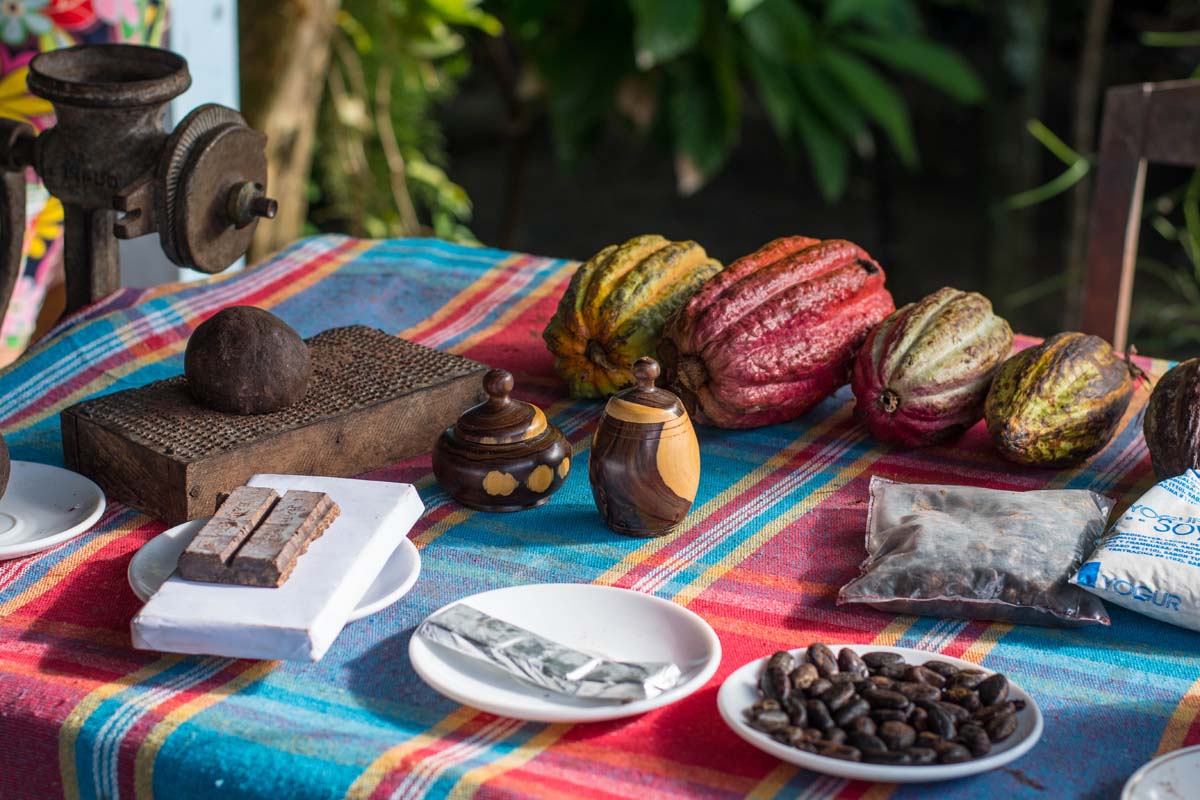 When we had a quick stop at Tato's restaurant on Playa Manglito to place our order for later, a bunch of kids were playing volleyball on the beach. Octavio told us these youngsters were having a course of physical education. Now that’s an upgrade from the musty gym of my former school! 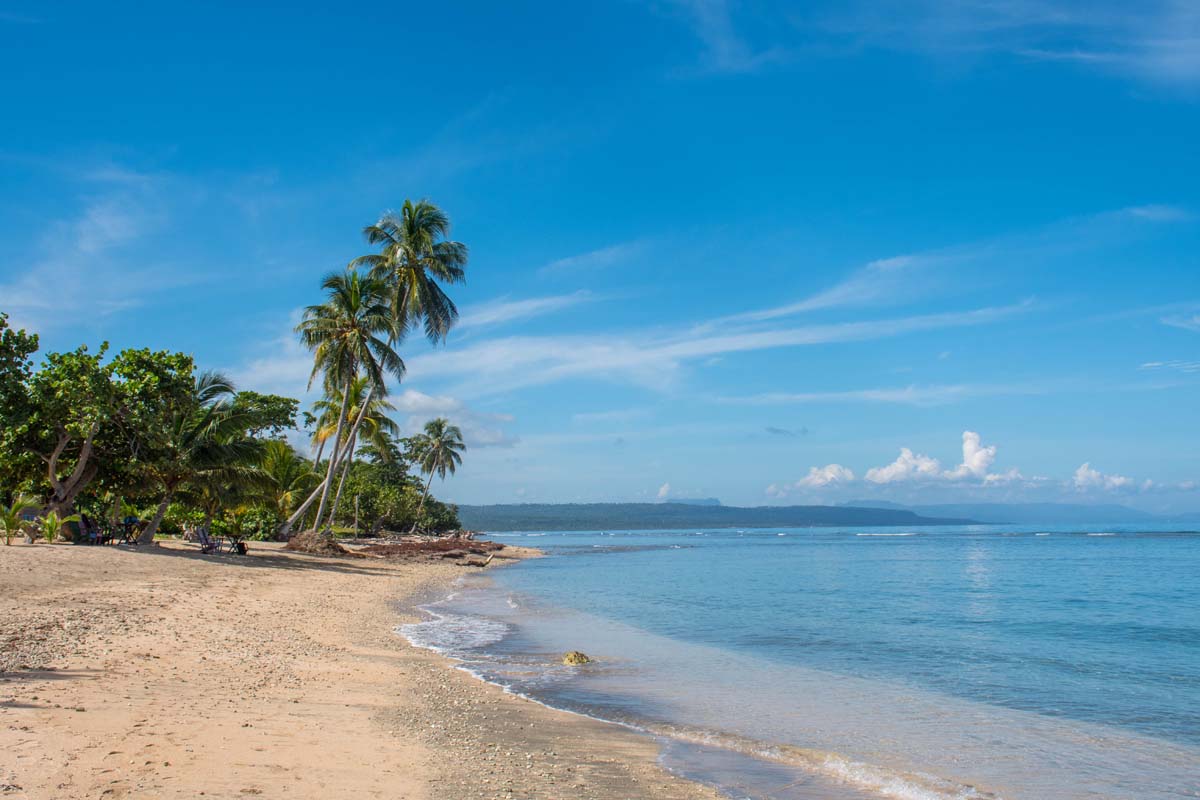 We rode on towards Paso de los Alemanes; a small natural tunnel in between the rocks. Octavio stopped so we could take some photos. When we were done, he told me to take place at the wheel. I don’t have a lot of driving experience, but this was an offer I couldn’t refuse. Super carefully and very slowly I drove on. Changing the gears and steering required much more effort than I’m used to. Luckily, I had Octavio next to me for assistance. 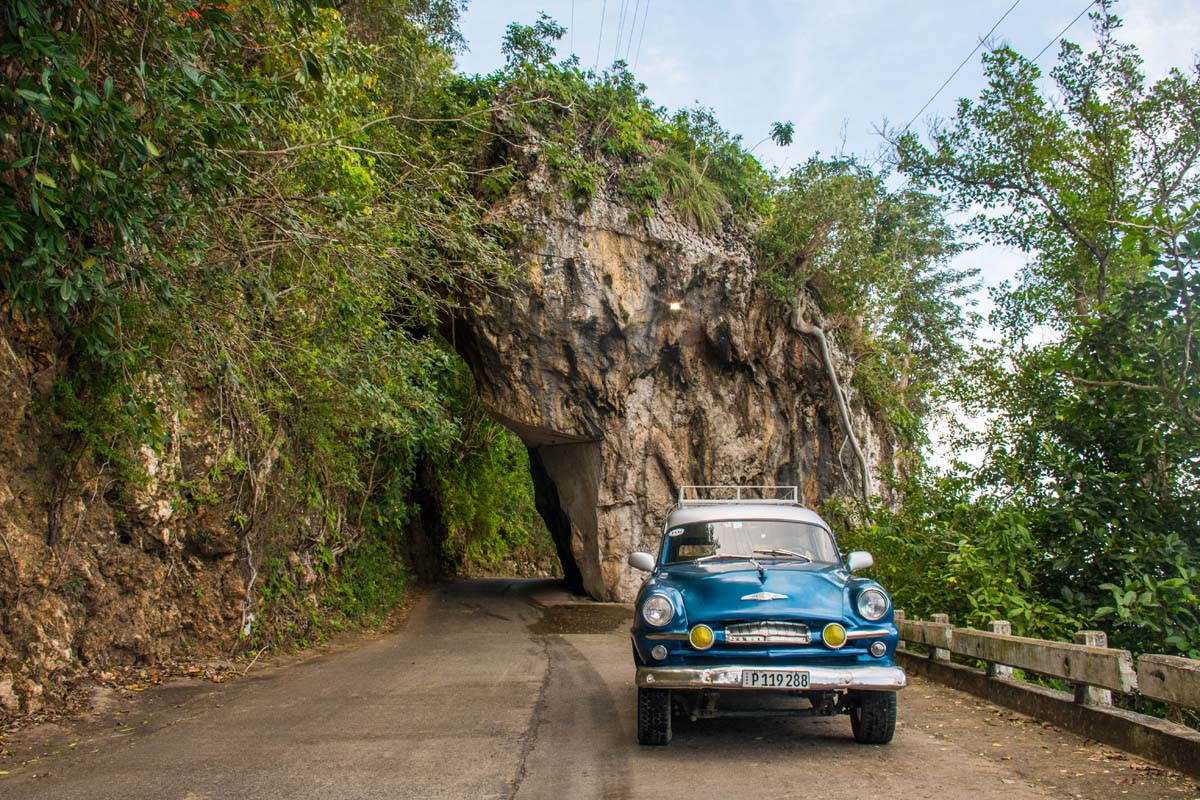 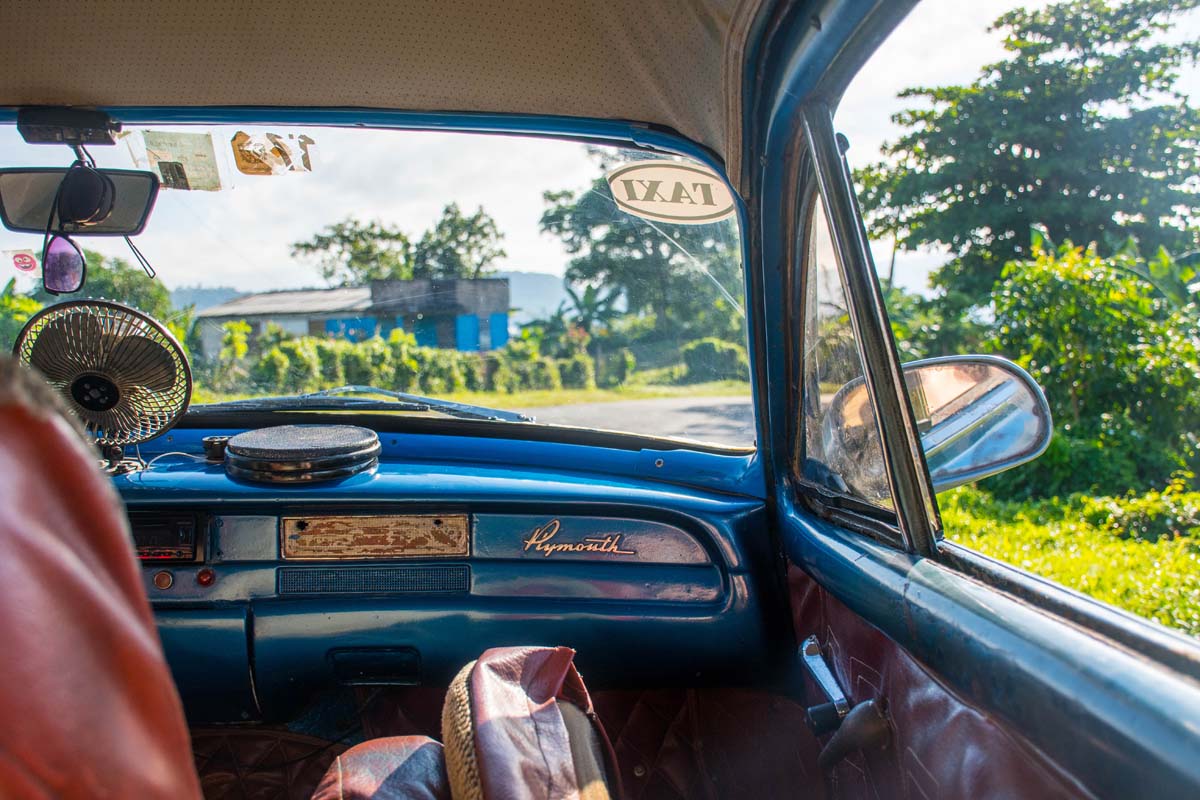 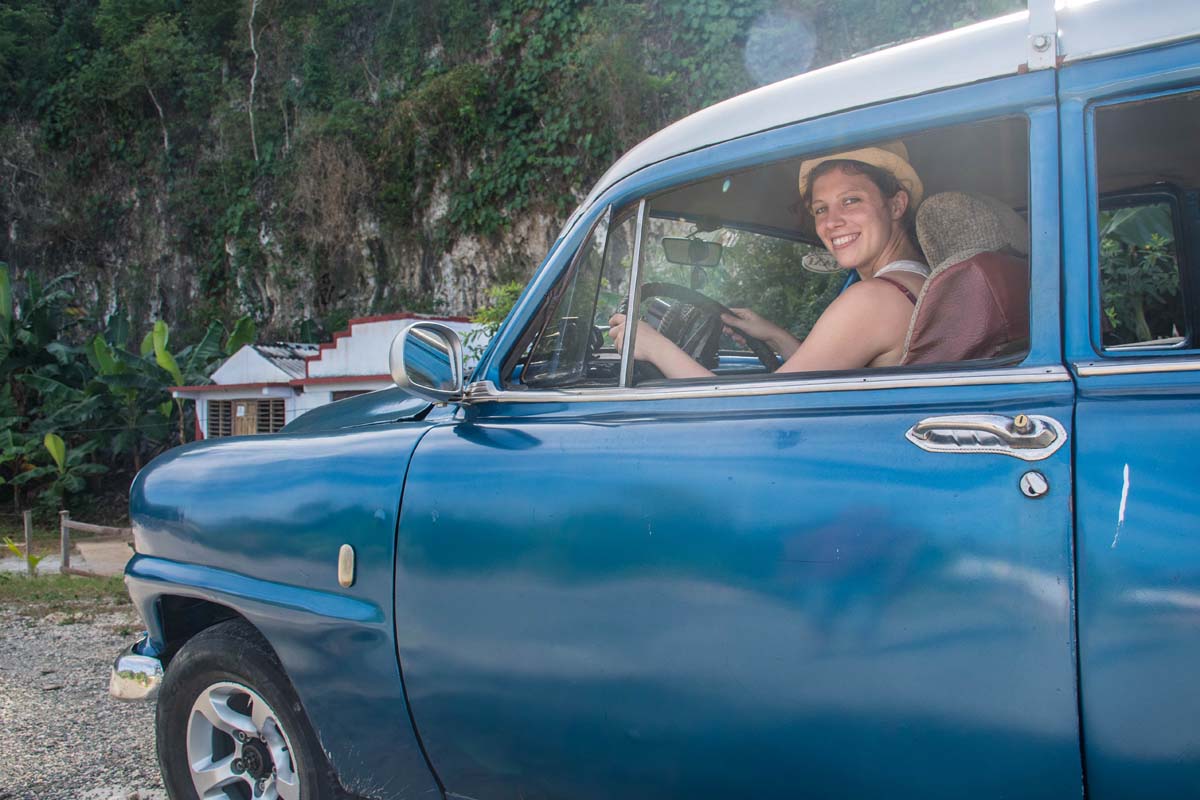 The Yumuri canyon and the snail tree

Sluggishly, I drove us to the Boca de Yumuri community. Here we stopped at El Mirador de Yumurí; a viewpoint over the wonderful Yumuri canyon. We didn’t have time to enter it, so we admired it from above and traversed the bridge spanning the canyon. 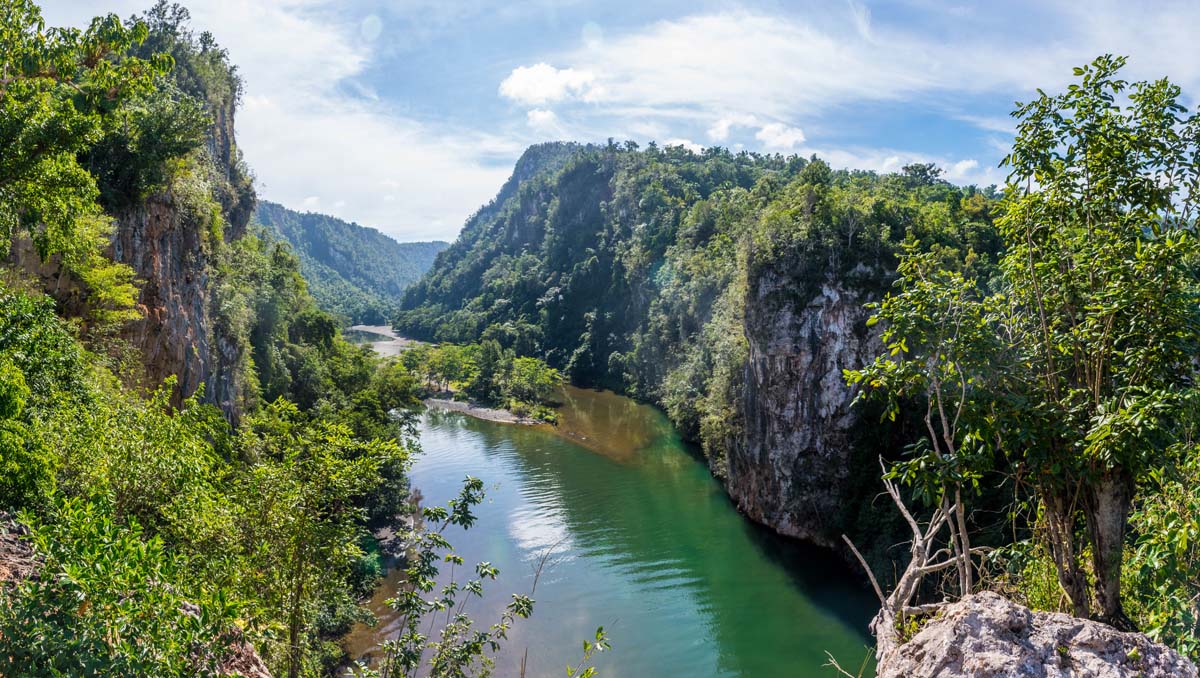 Roberto from Villa Paradiso details the various options for exploring the Yumuri canyon on his blog. If we had had more time, I would’ve loved to get closer and hike through the canyon towards the Belete waterfalls.

Facing the Mirador de Yumuri is the house of a Cuban family. The house itself isn’t that exceptional, but the big mango tree in their garden is. It is home to an enormous amount of polimitas. These snails, typical to the Yumuri area, live on trees and are characterized by their brightly colored shells. 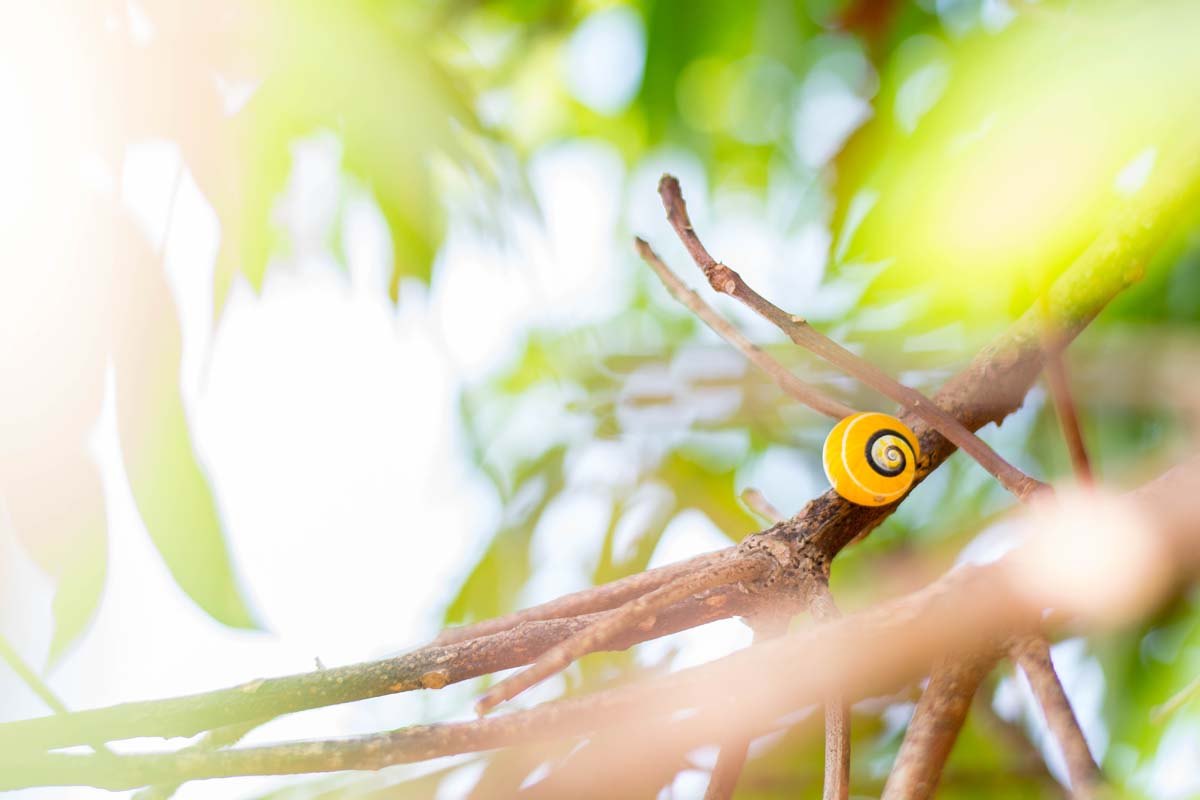 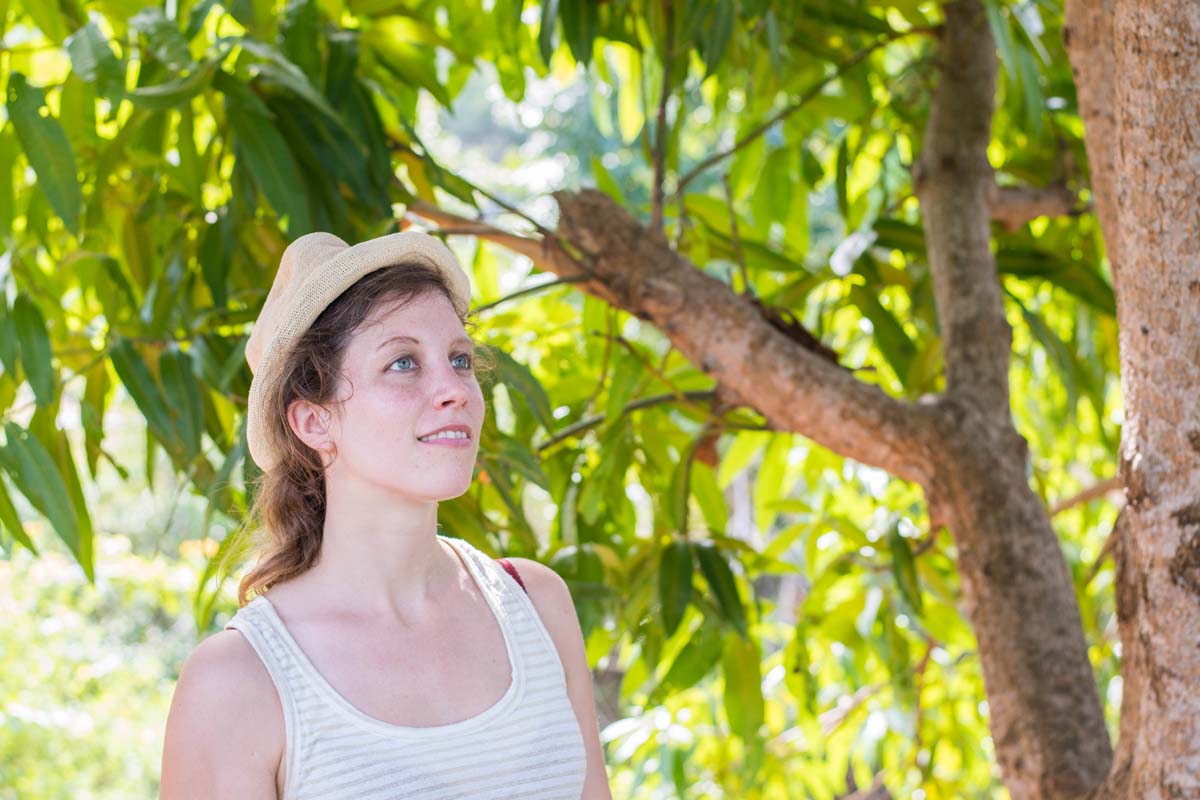 The last activity on today’s turbo excursion was lunch at the aforementioned Playa Manglito; another tropical beach that is somewhat similar to Playa Maguana. One thing that caught my attention here were the beautiful fossilized coral rocks that littered the beach. I hadn’t seen those at Playa Maguana. 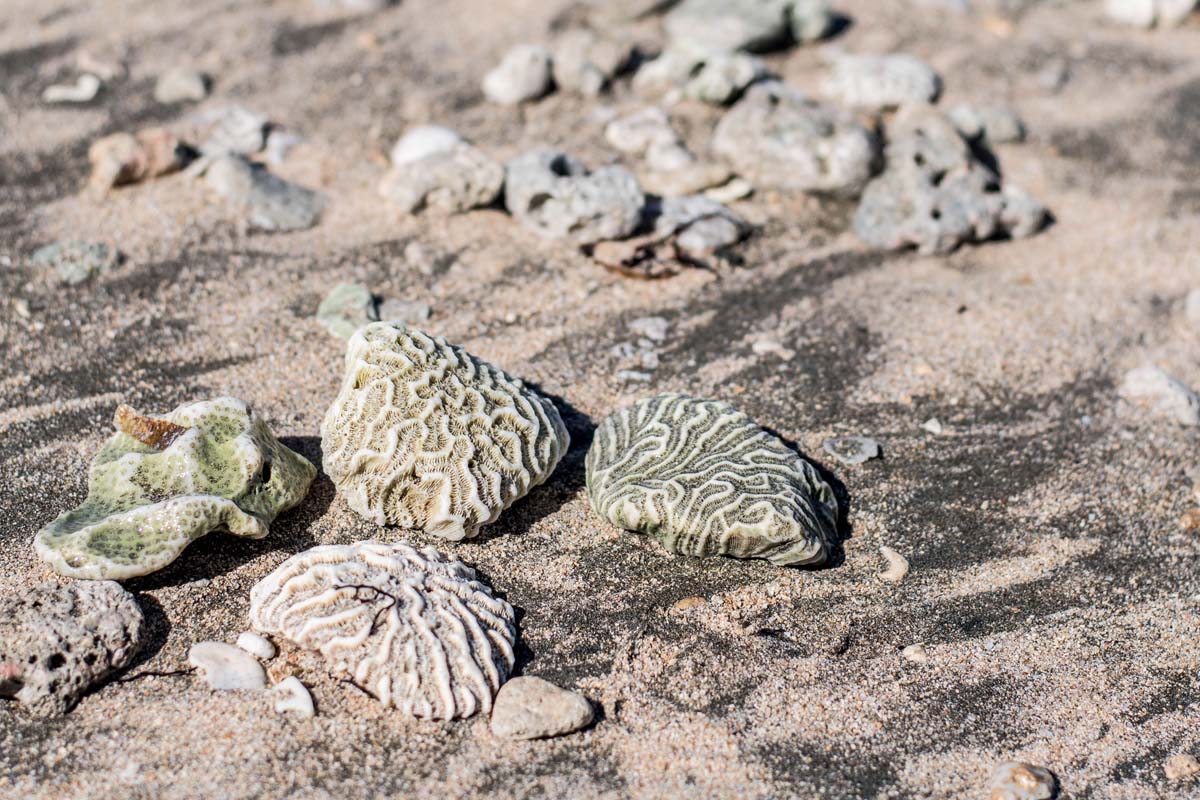 We were the first ones to arrive and had the entire beach to ourselves. They had put a table by the sea, so we sat down under the palm canopy and ordered a cocktail. Paradise at its purest. Not much later, our food was served too. We had asked for one plate of octopus to share, but we received so much food that we thought they had misunderstood our question. (They hadn’t.) 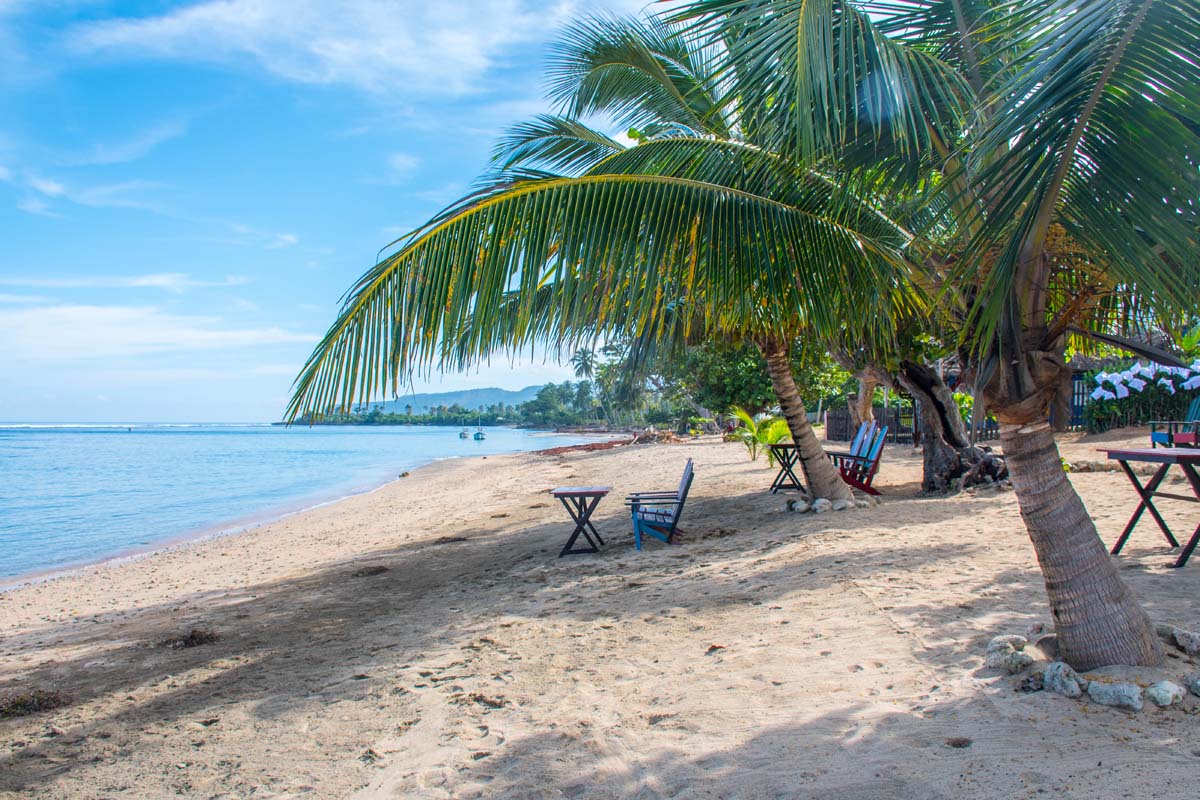 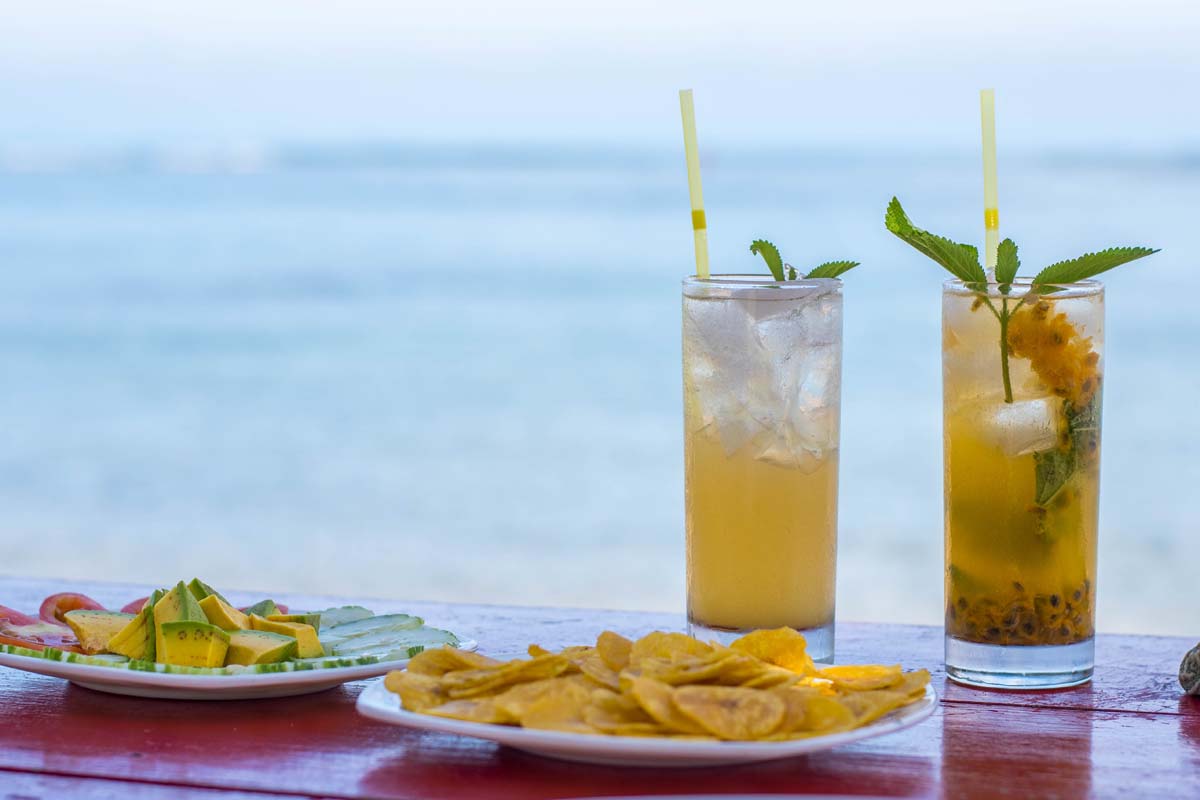 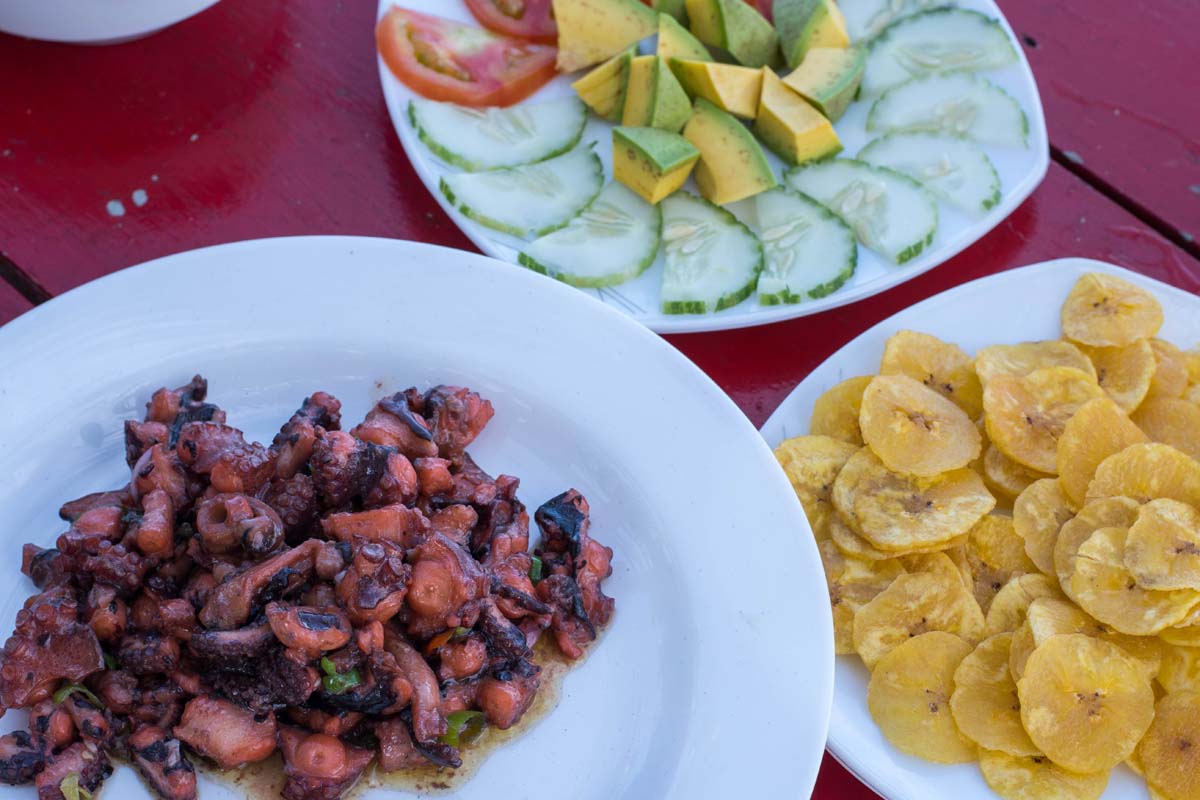 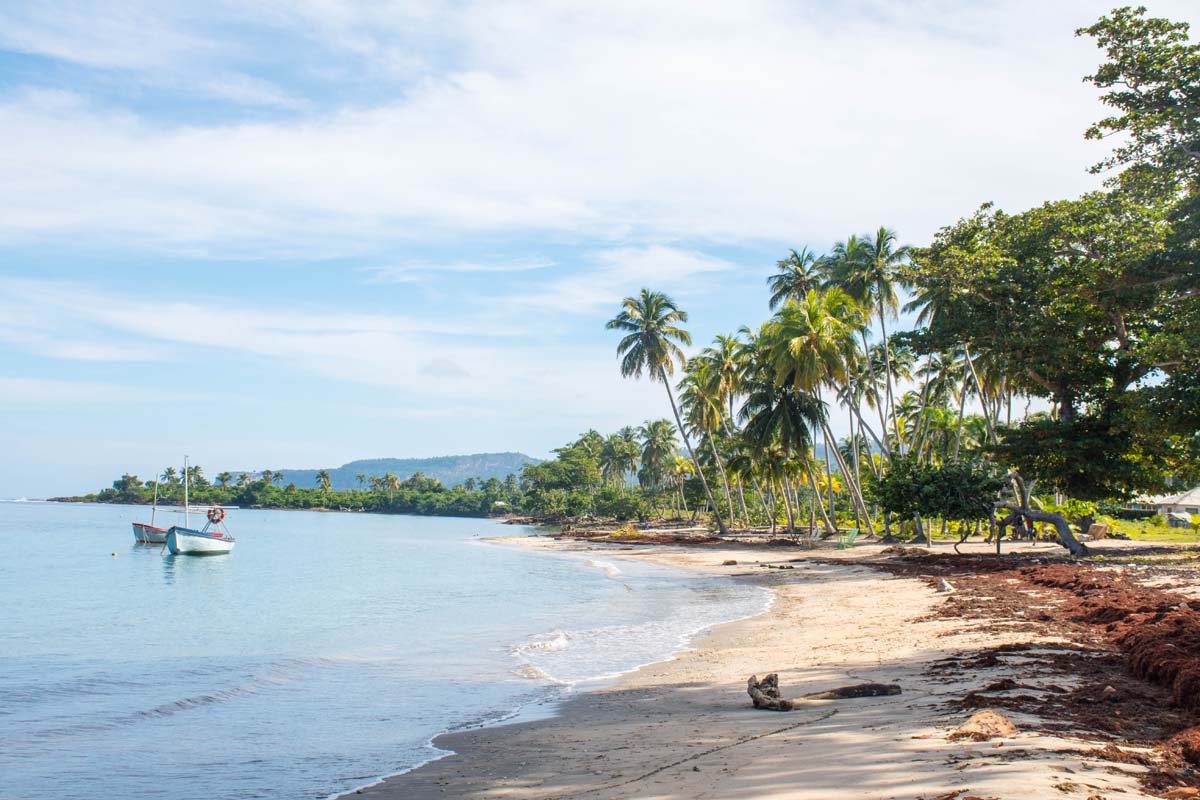 Around 12h30 it was time to leave the beach and return to the casa to pick up our stuff. We had booked a Viazul bus to Santiago de Cuba that left at 14h00. Sad to leave, we said goodbye to Roberto and Manuel and hopped one last time into Octavio’s taxi to go to the bus station. When we arrived there, we were told there was no bus. Was this a divine sign that we had to stay in Baracoa? The bus had broken down and no alternative whatsoever was provided. Cuba.

I asked for a refund in the Viazul office, but because I had bought my ticket on the internet, they couldn’t help me. I had to ask for a refund online. Pleading at the Viazul ticket office in Santiago de Cuba didn’t help either and on the website no refunds are offered. No-one even bothered to answer my emails. Thank you, Viazul.

From Baracoa to Santiago de Cuba

Obviously, a few taxi drivers saw a nice opportunity to make some quick cash. They offered rides to Santiago de Cuba at 35 CUC per person, more than double the price of the Viazul ticket!

Joining forces with fellow tourists, we eventually negotiated the price down to 20 CUC per person. In the end we (and eight other persons) took off in an old but sturdy ‘taxi colectivo’, but it seemed our driver and his friend still had some grocery shopping to do. Every five minutes we stopped somewhere to buy plastic bags, or mandarins, or bananas… We weren’t really making a lot of progress…

During the fifth stop or so, we remembered that Roberto had recommended trying the cucurucho, a local delicacy, and we saw an old lady selling it. We bought two pieces for 20 CUP and tried them later in Santiago de Cuba. It’s a mix of coconut, sugar and other ingredients such as orange, guava and pineapple wrapped in a cone-shaped palm leaf. And it’s delicious! We regretted not having bought more when we had the chance. As with the cacao, it turns out impossible to find in the rest of the country. 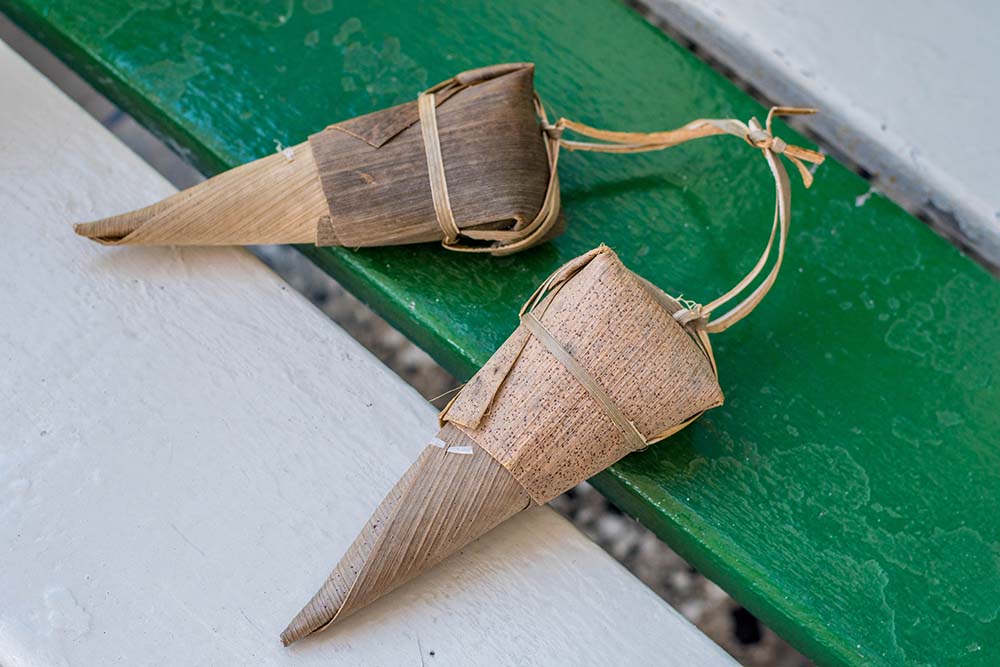 The ride was long, bumpy, hot and uncomfortable. To top things off, our car almost broke down when a large chunk of metal was suddenly dragging over the road. Luckily, it turned out to be the bull-bar that had come loose. Our driver brought out a rope and tied everything together. Problem solved.

After five horrible hours, we made it to Santiago de Cuba. When my map indicated that we were about 1km from our casa, we got out off the car. Although a taxi colectivo is supposed to drop off its passengers at their exact destination, our driver refused to do so. Read the article One day in Santiago de Cuba for the next episode in our one-month journey through Cuba. 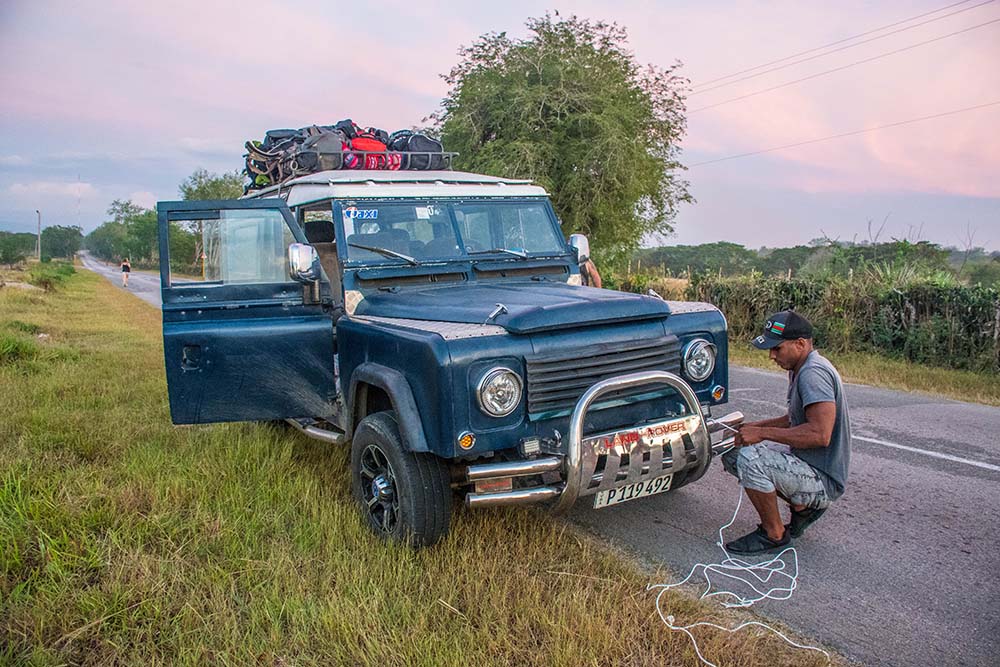 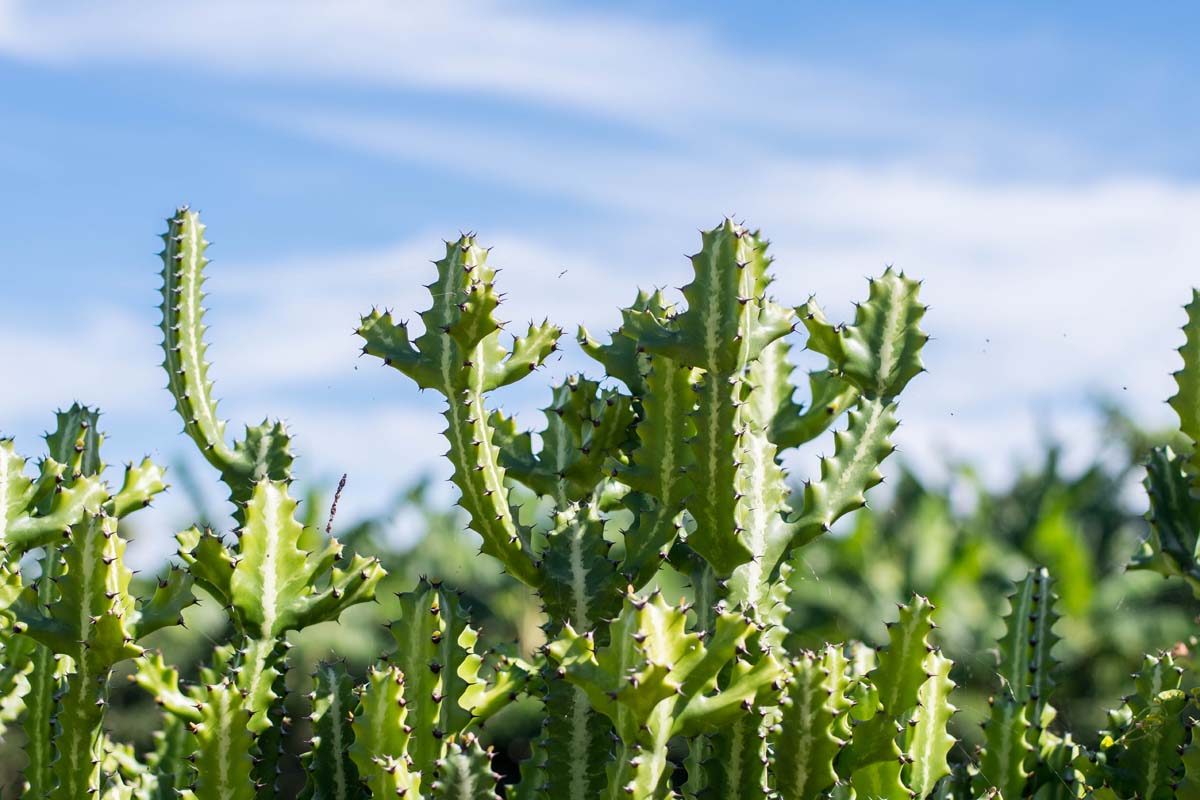 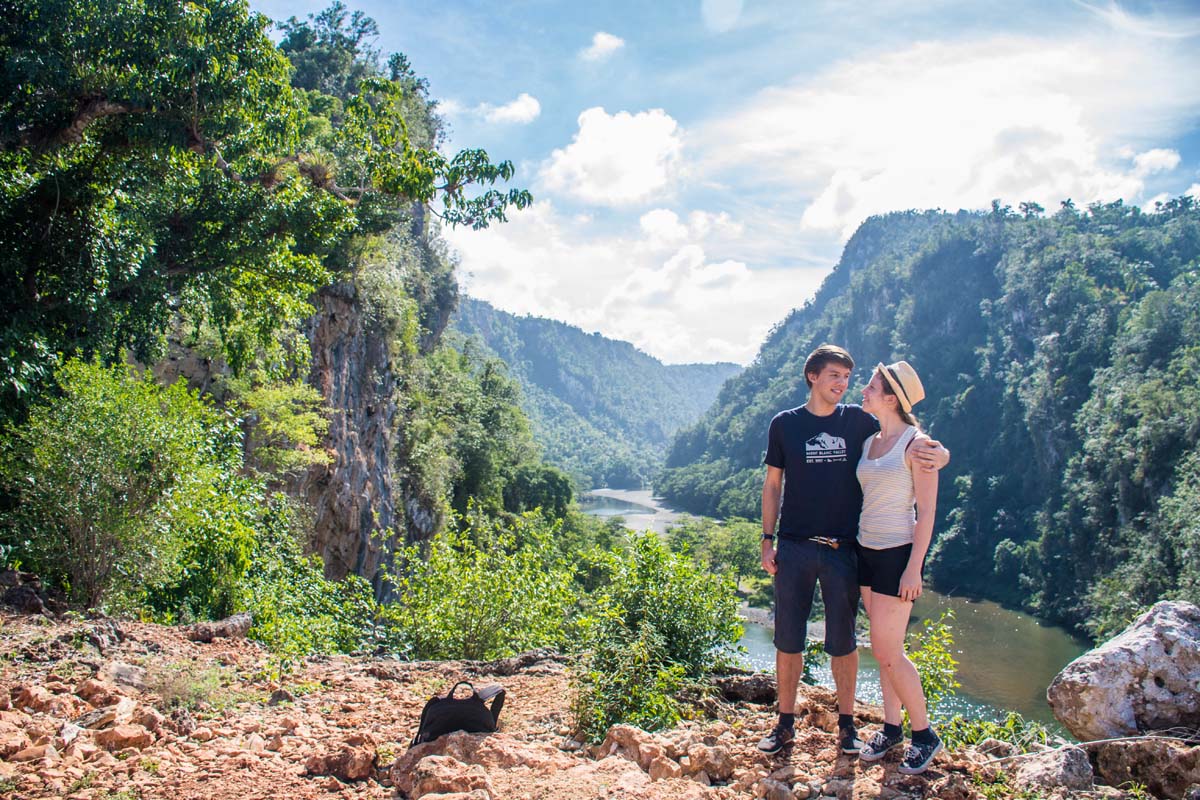 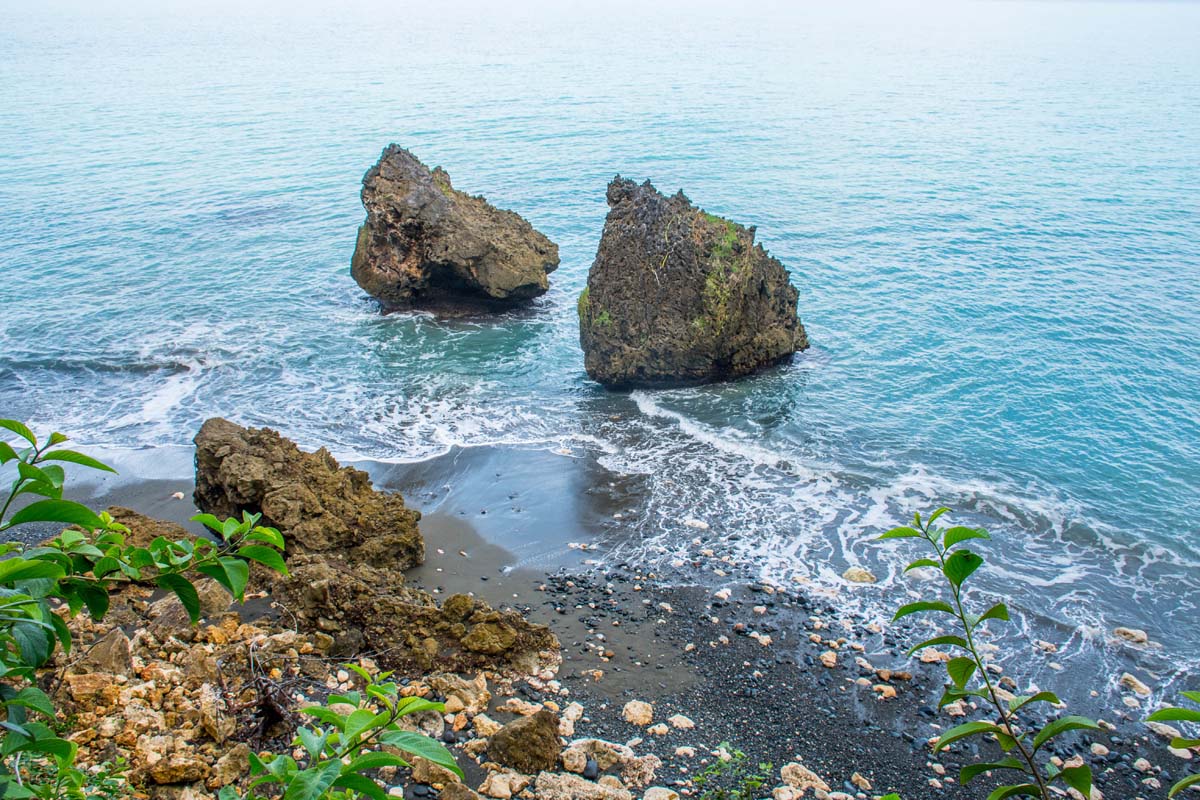 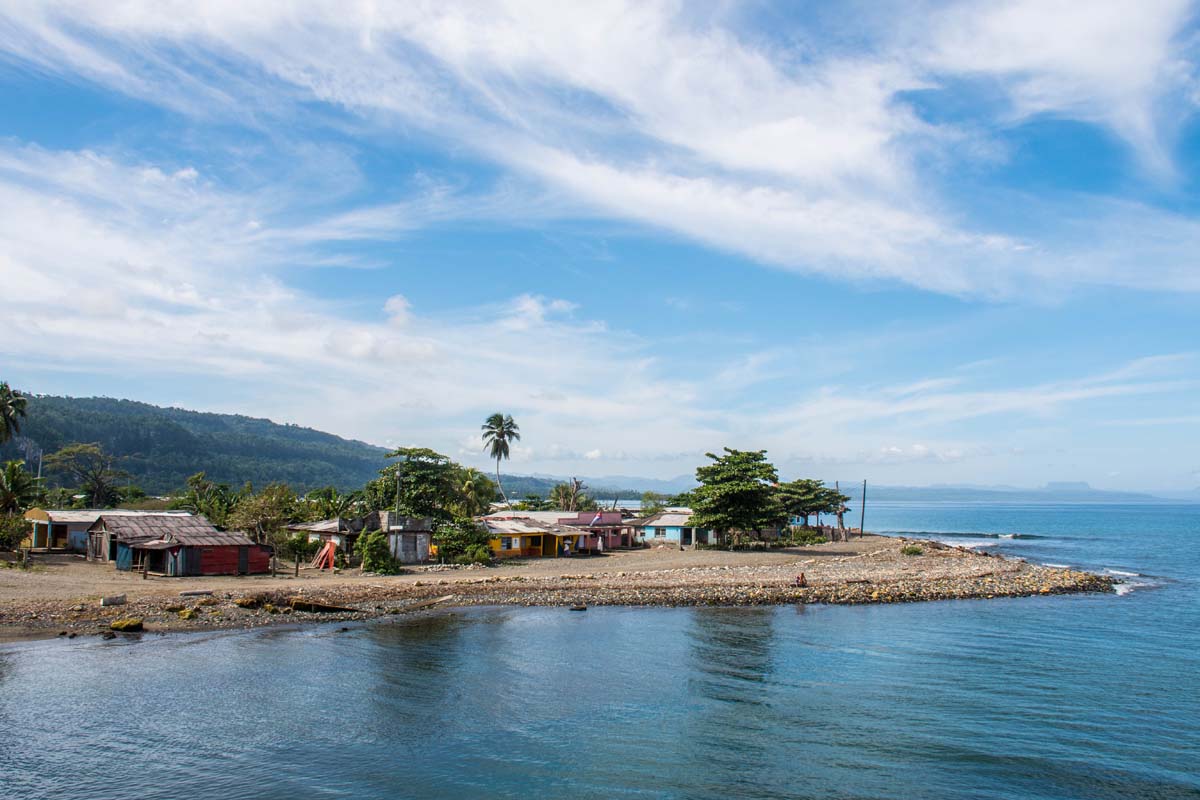