Upon arrival in Santiago de Cuba in the evening, we had trouble finding our guesthouse. The name didn’t show on the façade, which made things a bit more complicated. Suddenly, we realized that the big TripAdvisor sticker on a wall could be a clue. And indeed, our guesthouse turned out to be a building we had already walked past two times.

Having been cordially welcomed by our hosts Miriam and Fernando, we took a shower and felt ready for a new episode in our journey through Cuba. It was 8 PM already, time for dinner. Following Miriam’s advice, we tried a pizzeria nearby and ate a giant pizza for about 4 CUC. It was too large to finish at once, meaning we had pizza for breakfast the day after.

Tired from the previous intensive days and the long travel, we decided to return to our guesthouse and call it a night. For the first time on this trip, we had time to watch a series, although I had to fight against my sleep to keep my eyes open until the end. 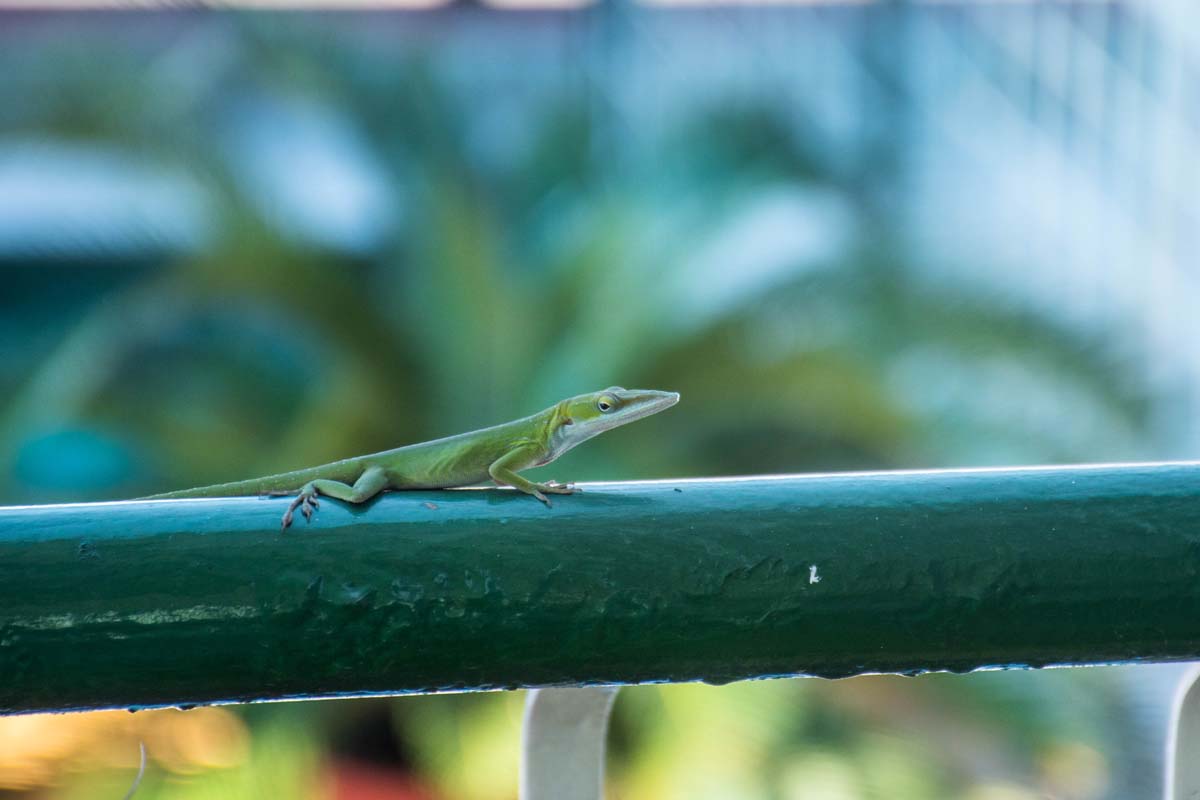 The next day was one of those rare mornings where we had switched off our alarms and woke up when we felt like it, which ironically turned out to be as early as 8 AM. We climbed to the rooftop of the casa to enjoy our pizza leftovers breakfast. The setting matched today’s laidback mood: seated in one of the many rocking chair or swings, one could spend hours gazing at the large variety of plants placed on the roof terrace or stare at the towers of the Catedral Nuestra Señora de la Asunción.

Under the guise of ‘exploring the city’, we started combing the streets in search of more cucurucho. We had to suspend our mission as we realized the treat could only be found in Baracoa. Nevertheless, our search had led us close to Cuartel Moncada, or the Moncada Barracks, named after the General Guillermón Moncada, a hero of the Cuban War of Independence. On 26 July 1953, this military barracks was attacked by a small group of revolutionaries led by Fidel Castro. Since the event marked the official beginning of the Cuban Revolution, Castro used the date as the name for his revolutionary movement. 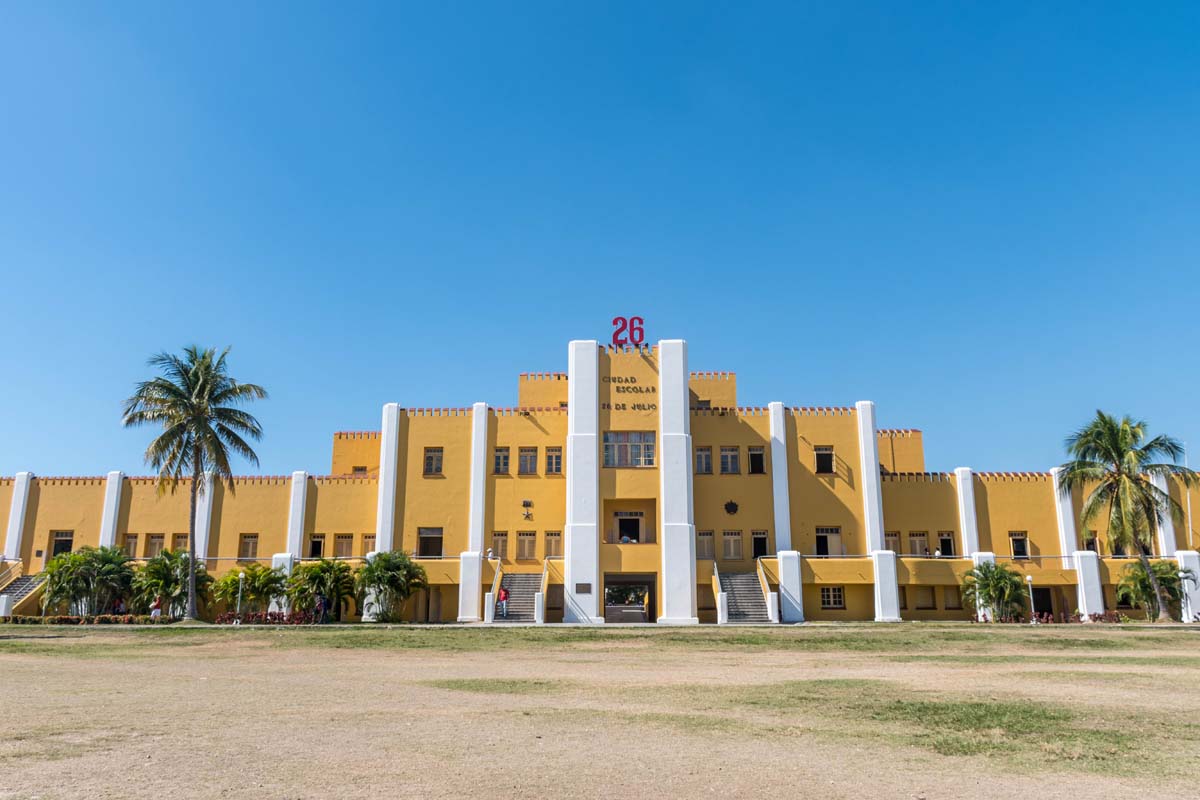 Today, the right wing of the fortress has been converted into a school, whereas the left wing houses the July 26 Historical Museum. Its façade is still pierced with bullet holes from the 1953 attack.

Everywhere in Santiago de Cuba, people were lining up in front of the supermarkets. We needed snacks for our trekking in Sierra Maestra, so we had no other option but to join the queueing fun. Whenever four people came out, four others were allowed in. Strangely enough, we found the shop to be nearly empty when we finally entered. Because they don’t have modern anti-theft equipment, the shop supervisor has to keep an eye on all the clients - preferably not more than four at a time. It’s a ridiculous system. Cuban people are not inclined to stealing and this system makes everyone lose a lot of time.

Calle de las Enramadas, the place to be

So far we weren’t really enjoying Santiago de Cuba. The city was too busy, too hot and there were too many cars emitting stinky exhaust fumes. Maybe we weren’t exploring the right side of the city. We returned to Calle de las Enramadas in the city center which seemed to be more peaceful. 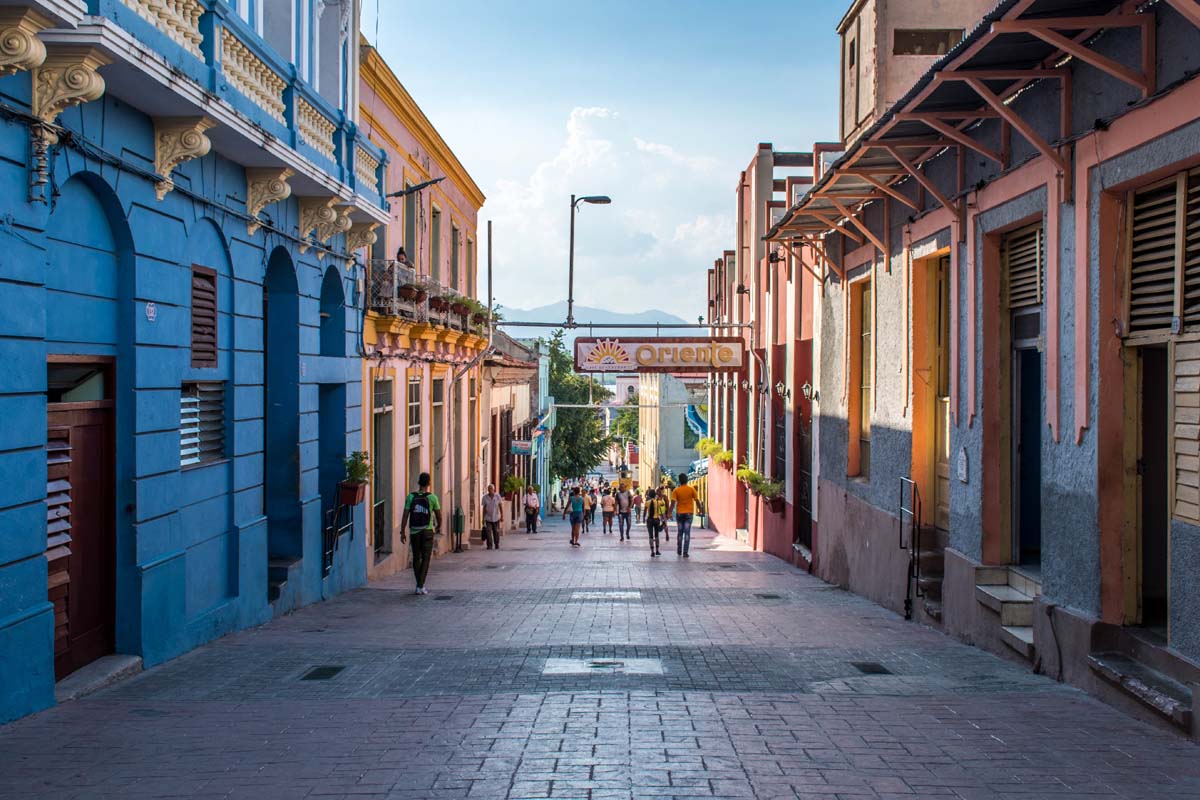 Once known as Camino de la Playa, a small passage that led to the beach, Calle de las Enramadas has become the most symbolical street of Santiago de Cuba. It has been denominated with various names reflective of different periods in history. During Spanish colonialism, it was referred to as Calle del Espartero, because convicts and fugitive slaves were scandalized on the pillory that once stood on a corner of this street. When the tram made its introduction, the street began to really develop culturally and it became home to several important theaters, institutions and banks. Today, its official name is Calle José Antonio Saco, after an important Cuban publicist, but in popular speech it is still referred to as Calle Enramadas. Intersecting the city all the way from Plaza de Marte to the waterfront, this pedestrian street turned out to be the most interesting walk in town. 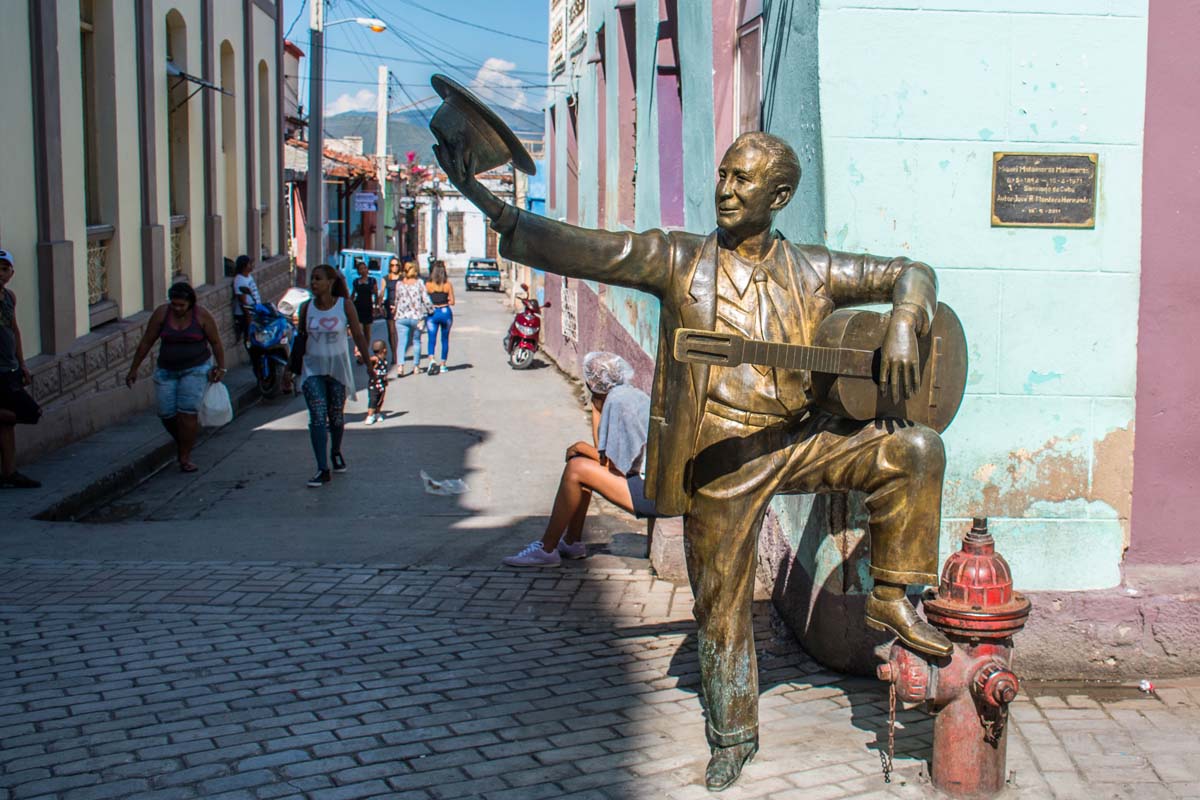 We slowed down as we started to appreciate Santiago de Cuba. Bart bought a cone of ice-cream, which was ridiculously cheap at 1 CUP (the equivalent of 0,04 EUR). Actually, all the street food was super cheap here. The pizza didn’t cost more than a few CUP either.

We were drawn into a side street of Calle Enramadas, where a street market was taking place, with mainly snacks and souvenirs on display.

Our next stop was Parque Céspedes, which is basically the heart of the city. The square is surrounded by important buildings such as the Catedral Nuestra Señora de la Asunción, the townhouse, the oldest house of Santiago de Cuba, the bank and Casa Grande. Both the cathedral and Casa Grande offer beautiful panoramic views over the city for a few CUC, but the latter throws in a free cocktail too. Not much later we were standing on the rooftop of Casa Grande marveling at the view with a refreshing mojito in our hands. Our timing was perfect. Some sort of meeting had just finished and all the participants gathered on the rooftop for a multi-course menu. We didn’t receive any food, but we did enjoy the music from the live band that had been invited for the occasion. We even ordered another mojito to stay a bit longer. 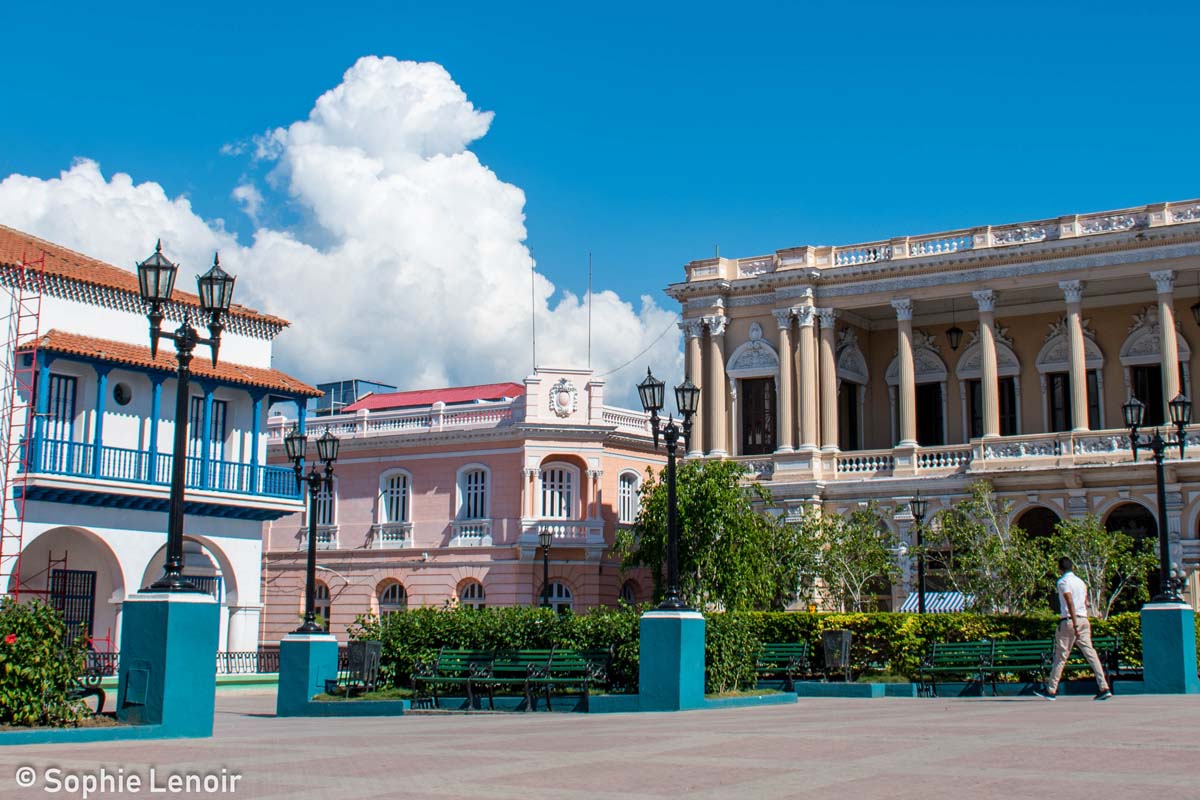 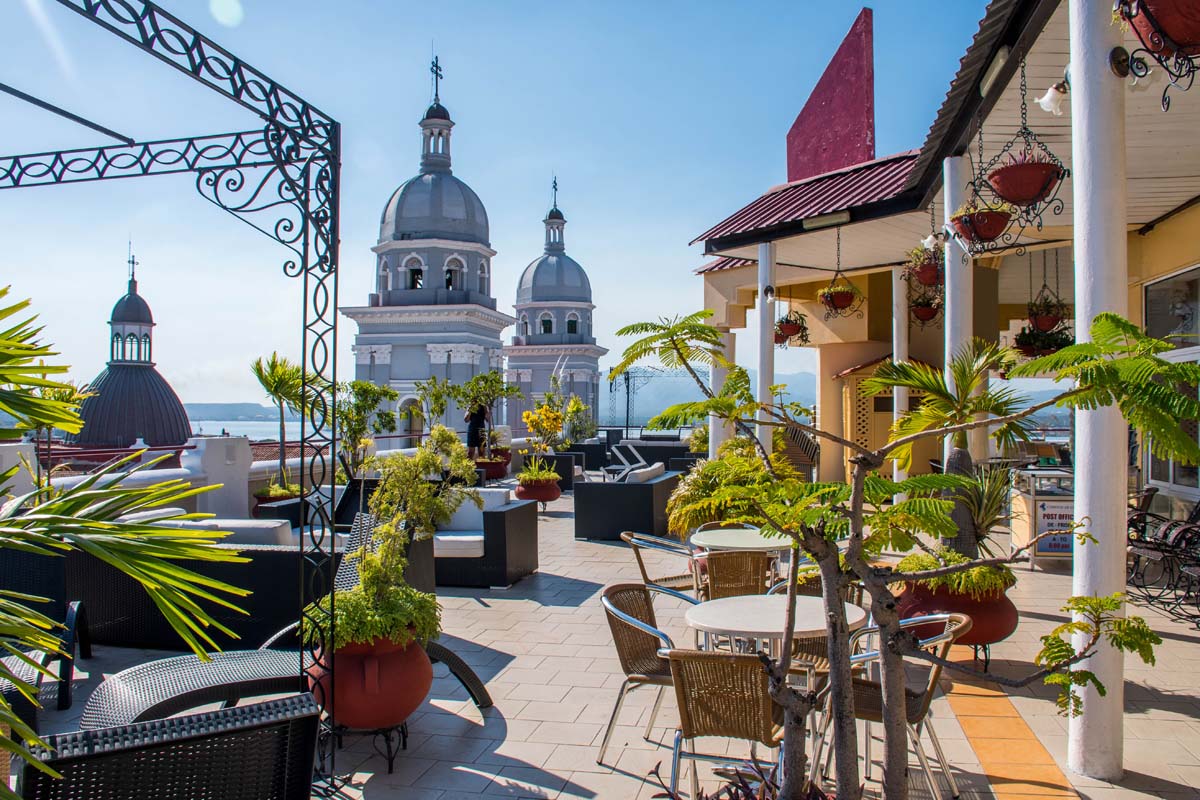 Back on Calle de las Enramadas, we explored the shops that lined the street. Some stalls with fresh fruit and juices, a courtyard with arts and crafts, a hall with souvenirs… You could tell this area was focused on tourism, but where were the tourists?

Jardin de las Enramadas, on the other hand, was a little park where many Cubans converged. We entered and found out there was a large ice-cream shop in the middle of the park. Following the example set by the locals, we picked a table and ordered. While waiting, we watched how the waiters kept on serving huge bowls containing at least five or six scoops of ice and complementary biscuits. Although it was ridiculously cheap, we limited ourselves to two scoops each and a biscuit, which amounted to a total bill of 5,20 CUP (around 0,20 EUR). 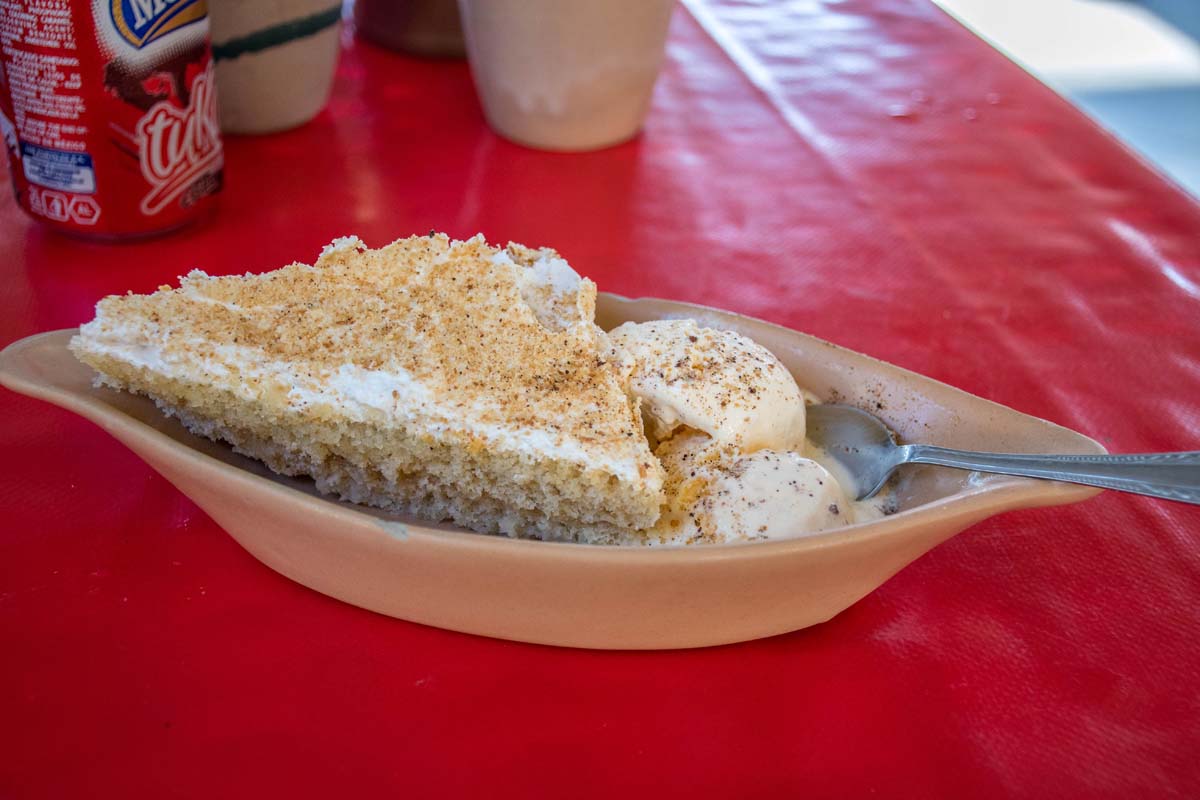 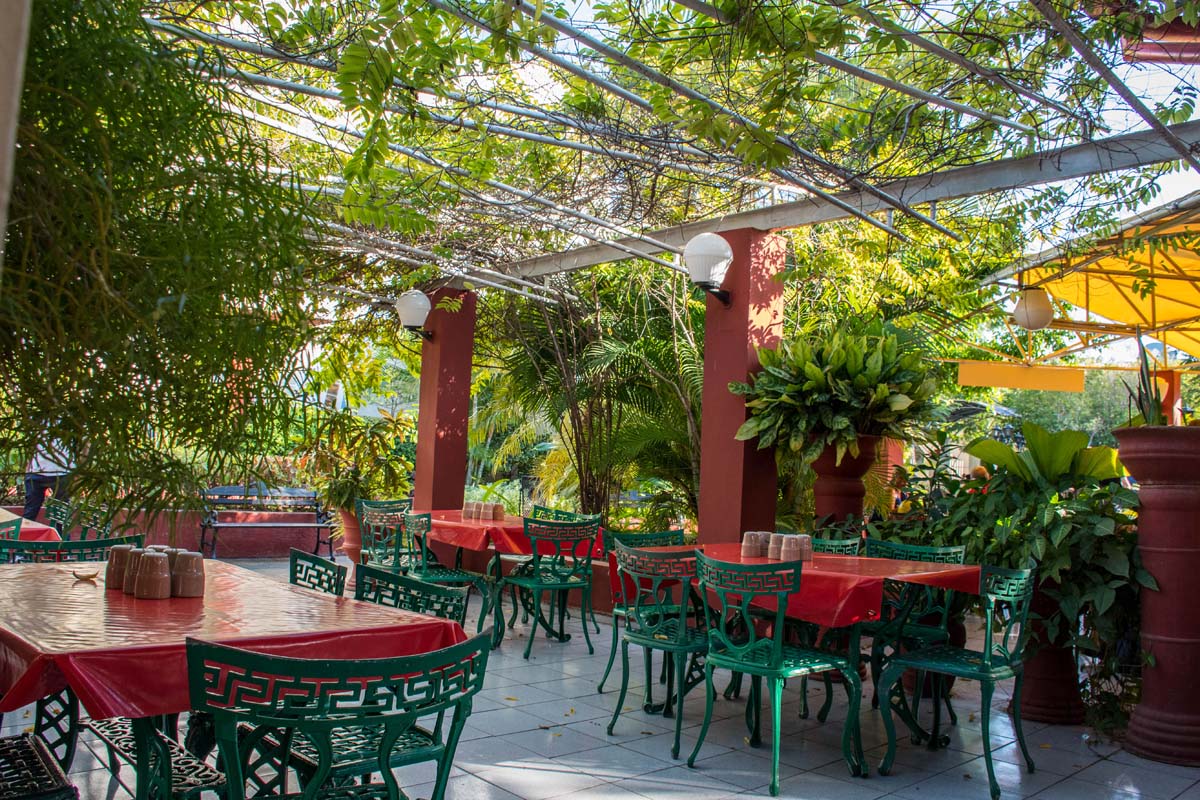 Note of warning: Be careful when doing transactions in Cuba! It takes time to get used to the two different currencies, and some Cubans will take advantage of that confusion. When we asked for the bill, the waitress said it was ‘cinco y veinte’ (5,20 CUP). Slightly confused by the ridiculously low price, I thought she meant ‘veinte y cinco’ (25 CUP). The waitress pointed to the 25 CUP I was holding, so I gave it to her and she disappeared. Moments later, I realized what had happened and I called the lady back. She confirmed she had made 'a mistake' and gave me back my change. It’s not a lot of money (she took 1 EUR instead of 0,20 EUR), but I hated being tricked.

It was almost 5:30 PM. If we wanted to see the Santa Ifigenia Cemetery before sunset, we had to hurry. We walked as fast as we could and arrived a mere thirty minutes later, but we were denied access because the 'Changing of the Guards' was already going on. Thanks to my well-trained puppy eyes, the guard allowed us to walk in, but not further than 50 meters. Check! That was enough, at least we could see the soldiers marching and taking down the Cuban flag. The sun was setting behind the cemetery, which gave the ceremony that extra touch. We were happy to have witnessed this moment, and although we hadn’t been allowed entrance to the cemetery, we have seen Fidel’s grave and Marti’s monument from a distance. 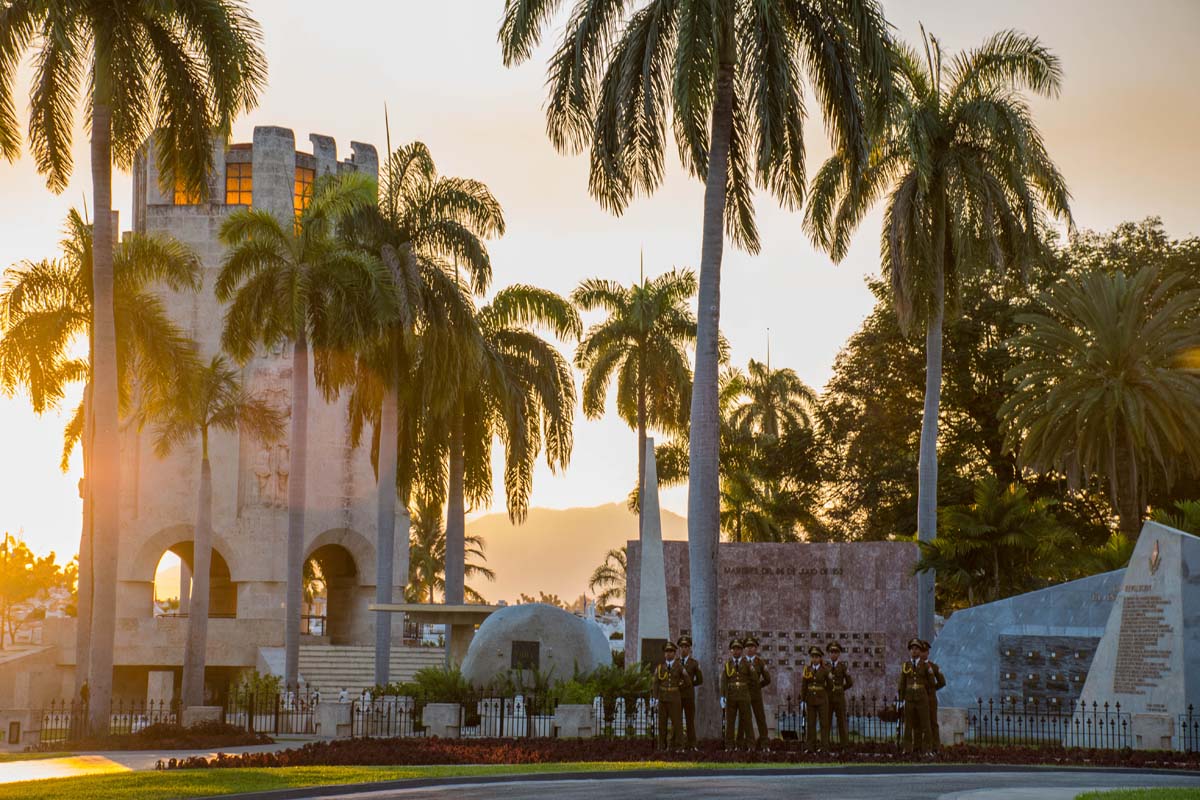 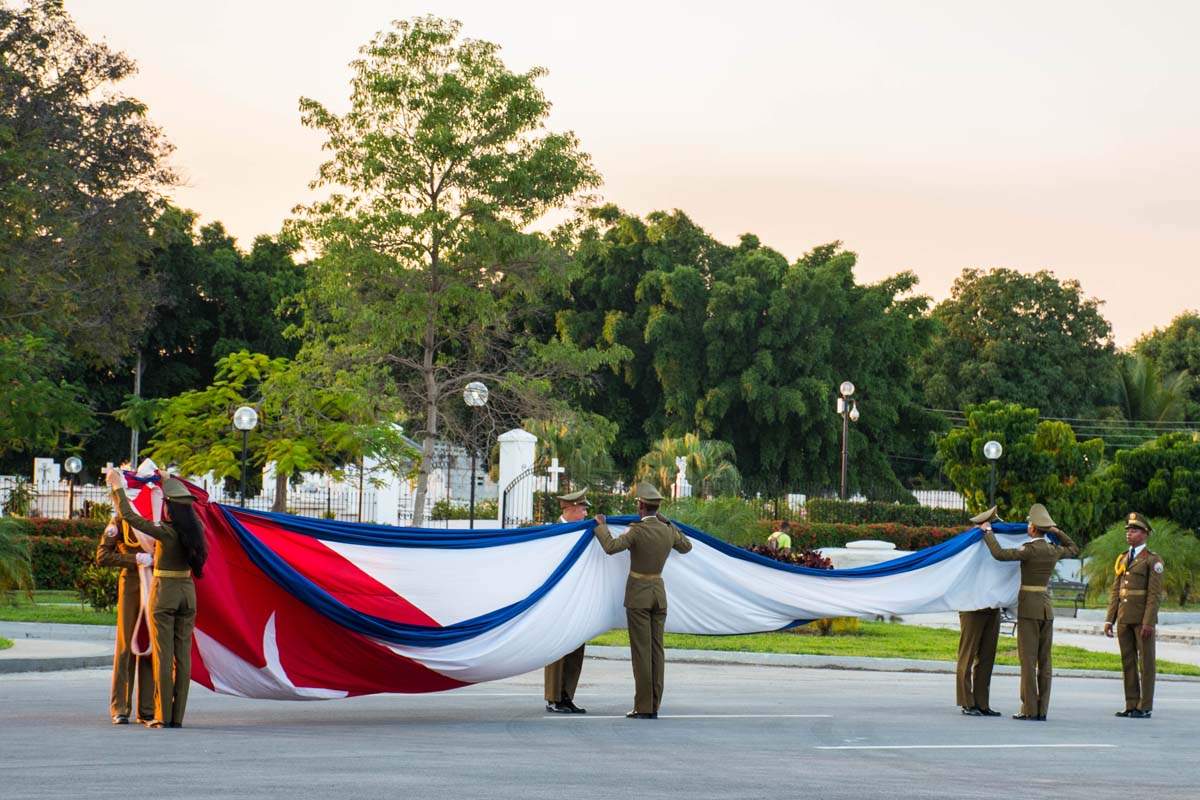 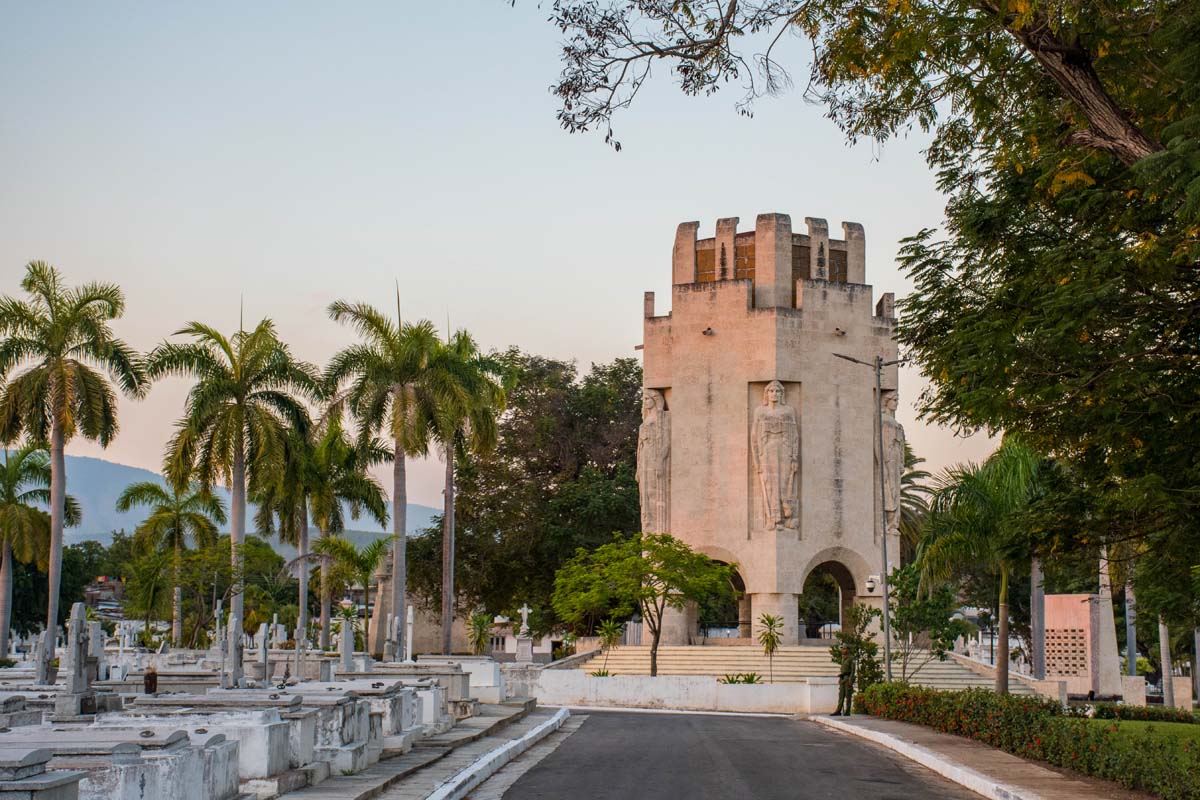 After nightfall, we checked out Parque Alameda in the center of the malecón (boardwalk). As opposed to Havana’s malecón where you suffocate from the exhaust fumes, the malecón of Santiago de Cuba is actually a nice place for a romantic evening stroll. We however arrived too late and saw only the upper tip of the sun disappear into the sea. Obviously a popular place for locals to hang out, the park features a playground, palm trees, street vendors and public Wi-Fi. 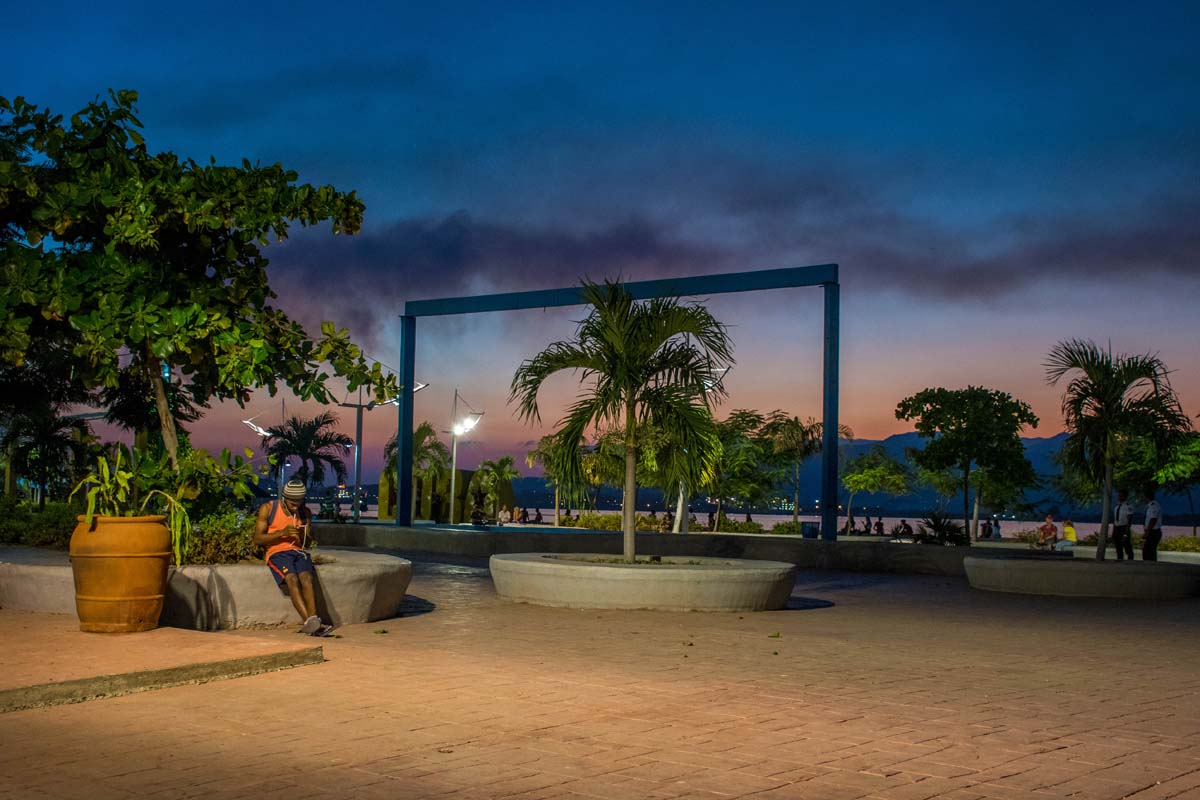 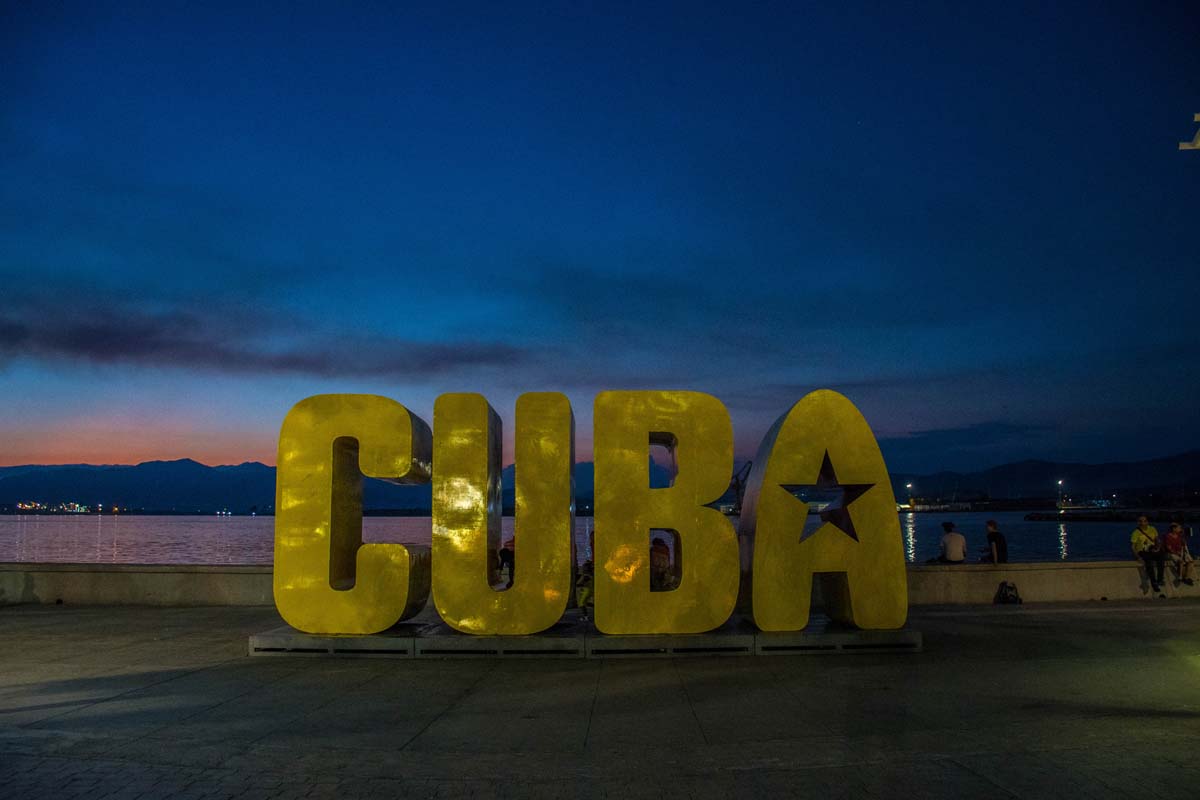 On our way back we spotted a shop that was still open. As mission ‘finds snack for Pico Turquino’ hadn’t been very successful until then, so we wanted to try our luck there. A cleaning lady was mopping the floor and got angry with us when we walked through the aisle. I mean, how else are we supposed to get our stuff? I absolutely love Cuban people, but when they’re at work, they can be quite annoying…

Not much further we passed by a bakery and -surprise surprise- another massive queueing line. Were these still the consequences of the bread shortage? I don’t think I’ve mentioned it in my earlier articles, but since we were in Baracoa, it was almost impossible to buy bread because the national flour mill had broken down... 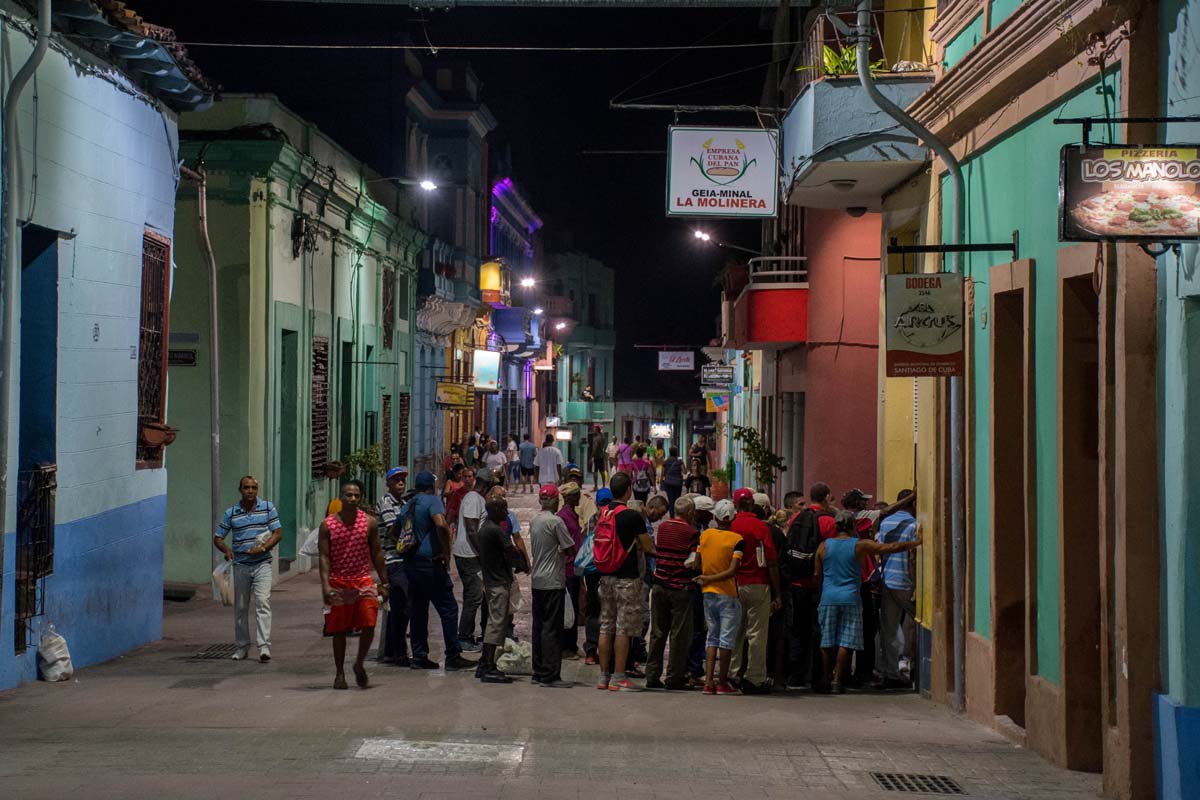 For dinner, we went to Bendito Farandela, situated next to the pizzeria from the night before. In comparison, the menu is a bit more varied but the prices are slightly more expensive. A big plus though, is that you can enjoy your meal on their rooftop.

Knowing we’d have to wake up at 4 AM, we tried to make it an early night. Even though we should’ve known by now, that plan failed when we started talking to our host Miriam. The hours flew by. Although I hated my talkative self when I woke up the day after, those moments are the best thing about casas particulares.

We stayed in Casa Miriam, a beautiful house located in the heart of Santiago de Cuba. The place is run by Miriam and her husband Fernando, kind and caring hosts who welcome you into their home like family. They go above and beyond to ensure that you are comfortable and content. Whereas the rooms are clean and large, equipped with a/c and refrigerators, my favorite spot was the roof terrace. The casa has a beautiful deck with rocking chairs, many plants, and a splendid vista of the city.

The address is: Heredia #412 between Reloj and Clarin, Santiago de Cuba. 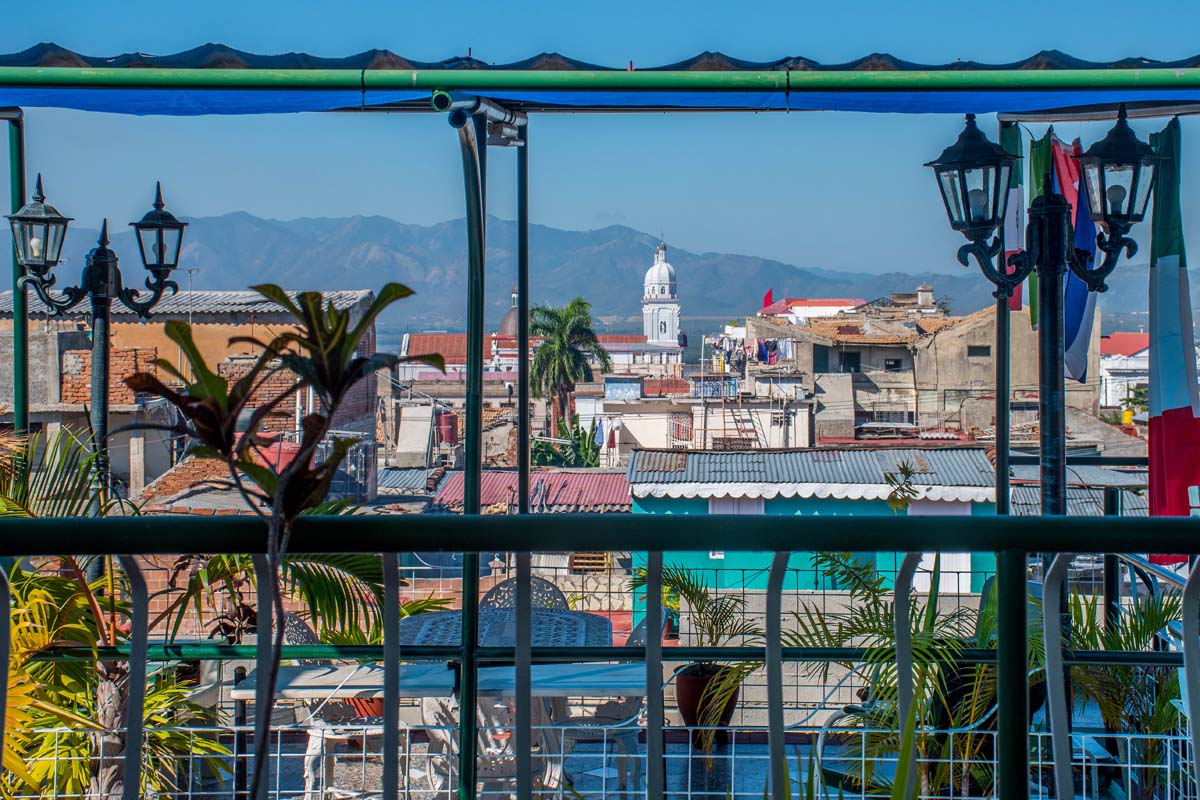 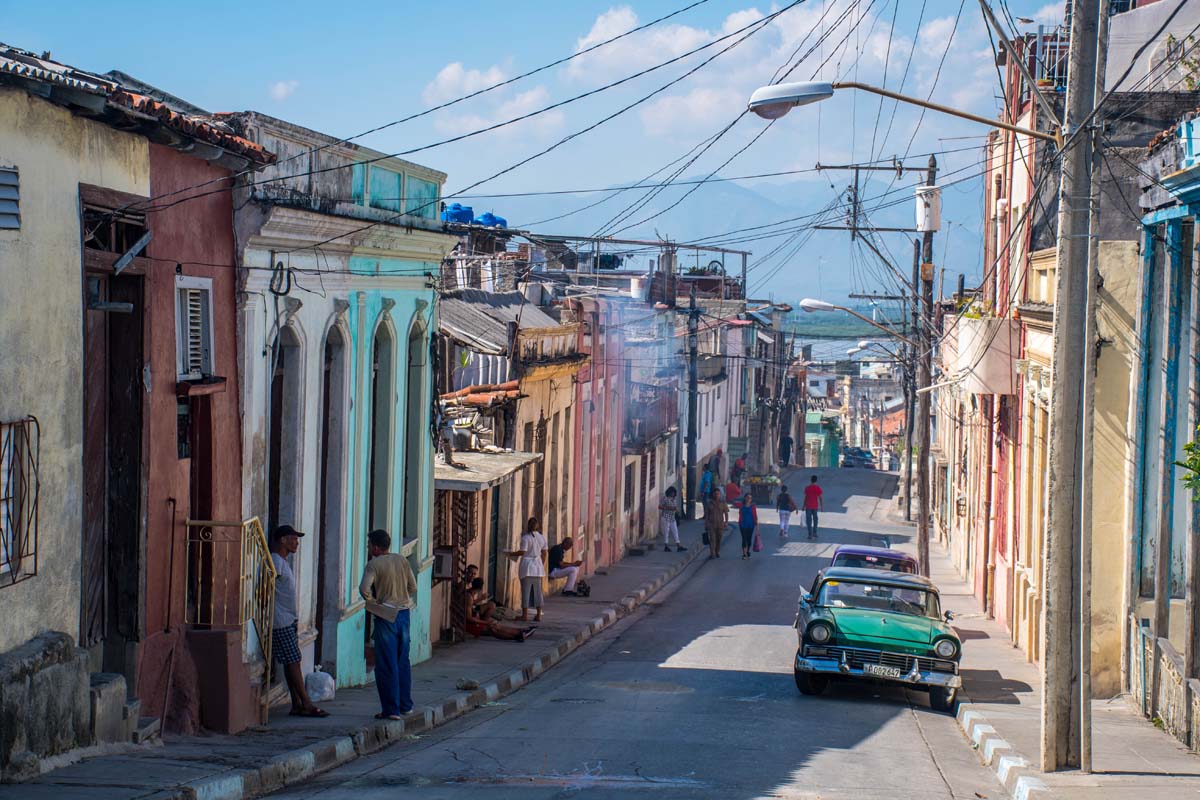 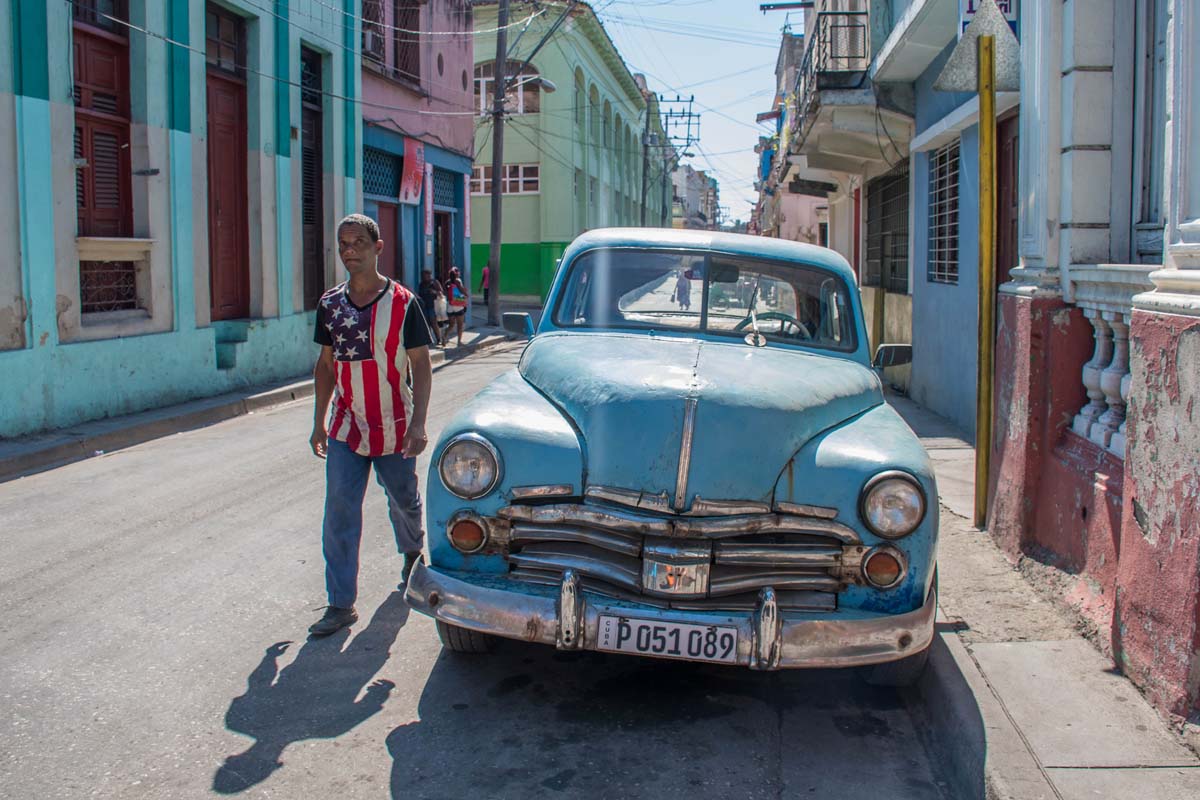 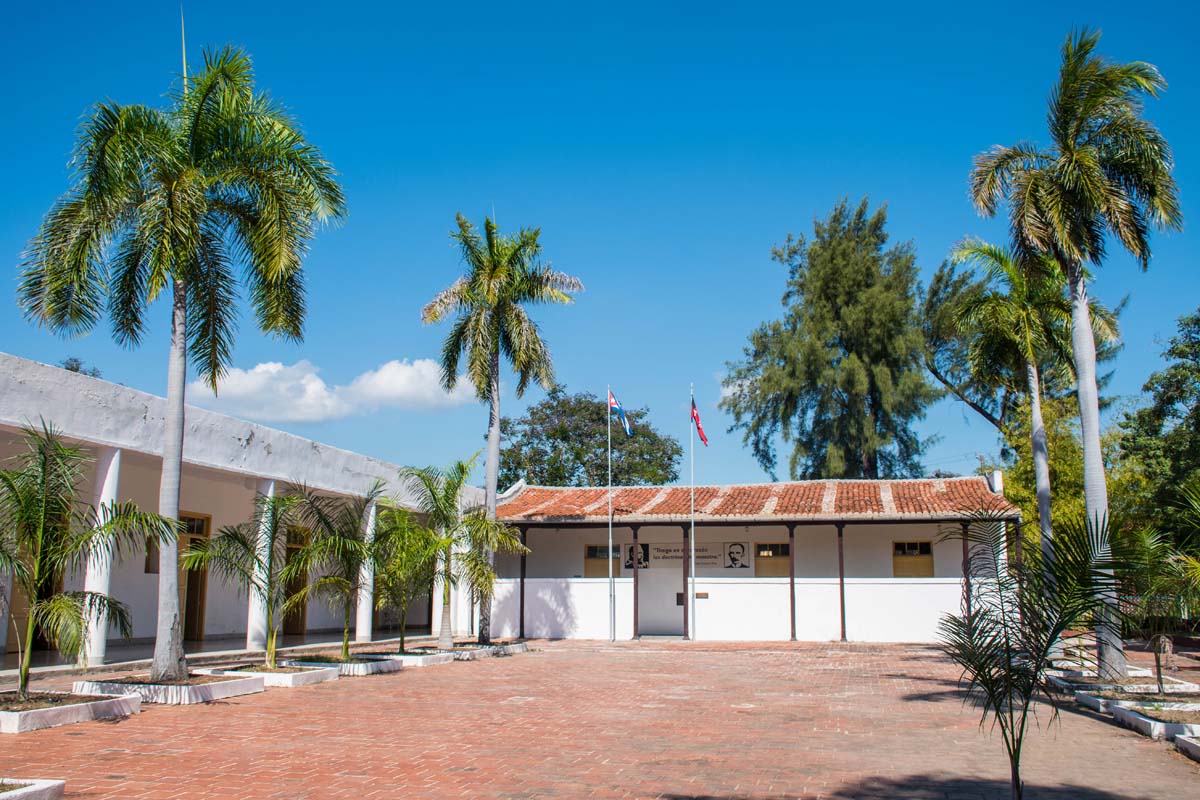 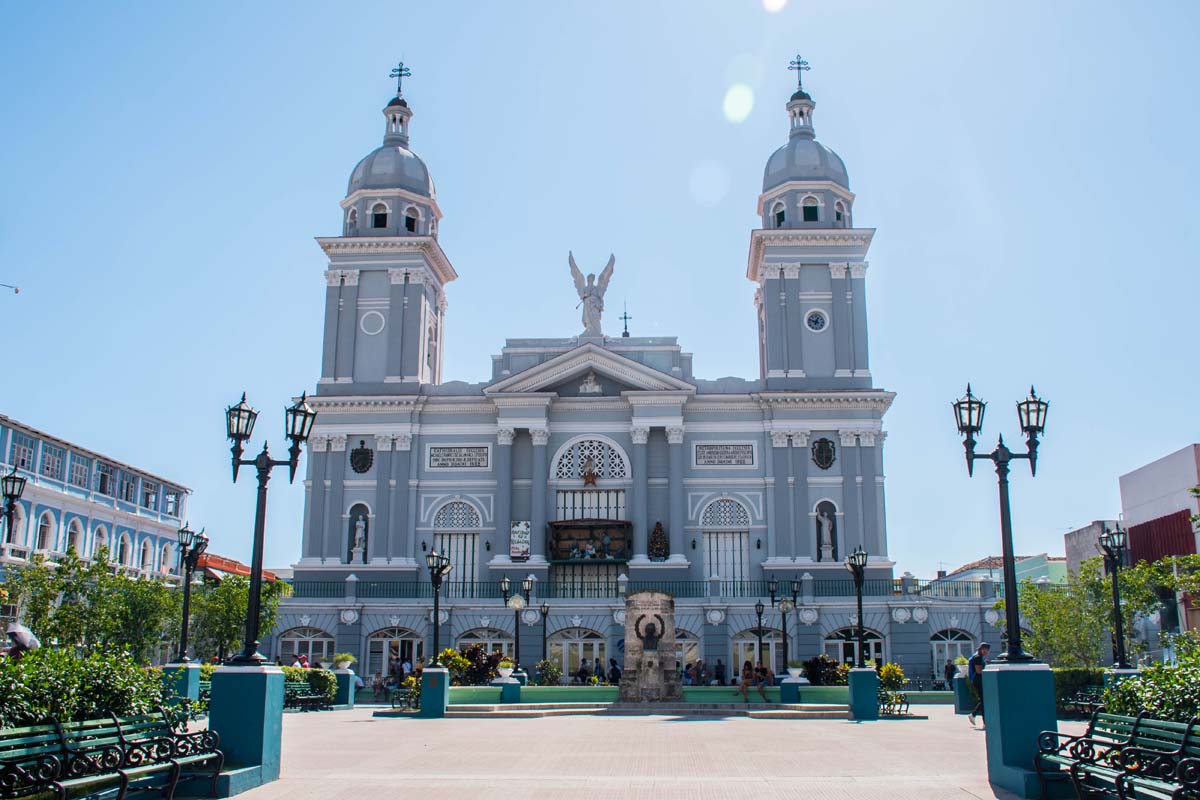 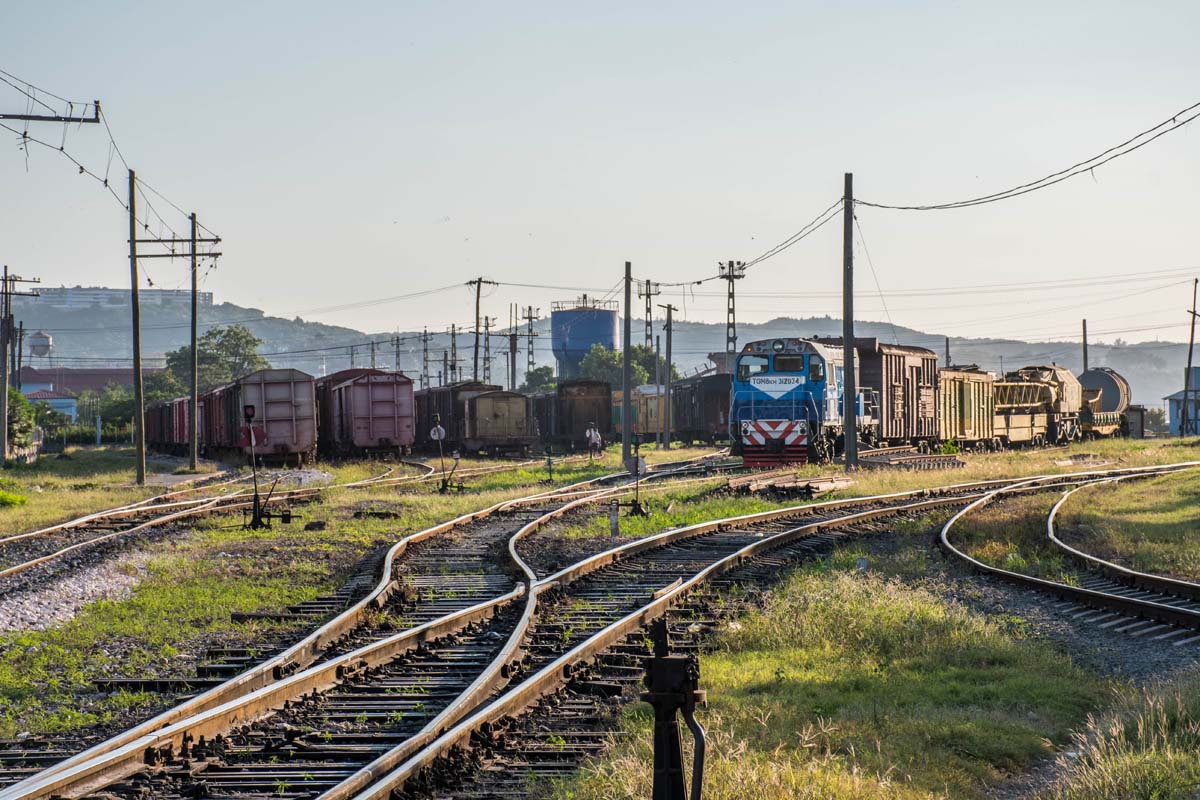 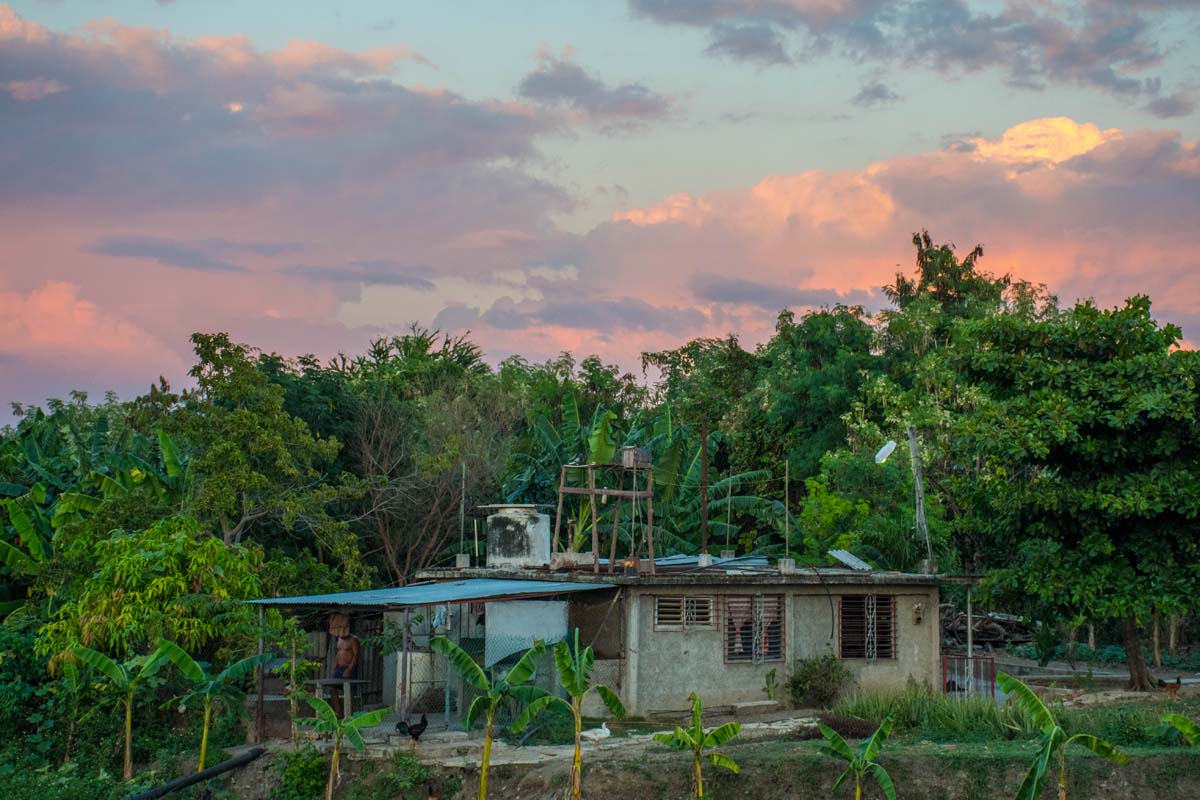 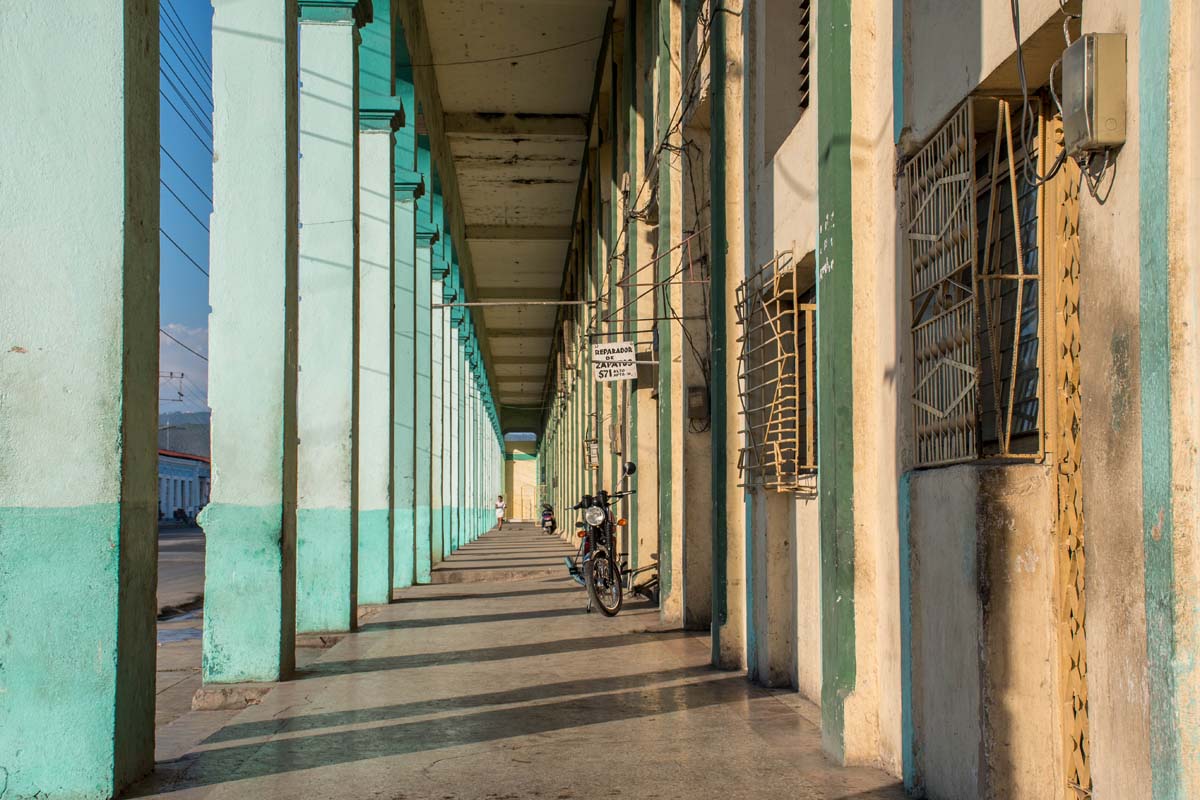