It is difficult to be a vegetarian in Mongolia. When asking for a vegetarian meal, it's very likely that you'll get a dish with meat, BUT some vegetables as well. Aurelien and I had told our guide we were vegetarians, but we were always served meat anyways. That morning, we got paté for breakfast - which even the carnivores among us found too hard to digest on an empty stomach. 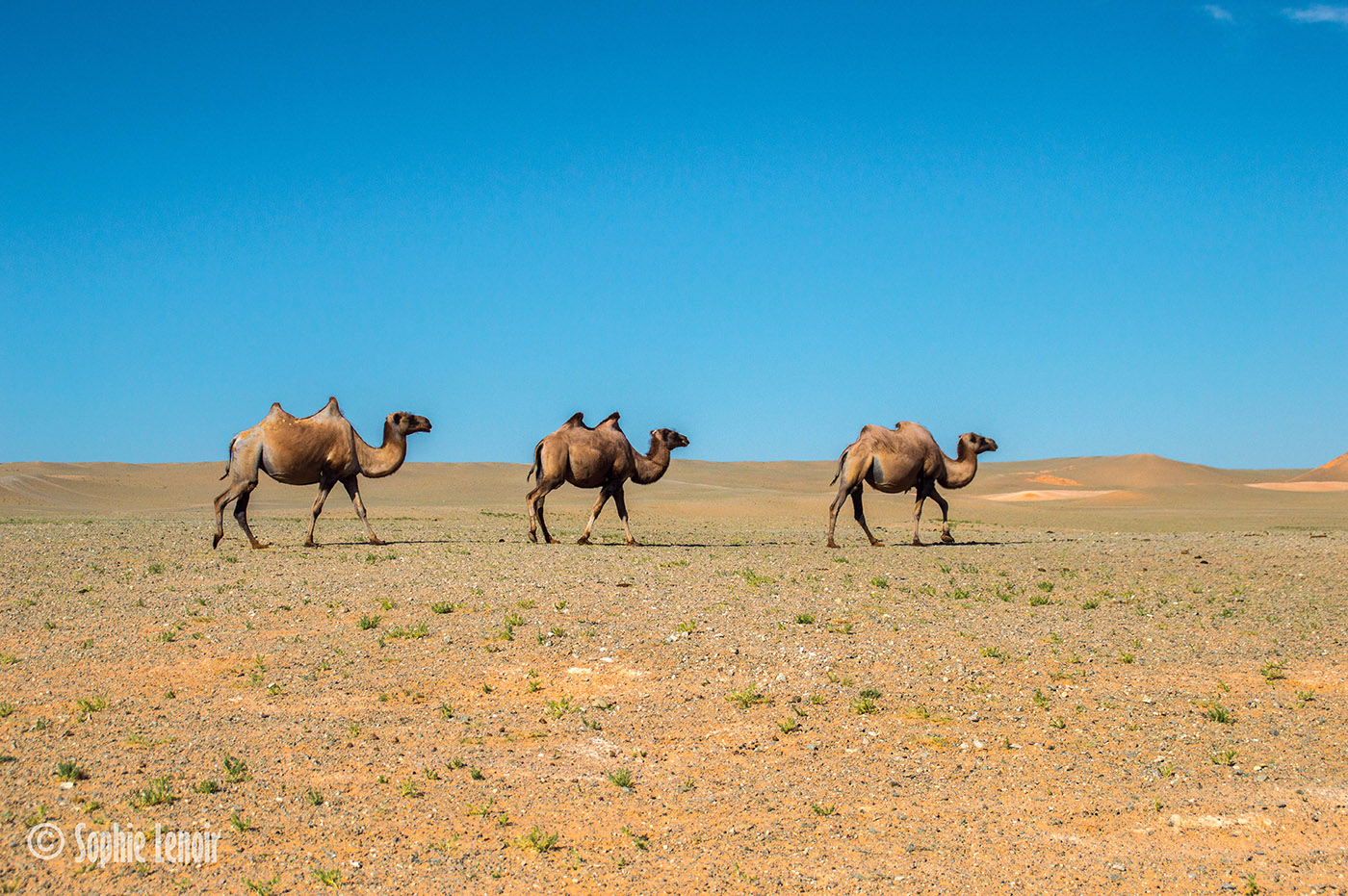 After stretching our legs and greeting the camels who were doing the same, we left the camp. It was really hot and we couldn't open any windows because of the dust. Given the car was getting overheated, we couldn't turn on the airconditioning anymore. The roads were bumpy and on top of that, the driver struggled to find the right way. We drove around aimlessly, rode up one hill, realised it was not the right one, then returned to ride up another. A pattern that repeated for quite some time. We passed a field scattered with holes in the ground; This was the work of the gold diggers looking for gold. 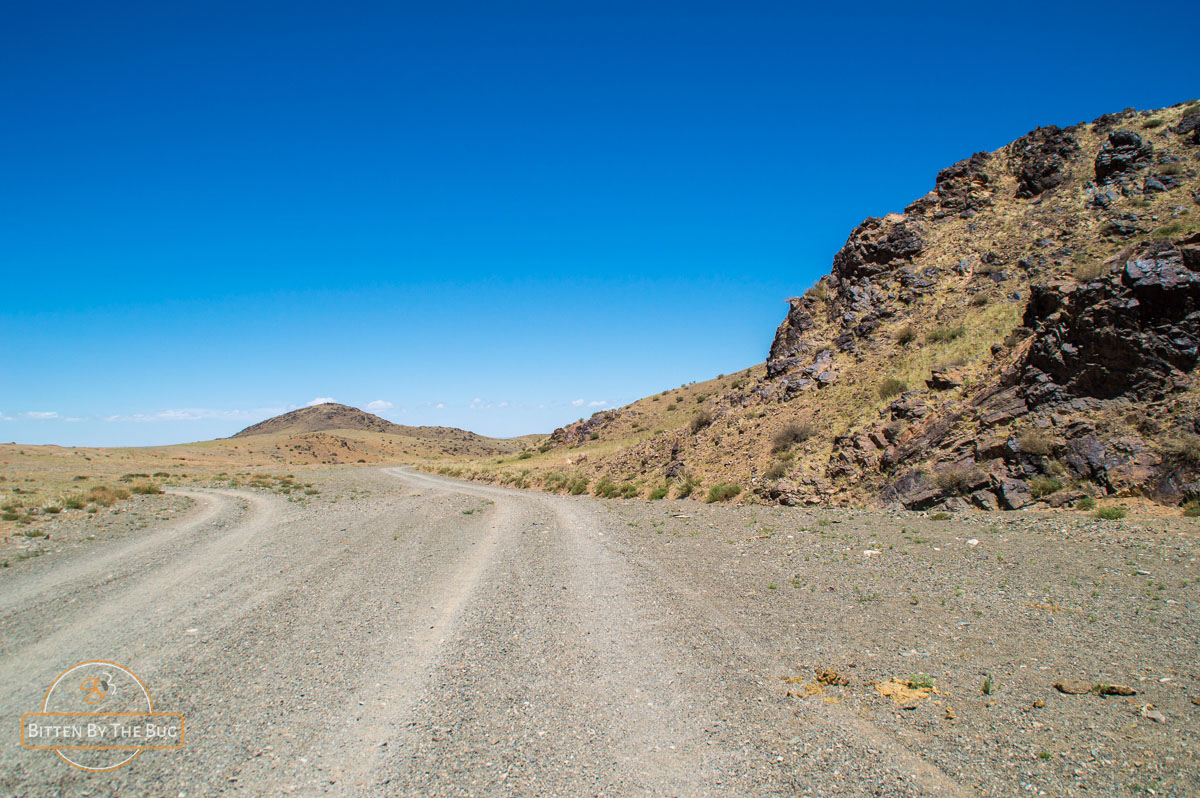 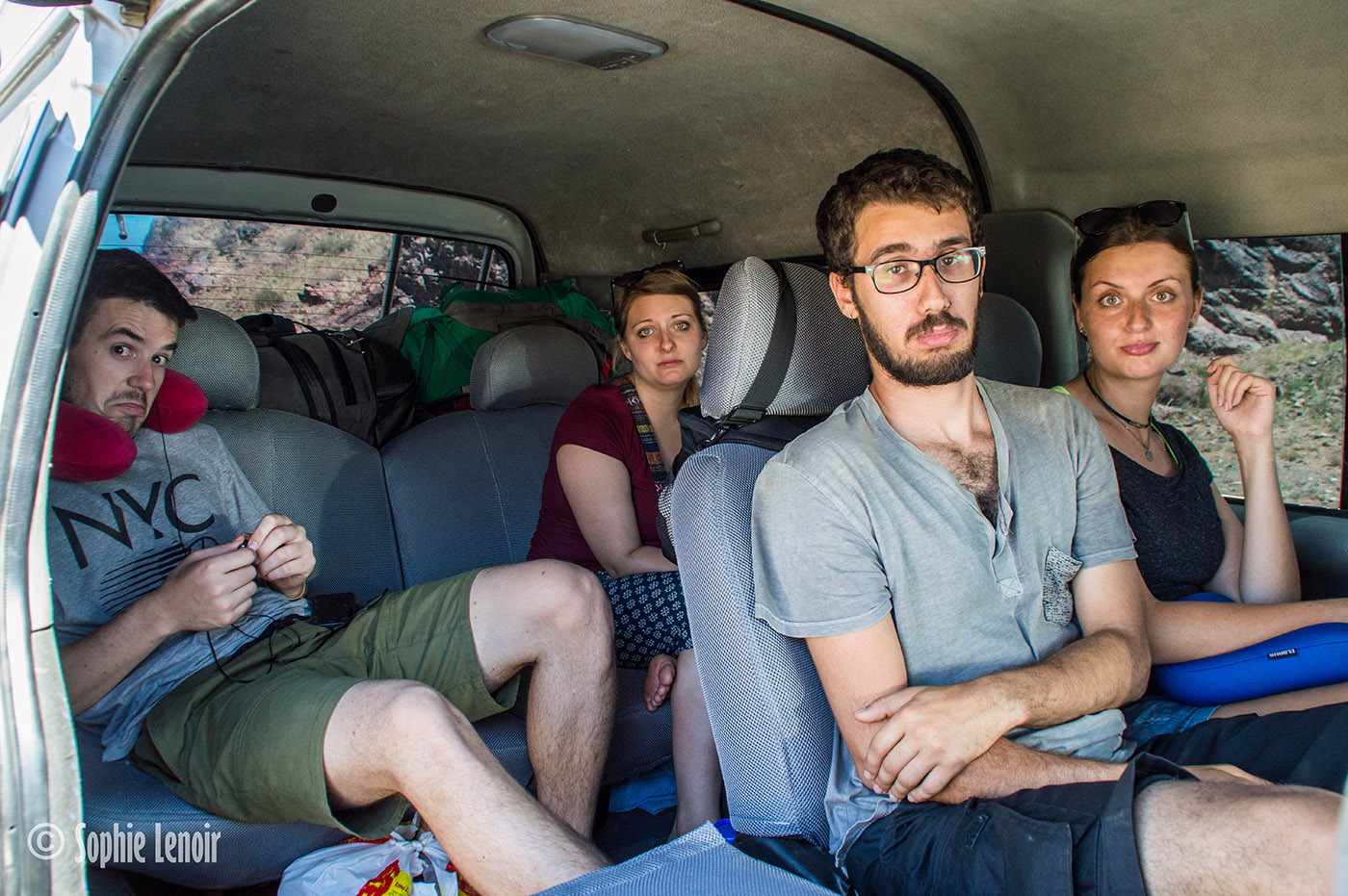 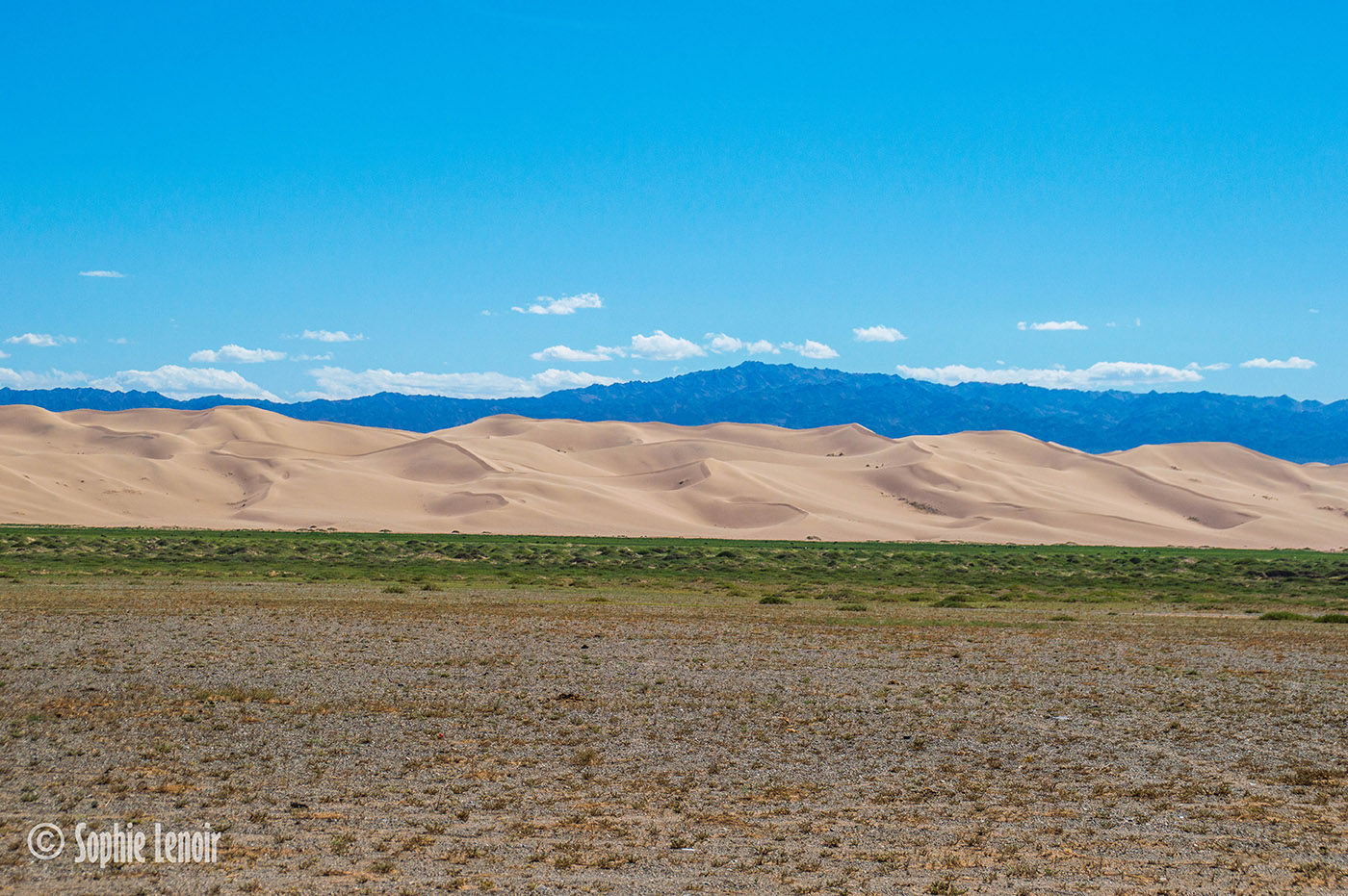 When we saw the sand dunes in the distance, we knew the end was near. Just a little more dust-biting until our final destination came into sight. Victoria and I were curious to meet the local family living at the camp, so we asked our guide if she could introduce us to them. She did, but after a while, she left us alone with the nomad family. None of them spoke English, so we kinda just stared at the family and especially their three year old girl who was enjoying herself with her guitar toy. Cuteness overload. 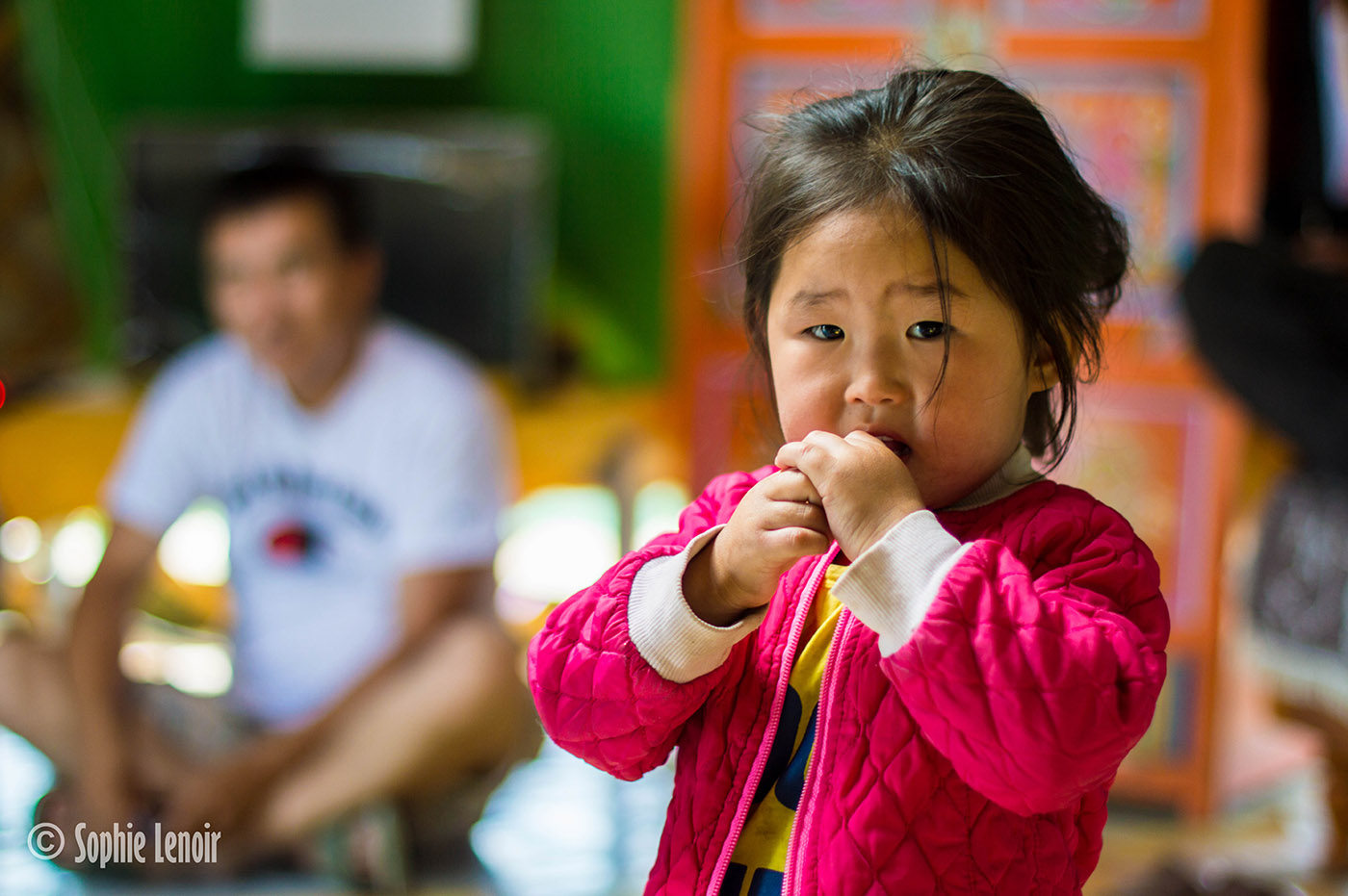 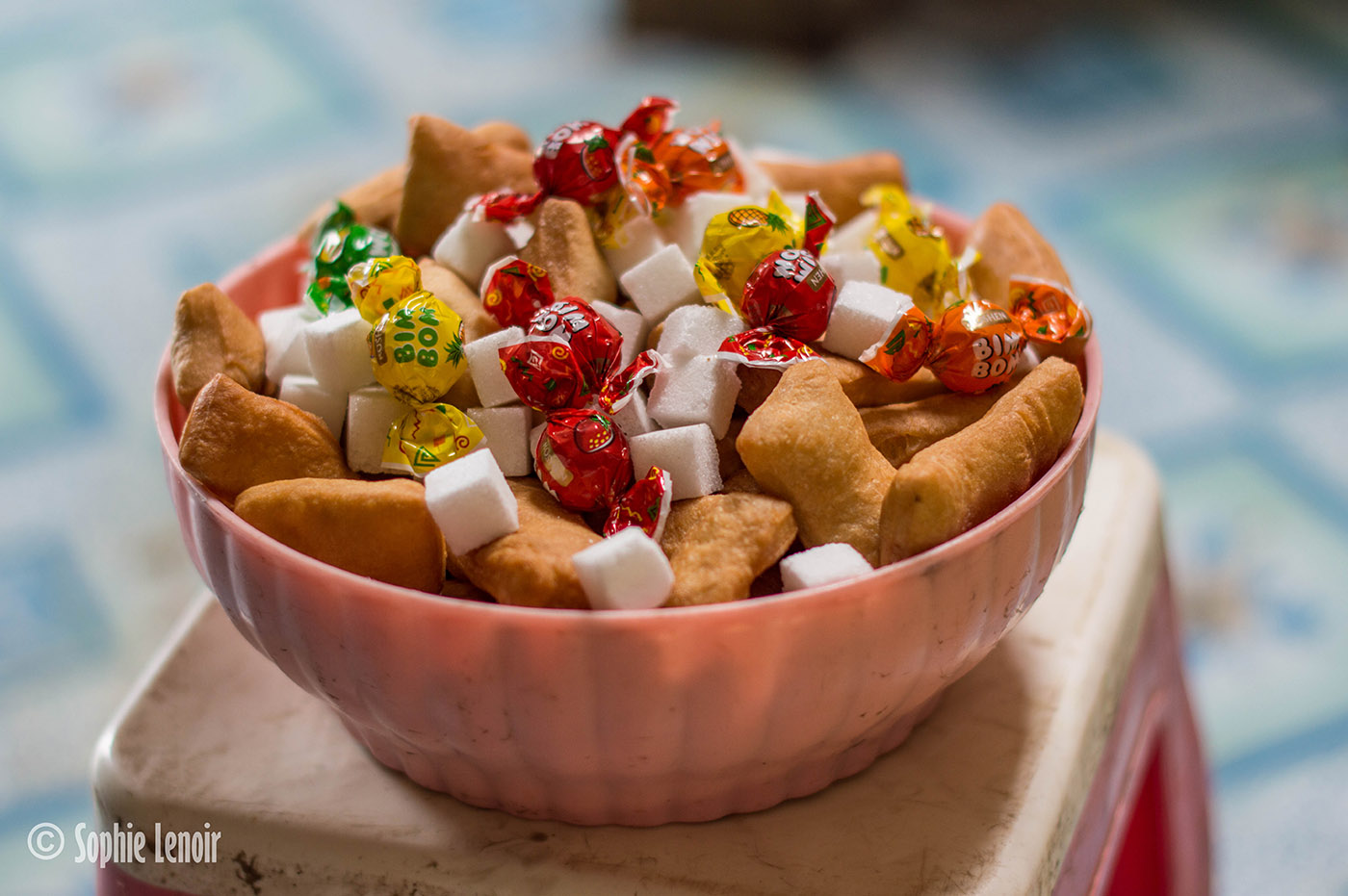 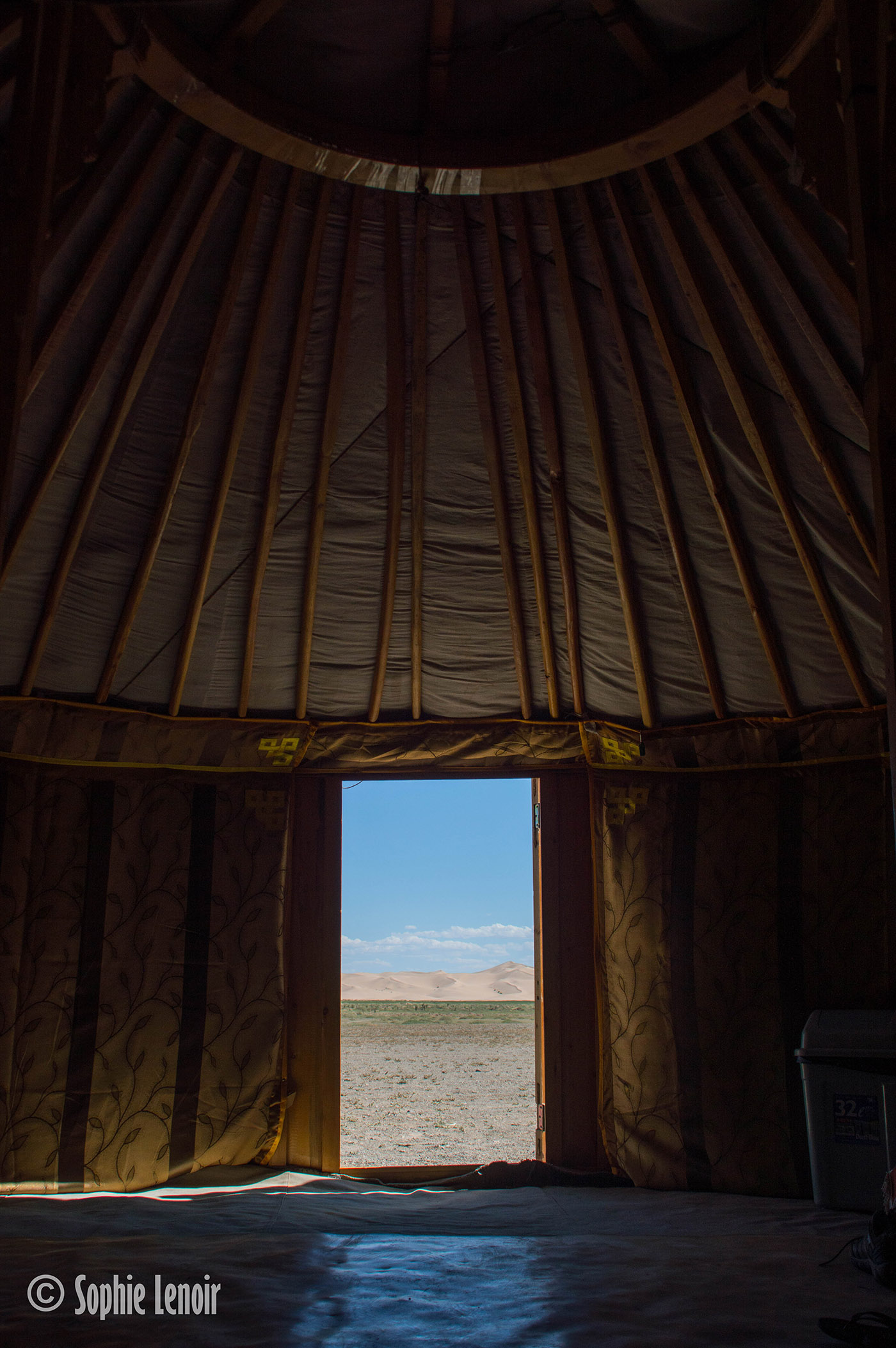 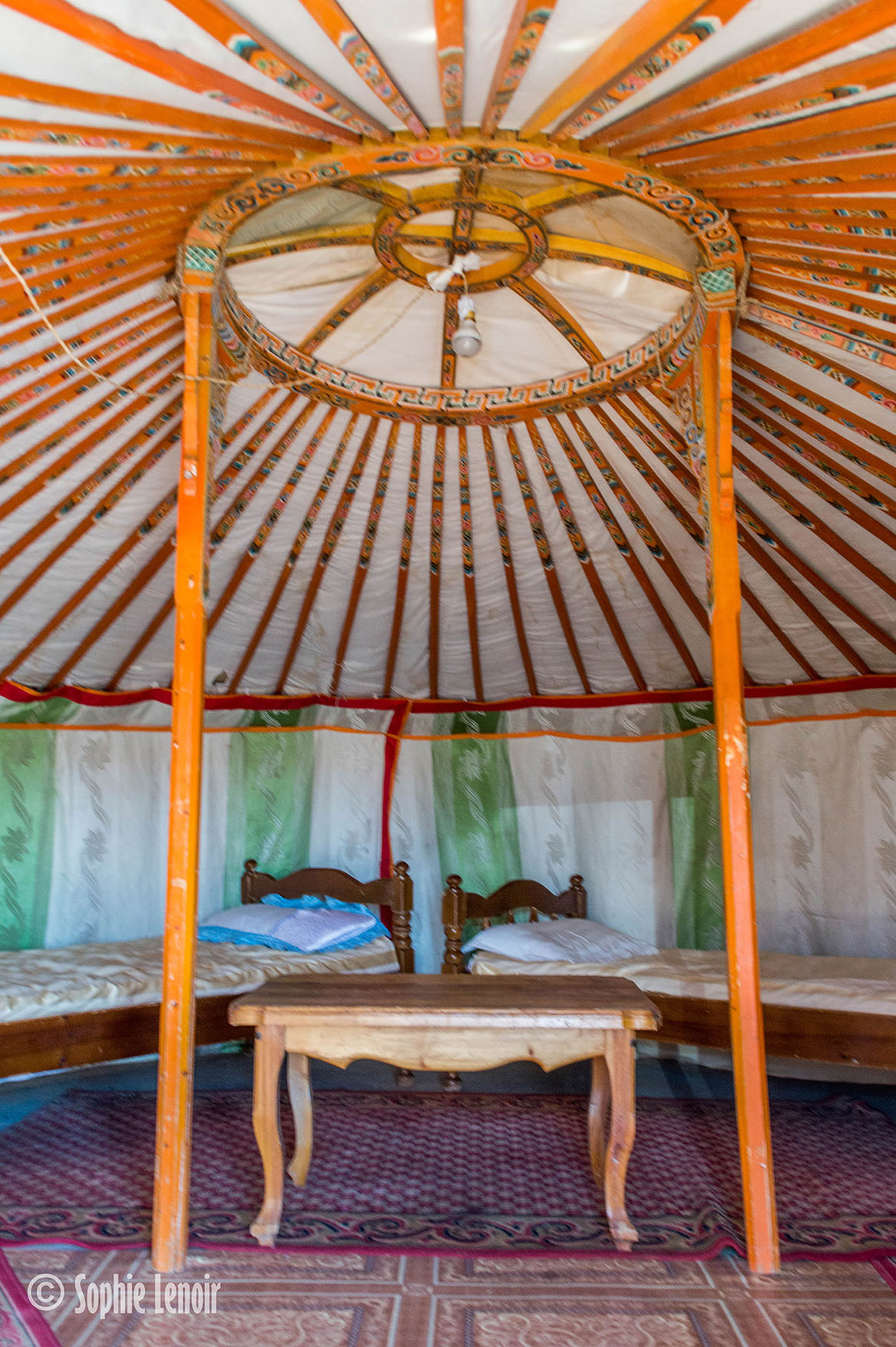 Actually, they did know one word in English: 'camel'. We interpreted it as a code word to leave the ger and let them have their privacy. A little later, our guide called us for the actual camel ride. Each of us mounted a camel, and then we walked in a circle on the open field behind the ger camp. The camel ride was a bit disappointing, because we had hoped to ride on the sand dunes instead of a doing a pony ride on a camel that was held on the leash by a nomad. 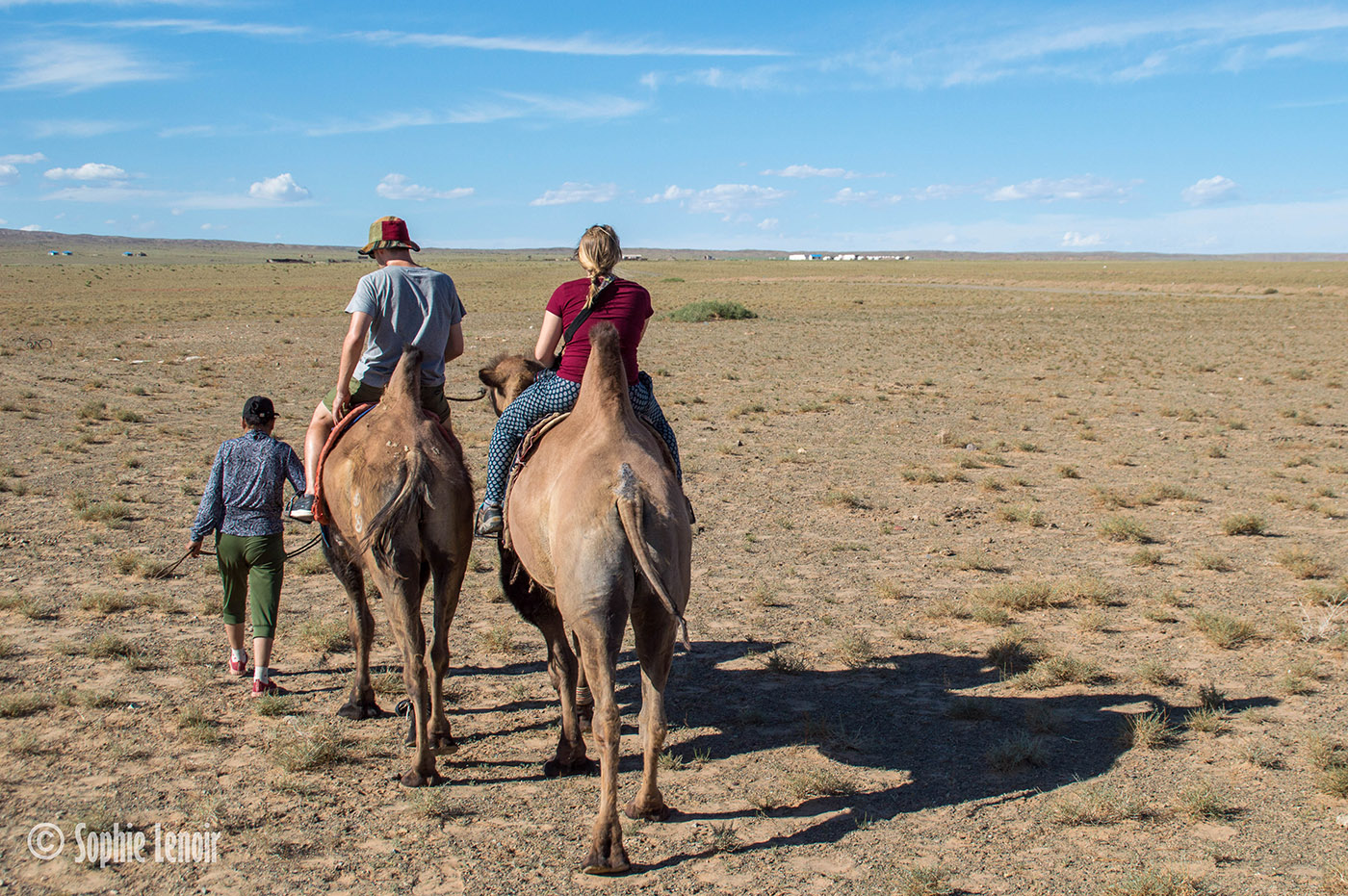 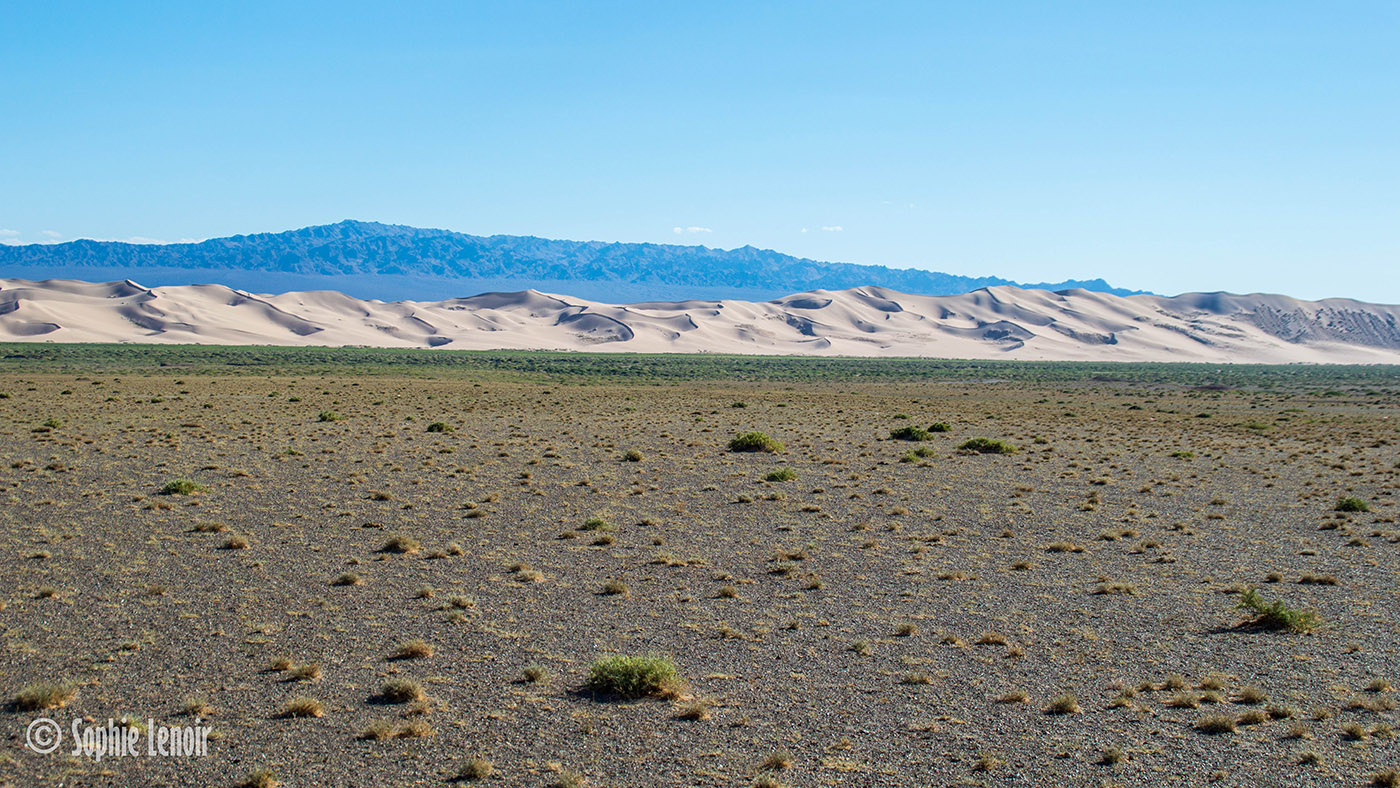 After dinner (where the vegetarian option was absent again) we drove closer to a large sand dune not far from the camp which was about 100 meters high. This was Khongoryn Els, known locally as Duut Mankhan. Some people were sitting on top of the highest sand dune and one of our group members pointed out we should climb up there too. I thought they were joking... they were not. So we started ascending this huge sand dune. The beginning was okay, it was not too steep. But somewhere halfway, it became that steep that I had to climb up on my hands and feet. And every time I took a step, I slid half a step back. It was really hard work. After little less then an hour, we finally reached the top. Right on time, as the sunset spectacle was about to begin. The view was amazing. This tour involved a lot of driving, but every day the views at the end definitely made up for the long distances. And they were getting better day after day. 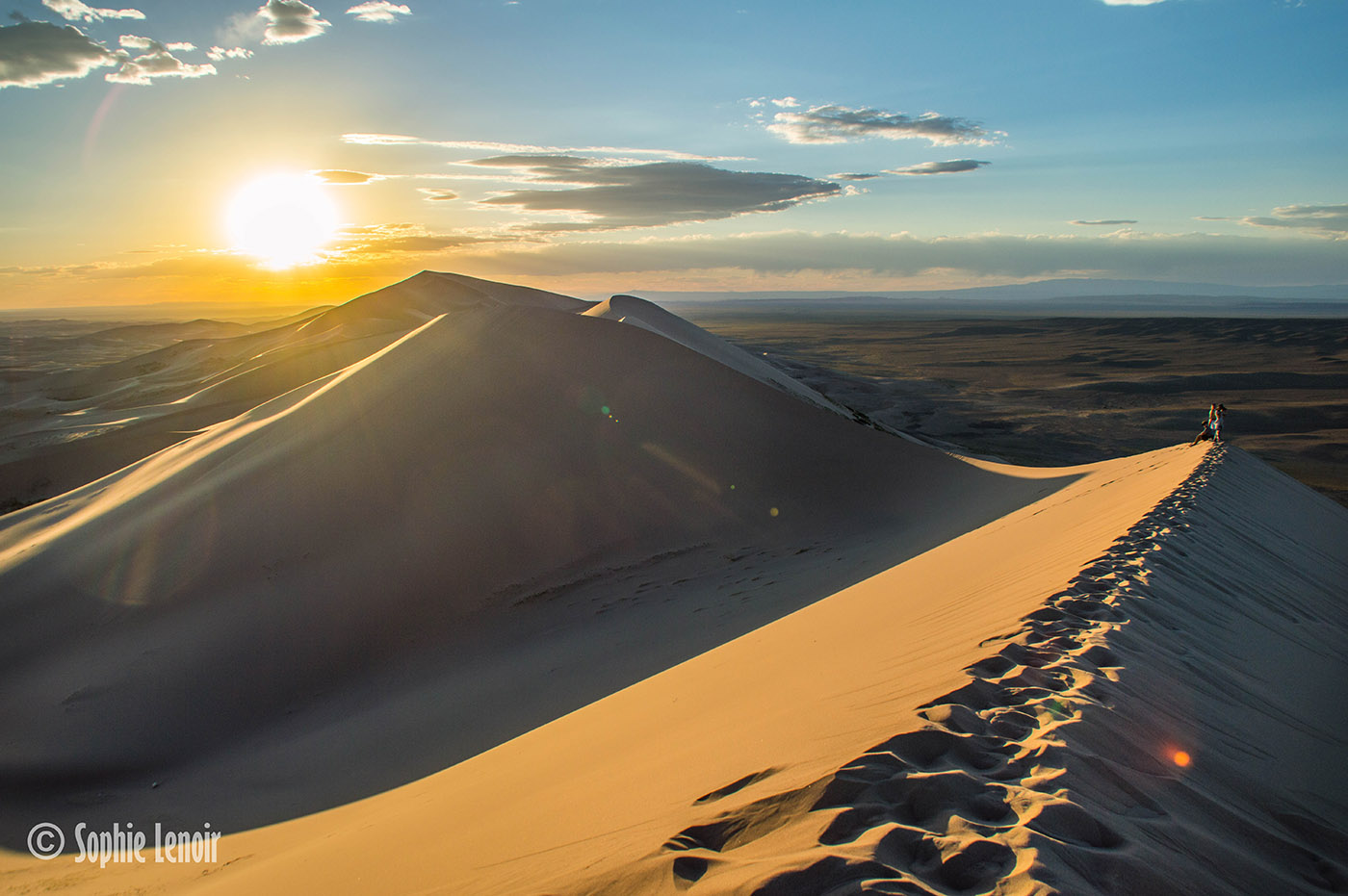 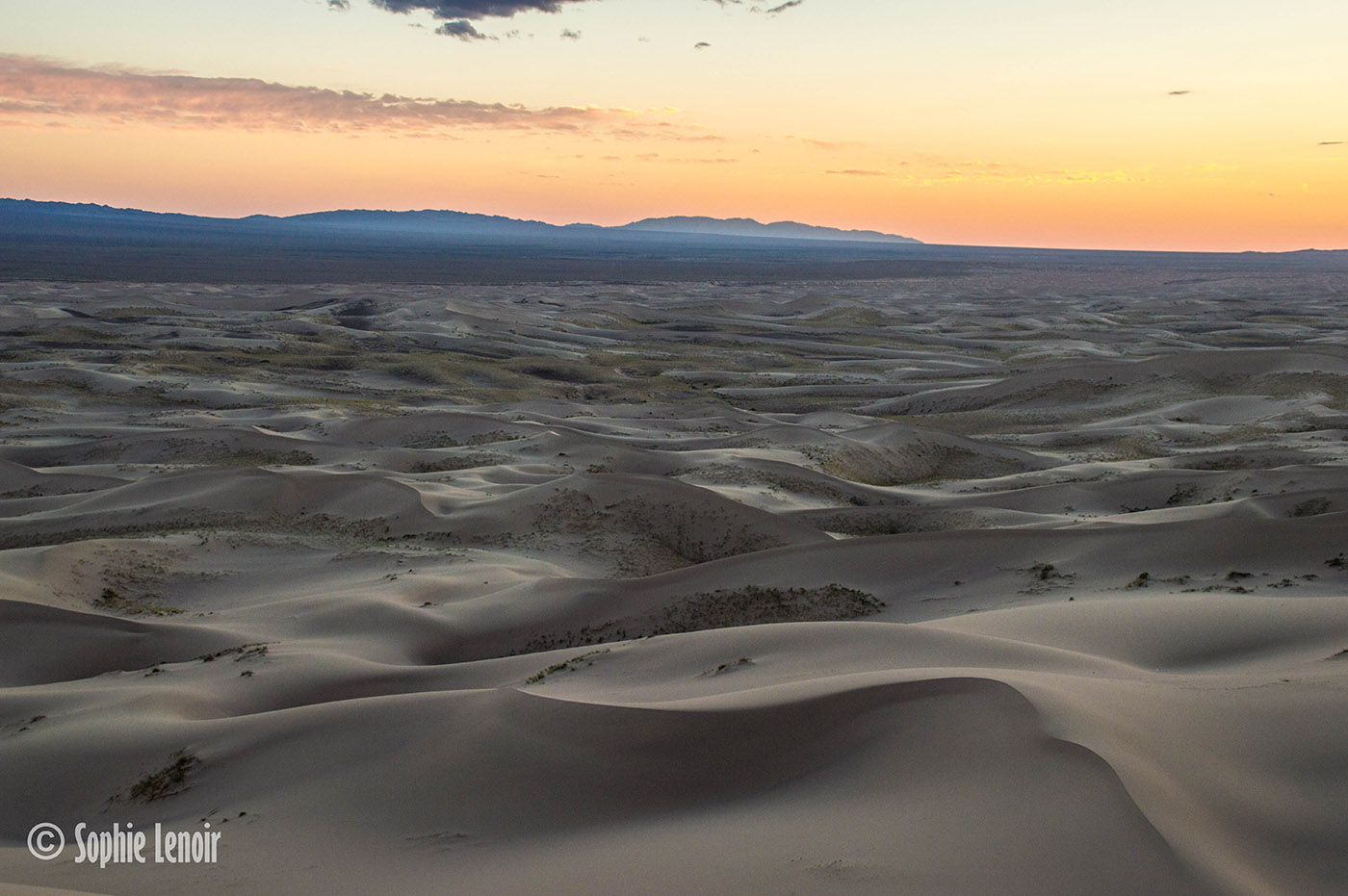 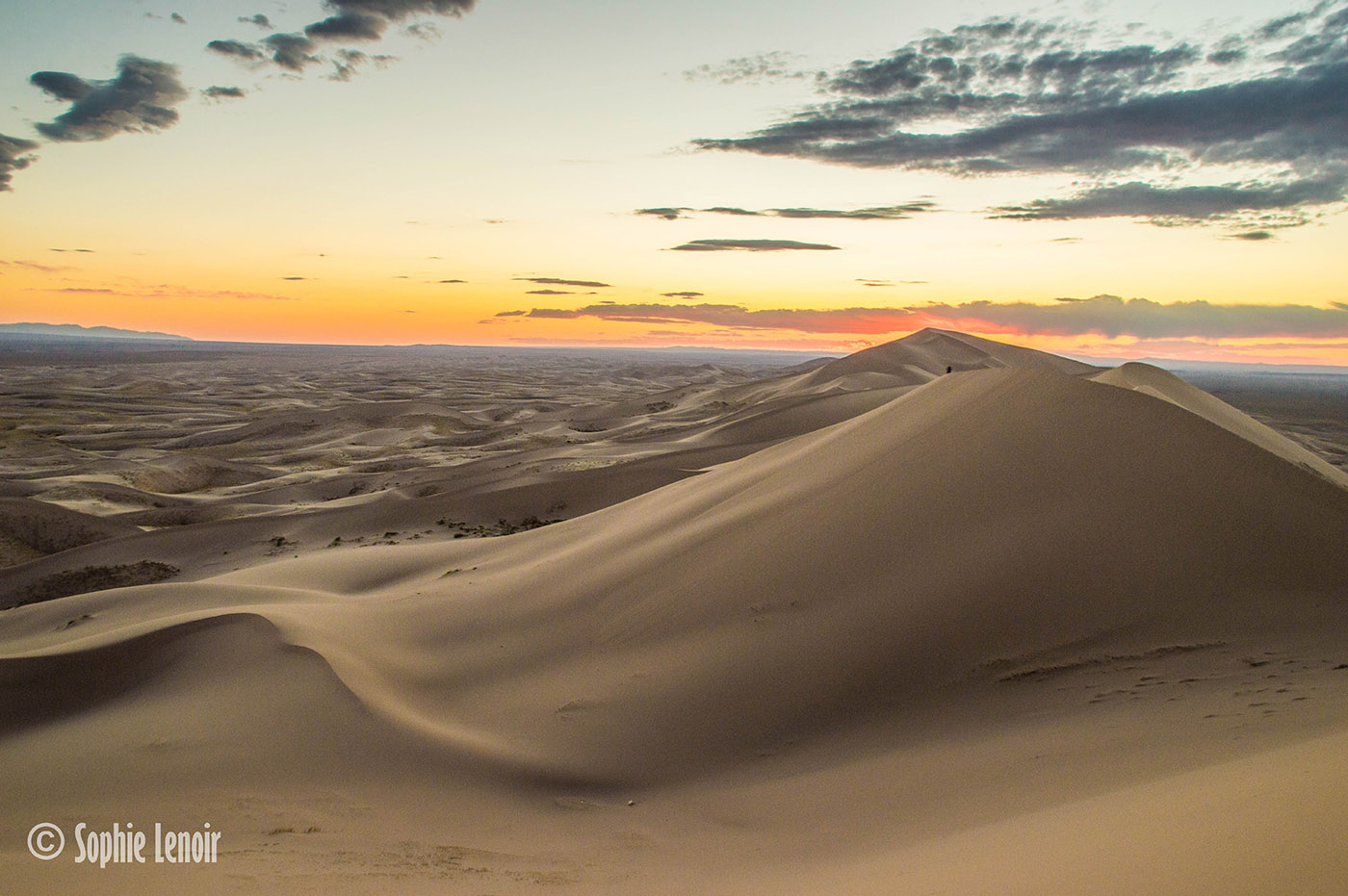 When the moon stood higher in the sky than the sun, we began our descent. People were running down the dunes and let themselves fall in the sand, then rolled down. They were having so much fun. Carrying my precious camera on me, I opted for the more secure and fall-proof way of coming down. I sat on my bum and slid down. This was funny too, as sliding over the sand produced a loud noise, similar to a long and loud fart. It is for this reason that the dunes are nicknamed 'Singing Sands'.

At the bottom of the sand dune, I found the others sitting outside 'the Coca-Cola ger'. There was nothing around here in the desert, no village, no shops. Yet, here, in the middle of this nothingness, you can buy soda. Coca-Cola must be doing great business in this country, as many people seem addicted and hardly ever travel without a 2 liter bottle of coke. 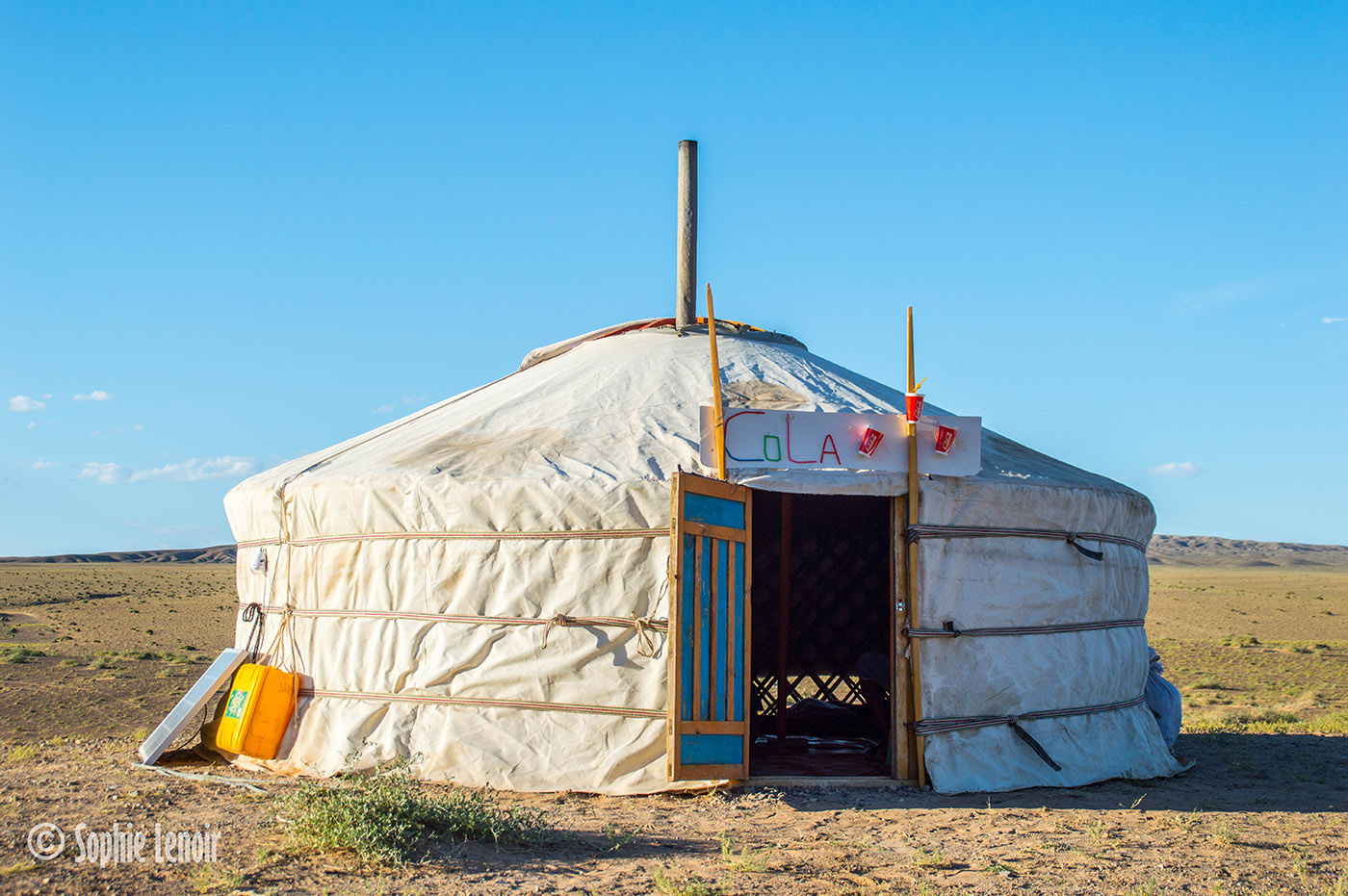 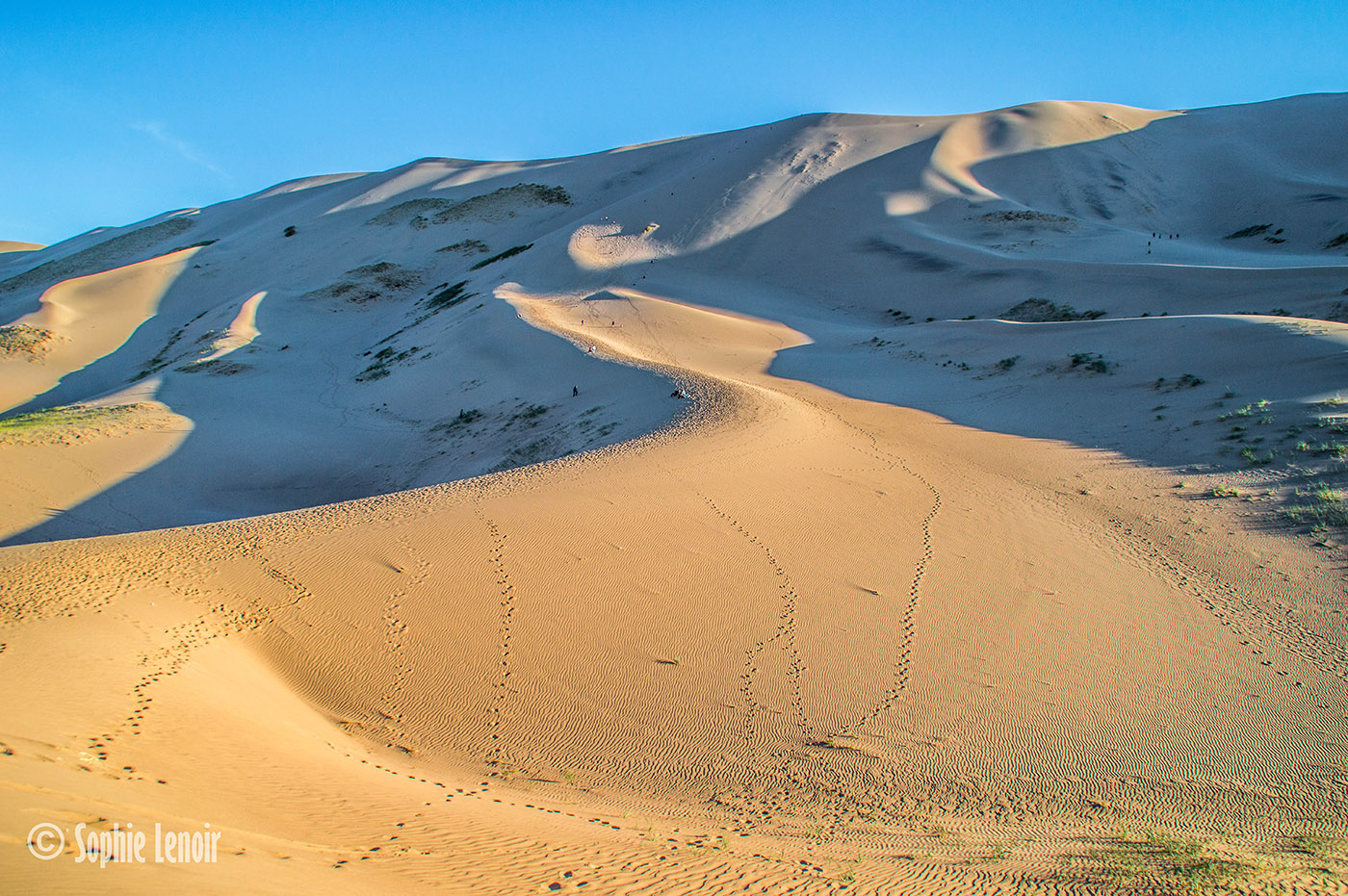 Back in the ger, we had something to celebrate: it was Rodrigo's birthday! We had secretly bought a cake and birthday candles. Add some beer, Ghengis Khan vodka and red wine infused with milk and chocolate (tastes like Baileys) and there are all the ingredients you need for a memorable birthday in the desert. 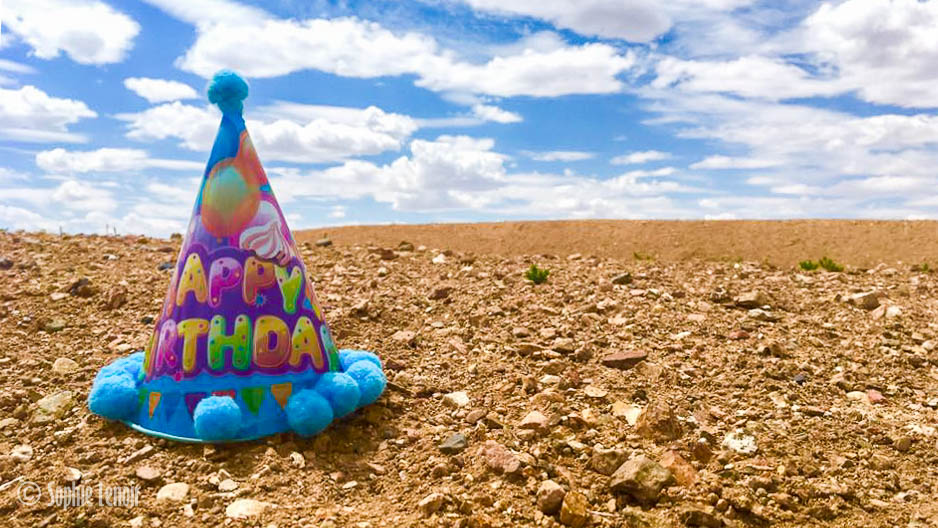 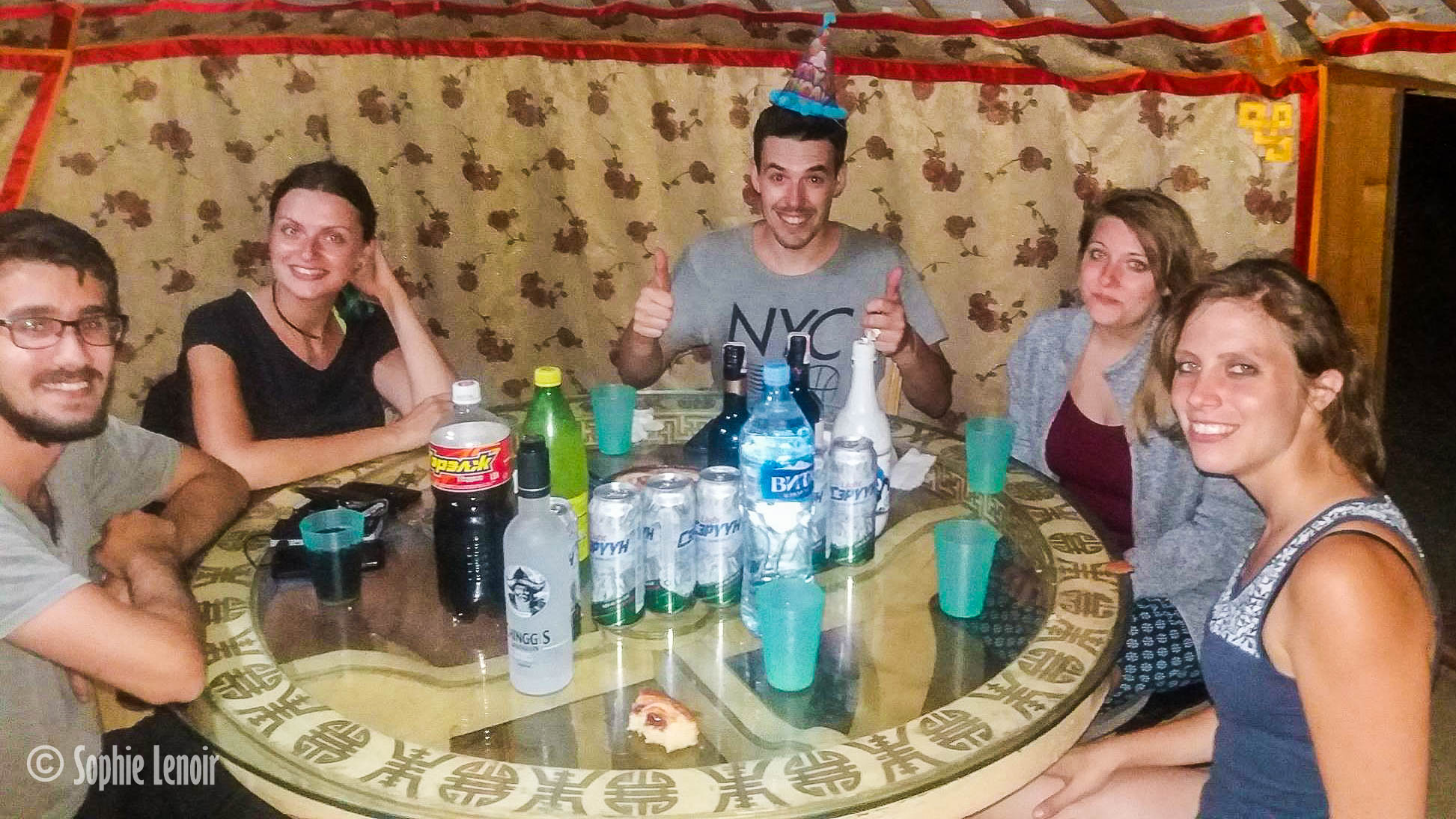 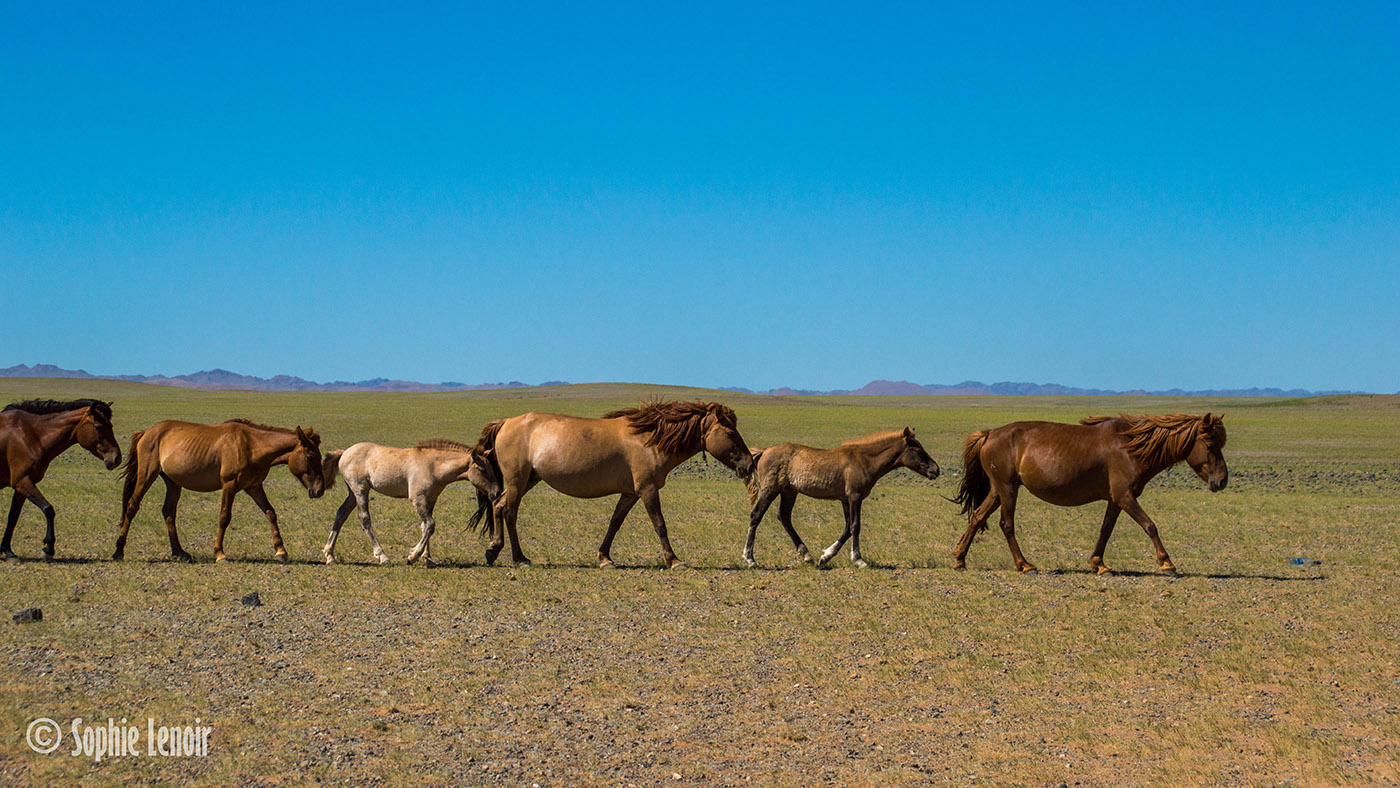 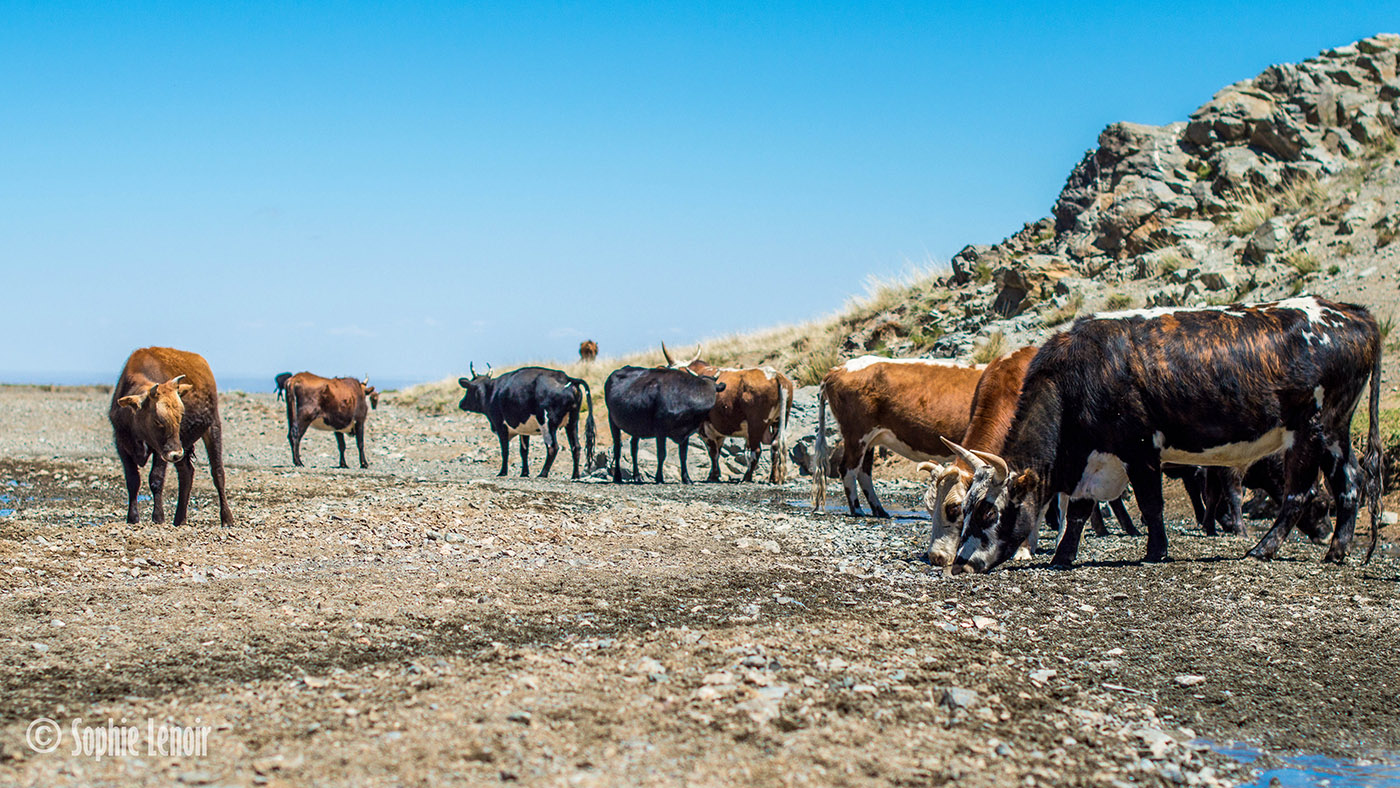 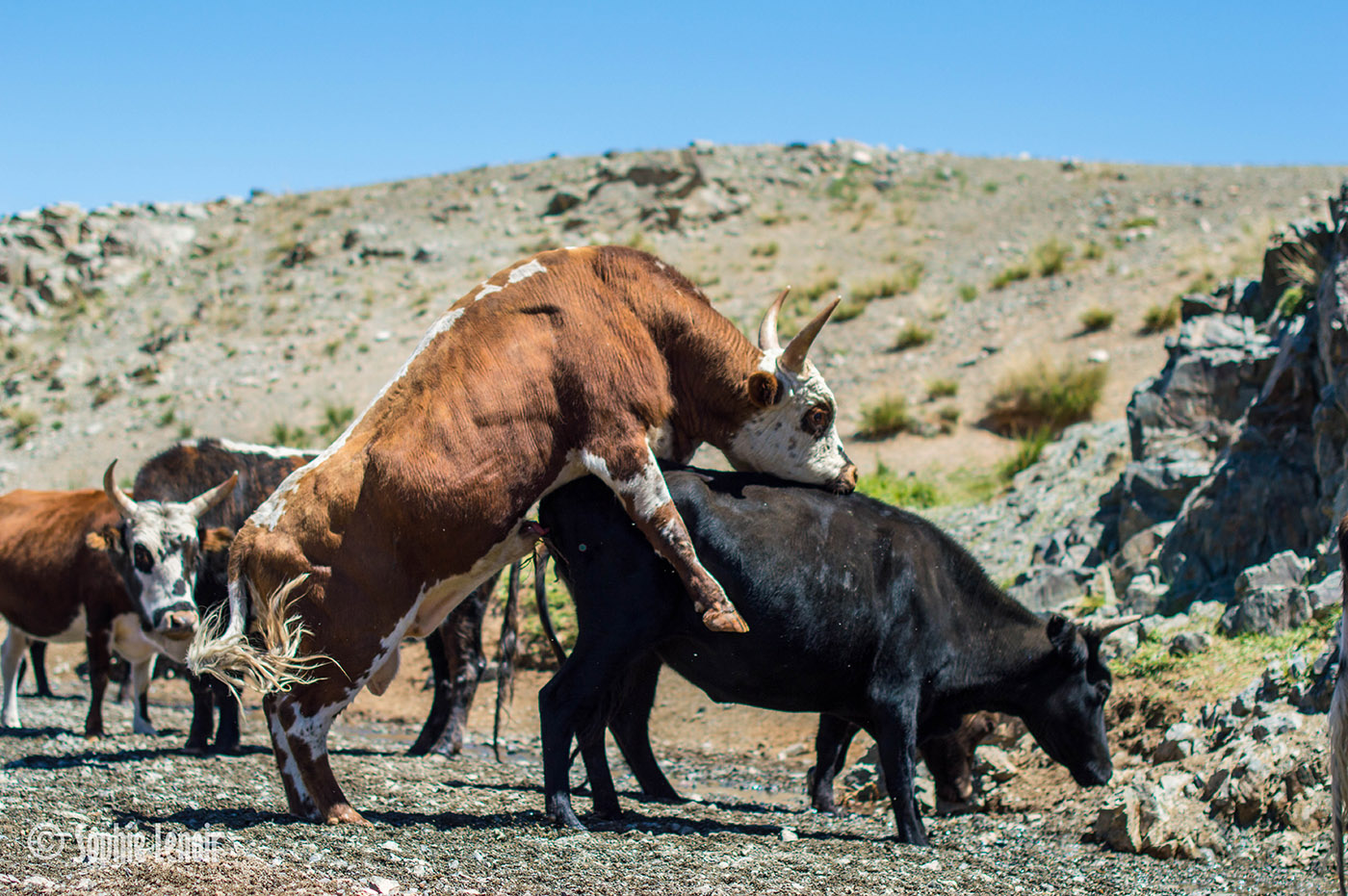 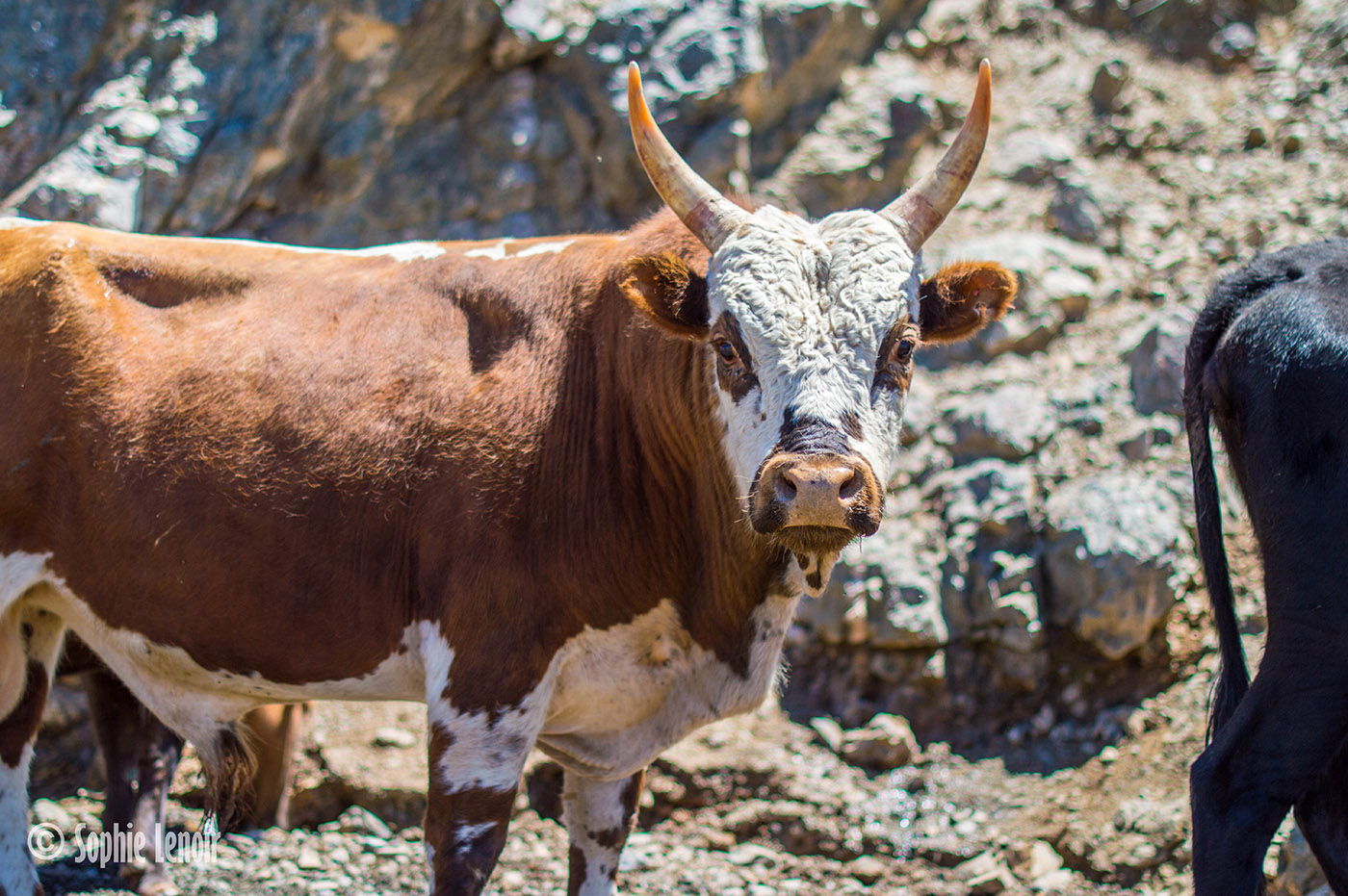 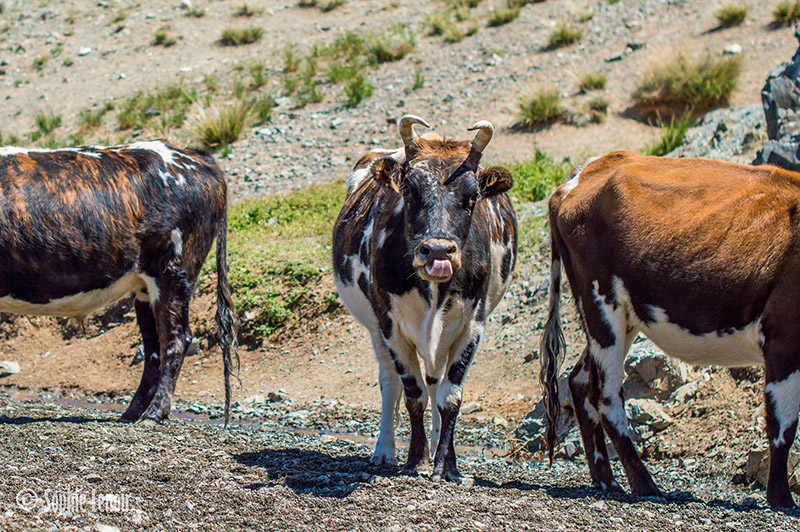 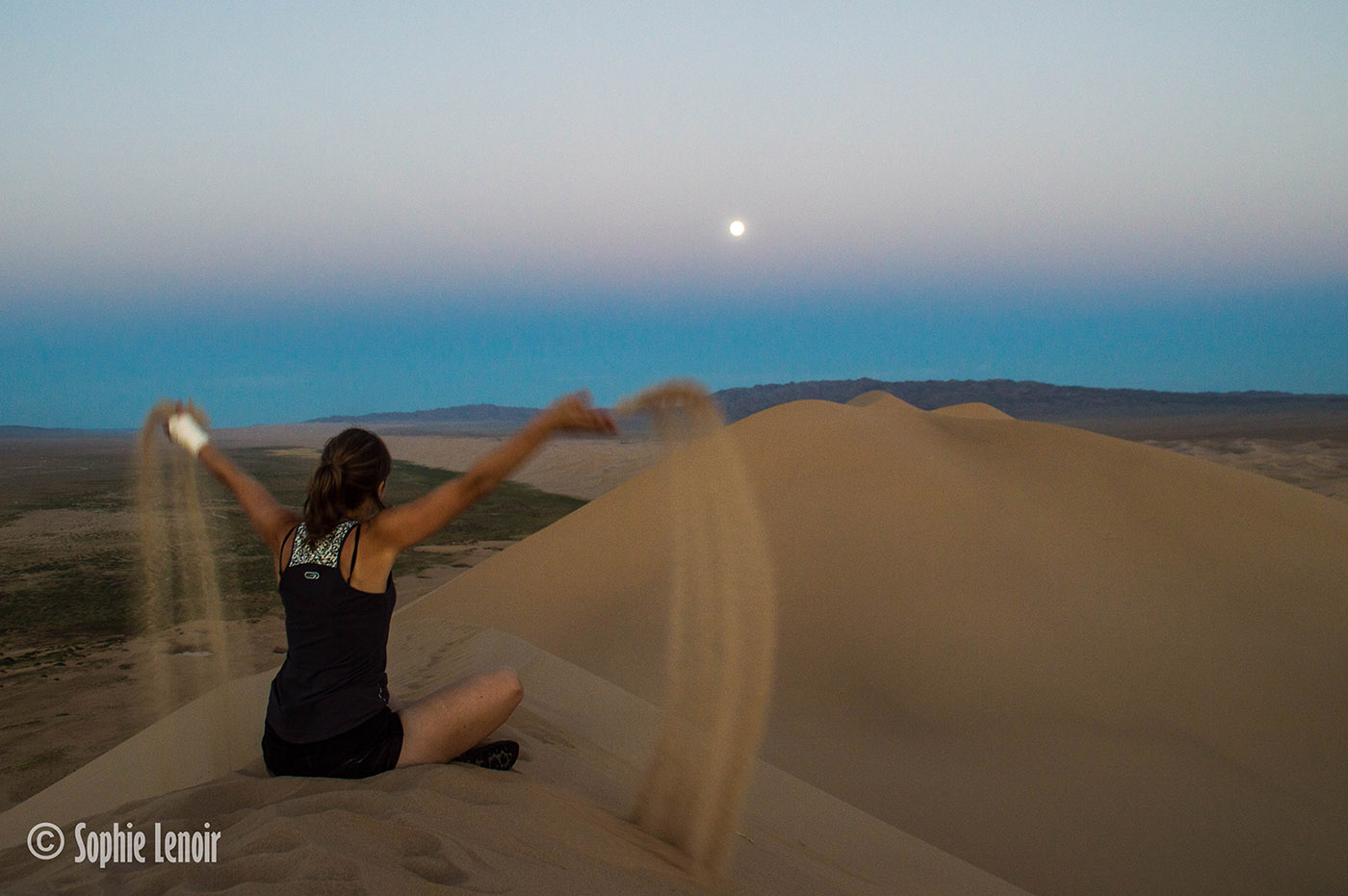 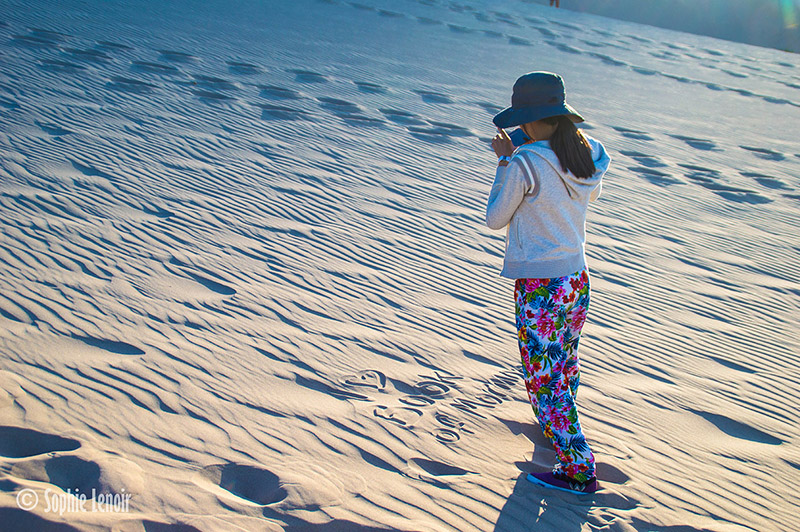 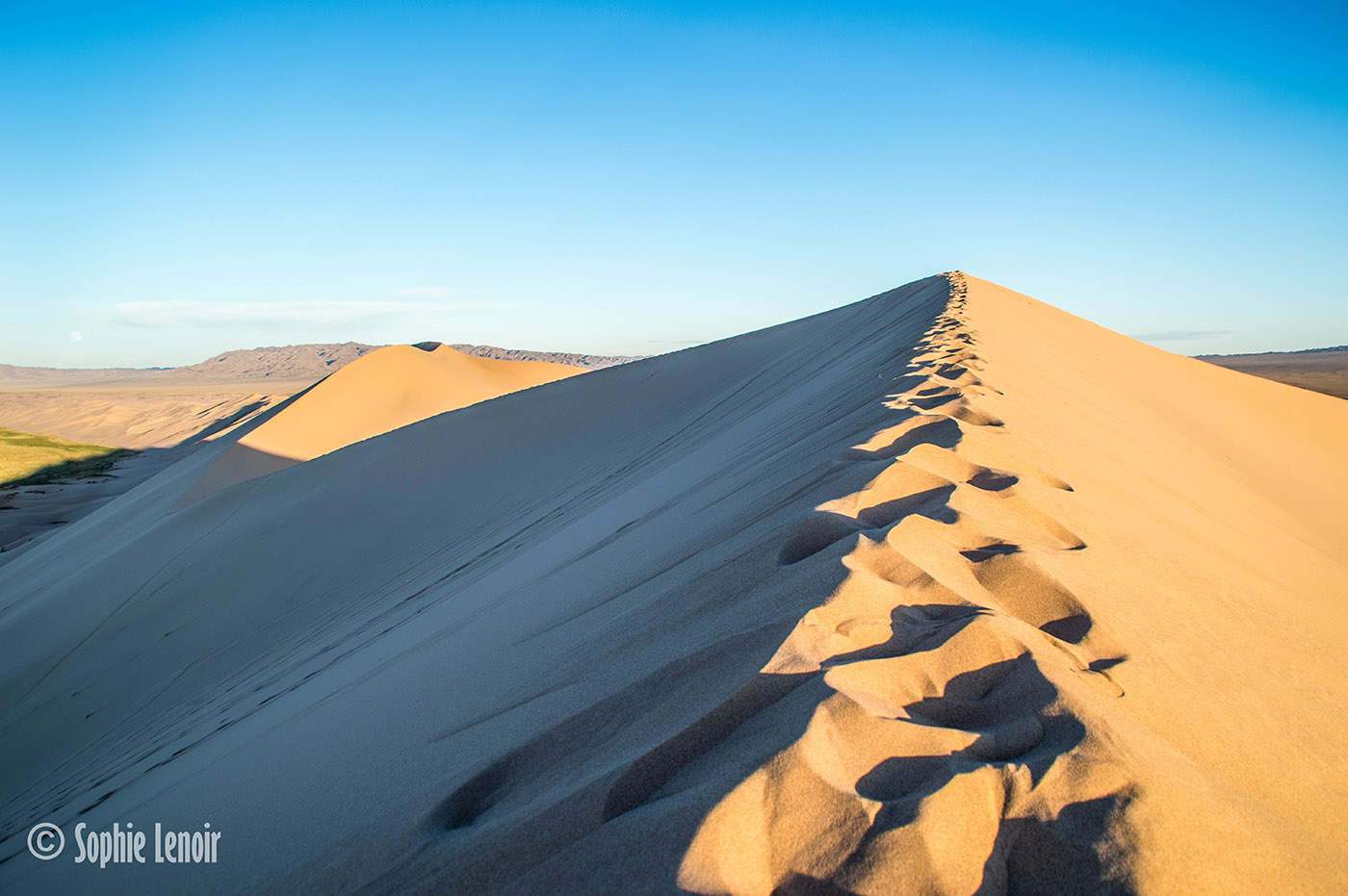