Starting from Ulaanbaatar, we wanted to explore the vast country of Mongolia and see its different landscapes. We would start by visiting the Gobi desert, a vast region of desolate land stretching from northern China to southern Mongolia. Due to its vastness, traveling around the area and visiting its attractions is quite challenging and almost impossible without a tour and a tour guide.

Online, I had gotten in touch with fellow travelers who wanted to go there in the same period as us. So together, we approached a travel agency and arranged a five-day tour in the southern part of Mongolia.

As soon as we got off the train from Beijing, we were greeted by a girl holding up a paper with a name closely resembling mine. That was Jessica (I've given up trying to remember the original names) who would be our tour guide for the next six days. She brought us to the hostel, where our travel companions had already arrived and installed. We were introduced to Victoria from the US, Rodrigo from Argentina, and Karen en Roberto from Malta. They were a cool bunch of people with whom it would be a pleasure to travel around. We knew that immediately.

Before starting our tour, we had a lot of practical things to arrange. We had to exchange money, go to the supermarket to load up on snacks for the tour and buy a Mongolian SIM card. Having completed all these chores, we were ready for dinner and went to a Korean restaurant. Fearing we wouldn't get enough food during the next few days, we ordered double portions. Little did we know that Korean portions are huge...

At 9 am, we met our driver and tour guide who picked us up from our hostel. Our tour guide was a very enthusiastic (and that's an understatement) 25-year old girl who wanted to get to know us and who loved killing time with introduction questions. Meanwhile, we drove for hours and hours -which we would soon learn is unavoidable if you want to visit Mongolia- on seemingly the only road going south. Not long after leaving Ulaanbaatar, the landscape changed into a desert-like steppe. For five hours, we drove without seeing anything but herds of suicidal goats that kept on crossing the road just in front of our car. Around 13:00, we stopped for lunch in the middle of... nothing. In the absence of shade, we ate our lunch while standing under the sun, next to the car. A pattern that would soon become standard routine. The sky was nice and blue, with perfect, fluffy clouds straight out of a cartoon movie. 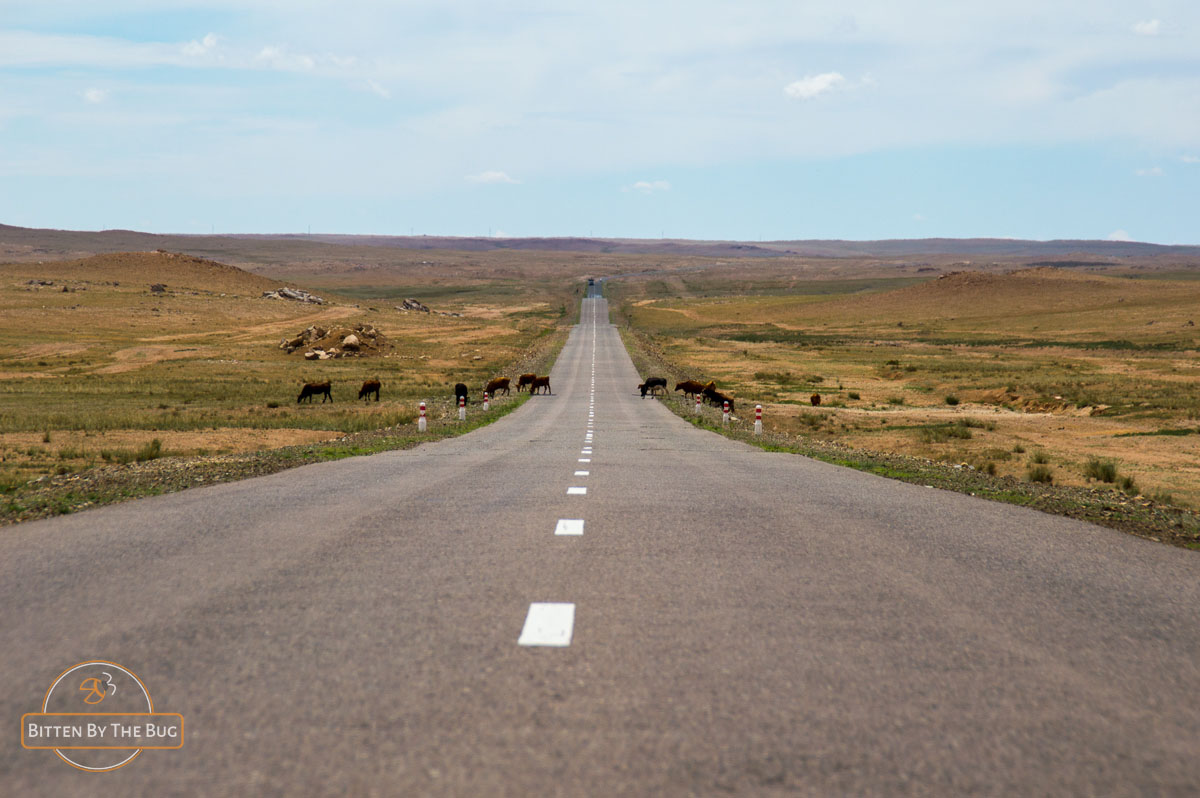 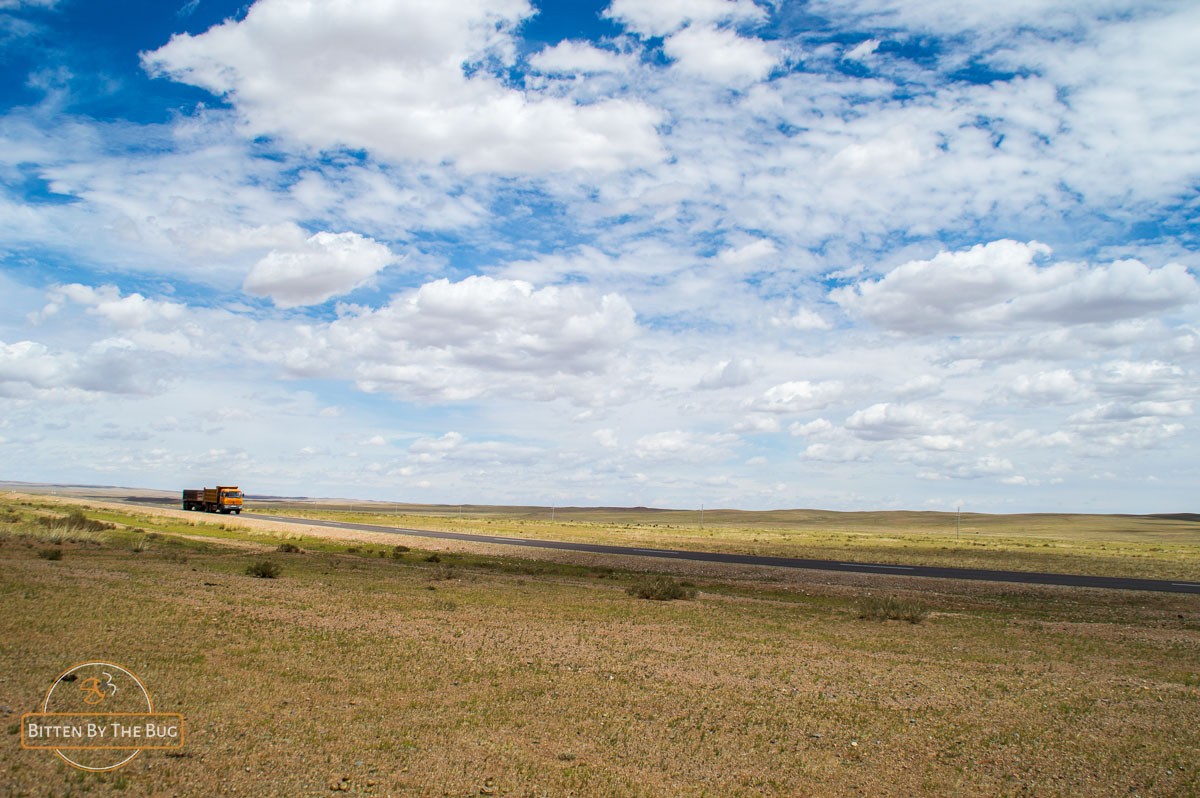 So far, the road had been really good to us, most of it had been asphalted. Occasionally, we had to go offroad because of holes in the road, but we would soon realise these little deviations are absolutely no reason to complain. There is no gravel road leading to the White Stupa, our destination for today, so the last few hours were spent bumping around and biting dust. We drove past the White Stupa, but didn't stop; we would come back later tonight, first we would go to our ger camp, to eat and drop our stuff. 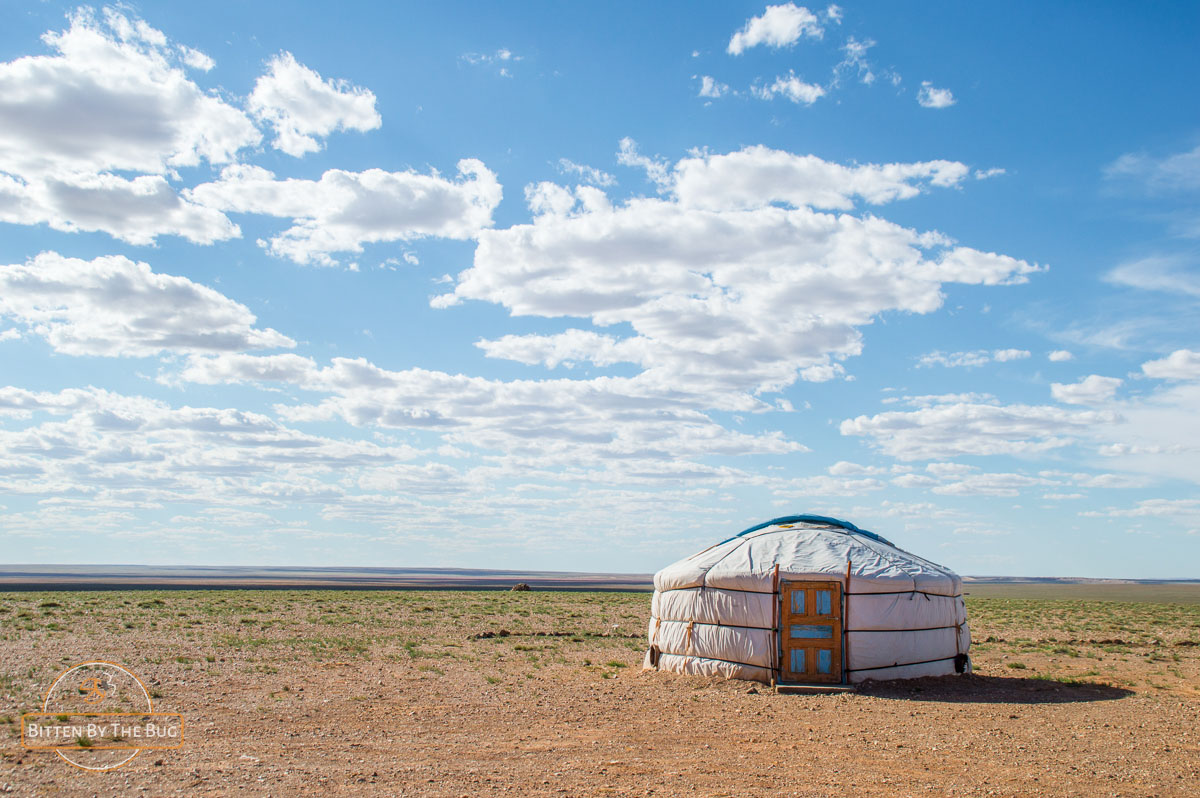 A ger is a round tent covered with skins or felt and used as a dwelling by nomads. Quite often large families are living in a ger together, which doesn't actually offer any privacy. The structure comprises an angled assembly or latticework of pieces of wood or bamboo for walls. Apparently, the two posts in the middle represent man and woman, and you cannot walk in between those two posts, since this brings bad luck. That's why a stove or table is often put in between.

While waiting for dinner, we did a photoshoot of the camels and the local family at the camp. Two little boys were trying to repair their bike while their mother had started preparing dinner for us. While waiting for dinner, Aurelien and I went for a walk around the camp. We didn't have to go far to feel overwhelmed by the vast landscape and made sure not to lose sight of the ger camp. This is the last place on earth where we wanted to get lost, everything just looks the same. 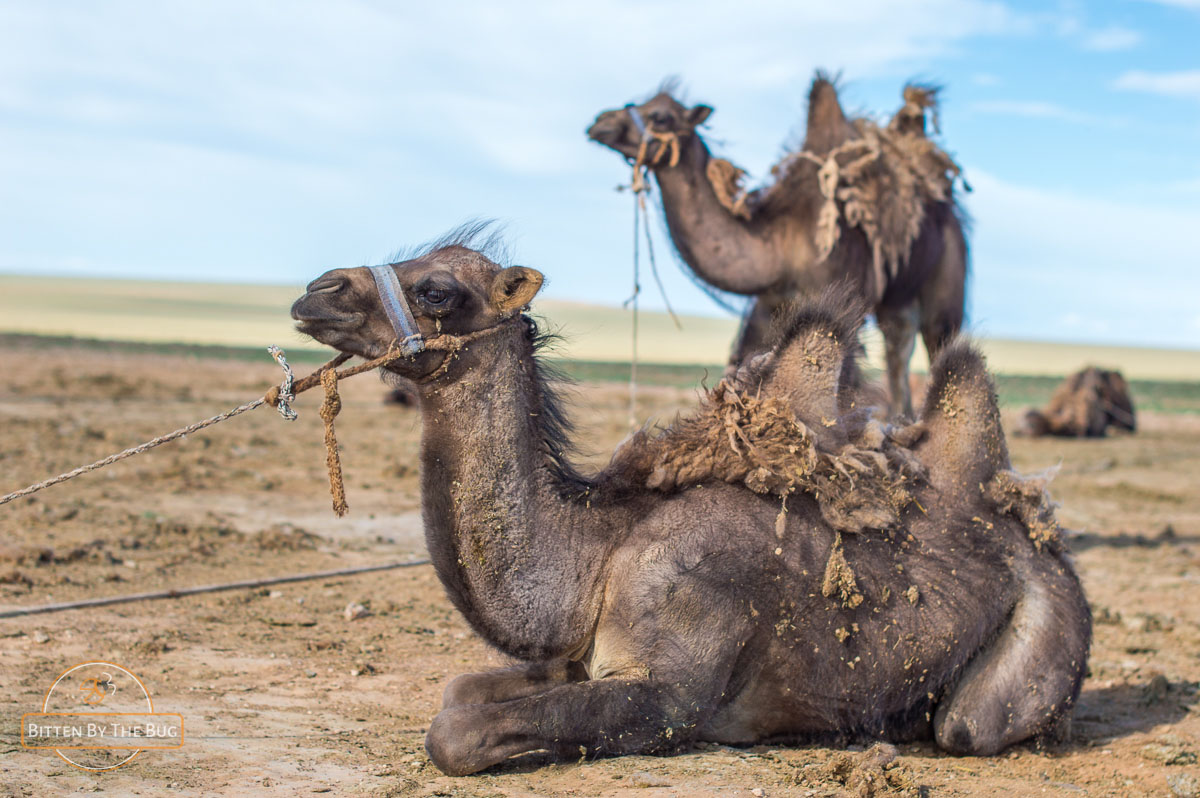 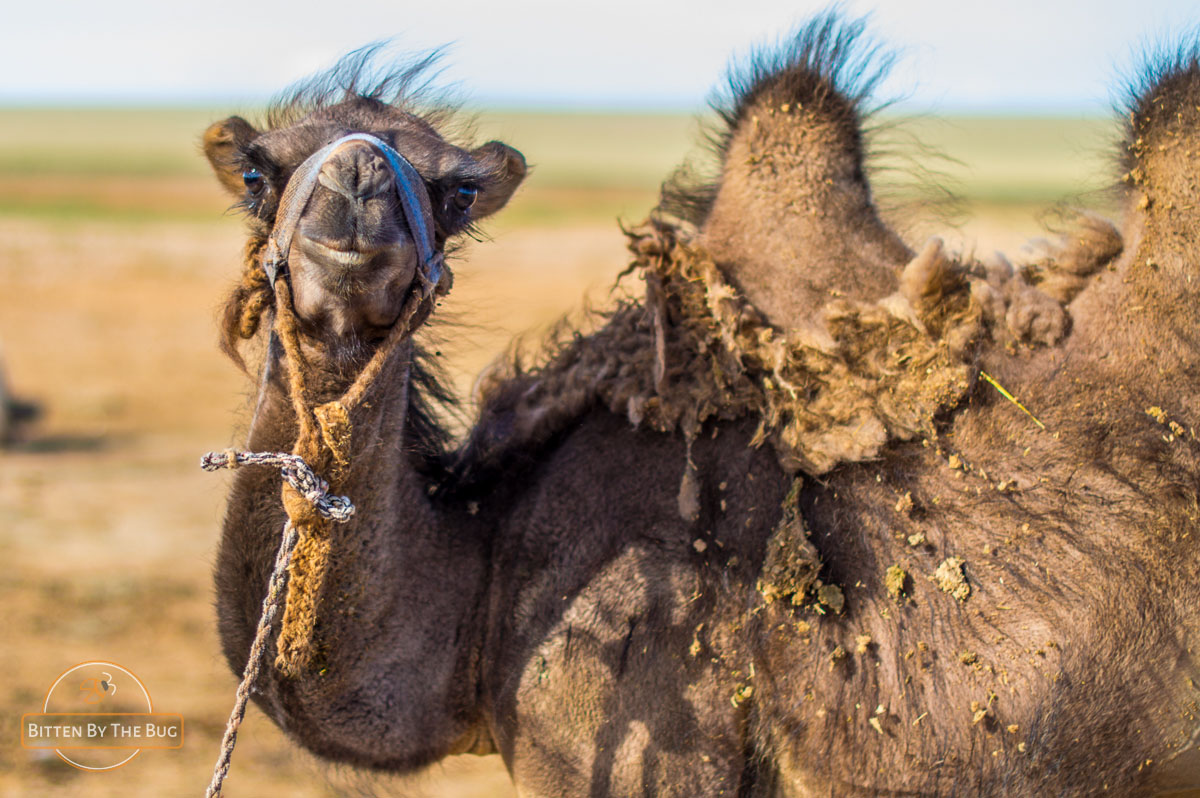 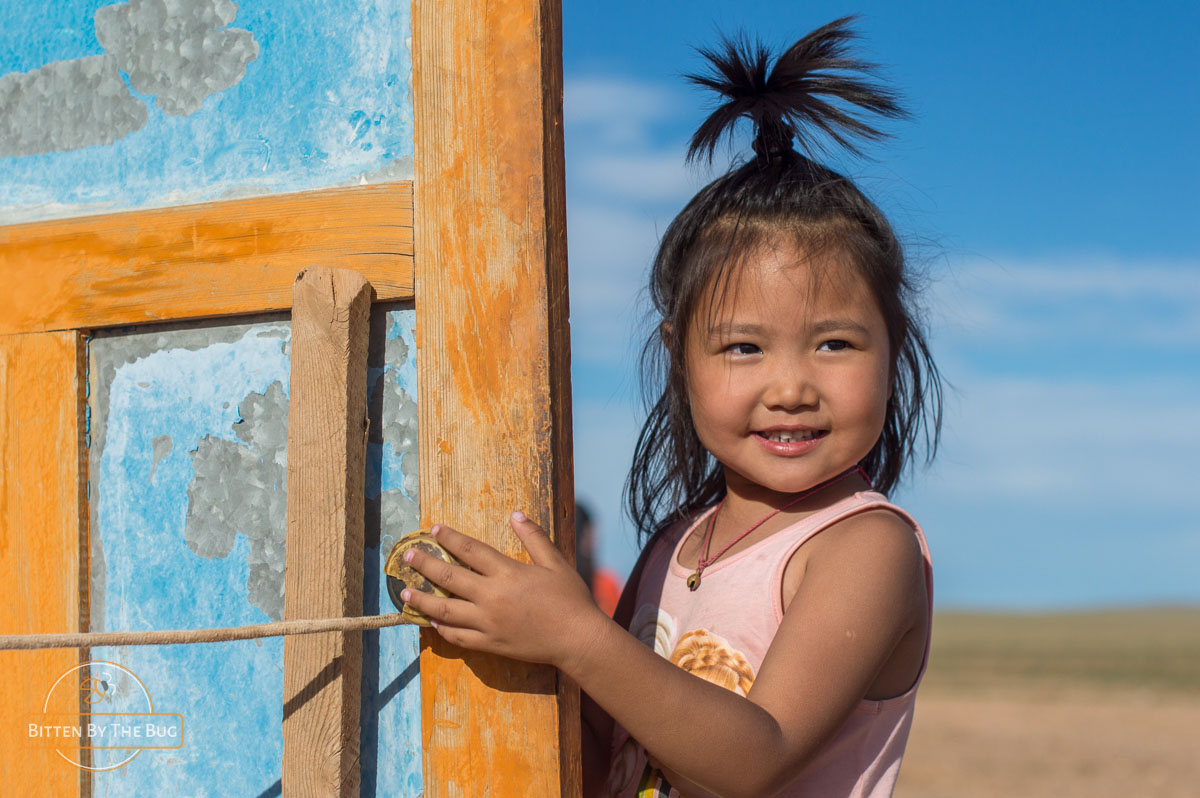 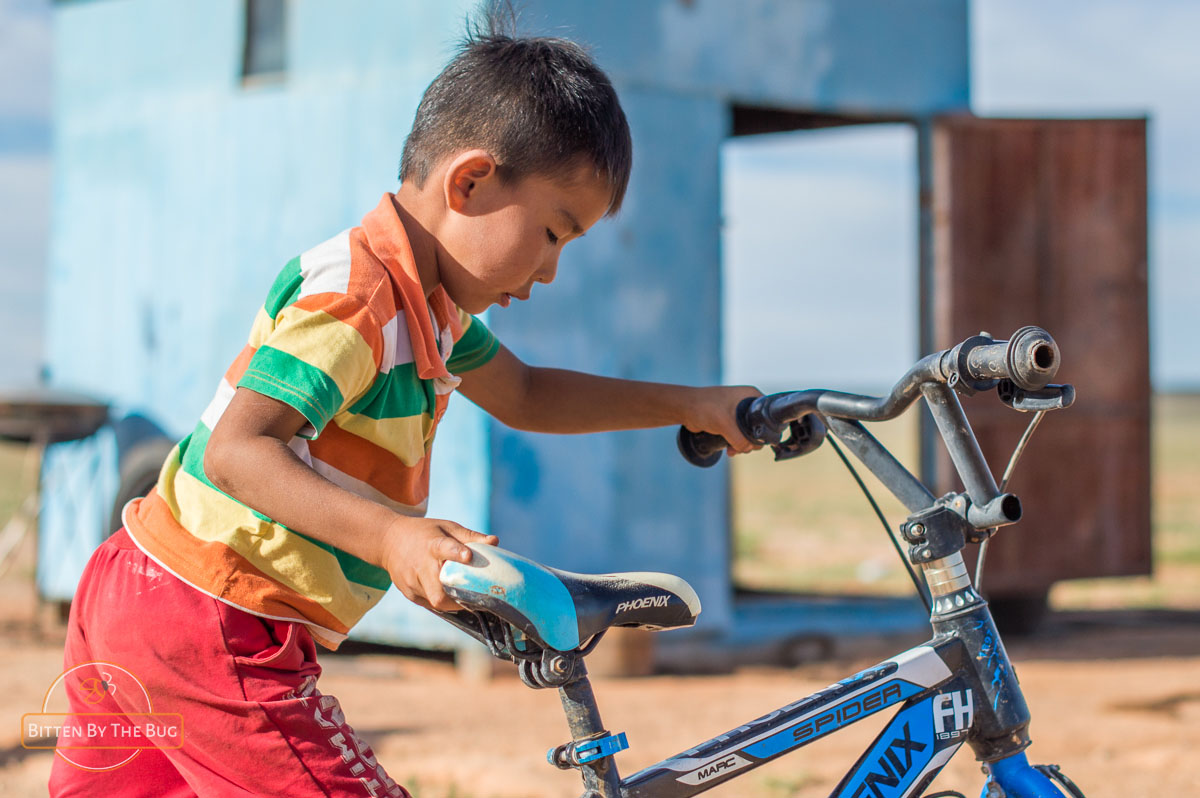 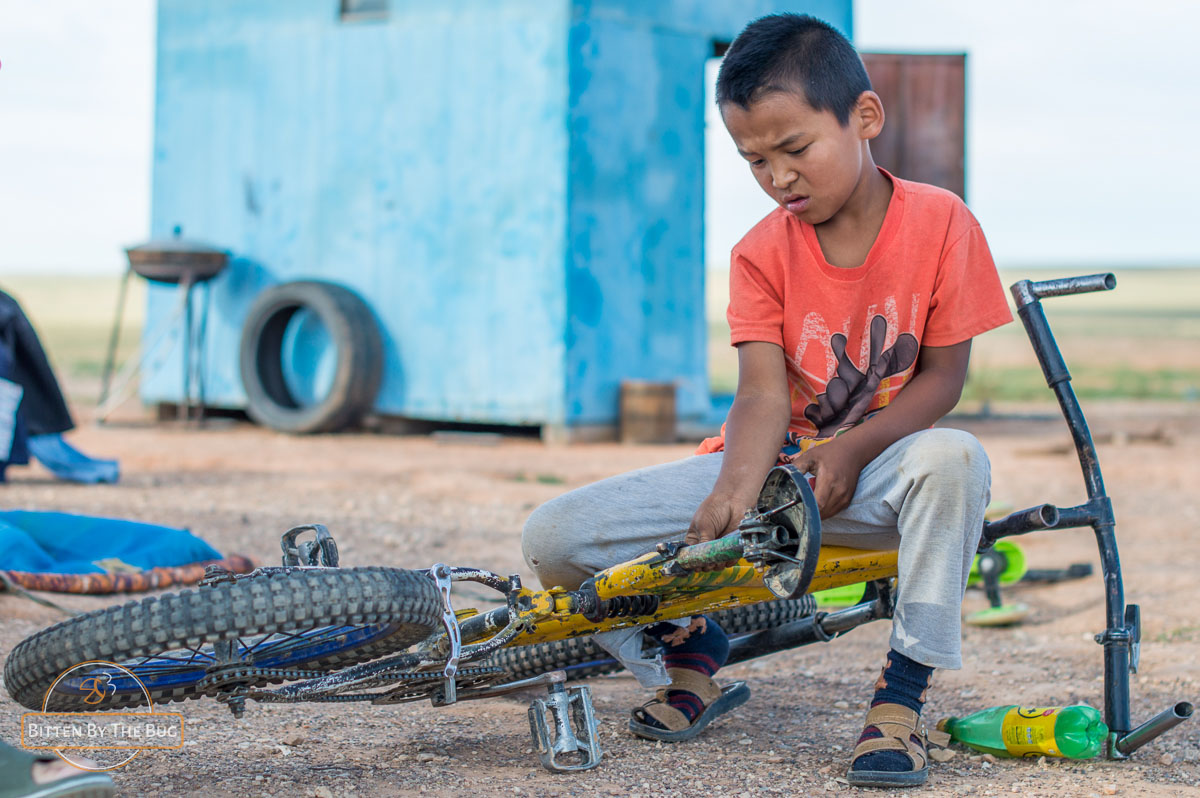 When we got back, khorkhog was ready. Khorkhog is some kind of Mongolian barbecue: they put a big pot on the fire, fill it with goat meat, some vegetables... and stones. Yep. The stones thrown in for the taste, as an alternative for spices and they made the meal very salty. Oh yeah... there's one other little detail: this pot is put on a stove, which is heated by burning up camel shit. Are you feeling hungry already? 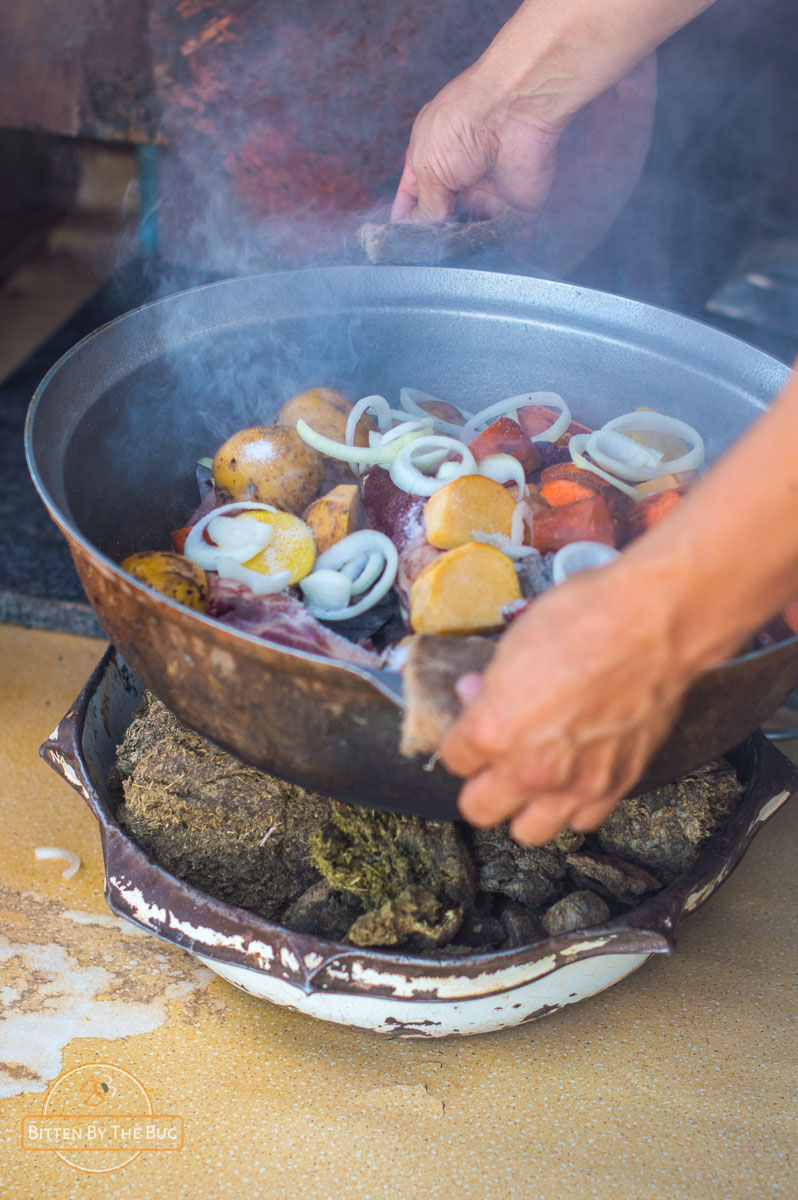 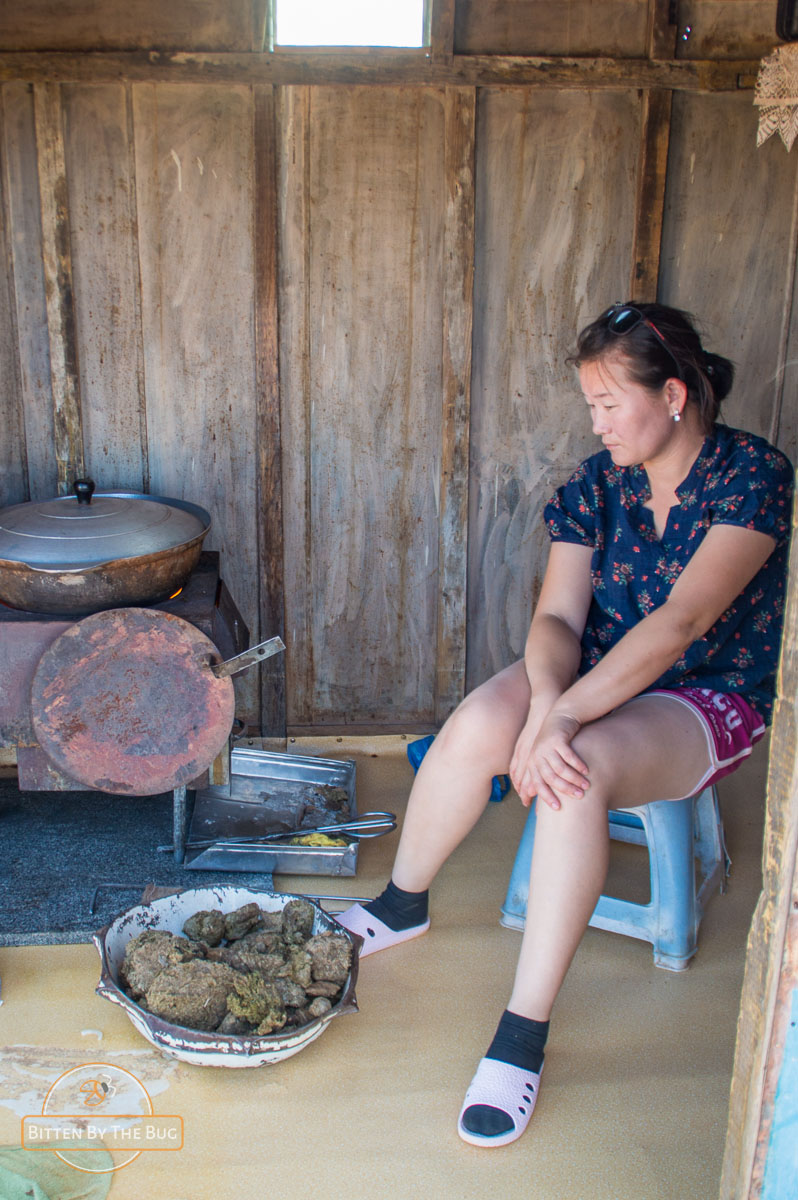 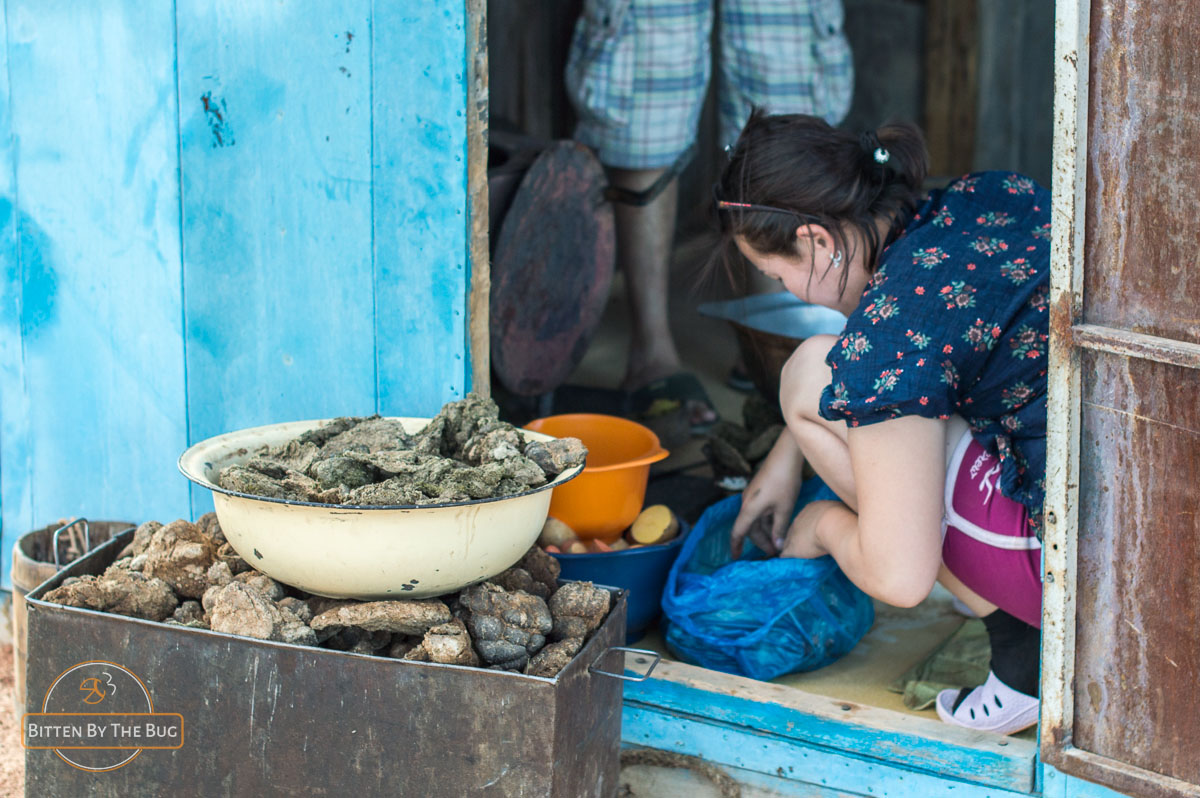 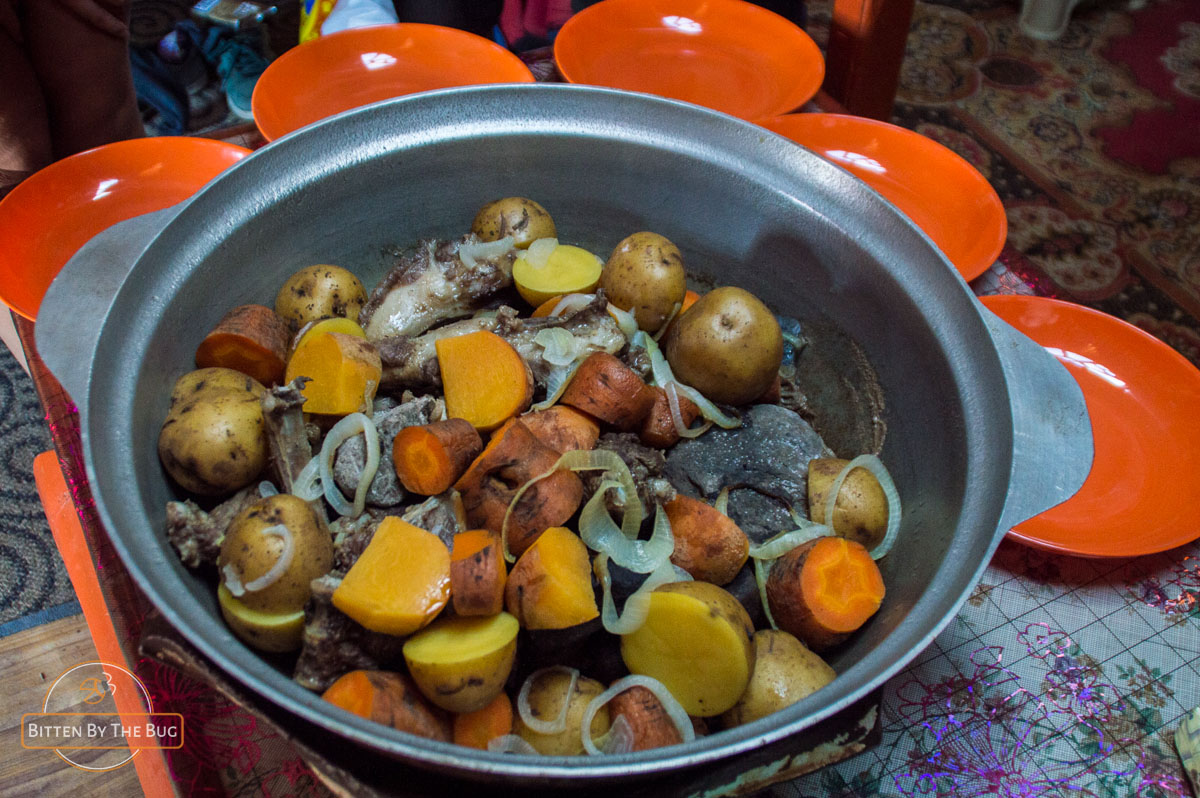 After dinner, we drove back to the White Stupa, in Mongolian known as Tsagaan Suvraga. Located in Ulziit soum of Dungovi province, at 400km from Ulaanbaatar, the White Stupa is a cliff of 30 meters high and 100 meters wide. The limestone rock has been eroded by water and wind and transformed into an interesting structure resembling the ruins from an ancient city. Its different colors represent different times in its formation history.

Having taken in the impressive view from the top, we climbed down to the valley. The sun was setting and the moon popped up behind the rocks.

Having photographed all the angles of the rock formation, we turned to selfies and group pictures. In the process I learnt there's one kind of picture you'd better not experiment with, and that is the jumping pose... It turns out the uneven terrain doesn't lend itself to that purpose. But I had to learn the hard way, so I ended up with a sprained wrist and a beautiful (read: dusty and way too hot) bandage. I do not recommend. 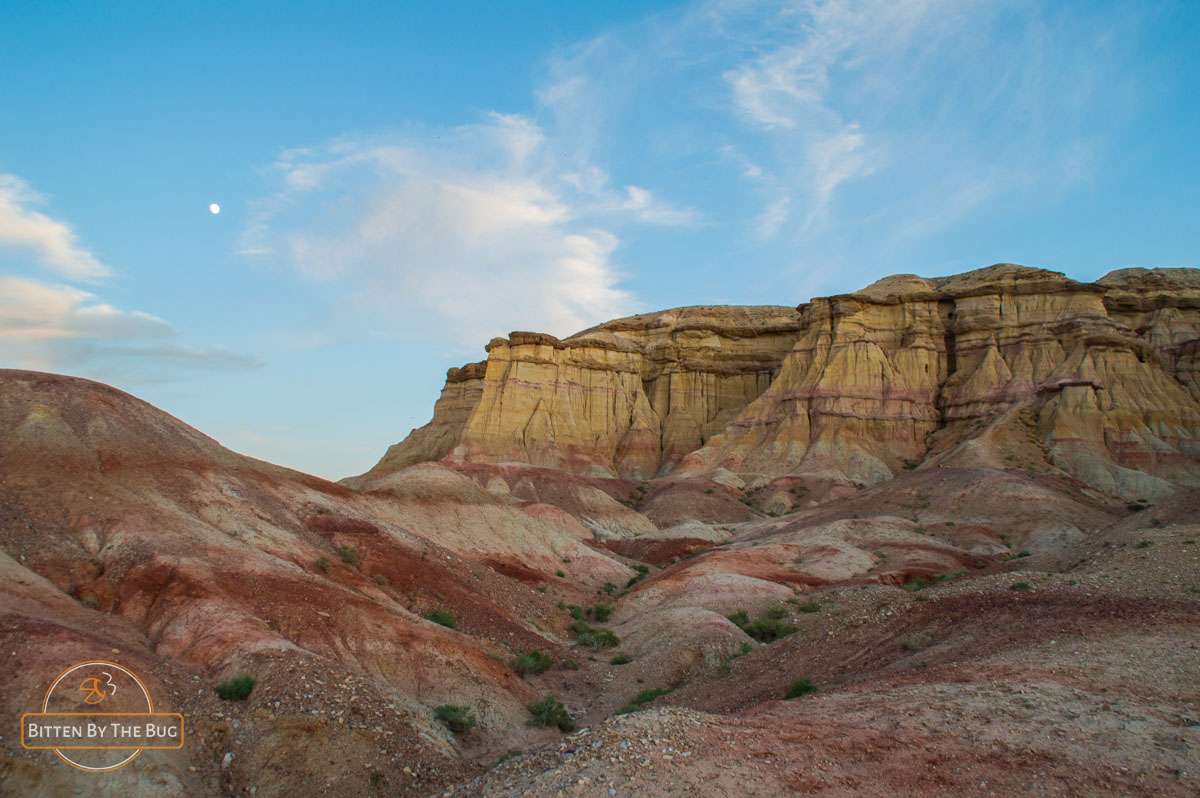 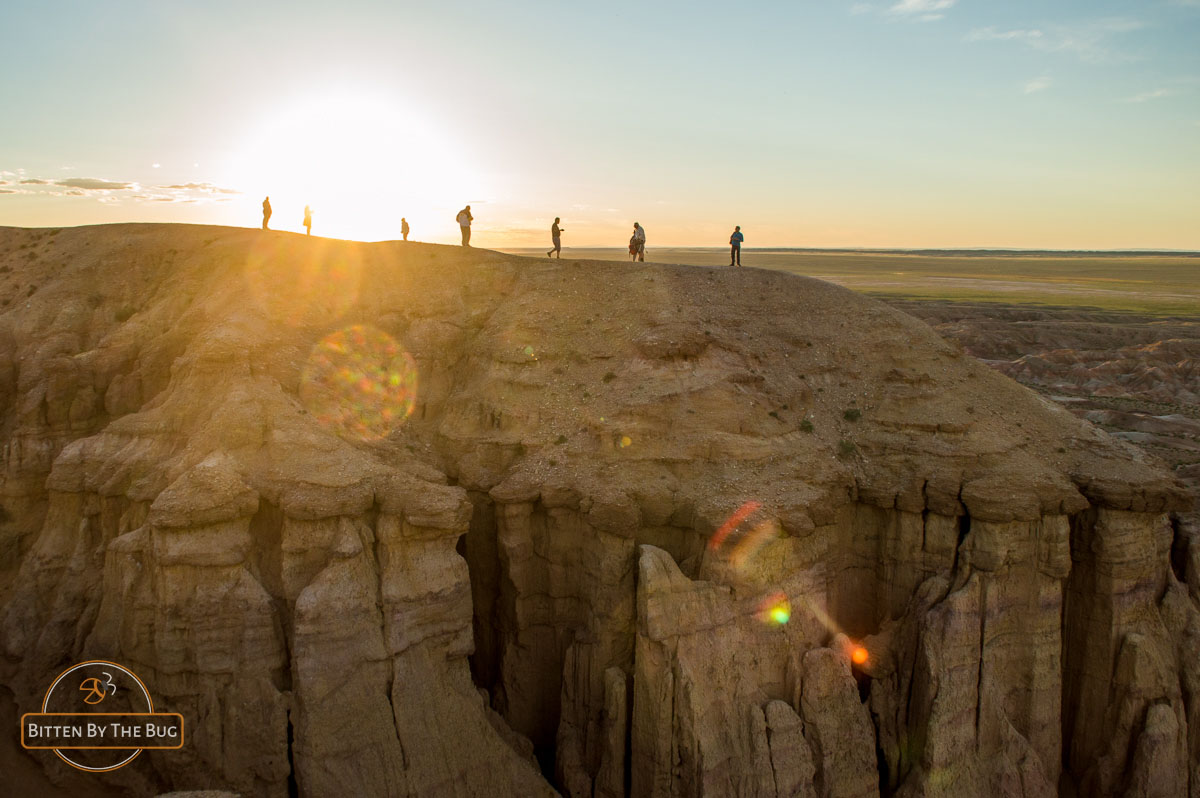 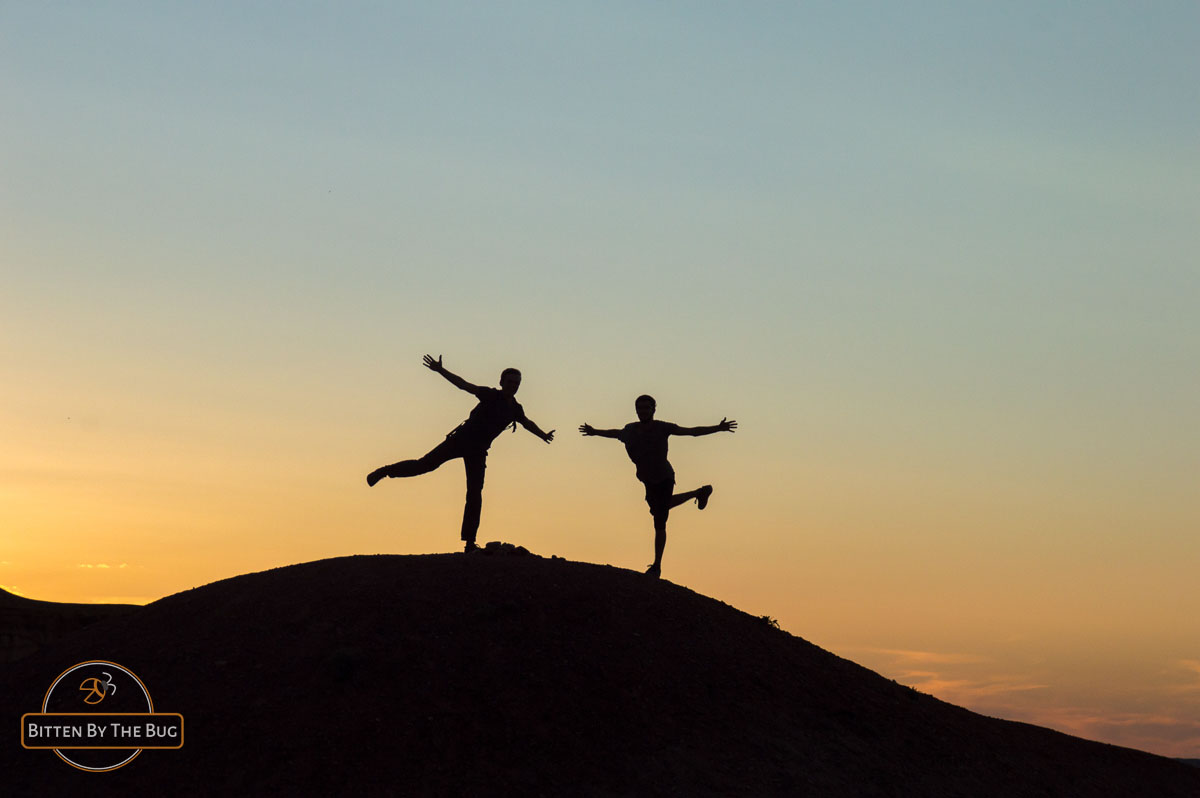 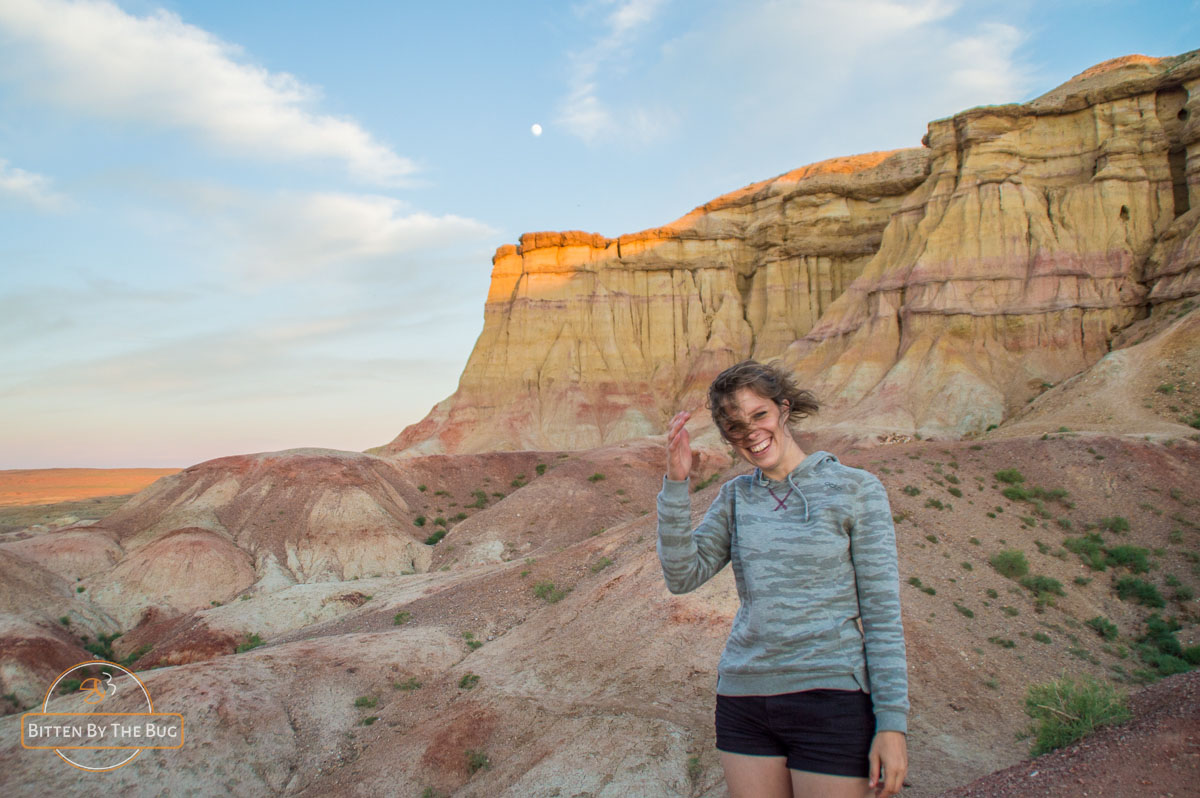 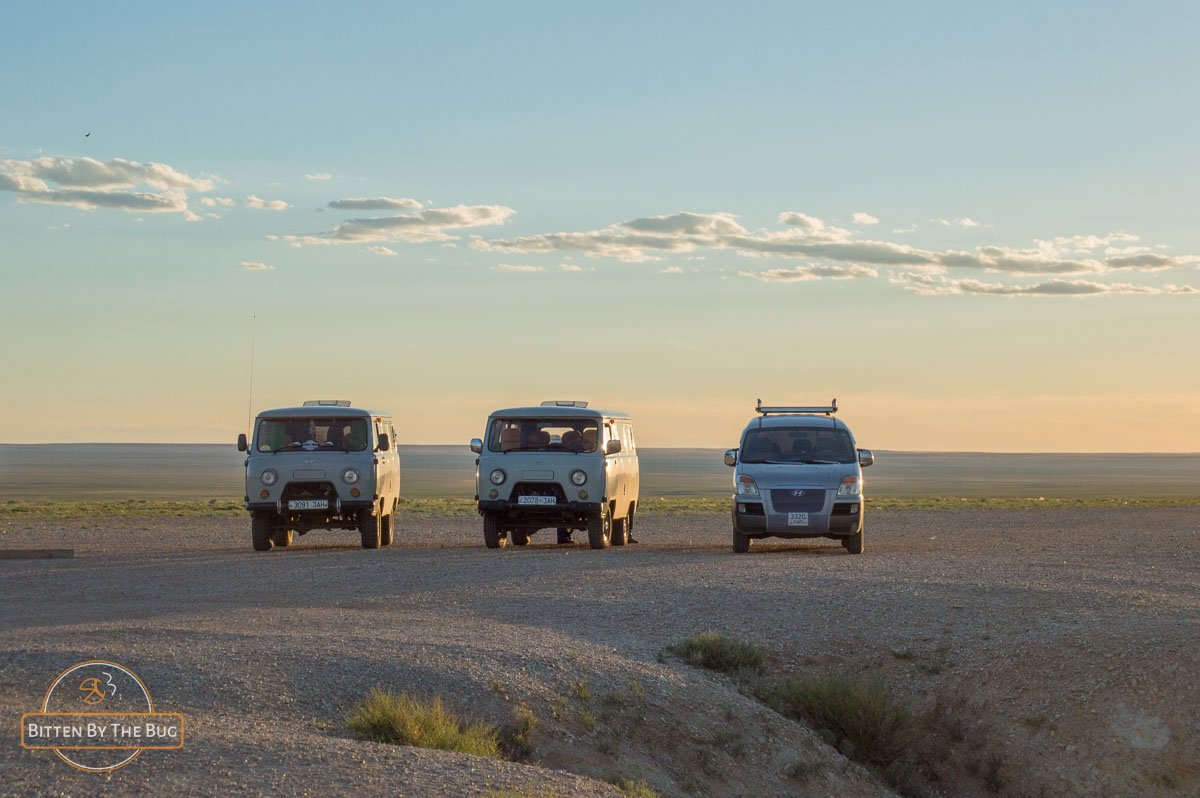 When the sun had entirely set, we went back to the ger. Our guide wished us goodnight with one last word of advice: be sure to check in and under your bed for snakes. Well... that's reassuring. 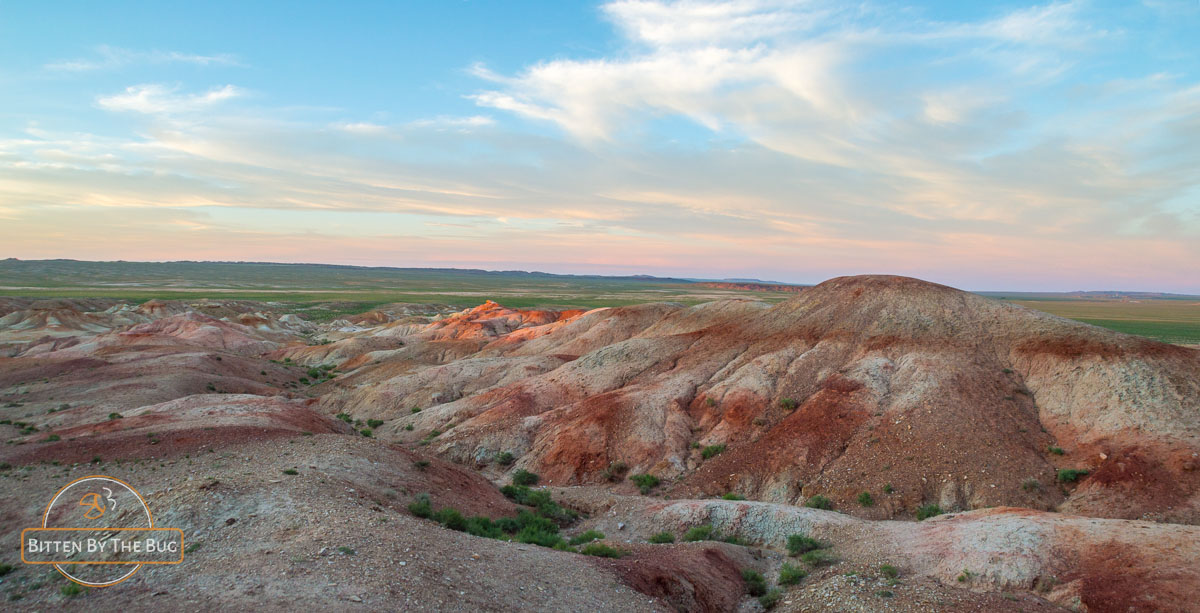 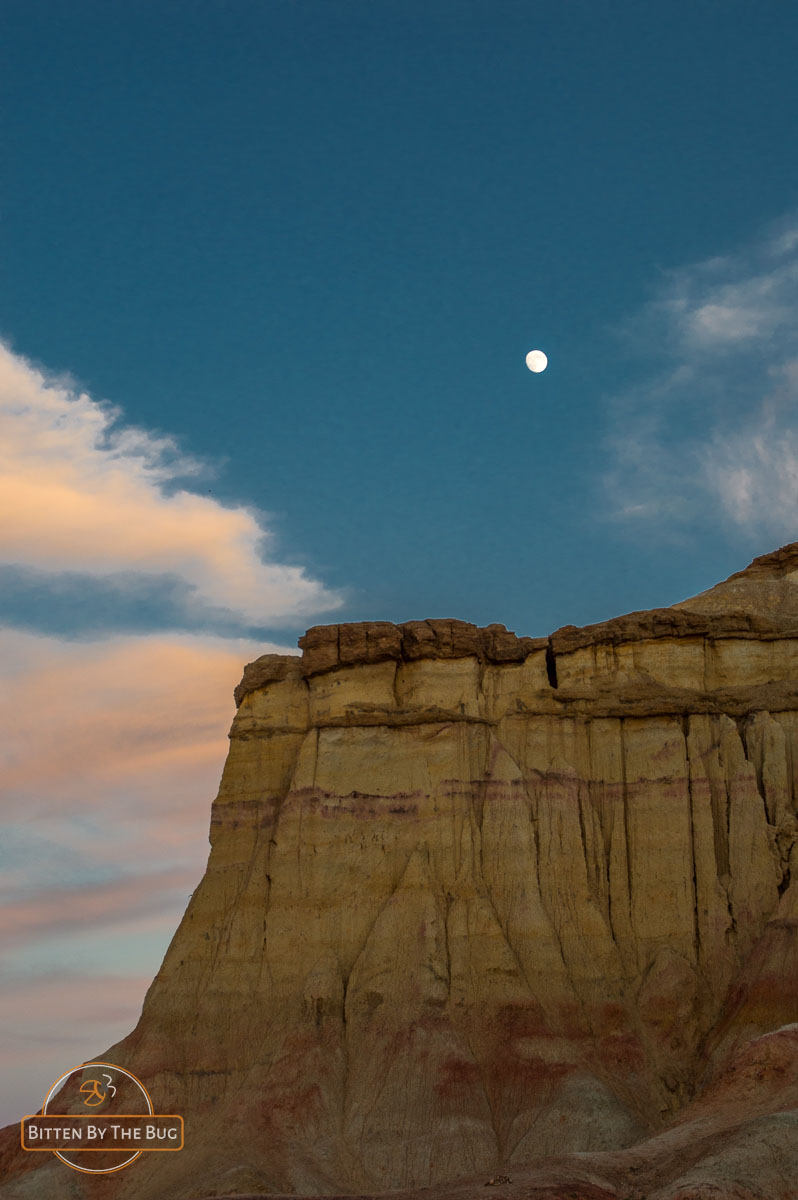 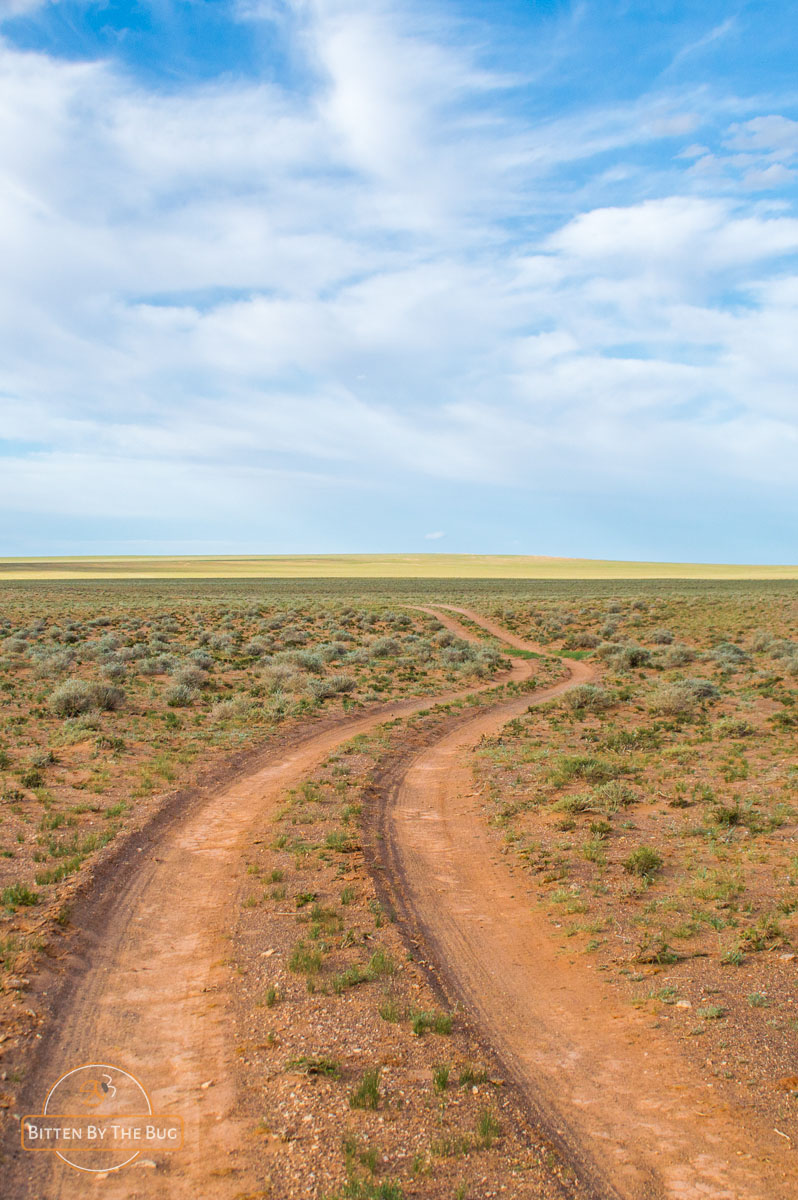 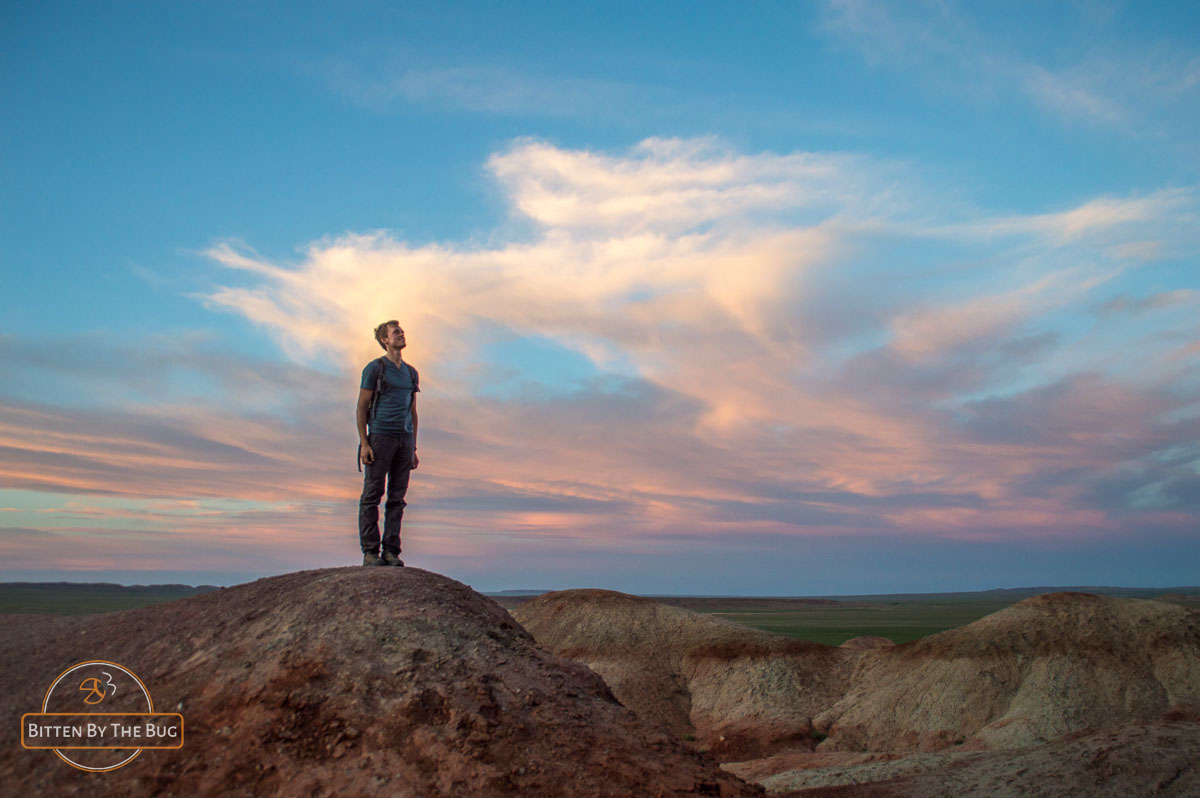 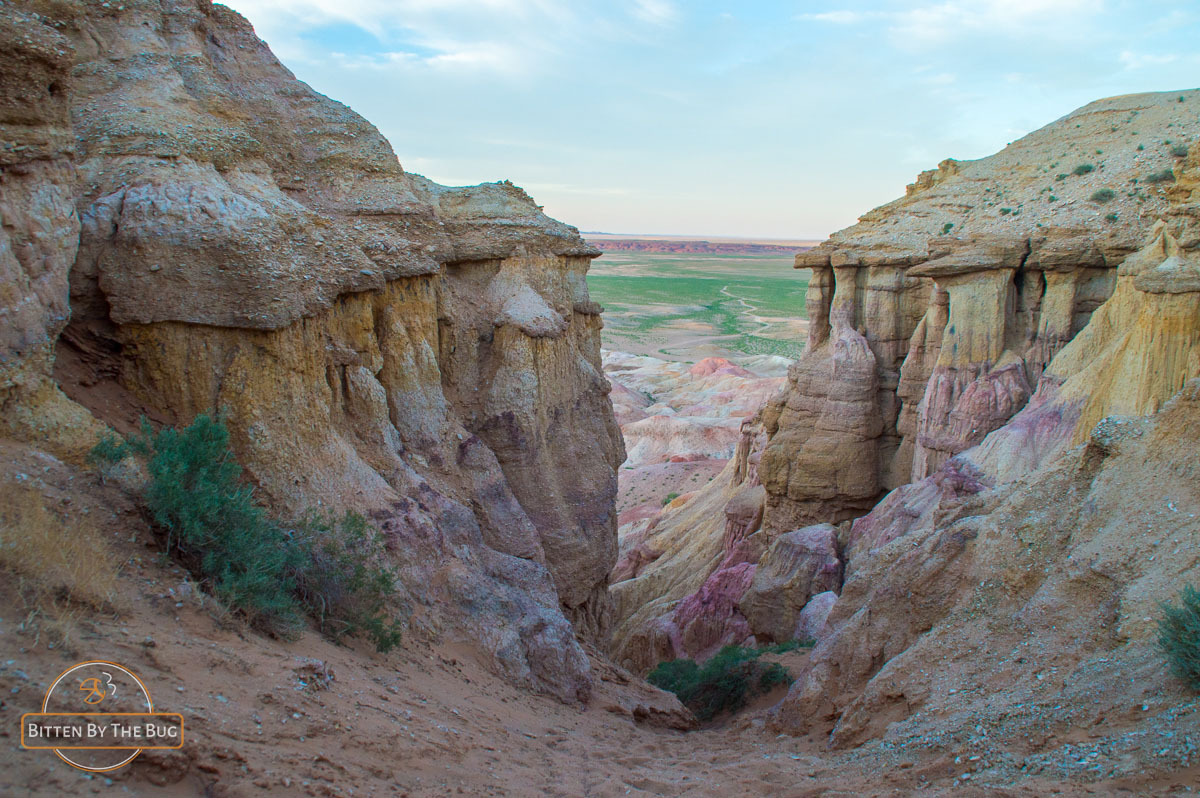 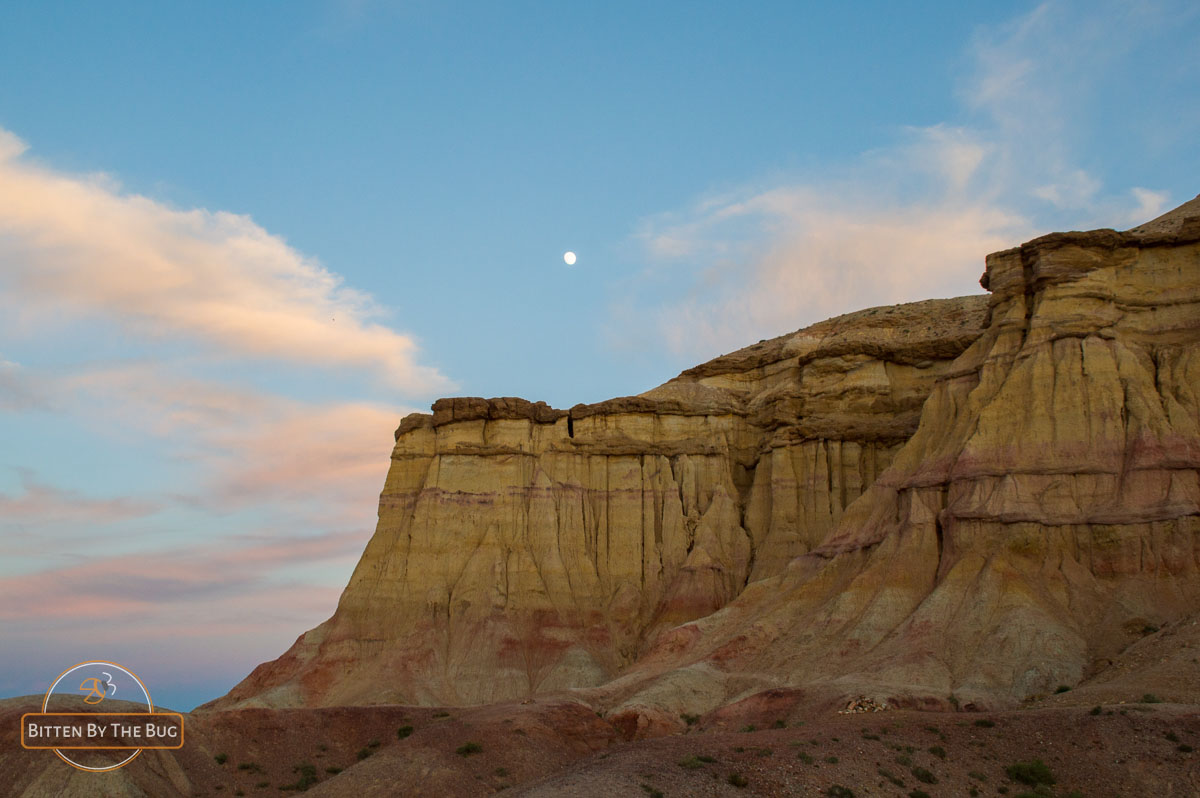