Every year by the end of Spring, Mons hosts a big folkloric festival called the ‘Ducasse de Mons’, also known as the ‘Doudou festival’. Recognized by UNESCO, this event is of huge importance to the inhabitants, but curious visitors also flock in large numbers to Mons in order to take part in the festivities. As usual there are concerts, fairs, processions, lots of beer… but the main highlight is without a doubt the fight of Saint George against the dragon! 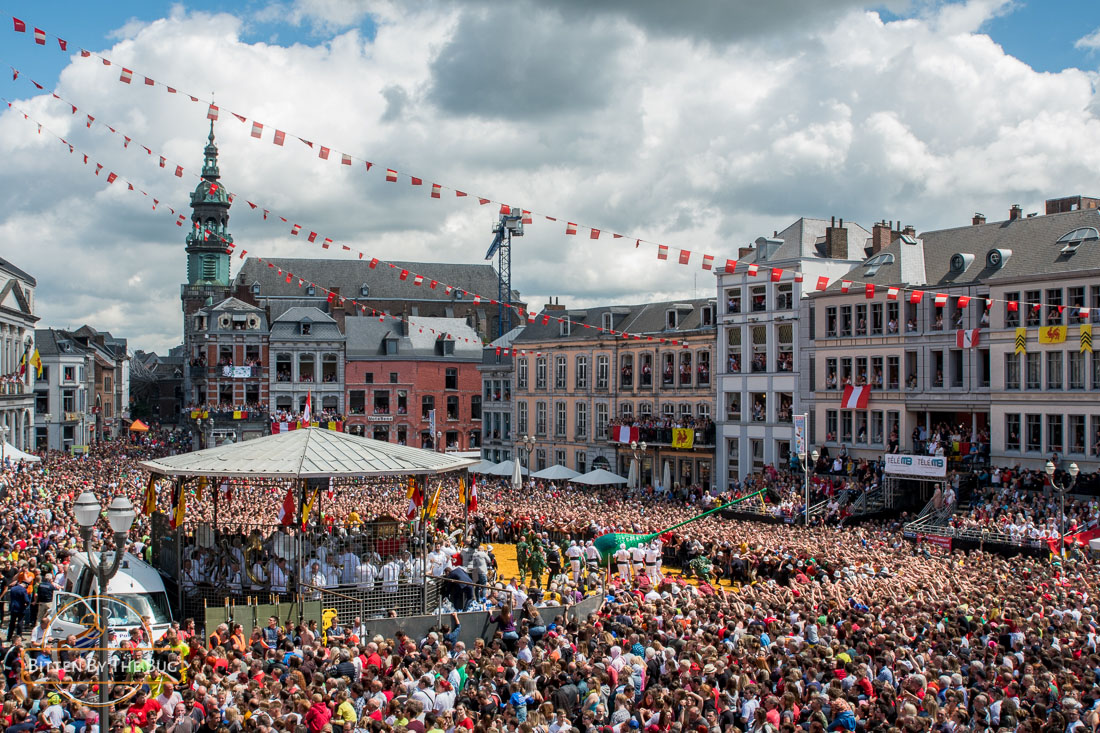 What is the Doudou festival about?

The Doudou festival in Mons refers to a series of festivities that last for almost two weeks, although not continuously. The major events happen in the Trinity weekend and are marked by four key moments.

1. The descent of the shrine

During a religious ceremony on Saturday evening, the shrine of Saint Waltrude is taken down and placed on the car d’or, a gilded cart. The cart is accompanied by spectacular organ, trumpet and timbal music, as well as enchanting choral songs. To mark their involvement, everyone touches the shrine at the end of the ceremony, before leaving the church.

On the morning of Trinity Sunday, the cart with the shrine of Saint Waltrude is drawn through the city streets by strong draft horses, preceded by a large procession made up of about 5.000 participants divided over 60 groups. Many of them wear traditional costumes and represent the guilds, brotherhoods, magistrates, clergymen and other inhabitants that mark the history of the region since the Middle Ages. Several religious relics and statues are paraded as well, while many brass bands provide music. 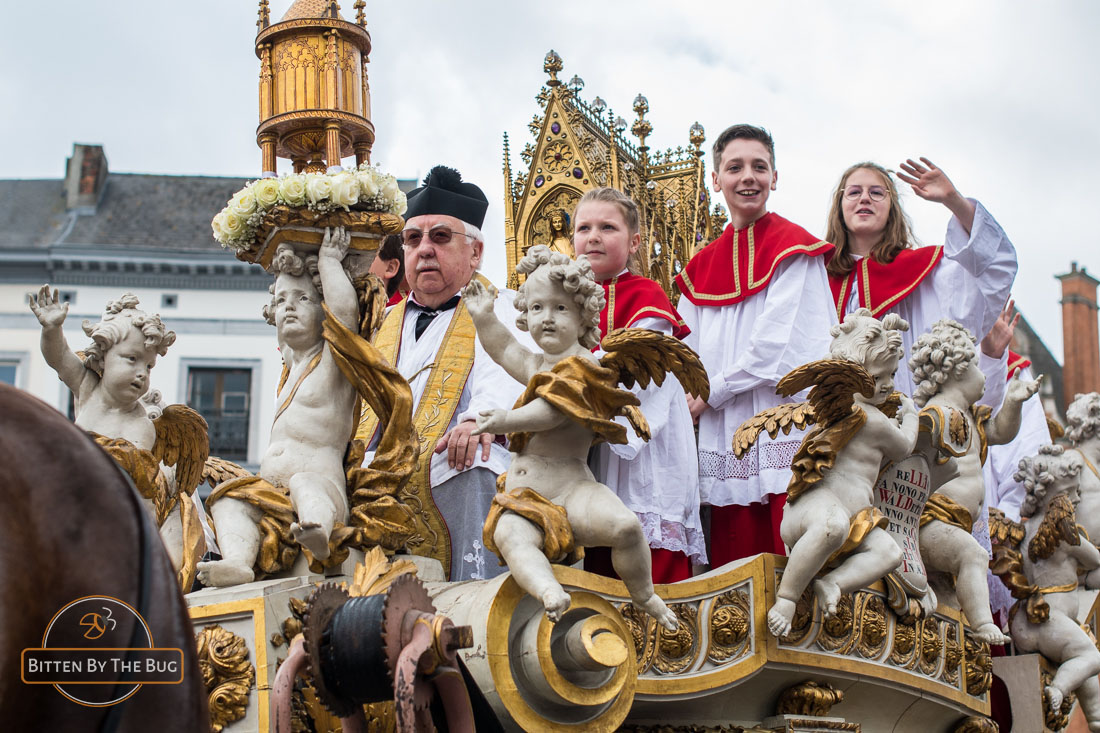 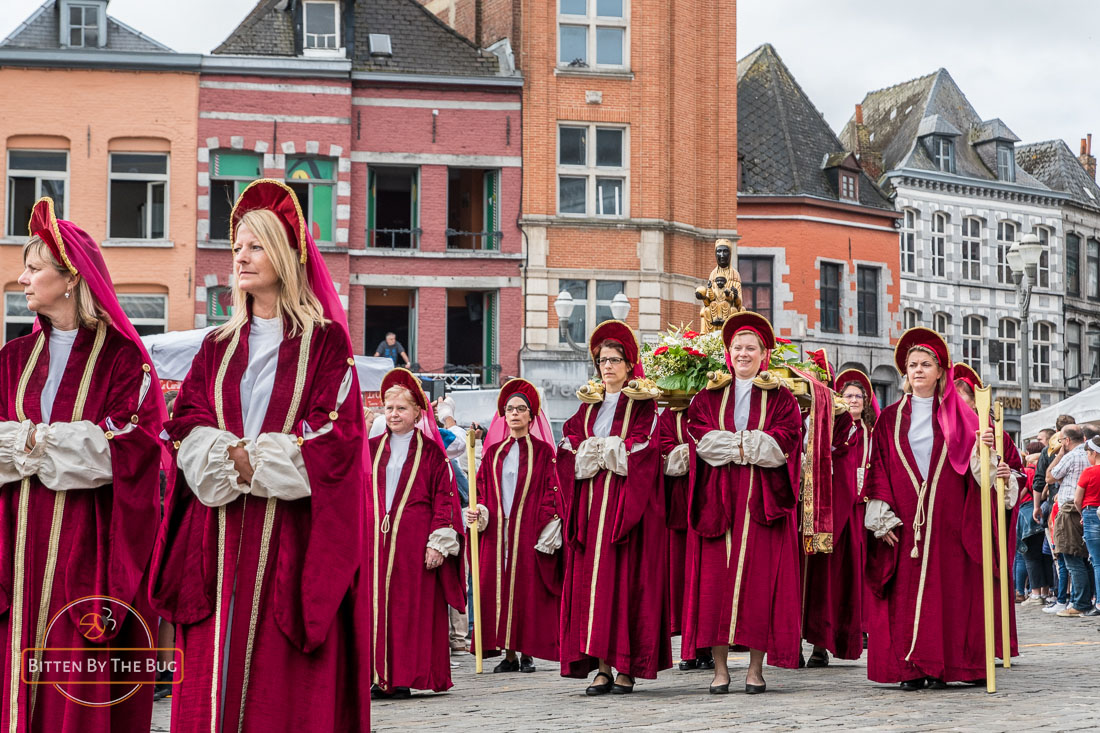 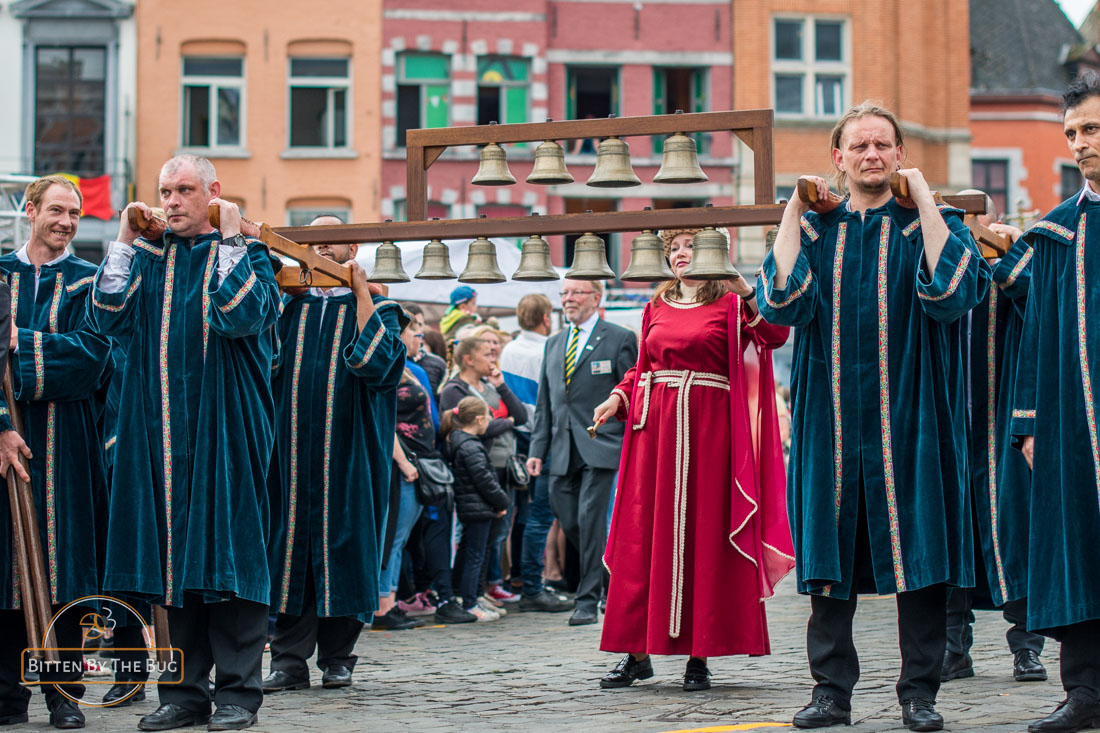 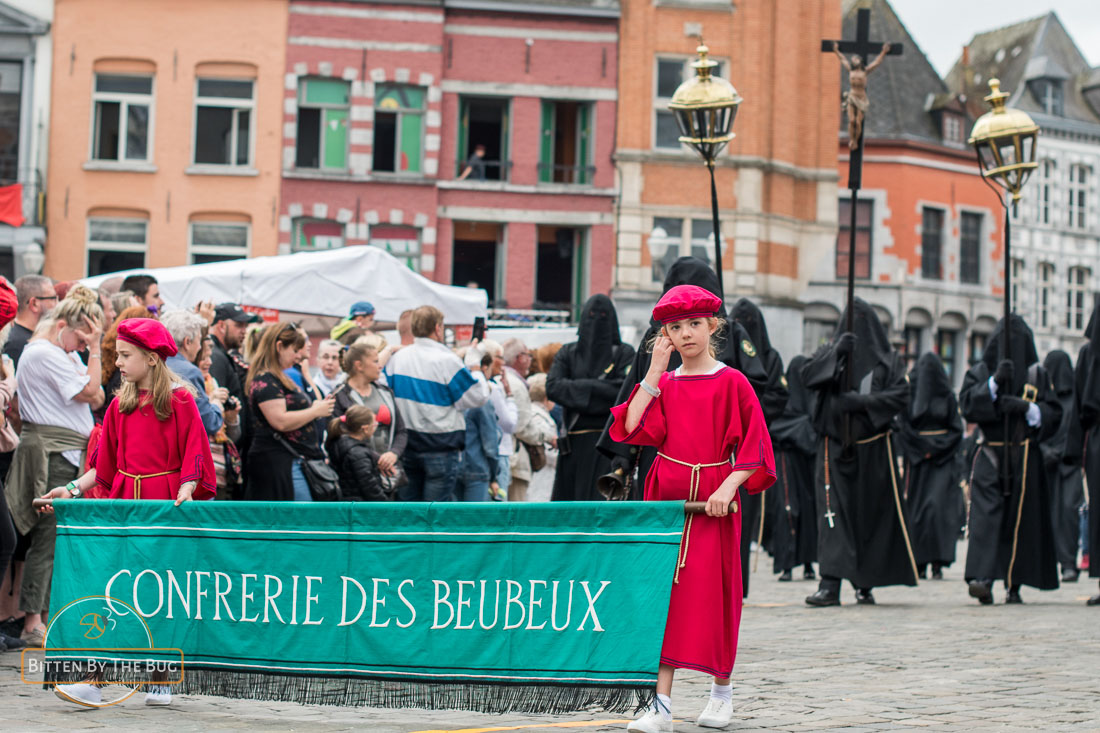 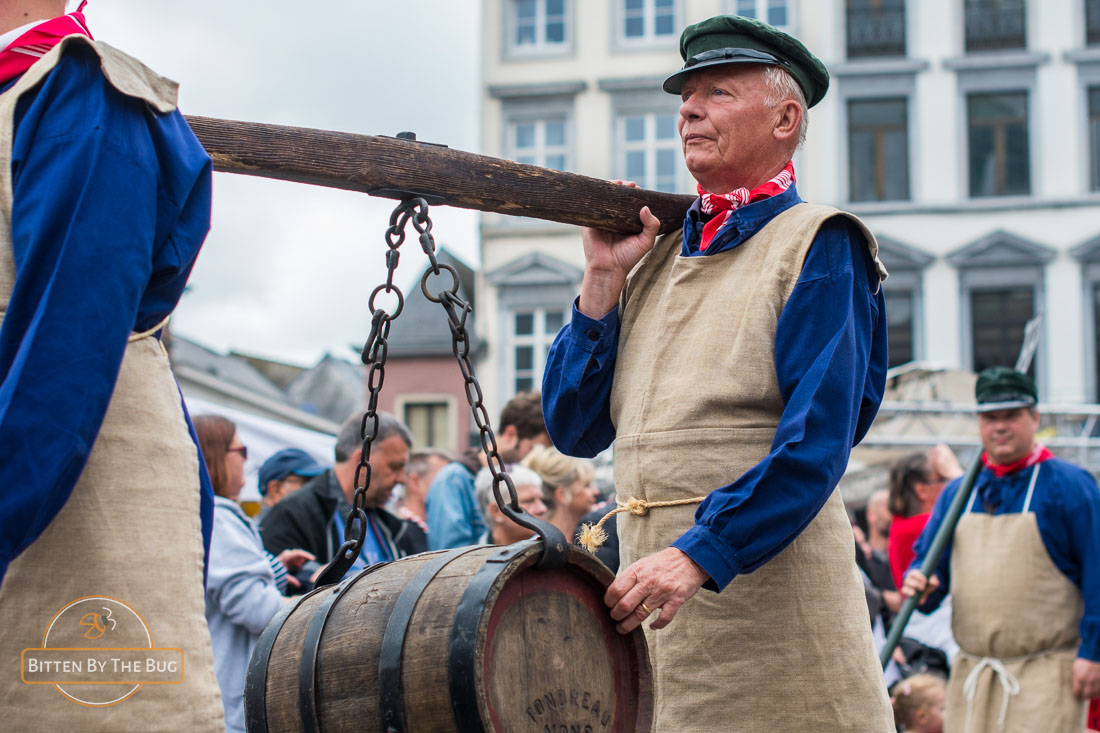 3. The final ascent of the Car d’Or

At the end of the procession, the Car d’Or has to climb a steep cobblestone street called Rampe Sainte-Waudru. To help the horses with the immense weight, hundreds of people gather behind to push. According to local superstition, the Car d’Or has to reach the top of the hill in one go, or the city will suffer great misfortune in the year to come. Luckily for Mons, the cart swiftly made it to the hilltop. 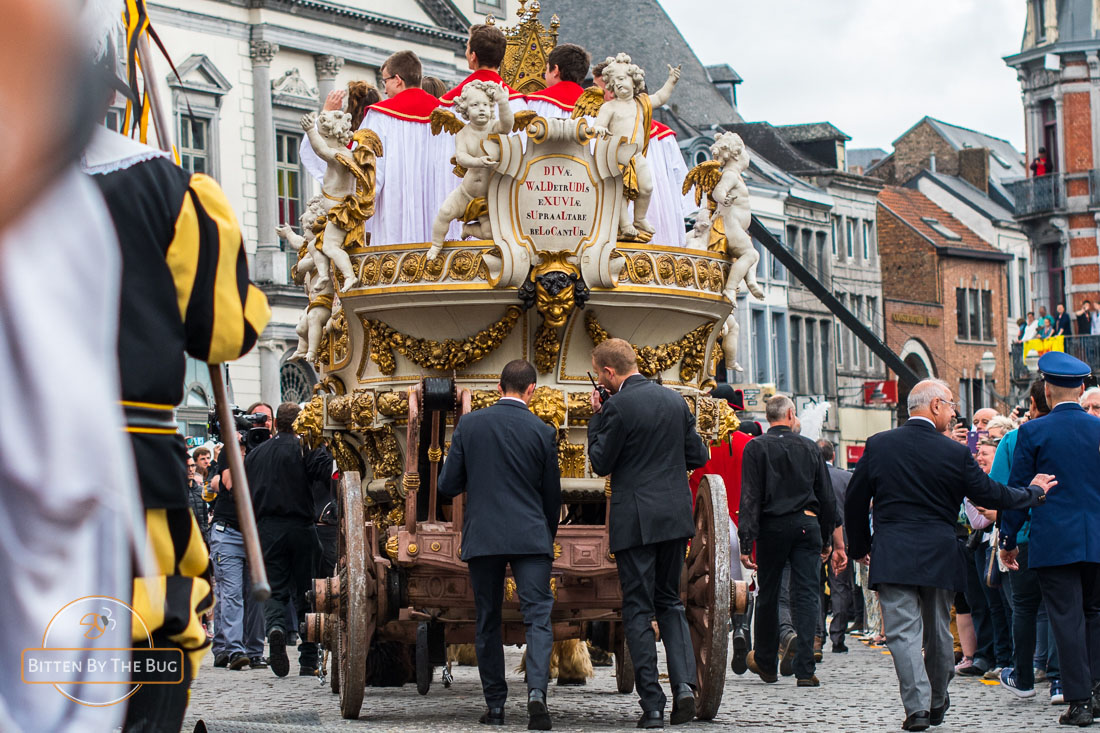 4. The fight of Saint George, also known as ‘the Lumeçon’

At 12h30, just when the shrine has safely returned to the church, people gather on the Grand Place for the most spectacular event of the Ducasse de Mons. Saint George is about to fight the dragon! This event, referred to as Lumeçon, represents the fight between good and evil.

The dragon is about 10 meters in length, most of it being a long solid tail with horse hairs at the tip. With this tail, he tries to attack Saint George, thereby assaulting the public as well. The people are involved in the combat as they grab the dragon’s tail and try to pluck off some hairs. They keep them as trophies, as it is believed they bring luck and grant them the right to make a wish. Although we didn’t participate in the combat ourselves, we received a hair from someone braver than us, so now we’re proudly wearing a horse hair around our wrists :-) 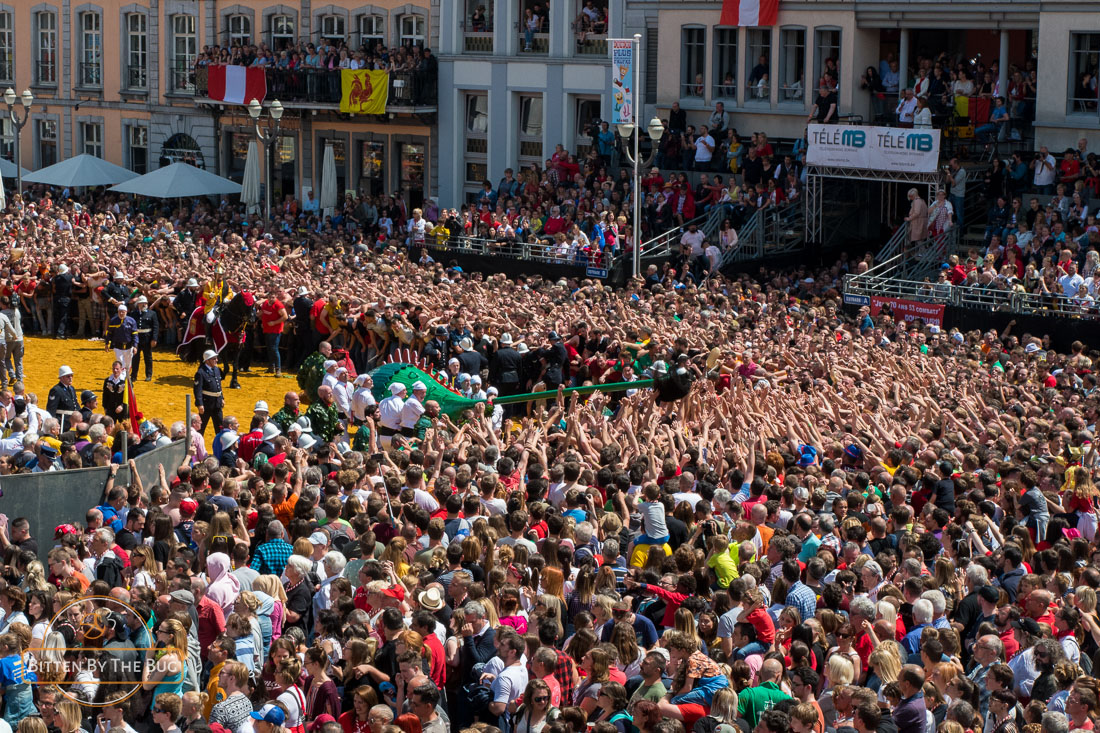 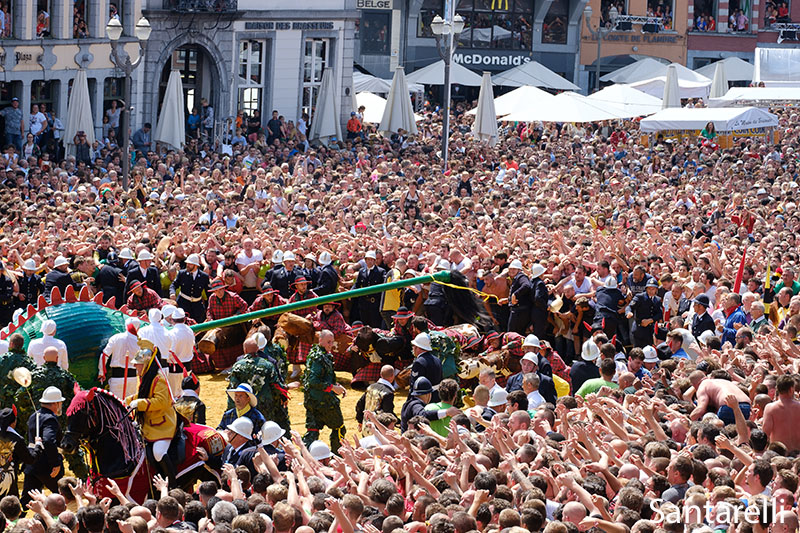 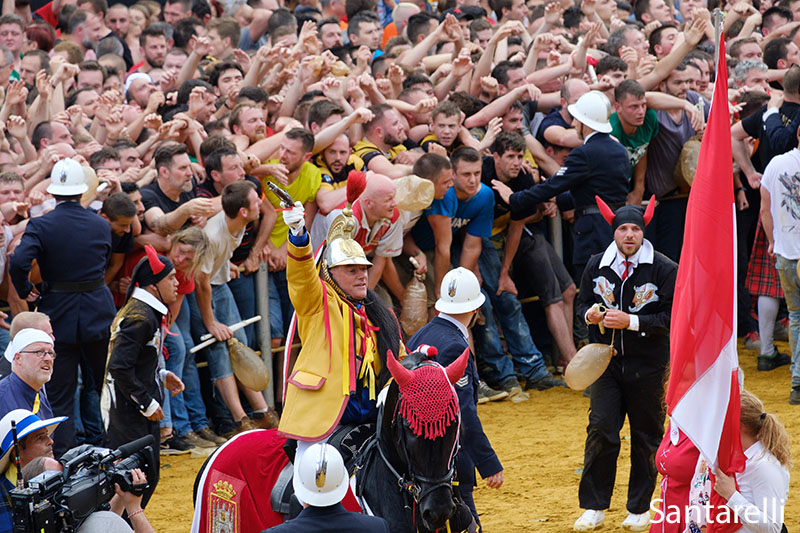 Other characters taking part in this combat are 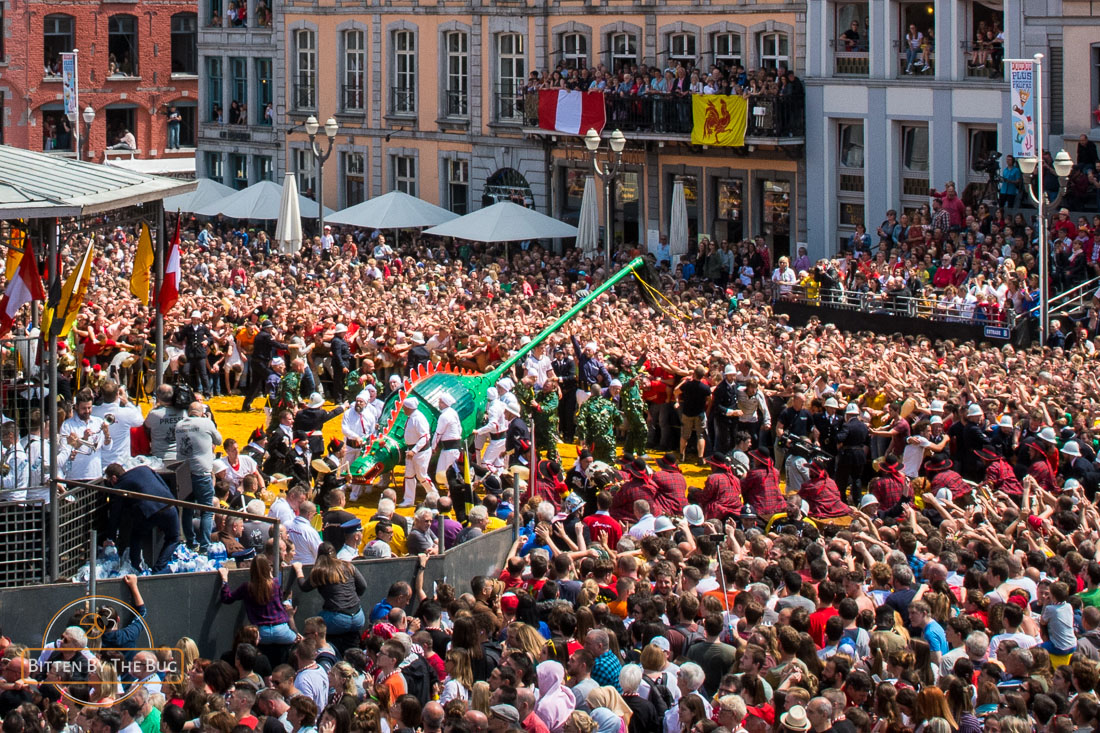 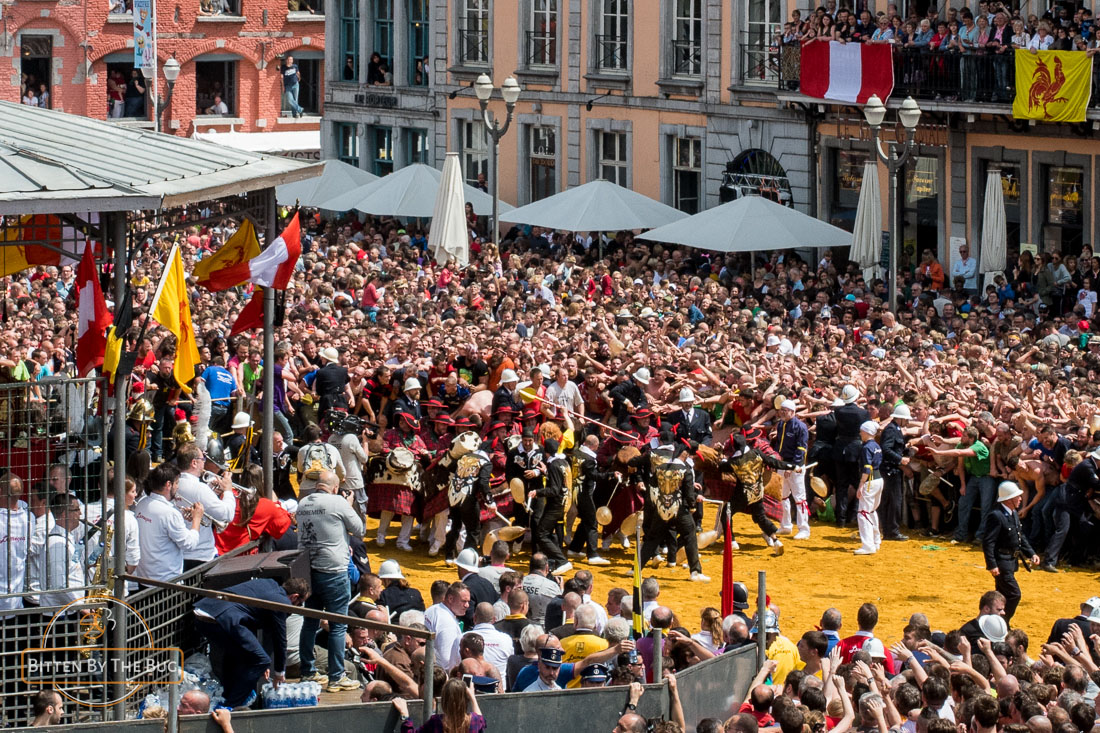 During a precisely choreographed combat which lasts about 30 minutes, Saint George engages in a battle against the dragon. Unfortunately, his saber is ineffective and his lance breaks every time he hits the dragon’s skin. Eventually, he manages to kill the dragon with a few shots of his pistol, given to him by Poliade. 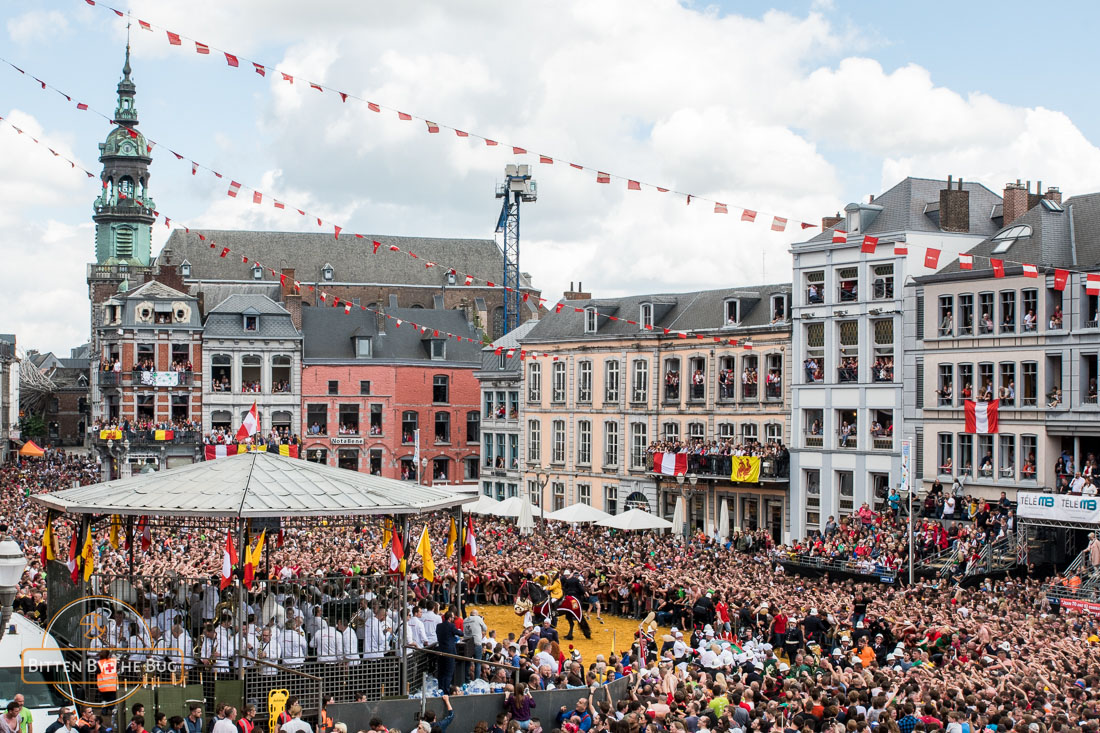 A brass band plays rhythmic music all along, while the crowds cheer and sing along at the top of their voices. There is even a Doudou hymn, which every inhabitant of Mons knows by heart. All of this creates a compelling vibe which is impossible to put in words or capture with photos. You’ll have to visit the Ducasse of Mons to experience it yourself!

The square fills up quickly for the Lumeçon, so be there on time if you want a good spot. If you stand around ‘the ring’ (it’s actually a square), you can participate in the fight against the dragon and reach for his tail hairs. Beware that it gets quite intense and people will be pushing a lot. If you prefer a more quiet spot, keep a safe distance from the arena and watch the battle on the giant screen. Don’t worry if you don’t get to see the dragon up close. You’ll have the opportunity to meet him after the fight, when he does a few rounds around the city center. 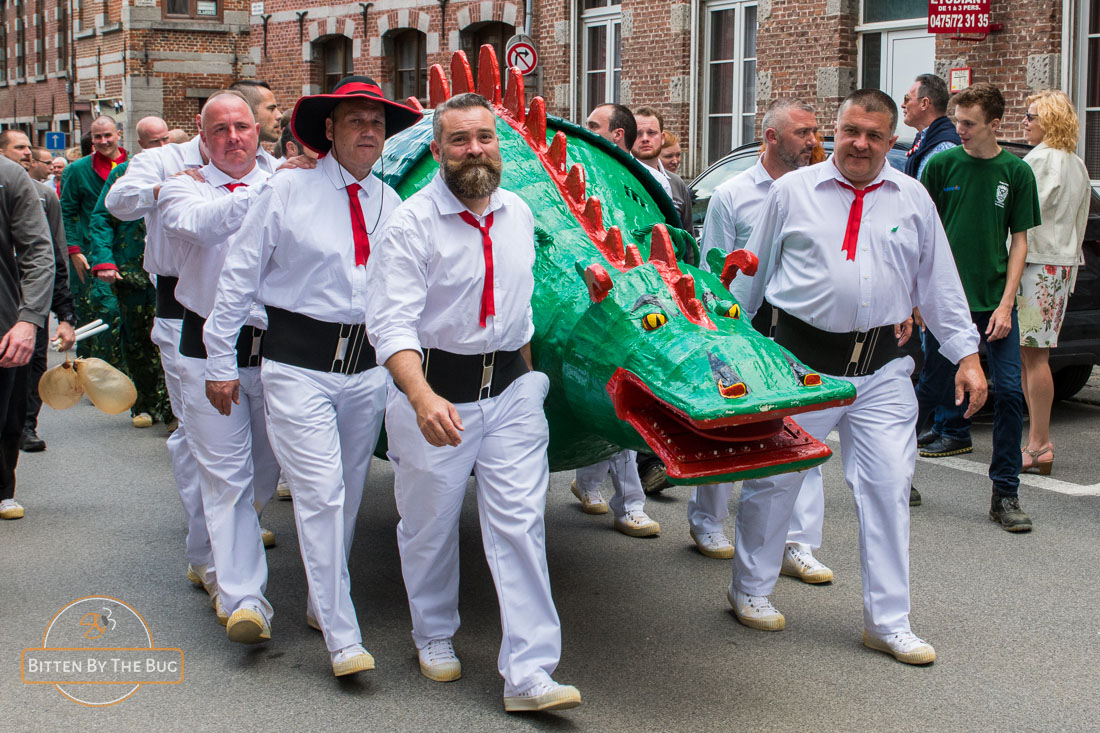 How long do the festivities last?

Although the events described above all happen in the span of a weekend’s time, the entire festival lasts much longer. In the weeks preceding and following the combat, there are various concerts, processions, exhibits and more. In the weekend after the Grand Lumeçon, there is also a ‘Petit Lumeçon’ for kids, where 12-year olds reenact the battle against the dragon, with a public of kids only. 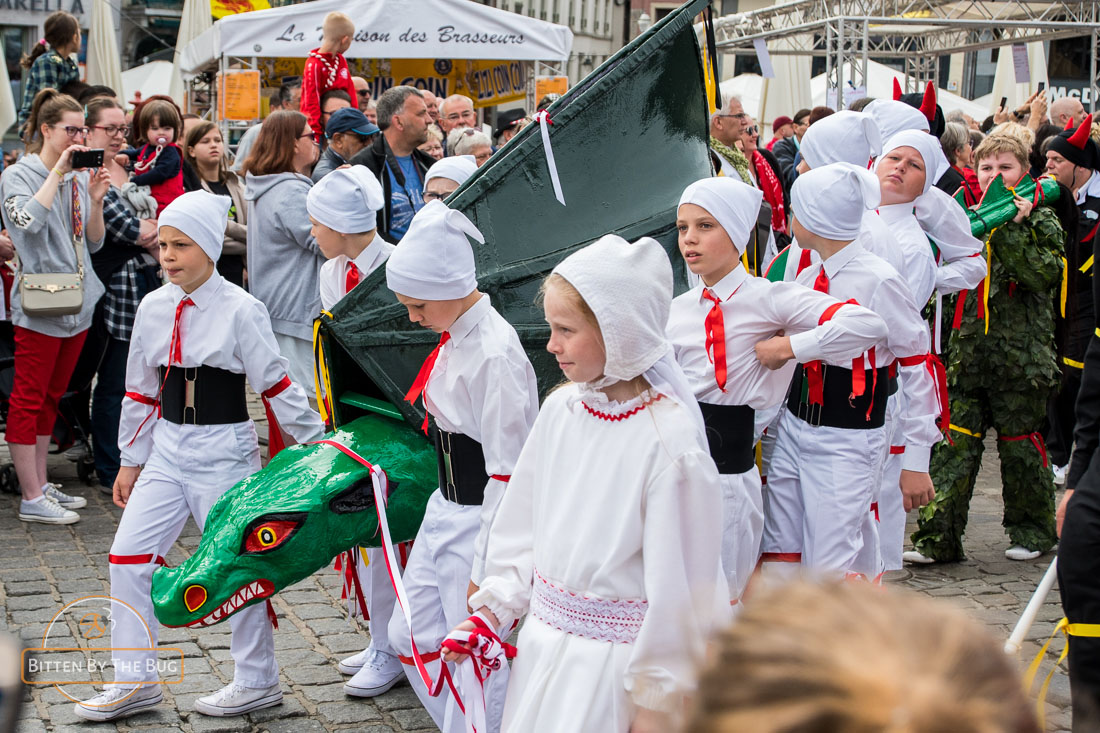 For more information about the historical background of the Doudou festival, you can check out the Doudou museum. Personally, I felt very much intrigued after watching the combat against the dragon and I felt a bit confused about the different characters and their role. The three-floored Doudou museum helped me to put the pieces together and better interpret the play I had just witnessed. There are many videos and interactive screens, which keep it light. 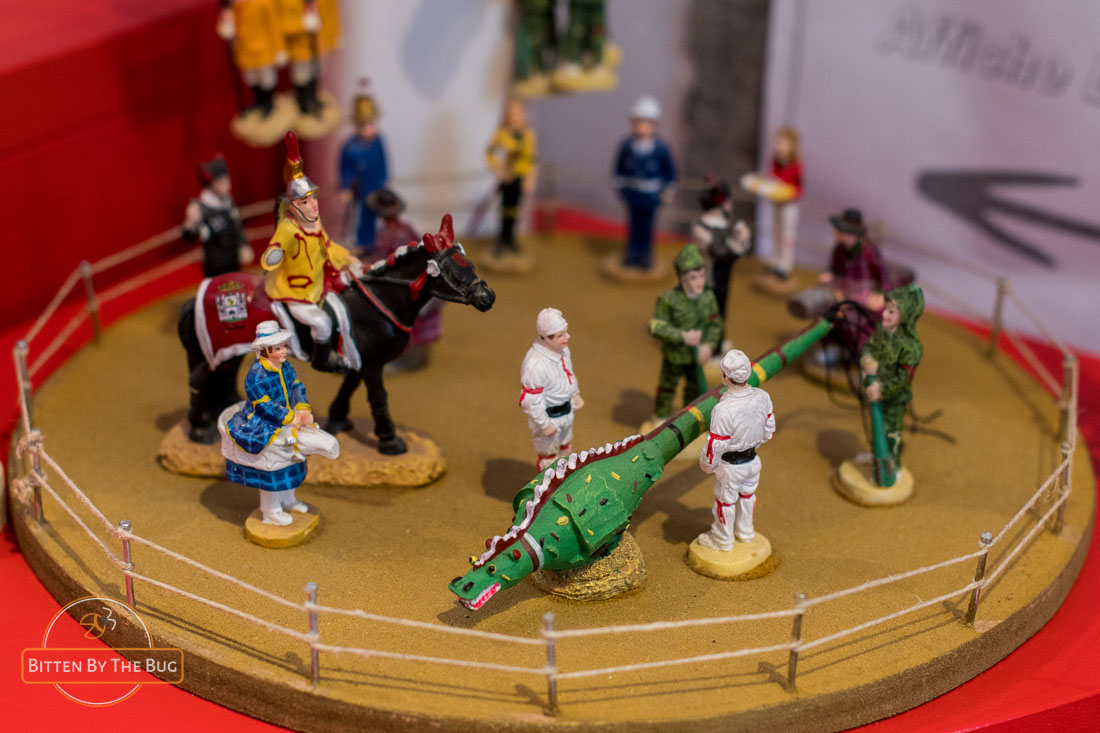 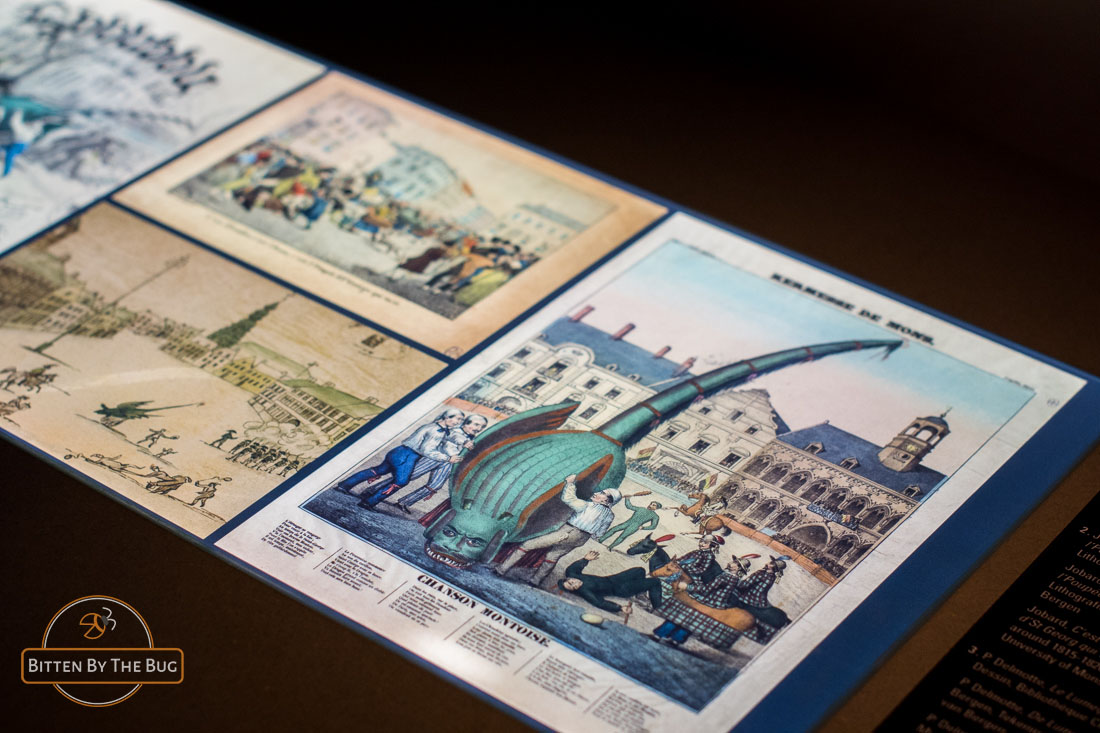 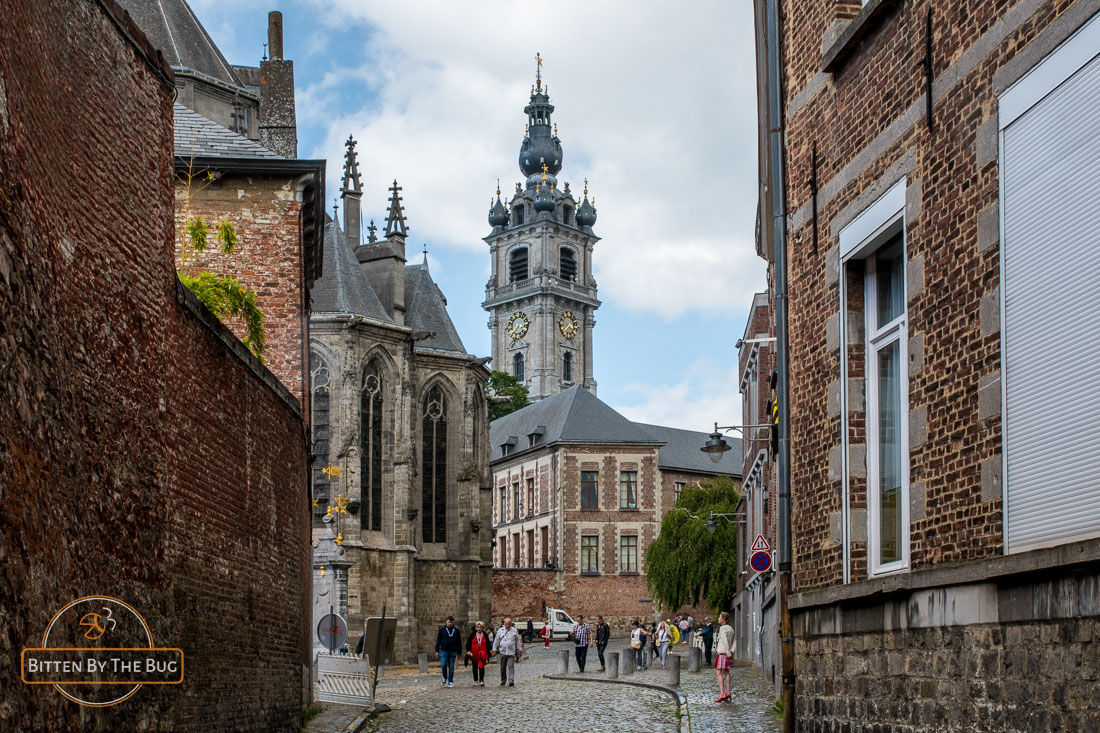 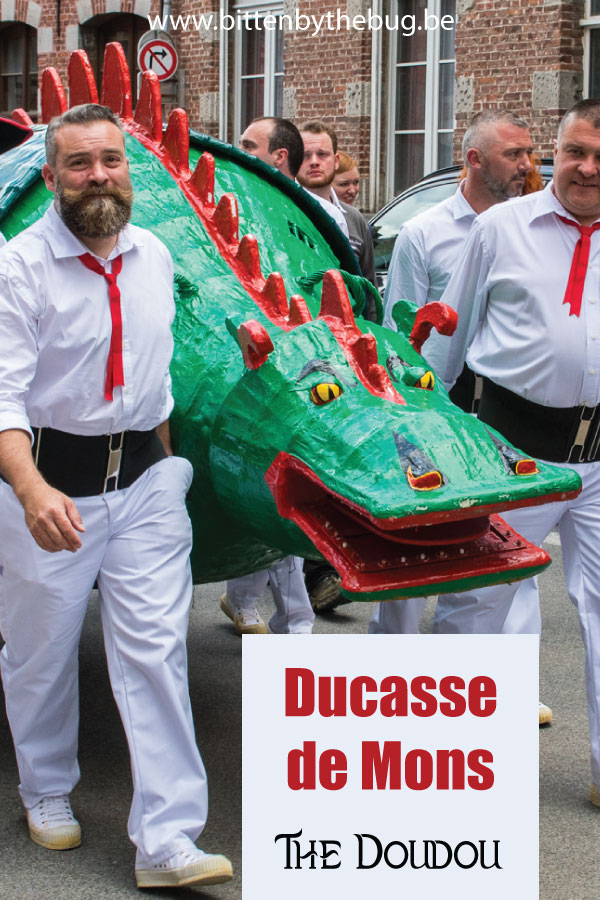 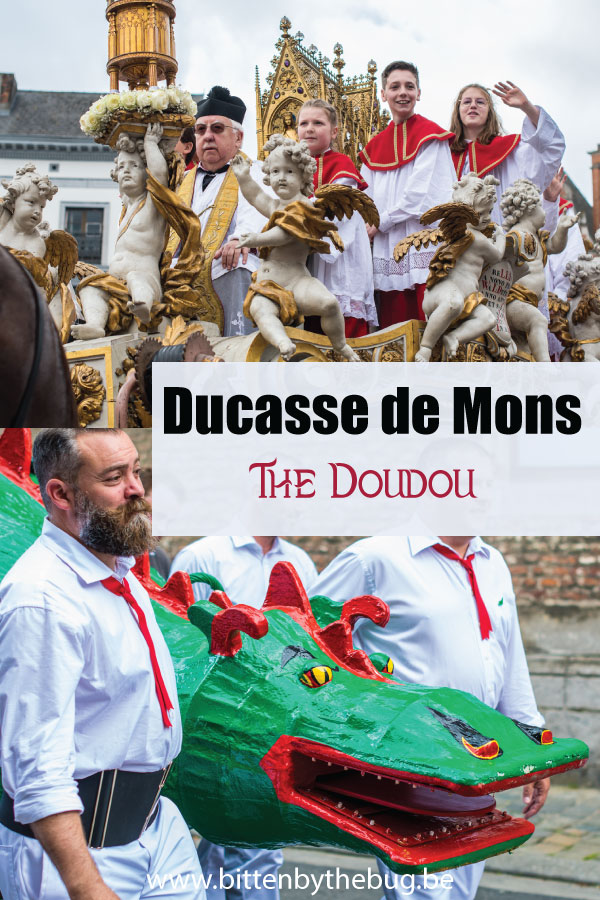